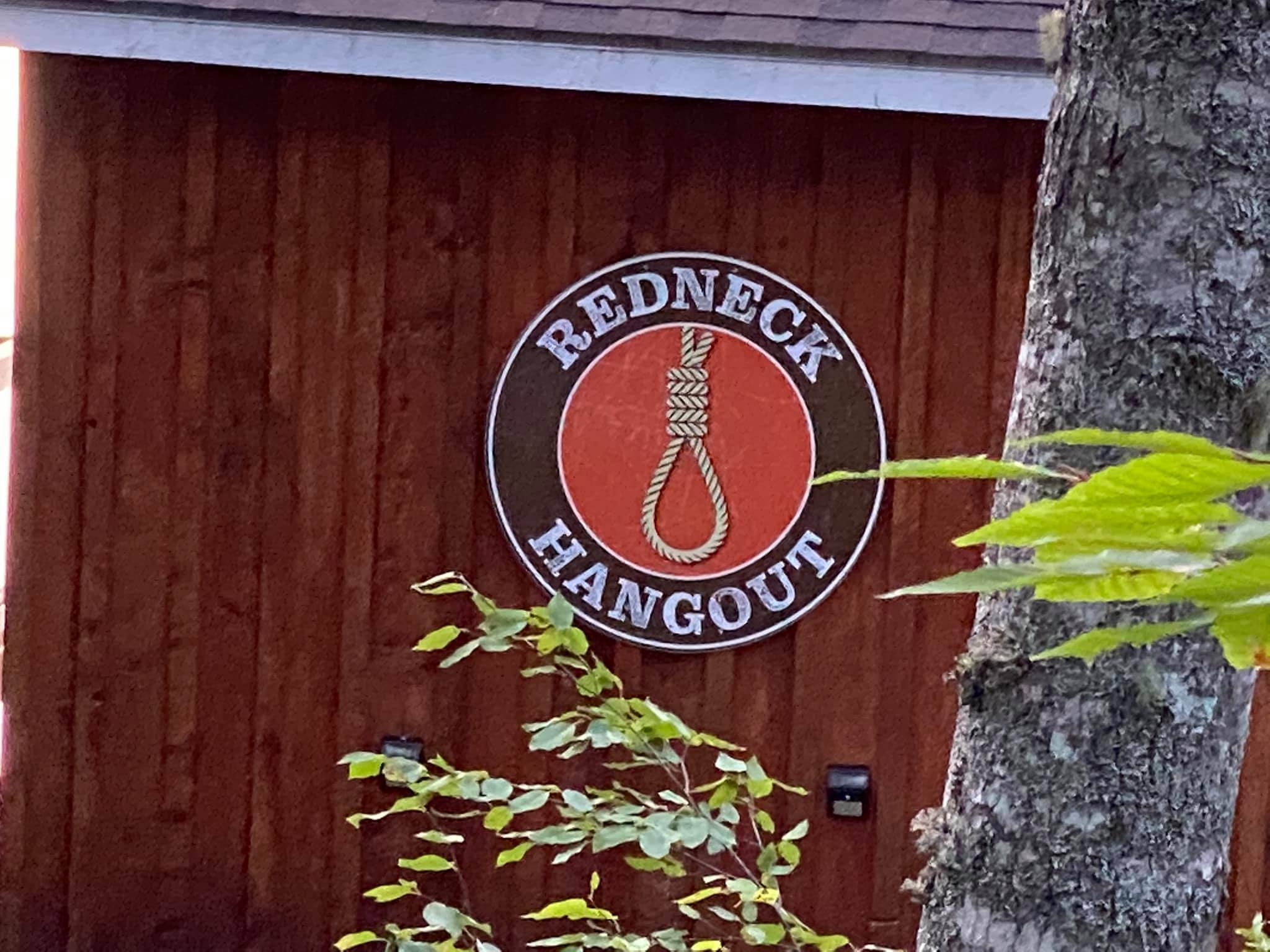 September 2020 photo of a sign that reads Redneck Hangout with an image of a noose, outside of a cottage in Greenfield, NS. Photo: Angela Bowden.

The charges stem from a complaint to Queens District RCMP in September 2020 about a sign outside of a cottage that read Redneck Hangout and had an image of a noose.

On Labour Day weekend 2020, Angela Bowden, who is Black, said she discovered the sign when visiting a group of friends at a cottage in Greenfield, about 30 kilometers west of Bridgewater.

“That sign was a clear indication to me that I was not safe in that part of the woods,” Bowden said in an interview with the Halifax Examiner on Wednesday.

“It ruined the entire visit, because you’ve got to appreciate, we were now nestled in a cottage, in the woods, up the street from an individual who is placing this sign of racist threats.”

“Unless you grew up on another planet, that sign was clear what that noose indicates.”

Bowden took photos of the property and the sign and posted them to social media. A friend of Bowden’s, Jessika Hepburn, who lives in the area, passed the information off to the police. 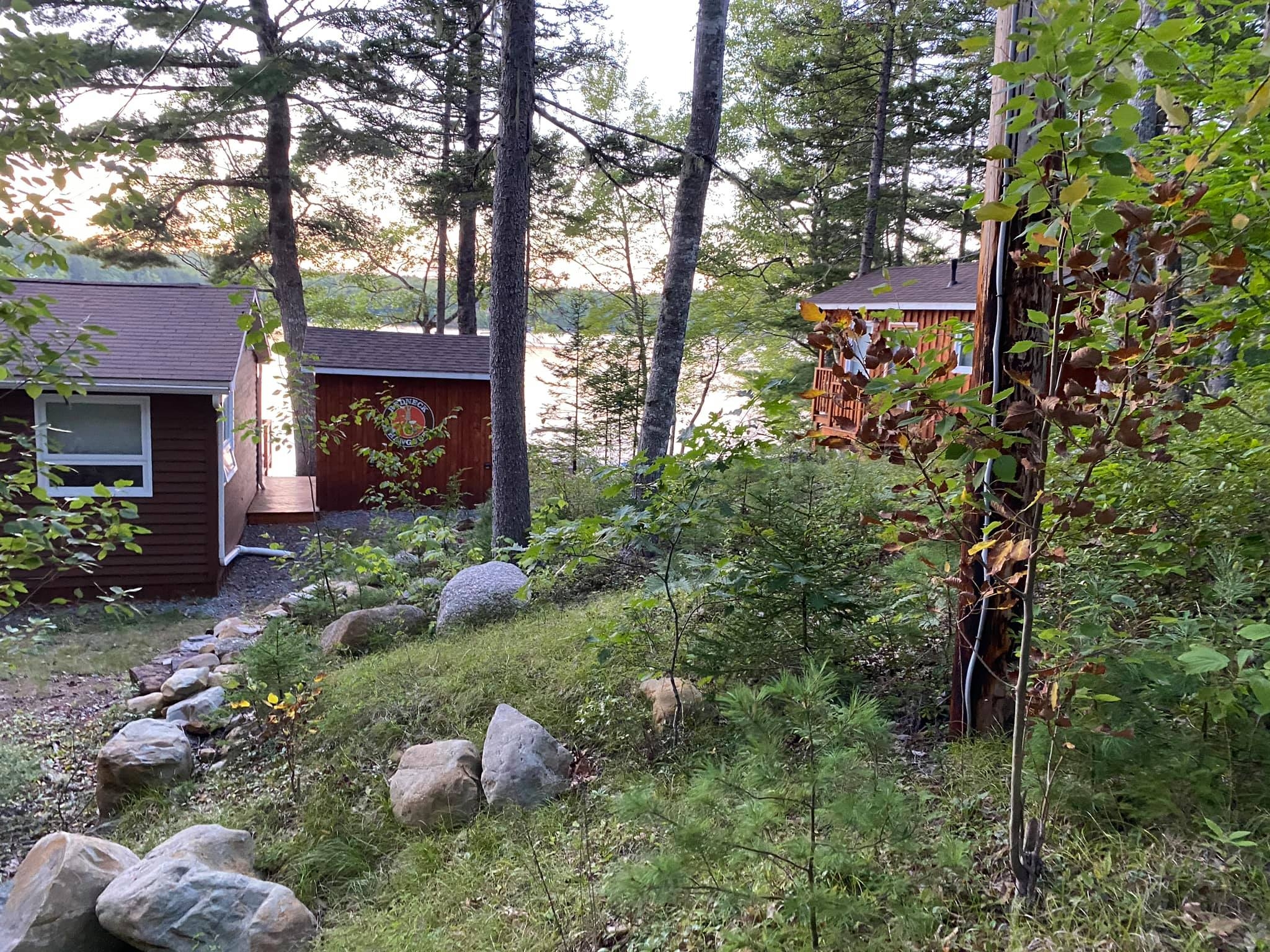 September 2020 photo of a cottage in Greenfield displaying a sign that read Redneck Hangout with an image of a noose. Photo: Angela Bowden.

In a statement released Wednesday, RCMP said Kozlowski was initially arrested just over a week after the complaint was made and then released pending a further investigation.

Bowden’s discovery of the sign also happened just weeks after a Black man, Greg Dean, and his wife, Cyndi Rafuse, spoke out about an incident in Chester.  In that case, Dean and Rafuse were with their two teenage sons on a beach when they said they were approached and threatened by white teenagers waving an actual noose. Two teens were later charged in May of 2021 with public incitement of hatred in relation to that incident.

Bowden said she recently spoke with Hepburn about the case.

“When we spoke just a few weeks ago she was talking about how she was going to follow up with them again because we hadn’t heard anything about any charges being laid or anything,” Bowden said. “It was just sort of silent.”

However, charges were laid back in March. The news came on Wednesday when RCMP released a statement moments after Kozlowski’s scheduled court appearance.

On September 8, 2020, the Queens District RCMP received a complaint that a sign promoting hatred was visible from the roadway. Officers located the sign affixed to a cabin on Beaver Tail Ln. The next day, the owner of the cabin had the sign taken down.

On March 22, 2022, Queens District RCMP charged Kozlowski with Wilfully Promoting Hatred Against Any Identifiable Group. He will appear in Bridgewater Provincial Court on May 18, at 9:30 a.m.”

“Since when does the RCMP and the police department start hiding that they’ve charged people with a crime? They certainly don’t do that when it’s Black people committing crimes,” Bowden said.

“We learned today of an offensive sign put up at Mark’s cottage without his knowledge or consent. As soon as Mark became aware, he had it taken down immediately. Putting the sign up was someone’s idea of a joke. A thoughtless, offensive joke. Neither Mark nor anyone at Wilson Equipment supports the racist message the sign communicates. We believe in equity and inclusion, and reject any messages that suggest otherwise.”

Bowden previously spoke out about racial injustice in the province with respect to the sentencing of a white man who shot a young Black man in the lung with a nail gun, and with respect to criminal charges being dropped before trial against New Glasgow Mayor Nancy Dicks where Dicks had been charged with assaulting Bowden. 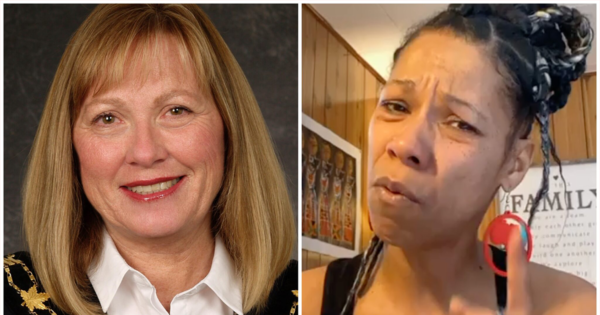 Still, Bowden said she is cautiously optimistic about the outcome of case involving Kozlowski.

“My hope is that in light of the context of the anti-Black hate that is flourishing openly and privately in this province and abroad, and the escalating anti-Black terror that’s happening in this province and globally, is that they will view this charge under that context, that we will finally take acts of threats against Black people in Nova Scotia and abroad seriously,” she said.

“My expectation is that the justice system will do their job and deliver justice.”

Kozlowski’s lawyer, Victor Goldberg, appeared on his behalf on Wednesday in a Bridgewater court to enter a plea of not guilty. Kozlowski’s trial dates are scheduled for March 27 and 28, 2023.