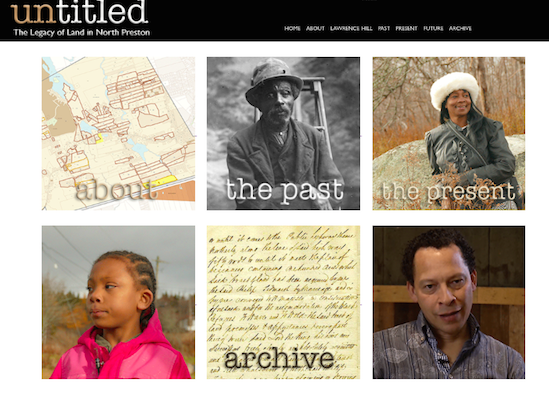 Just days after the Nova Scotia Community College journalism class published its “untitled” investigation — which explores the historic injustice done to Black refugees who were promised property in Nova Scotia but were never given title to the land they settled, and how that injustice continues to impact the residents of North Preston — the province has responded with a promise to address the issue, reports the CBC:

“We understand that the community is concerned and we are in the process of finalizing a plan to address this matter, which has been around for a long, long time in the province,” Natural Resources Minister Lloyd Hines said Thursday.

He said the province is coming up with a process to “put it to bed,” and is partnering with Nova Scotia Legal Aid and the Nova Scotia Barristers’ Society, which is offering its services pro bono.

Asked about whether the province would help fund the process, Hines said there’s an “in-kind contribution to make” but wouldn’t say if money will be set aside. He said the plan will be completed “pretty immediately.”

Congratulations to the students. They put a lot of hard work into this project, shed light on an ongoing injustice, explained the problem in an engaging fashion, and as a result brought about real change. This is what journalism is supposed to do.

For this week’s Examineradio podcast, I interviewed Erin Moore, the class instructor, and Kristen Brown, one of the students involved in the project. The podcast will be published this afternoon. 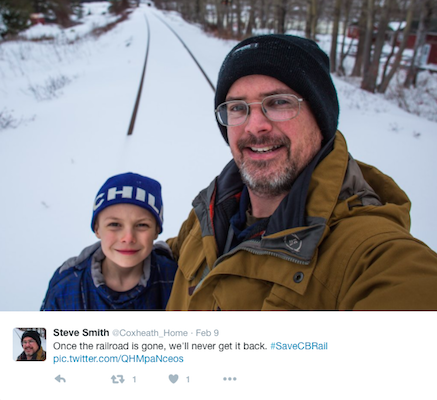 Steve Smith, putting a young person’s life in danger by taking a selfie.

The Cape Breton and Central Nova Scotia Railway rail line between Port Hawkesbury and Sydney is probably history — the last train ran on the line since December 30, 2014, and Genesee & Wyoming, the company that owns the track, will apply to abandon the line in April.

But that hasn’t deterred people in Cape Breton: activists have formed the Scotia Rail Development Society in hopes of saving the line, and to raise awareness of their cause the group sponsored a “selfie contest“:

Participants are asked to create a selfie with abandoned tracks in the background with a message stating the significance of the rail and share it with hash-tag #SaveCBRail.

The contest ended last week, and a winner will be announced Sunday. Top prize is two movie tickets and a free dinner at Governor’s Pub.

All very simple, right? Well, no:

“The Scotia Rail Development Society board was surprised to receive a letter from Genesee & Wyoming forbidding young people from taking pictures within 30 feet of the track,” said society spokesman Greg MacLeod.

In its response, the company noted under transportation laws, it is illegal to trespass on railway property, under any circumstance, even if the track seems abandoned.

“Not only is it illegal, but it is also very dangerous,” said the company spokesperson.

There is exactly zero chance that anyone will be hit by a nonexistent train, but I suppose somebody might trip on the weeds growing near the tracks, so there’s that. 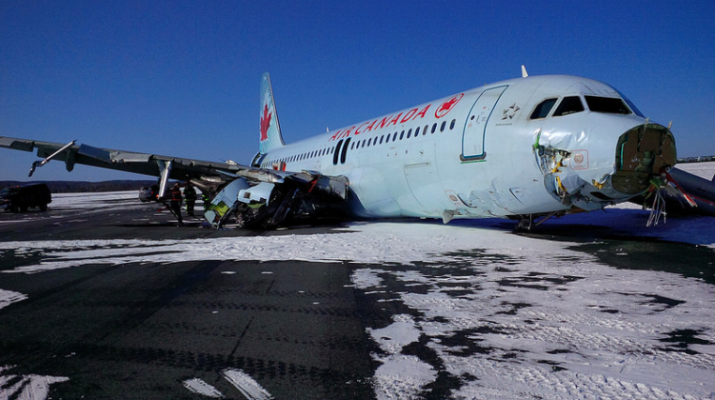 Stanfield International had 3,042,188 passengers last year, the airport said in a press release. 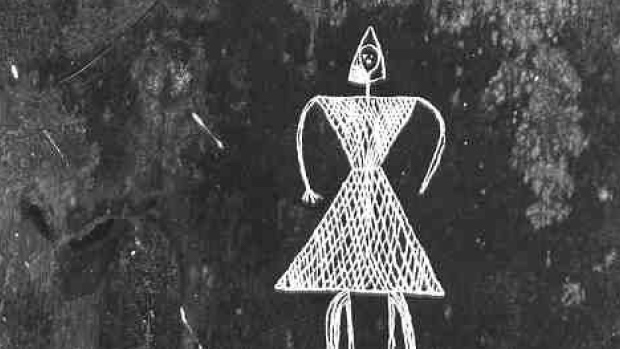 The above rock carving is found in Kejimkujik National Park. It’s the subject of an interesting article on the CBC site today. 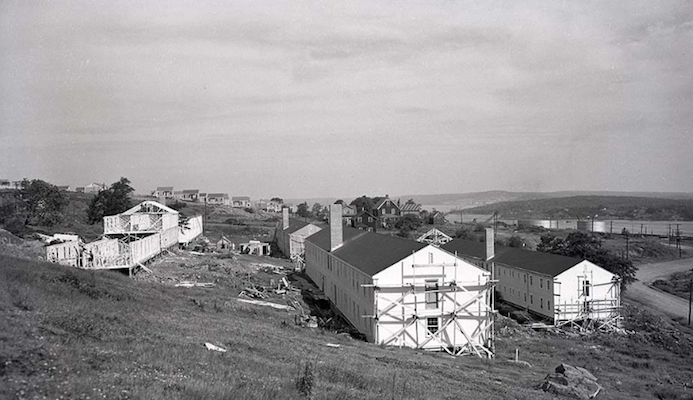 Peter Ziobrowski explains how Mulgrave Park was conceived and built.

I was out for a coffee at Tim’s and read a comment from what sounded like ‘The Economic Disaster,’ so I made my own little version.

Here’s another quiz, and if you answer correctly you can continue to live happily in the County.

1 – What will enable us to survive and thrive after five years when the amalgamation funding runs out, equalization payments change and the ‘One Pictou County Municipality’ debts pile up?

2 – Aren’t the County finances in better shape than some others?

3 – Doesn’t the Municipality of Pictou County continue to prioritize spending in small communities as necessary?

4 – What fictional reality will allow the unification without increasing taxation?

5 – Do we continue to have DOT depots here that plough our County roads quicker than most?

6 – Do we want to amalgamate and practically advertise ‘Free Money’ to attract business?    What is ‘New Scotland Business Development Inc. anyway?

7 – Do we have great volunteer fire departments that improve and develop new co-operative initiatives?

8 – Do we have local councillors who provide personalized service in an efficient and effective way?

If it ain’t broke don’t fix it!

Vote No on Amalgamation

As the rapid evolution of advanced and affordable visual sensors, which are often embedded in various powerful mobile devices, people nowadays can easily capture images or videos, or access massive collections of visual data online. This creates huge application opportunities, from sensor based information retrieval to harvesting meaningful information and knowledge from large image or video datasets via machine learning. A typical computation task for such applications is image classification, in that an image can be automatically classified and recognized against a large number of prior tags or textural class descriptions, either generic or application specific, via machine learning or manual annotation process. Many image representation methods were introduced to tackle this task, commonly categorized into Local Image Descriptors, Global Image Descriptors, and Learned Network Representations. While some of these methods achieve promising results, they still ! suffer from the Semantic Gap, i.e. lacking higher level semantics within the representation due to relying on low level features and neglecting semantic properties, or coded in learned network without transparency. As a result, it is difficult to apply such representation to support visual semantic based reasoning for knowledge based systems. In addition, the existing representation methods often require to compute a large number of parameters for classification, which may add a prohibitive cost to a real-time image or video analysis and reasoning system.

In this research, we introduce a new image representation method, based on N-games of Perceptual Shape Tokens (PST), organized in Shape-Spatial Pyramids for coding both local and global shape semantics of images. The PST can be used to form multiple layers of semantics of image representation for minimizing the semantic gap between low level image representation and its class description. PST are the baseline visual words for creating higher level semantic visual descriptors. A Shape Pyramid consists of multi-levels of visual words obtained based on the N-gram notion of PST. It also adds semantics to the image representation by considering the syntactic relationships between N-gram PST words. Considering that most of the current BoVW based methods do not apply the spatial layout and regularities of visual words in images, we integrate the Spatial Pyramid with the Shape Pyramid for the shape-spatial distribution information of image semantics. The proposed method produces improved classification results on Wang and Caltech datasets compared with the state-of-the-art methods.

Have a Tarantula Nebula: 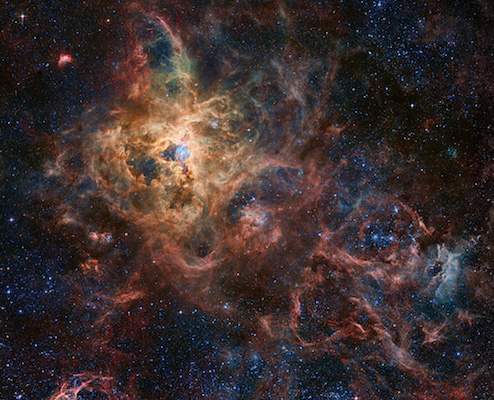 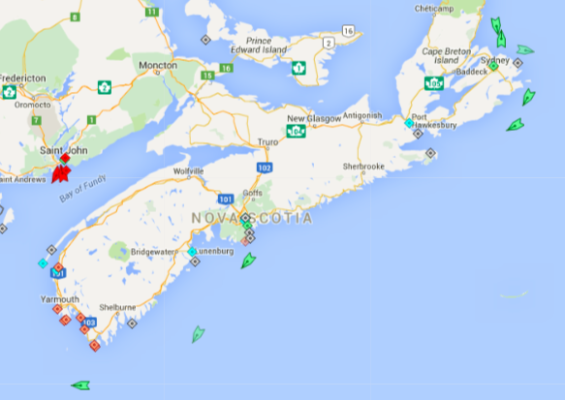 The seas around Nova Scotia, 8:20am Friday. Map: marinetraffic.com