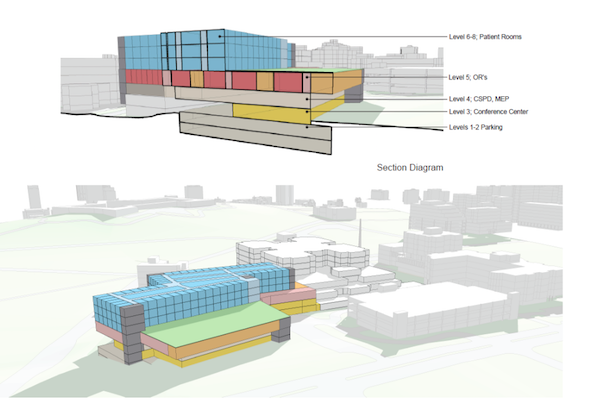 Architectural plans for a five-storey addition to the Halifax Infirmary that would allow for the decommissioning of the Victoria General building.

In the wake of the Victoria General flood and resulting delayed and cancelled surgeries, there’s been renewed talk of replacing the hospital. But a reader reminds me that plans for upgrading Capital Health’s facilities — including “decommissioning” the VG — have been on the books for many years. “The overall plan, including the business case and costs, were provided to government for approval [in 2013],” reads Capital Health’s Project Overview page.

In fact, construction of a five-storey addition to the Halifax Infirmary — which would allow for the decommissioning of the VG — was to begin next year, but those plans seem to have been shelved.

“My memory was that the Liberals were going to move on things quickly irrespective of the single authority needing to be compiled first (that was just after they were elected),” says the reader. “My sense is they are trying to figure out how to rename P3s to something more palatable.”

That sounds right. The cardinal sin for modern Nova Scotian governments is to increase the provincial debt, and policy is driven by that. And as the CBC reports:

But a timeline focusing on upgrading Victoria General won’t be provided until Glavine meets with the Health Authority. [Health Minister Leo] Glavine said any rebuilds will be “the biggest cost that we would have incurred in a quarter of a century in this province.”

There you have it: It’s going to cost a lot of money, so we have to figure out a way to hide the costs, or at least shuffle the budgets so the cost doesn’t appear on any “debt” register. Better trot out a public-private partnership, slap a new buzzword on it, and call it “innovation.” That’ll fool them.

Of course, just as with replacing the computer software and hardware that runs the public registries, any financing scheme for replacing the VG that doesn’t involve borrowing the money at historically low interest rates will necessarily be far more expensive, just the expense will be hidden in budgetary smoke and mirrors or new fees on users.

This is silly. There’s good debt and bad debt, and the debt incurred to replace a crumbling hospital is clearly a good debt. Just borrow the money and build the thing, and defend increasing the provincial debt to do so. It’s the right thing to do.

Going to the freedom of information forum last night reminded me of the decades worth of anti-poverty forums I’ve attended: every year, earnest people get up and tell us about new concepts and great ideas and new legislation and the wonderful smart young people with boundless energy and we will finally, finally start seriously addressing the problem. Everyone leaves the forum optimistic and hopeful and ready to throw their support into whatever the latest buzzwords are, and then nothing happens to the poverty rate. Or it gets worse. The solution, seems to me, is to quit with the meetings and buzzwords and newly purposed organizations and even the wonderful young people, and just seize the wealth and redistribute it already. We either do it with progressive taxation and wealth levies, or the peasants do it with pitchforks and torches.

Much the same with freedom of information forums. I’ve been attending these things forever. And the information advocates and government bureaucrats and the politicians all say the right things and promise a bright future, but I walk out the place and find that I still can’t get a decent response from my FOI requests. I don’t know what the cut-through-the-crap solution is, but I’m ready for the pitchforks and torches.

The Chronicle Herald asked all Halifax councillors and the mayor if they intend to run for reelection in October. That’s October, 2016. Here are their responses.

No great surprises, at least to me. Lots of councillors being coy.

At 1:37 p.m. on September 28, Halifax Regional Police responded to an accident involving a car and a pedestrian using a mobility scooter. The scooter was traveling in a crosswalk at Gordon Avenue in Dartmouth at the entrance near Shoppers Drug Mart. The vehicle was travelling into the parking lot from Gordon Avenue and collided with the mobility scooter, knocking the rider to the ground. There were no injuries and the 75-year-old woman who was driving the vehicle was issued a ticket for failing to yield to a pedestrian in a crosswalk. 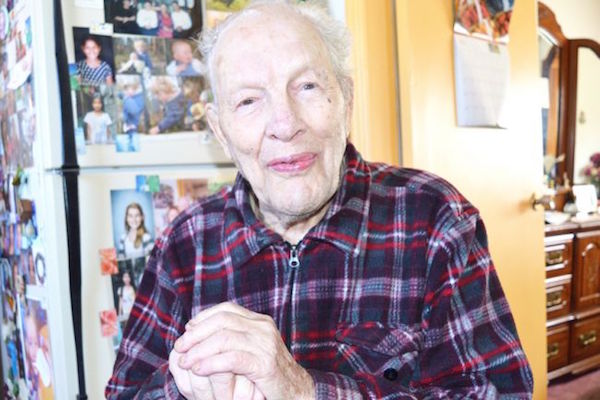 Sharon Montgomery-Dupe has a nice piece in the Cape Breton Post about Danny Gallant, who turns 100 years old on October 8. The trick to writing a good profile is capturing that poignant or telling moment, and Montgomery-Dupe does it here:

“I felt like I was a millionaire, that was a fortune back then.”

He was involved in seven mining accidents over the years, including one in which he injured his back.

He said mining was his passion.

“I loved mining, there was something different every day,” he said.

“The day I retired I came home, put my lunch can on the table and I cried and I cried.”

Back in the day, an old college buddy, a journalism student, wrote a profile of a university administrator. He missed a huge story because he made the mistake of not going to the courthouse and doing a search of the administrator’s name. The administrator subsequently was caught up in a sexual harassment scandal involving students, and my buddy would’ve at least caught a glimpse into those problems had he pulled the guy’s court records. Ever since, I’ve told myself, and now I tell journalism students, no matter who you’re profiling — an upcoming rock star, a businessman at the Chamber of Commerce, Mother Superior at the Orphanage of the Poor Amputees, whoever — pull their court records.

I’ll presume Montgomery-Dupe pulled Gallant’s court records and found nothing at all — he’s not a serial killer or internet fraudster. Instead, he’s that rarity of among us: a gentle soul who’s done right by his family.

1. Spending money on bikes… for cars

Erica Butler discusses the proposed $2 million “flyover ramp” that would improve the bicycle route over the Macdonald Bridge, and makes an important point:

Let’s not kid ourselves here. Fixing this bridge access for both pedestrians and cyclists could be dirt-cheap. It’s the need to maintain optimal car traffic flow in our city that has yielded the $2 million or more price tag here.

This money, if it ever does get spent in 2017, is being spent on cars, not bikes. 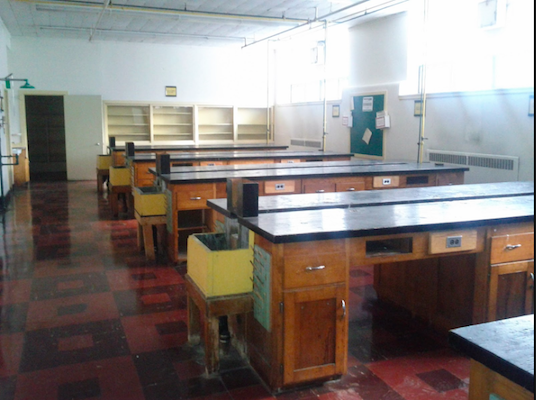 Neal Ozano was the editor of the Halifax edition of OpenFile, the defunct news site that did a lot of things right but had no workable business model. (That’s not Ozano’s fault.) With Ozano’s OK, I stole the name “Morning File” from the early morning news recap that he and his crew published every day.

Ozano has since moved on to Edmonton, but he still follows Halifax. Over the weekend he revised his old Halifax-themed blog and published a photo essay of the old St. Pat’s High School. He writes:

I never went to St. Pat’s, but I had a chance to explore it once while clearing out some storage areas for the school board. At the time, everything was functional and intact. I’m not sure many people had a chance to go inside this Windsor Street building after we did. It’s a shame it had to go; with what I’m sure would have been zillions of dollars of work, it could have been an awesome venue. As it stood, the theatre rigging and lighting looked sketchy and not just a little deadly.

Looking around Ozano’s old blog, I found this post from 2005 headlined “Preview,” and it really does seem to encapsulate the next decade of his life:

Yeah. I should have kept posting. I’ve seen sunshine, and I’ve seen rain, as we all seem to have seen, or something.

I was hired on full-time at my newspaper, then I was almost fired from the newspaper for getting the name of a girl who died, and the name of the mother of another girl who died wonderfully incorrect. Then I met a new girl — and that’s got ramifications beyond your typical B-G situations. Mostly, I’m just saying I’m still awesome, but I can’t really fuck around and write posts at work any more. Uhh… except this time. Not that anyone pays attention to me.

Someone should start a Bring Neal Back to Halifax crowdsourcing thing.

The evidence from Monday’s front page of the provincial edition suggests that The Chronicle Herald is, at best, ambivalent about its responsibility to the public in what is, at least nominally, a democracy, and the lesser two of the front-page stories do have some importance for provincial and federal politics. The lead story, however, detailing the luck of the winner from Saturday’s Inverness Chase the Ace event, and rounded out by a large, colour photograph, is utterly irrelevant.

Exercise for the reader: think of five things more important for your future. Only the editor can explain this decision to trivialize the front page and promote gambling (“final draw set for next week”), but Noam Chomsky’s observation that the essential purpose of modern media in corporate capitalism is to distract the public from meaningful participation in political reality seems a propos.

North West Planning Advisory Committee (7pm, Hammonds Plains Consolidated Elementary School cafeteria) — the Edible Matters bakery at 1355 Hammonds Plains Road wants to open a pub. The city recently changed the zoning for the area to allow for pubs, but this is a site-specific application. 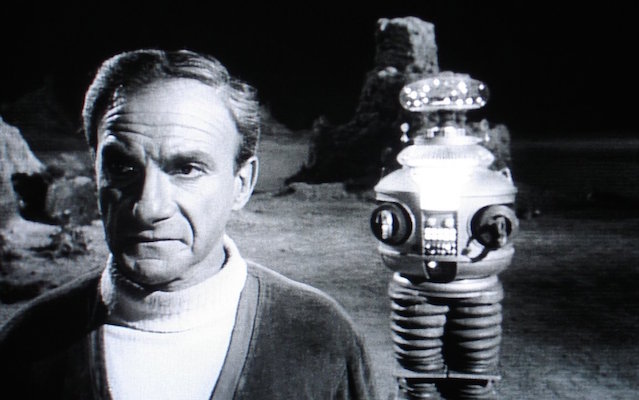 What with the return of the Suspicious Packages, the Halifax Regional Police Department have put out a tender for yet another robot.

Standing Committee on Human Resources (10am, Granville Level, One Government Place) — the Nova Scotia Post-Secondary Education Coalition will be discussed.

will kick off with a panel discussion, moderated by University of King’s College science historian Ian Stewart, followed by an opportunity for questions and discussion. The panelists are:

A hilarious, honest, no-holds-barred approach to sexuality education that uses puppets, props, interactive activities and audience participation to address misinformation head-on while enhancing sexual awareness. The talk will start by covering a variety of sexuality topics including but not limited to Sex, Love, Healthy Relationships, Communication, with a focus on Consent & Respect.

Forensic Investigation of the 17th-Century Chesapeake (Tuesday, 7pm, McNally Theatre Auditorium ) — Douglas Owsley is the division head of Physical Anthropology at the Smithsonian’s National Museum of Natural History — he’s the real life Mr. Bones! — and he’s going to talk about, I don’t know, something about the 17th Century Chesapeake. 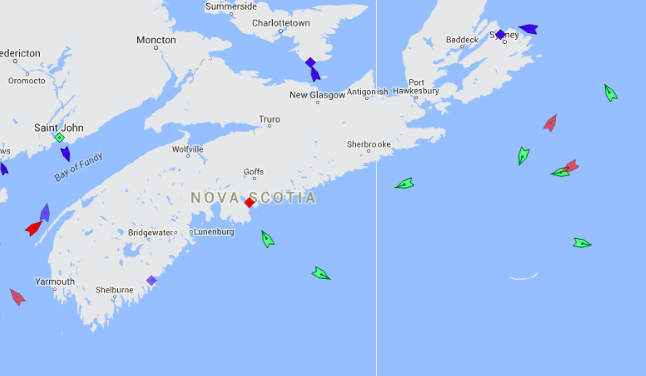 The seas around Nova Scotia, 8:40am Tuesday. Map: marinetraffic.com

The cruise ships Liberty of the Seas (up to 3,634 passengers), Pearl Mist (up to 450 passengers), and Norwegian Gem (up to 2,394 passengers) are in port today. The Seabourne Quest overnighted in port, and sails today.

I’m looking for a freelance reporter living in Sydney who can do some research for me.