In July 2014, the RCMP received a complaint of a possible fraud in the amount of several hundred thousand dollars against the Nova Scotia Department of Economic and Rural Development and Tourism.

Ms. Kelly is facing several charges including one count of Fraud Over $5,000 and nine counts of Uttering Forged Documents. She appeared in Amherst Provincial Court April 25 and will be returning to court on June 23, 2016.

I detailed a PricewaterhouseCoopers audit of the Cumberland Regional Economic Development Association here, and made the additional point:

We see this time and again: Anything labeled “economic development” gets a pass from the rules everyone else has to follow. It happened in the Commonwealth Games fiasco. It happened when Trade Centre Limited produced completely bogus delegate projections (and therefore economic impact projections) for the new convention centre.

This is what “economic development” schemes do. There are a number of reasons for it. First, and fundamentally, the contradictory purpose of these things is almost guaranteed to lead to corruption, just as HAL 9000’s contradictory programming led to that whole “lock Frank out of the spaceship” thing: the primary purpose of the economic development agency is to break the rules. We have an established tax structure; Nova Scotia Business, Inc works around it to give “payroll rebates” so those tax rates don’t apply to favoured companies. Concert promoters are many things, but at heart they’re business people who have to live by the rules of the market; bring a government partner in, however, and market discipline no longer applies. The job of regional development agencies is, in essence, to be a deal-maker, to work the room, slap a lot of backs, grease a lot of palms, hand out the government bennies, like a coke dealer working a night club. It’s no wonder these things go off the rails.

Second, the “economic development” agencies attract grifters and players. They see where the money is, and want to place themselves as the conduit, with all the social benefit that comes with it. They’re not exactly sticklers for rules.

Third, and I think in the end most important, is we’ve so capitulated to the rhetoric of “economic development” that we no longer can control it. Anyone who questions “economic development” is a “naysayer,” or a misanthrope bent on destroying his or her community. Since we’ve muzzled all the watchdogs, the crooks have the run of the place. 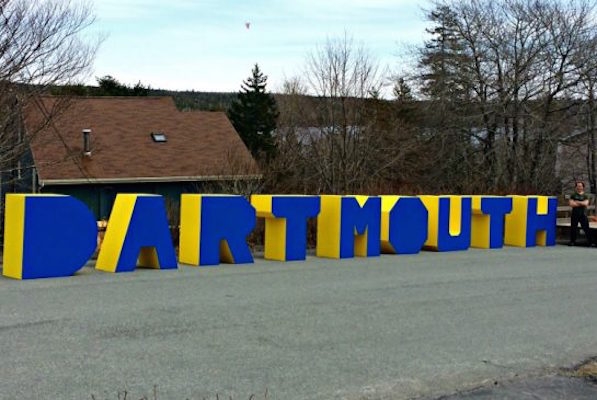 Folks in West Cole Harbour really get worked up about the name of the place.

“Although it hasn’t yet had its official unveiling, a large sculpture designed to celebrate Dartmouth’s community pride already has people talking,” reports Yvette d’Entremont for Metro:

The four and a half foot tall letters spell out “Dartmouth,” and each letter weighs between 120 and 150 pounds. The bright blue and yellow letters were chosen to reflect the colours of Dartmouth’s flag.

When erected, the sculpture is about 50 feet in length.

“It’s a moveable piece, very sturdy and built to be outdoors. Obviously it can be moved around on a grassy knoll or a concrete area or wherever for various events,” said artist Christian Toth.

“It is meant to showcase that section of the city. A lot of people are proud Dartmouthians. I think it works. Everyone is really excited about it and it has been getting some excellent response.”

The problem with having moveable letters is that Haligonian Hooligans or other such pranksters might have some fun with anagrams. 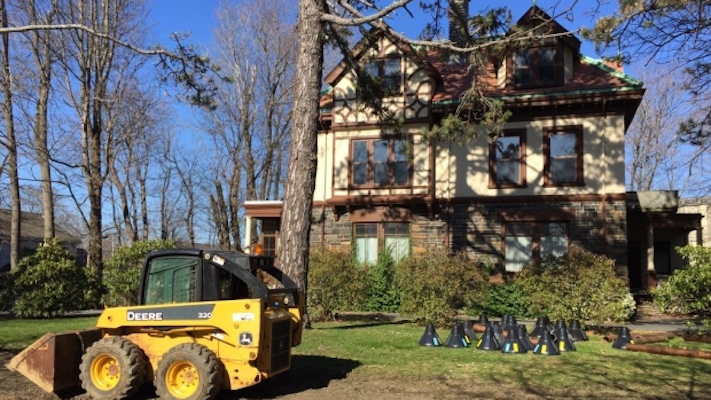 A developer is preparing to demolish the “wedding cake house” at 851 Young Avenue.

It’s odd that no one is saying who the developer is. Land purchases and demolition permits are public record. 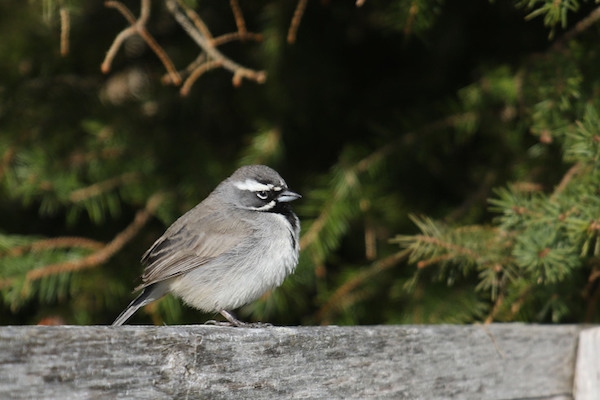 “Maritime birdwatchers are enjoying a rare treat this week, with an unexpected visitor arriving in the border area between New Brunswick and Nova Scotia,” reports Kashmala Fida for the CBC. “The black-throated sparrow is native to the southwestern United States and Mexico, and is sometimes called the desert sparrow.”

You can read birders getting excited here. 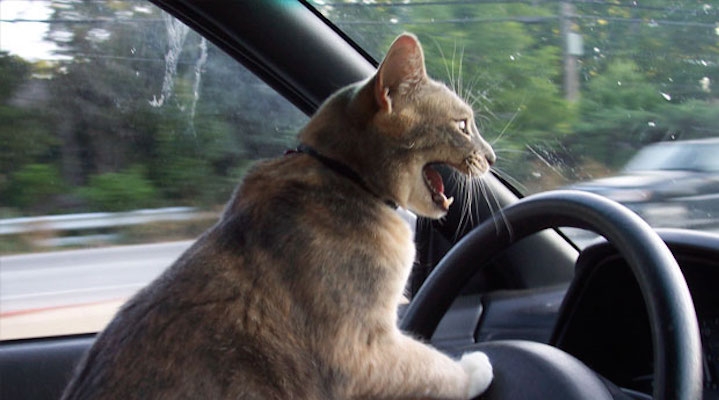 “After 10 years of patiently waiting for Nova Scotia’s ghost cougar to appear, a determined researcher working in the dark forests of Kejimkujik National Park is calling it quits,” reports Michael MacDonald for the Canadian Press:

The elusive cougar has long been a source of intrigue and myth in Nova Scotia, and even inspired an episode of the Trailer Park Boys.

But Chris McCarthy’s decade-long quest has failed to turn up any evidence that eastern cougars still roam the big park in western Nova Scotia.

“We haven’t had any success in detecting any, and so after a decade we think we’ve put enough effort into it for now,” says McCarthy, the park’s manager of resource conservation.

As is typical, Chris Parsons has a thoughtful essay on the recent killings in Halifax. It’s really not possible to excerpt it, so just read the whole thing. 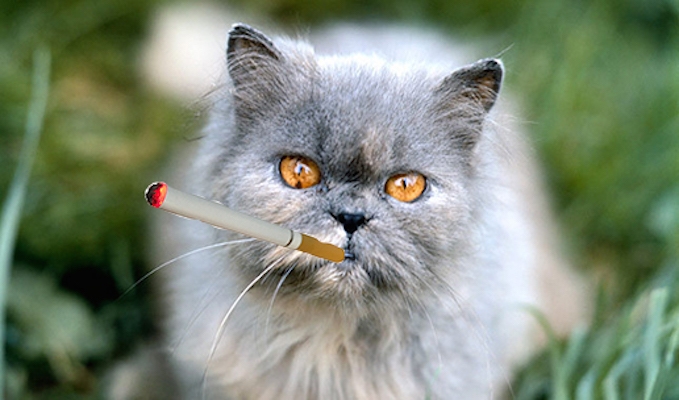 But feral cat and lawyer, Johnnie Clawchran, says feral cats in the City were never consulted about the TNR program.

“These are our cat genitals we’re talking about. How would you like it if some feral cats rounded up some humans, and took away their reproductive rights?” asked Clawchran.

I’m from the government and I’m here to help.

The cheque’s in the mail.

The status quo is a myth: Nothing stays the same. The only question is whether you study the change, lead the change, fight the change or just get swept up in the change. It really doesn’t matter how much you like or loath change, it does not require your permission or participation. Will you be a follower, a leader or complainer?

Amherst is not the same today as it was four years ago and it will be significantly different in another four years. If we keep on the same path the population will be older, taxes will be higher. Following this trend, there will be fewer people and even fewer young people. Amherst and the rest of Cumberland County can trudge along for the next 10 years just as we have for the past 10 years.

That is as long as we don’t get a major change thrust upon us. Perhaps a major employer seeks greener pastures or maybe it is just a death by 1,000 cuts.

With fewer people and less revenue, things will change. Change does not require permission. Amherst will change – for the better or for the worse.

One of the most substantial changes which has been thrust upon us is the loss of the Amherst correctional facility. During my first term on council, this was the first significant issue. The NDP government of the day determined it was in the best interest of all Nova Scotians to move those jobs and bunch more to the riding of their justice minister.

We don’t get a do over, so it is only speculation about what Amherst and Cumberland County would look like today if the new facility had been constructed in Springhill and the 80 plus good paying jobs were located here and not in Pictou County. It is also only speculation that the result would have been different if Cumberland County had been able to speak with a united voice from the very beginning.

Things changed, despite the fact that the people of Cumberland County did not want it!

Shared services is another myth which has been around for decades. While Amherst and the Cumberland County have had some success with shared services with the regional landfill, and fire services to a lesser a degree, any significant sharing of services for the benefit of all has remained elusive.

Despite the fact that hundreds of thousands of dollars and person hours has been spent on this myth over the past number of decades, it remains an elusive topic of continued study, consultant fees and in-camera discussion.

Meanwhile, other things have changed. Our population is smaller, and it is also older. There are fewer young people here than there used to be, and we can no longer shop at Dayle’s, Shoppers Drug Mart and McCully Market. Our homes aren’t worth what they used to be and countless people have left Cumberland County. One other thing that has changed is your property tax bill. Things change.

Oct. 15th is municipal election day in Nova Scotia. This may very well be the last chance for the good people of Cumberland County to have a real say in what happens to us over the next four years. In my opinion, we can either board the regionalization bus, or it will hit us and the driver will be from Halifax.

Transportation Standing Committee (1pm, Halifax Council Chamber, City Hall) — The committee will be discussing the 2016/2017 Pedestrian Safety Action Plan. It will also be addressing a request made by the Active Transportation Advisory Committee to complete the Trans Canada Trail connection in Halifax by December.

MERC Conference (9am, Marion McCain Arts and Social Sciences Building, Dalhousie University) —  This conference will give recent graduates a chance to hear about local research initiatives in the fields of engineering and applied sciences. Tony Wright, general manager of the Fundy Ocean Research Centre for Energy (FORCE) and this year’s keynote speaker, will be presenting an update on the company’s recent activity, as well as “the next steps to pave the way for the installation of the first grid connected turbines in Canada and the R&D still required for the industry to move forward.”

How Small, How Far Away (8pm, Studio One, Dalhousie Arts Centre) — A production written by Mike Geither and Zuppa Theatre Co.:

It is the second week of summer 2010 in Halifax, Nova Scotia. On Monday, a military translator returns home from Afghanistan to news of a family crisis. On Friday, his sister will host a surprise welcome-home party. In the meantime, ordinary life happens: he revisits old haunts, catches up with his best friend, meets a schoolteacher from Texas and thinks about buying a shirt. Created with Cleveland-based playwright Mike Geither, How Small, How Far Away is about the simple, vital human connections that make up our day-to-day. 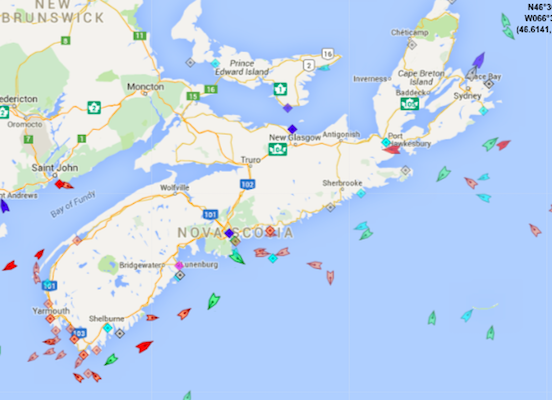 The seas around Nova Scotia, 8:35am Thursday. Map: marinetraffic.com

The plan is to get a big investigative piece written by a freelancer published today.