You are here: Home / Featured / Dalhousie researcher finds giving people who had a first dose of AstraZeneca a second dose of Pfizer may have big benefits

Thousands of Nova Scotians vaccinated with AstraZeneca have a pointed interest in what their second jab will contain. They’ve been waiting for scientists and public health officials to determine both the safety and effectiveness of mixing AZ with a second dose of either Pfizer-BioNTech or Moderna. (Full disclosure: Examiner editor Tim Bousquet and I got shots of AZ.)

Public Health in Nova Scotia has been waiting for guidance from the National Advisory Committee on Immunization (NACI) before deciding whether to offer this group a second dose of AZ or to “mix and match” with a follow-up shot of Pfizer or Moderna. Yesterday, Manitoba decided it couldn’t wait for long-anticipated results of a large UK study and authorized a second dose of either Pfizer or Moderna for all AstraZeneca recipients.

Scientists around the world have been working overtime to figure out the most effective and safe combination of first and second shots. They include virologist Dr. Chris Richardson and several graduate students in a microbiology lab at Dalhousie University. They’ve become expert at inserting the instantly recognizable COVID-19 spike protein into “safe” animal viruses which they then work with and model. Their focus is to develop reagents and processes to be used in larger clinical studies, such as the one for which Dr. Joanne Langley at the Canadian Centre for Vaccinology in Halifax is recruiting 2,300 people to test second doses.

In the meantime, a Dal experiment involving two human subjects has yielded promising results. A 66-year-old man and a 66-year-old woman received a dose of Pfizer 33 days after their initial Astra Zeneca shot. Richardson and Dalhousie graduate students Ali Ostadgavahi and Ryan Booth, together with members of the Canadian Center for Vaccinology, studied antibodies produced in blood samples taken from the subjects. Richardson says both samples showed a “dramatic increase” in the antibodies that attack the spike protein of the COVID-19 virus following vaccination — especially after their second shot. Significant increases were observed just 13 days after the second vaccination. The results of the pilot study have been submitted and will soon appear in the Journal of Infection in Developing Countries.

“Although we measured antibody responses in just a few subjects, our discovery in the lab demonstrates a dramatic trend for protective antibody production,” said Richardson. “This validates the decision by Dr. Strang and other provinces to decrease the time to two months between first and second vaccinations, a move that could greatly accelerate the battle against COVID-19. It also shows that a mixed AZ and Pfizer vaccination schedule/protocol is very effective in generating neutralizing antibodies. This is exciting!”

Richardson said he thinks it’s important to share the good news in order to “expedite” vaccine scheduling and generate enthusiasm among people who may have felt hesitant about getting a second shot that involves a different vaccine from the first.

As part of the experiment, the Dal researchers used a model virus concocted in the lab that contains the COVID-19 spike protein and a green fluorescent protein from a jellyfish (yes, jellyfish). When cultured human kidney cells were injected with the model virus and placed under a UV light, they glowed green in the dark. Following the second dose of Pfizer, less fluorescent green light was emitted and the photographs appear darker. This was because more antibodies against COVID were produced, slowing down infection in the cells. This visual representation shows how the combination of vaccines worked in these two people to produce “neutralizing’ antibodies against the coronavirus. 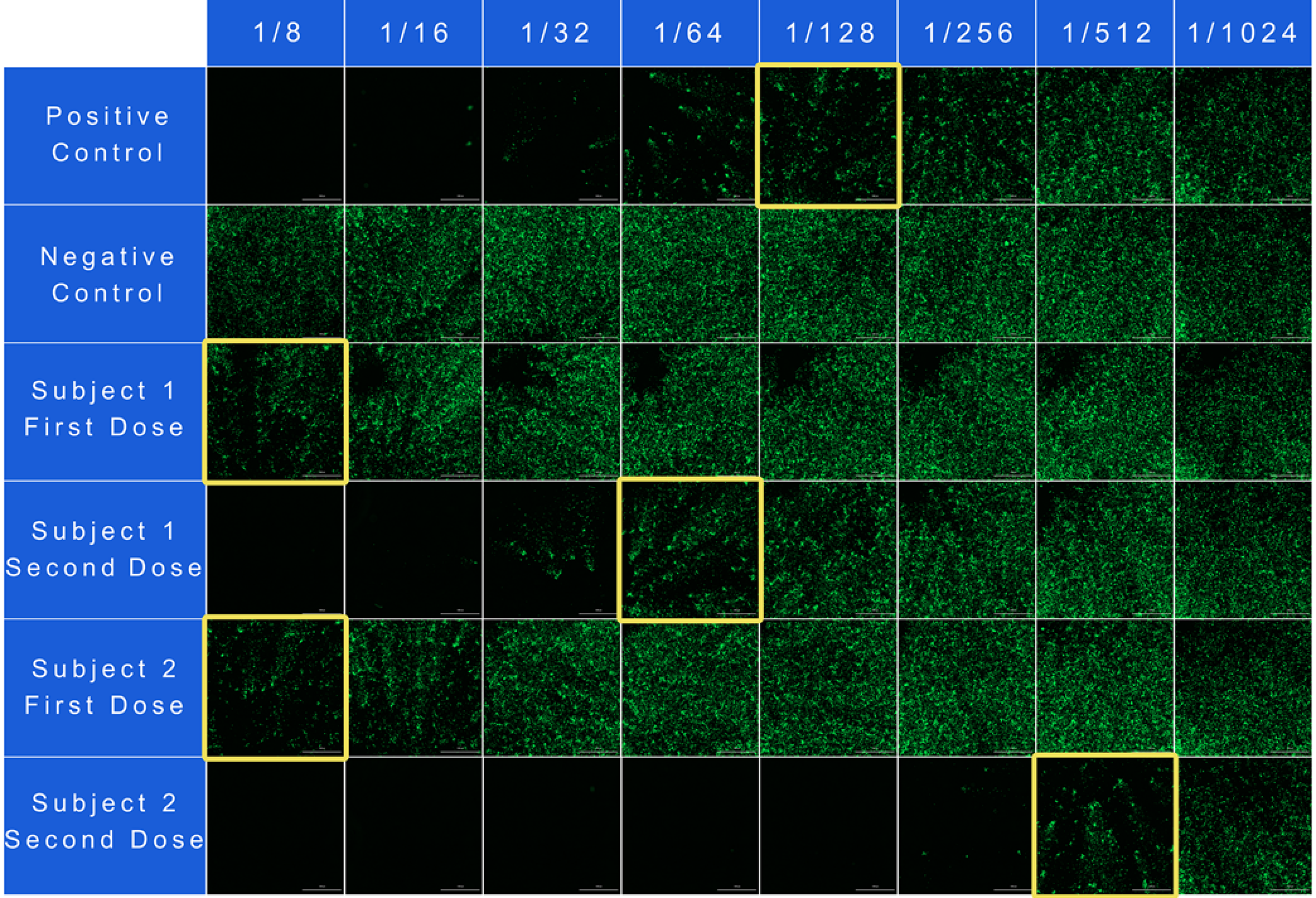 Because the lab bench experiment involved only two people and everyone’s immune system is different, Richardson says it would be meaningless to calculate the percentage increase in antibodies produced before and after vaccination. Instead, the study compares antibodies produced in the two subjects with the antibodies of a person who had not been vaccinated — what the experiment calls the “negative control.” The antibodies of the two subjects were also compared with those of a fourth person who had recovered from COVID-19, but still retained lots of antibodies from the experience — what the experiment calls the “positive control.”

Richardson says the data show the one-two punch of AZ and Pfizer was effective in producing a significant boost in the number of antibodies in both people. He says the bottom line is “the levels of protective antibodies approached those of a convalescent patient who survived COVID-19 and is now healthy.”

What about side effects?

Both subjects in the Dal lab’s experiment experienced minimal side effects after receiving their first dose of the AstraZeneca vaccine. However, the study says both people reported headache, chills, lethargy, and fatigue, as well as soreness at the injection site following the second dose of Pfizer-BioNTech vaccine. The symptoms lasted for 24 hours in one case and 36 hours in the second.

These findings mirror those from a “mix and match” study in the United Kingdom as well as a much larger study from Spain published two weeks ago. In that study, 1.7% of Spanish participants reported side effects limited to headaches, muscle pain, and general malaise. The study, run by Spain’s state-backed Carlos III Health Institute, found the presence of certain antibodies in the bloodstream were between 30 and 40 times higher in people who got the follow-up Pfizer shot, compared with those who received only one dose of AstraZeneca.

The Spanish study also determined the second dose of Pfizer produced seven times more antibodies that “neutralize” the COVID-19 virus. Subjects who received a second dose of AstraZeneca saw their production of neutralizing antibodies double  — a desirable result, but not as dramatic as that observed in those who received Pfizer in their second jab.

The small size of the Richardson experiment certainly limits its statistical value but it’s a fascinating example of the important and creative research taking place locally. Richardson’s lab has developed a model virus that contains the COVID-19 spike protein found in the UK variant, and scientists at Dal are also working on modelling other viruses that could eventually include the South African, Brazilian, and Indian versions so other researchers can discover how to limit their damage.