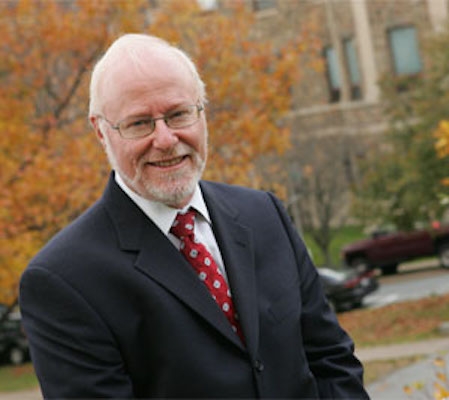 The province yesterday published the public accounts for the 2015-16 fiscal year, which ended March 31.

I’ve been slowly going through the documents, and as I find interesting items I’ll report on them.

For now, I’ve just scanned for the big salaries. As reported in the public employee compensation reports, the highest paid provincial employee appears to be former Dalhousie University president Tom Traves, who retired in 2013. Traves was paid $473,256, which is more than the actual working president, Richard Florizone, earned ($409,929). Traves’ contract included a three-year post-retirement salary at his highest annual working wage, and last year was the final year of that contract.

I suspect some doctors may be making more than Traves, but I don’t believe that information is public in Nova Scotia.

The university presidents seem to be among the highest paid employees. It’s interesting to do a comparison of salaries by university enrolment. Here are the bigger salaries (enrolment figures are for the last year available, not necessarily 2015):

I don’t know that $200,000 or $300,000 is overly paid for a university president (but $400,000 is overly paid for any job), and a cost-per-student breakdown isn’t completely fair because the smaller universities will have smaller administrative staffs so presumably there’s more burden on the president. It’s not so much the president’s salary that concerns me, but more the overall administrative costs, and those are soaring. That’s especially disconcerting when the universities are slashing their full-time professor ranks and imposing ever-increasing tuitions on cash-strapped students. 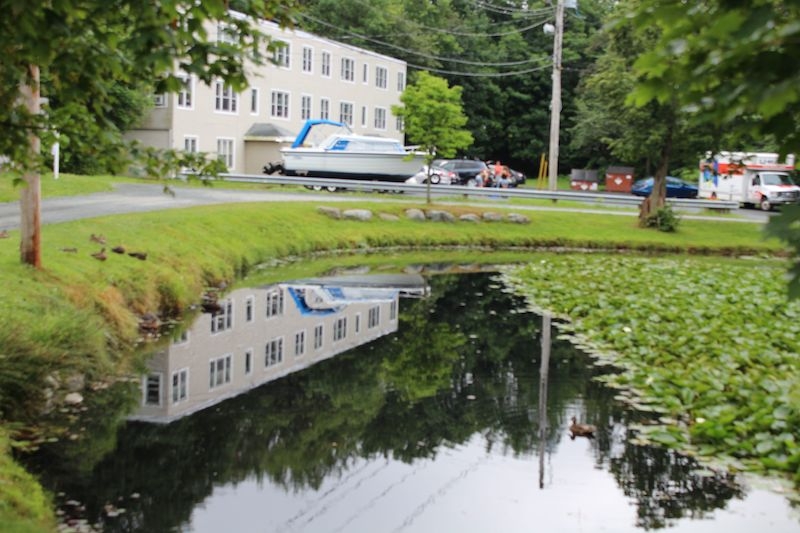 About a dozen people spoke at the public hearing at Tuesday’s special meeting of council — more than two thirds of them against the proposed 41-unit building at 8 Linden Lea in Dartmouth.

The development, dubbed Pemberley Suites, is proposed by Milestone Properties. It would mean the company’s more affordable 12-unit building currently on the site would be torn down. 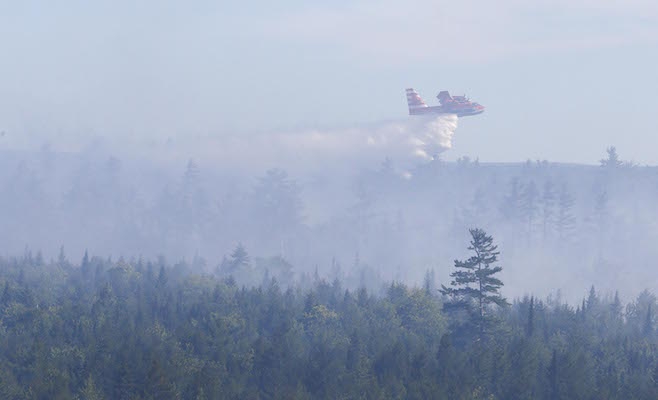 When I worked in California, I regularly covered wildfires that were 100,000+ acres, so it’s hard to get too excited about Nova Scotia’s Seven Mile Lake fire, which has grown to 240 hectares overnight. Still, no matter how large, fires are dangerous — especially for the firefighters. It’s damn hard work, plugging away for 14 hours a day in extreme heat made even hotter by the fire. And there is a real risk to life.

After concern for the firefighters, the biggest worry is for private homes; I haven’t seen any reports of houses being threatened, so that’s good. The forest itself could use the occasional burn. Left to its own devices, which unfortunately seems unlikely, the forest will be healthier in a few years, thanks to the fire.

Someone vandalized the community oven in the Dartmouth Common, reports Elizabeth Chiu for the CBC.

Newspapers are seeing advertising revenues collapse, and yet Metro is giving away free advertising.

For instance, on Monday Metro published an “article” written by Canadian Press writer Adina Bresge that doesn’t even pretend to be objectively looking at the Harbour Hopper, but rather reads as a straight-up advertorial for the boat.

And today Metro plugs the Swedish unfinished product store with a front page news article by Yvette d’Entremont, also without a contrary or even questioning word about the company, the expansion of Dartmouth Crossing, or the effect of the store on local retailers.

These companies would have paid thousands of dollars had they purchased similarly placed advertising, and yet Metro is just giving it away for free. 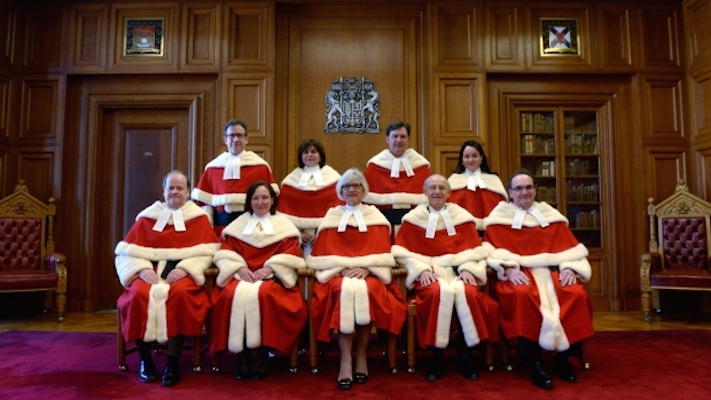 “It’s the sort of slight that Atlantic Canadians normally bristle at,” writes Peter Cowan for the CBC:

Last week, Prime Minister Justin Trudeau said he’d be OK with the country’s top court having no representation east of Quebec, and there was barely a peep out of provincial politicians in the region.

After decades of Atlantic Canada being guaranteed one seat on the court, that has now been stripped away.

Just think if former prime minister Stephen Harper had pulled a similar move. Politicians in Atlantic Canada would have gone ballistic, especially because Trudeau is letting Quebec keep its guaranteed three seats that are enshrined by law. Atlantic Canada’s one seat on the court was through constitutional convention, not legislation.

All four premiers are Liberal as well.

I don’t know anything much about regional Supreme Court appointments and how that translates into justice — I care about the court’s decisions and not where the judges call home — but maybe I’m missing out on an entire area of jurisprudence.

Still, when it comes to Atlantic Canada’s Liberal MPs and premiers failing to challenge the Trudeau government, I worry more about political effects than judicial decisions.

For instance, as Richard Starr has repeatedly pointed out, the Atlantic provinces are losing out on billions of dollars in health transfers because the Trudeau government has refused to reverse the Harper government’s ill-conceived changes to the equalization formula. If the changes aren’t reversed, Nova Scotia in particular will soon face a fiscal crisis. It’s a disservice to Atlantic Canadians that not a single premier or MP is raising the issue publicly.

After being away from the county for the past 56 years, I have seen a lot of changes since returning last October.

Many of these changes have not been, in my opinion, for the betterment of the people of the county or the public in general.

Inverness business district has deteriorated over the years; hotels, motels, theatres, grocery stores, and restaurants have all disappeared. Worst of all, public access to the jewel of Inverness, its beachfront, has been overtaken by a golf course.

From the drawings in last week’s article by April MacDonald, about the unveiling of the “luxury beach cottages” proposed by Cabot Links, I wonder if the beach will still be for the public and tourists or will it belong to Cabot Links?

Public access now is restricted to a single road — the Beach Road.

Whatever happened to the second Beach Road access, the walking trails used by our parents and ourselves for over 100 years? What has happened to the sand dunes which reached over 100-200 feet from the high tide mark along this beautiful beach front?

Does the province of NS protect the public access to the waterways of the province and its ocean beachfronts?

A second road access to the beach is a safety issue for all who use the full beach area. A drowning victim, heart attack victim, or a sunstroke victim at the upper end of the beach near the cottages RV park cannot get emergency medical response services in a timely way, which could save their lives.

Do we have to wait for someone to die on the beach before something is done to provide for safe, full access to our beachfront? I hope not.

A second access road connecting along the beachfront with the existing Beach Road would provide full access for the people of Inverness, tourists, and emergency services as well.

The sea around Halifax, 9am Wednesday. Map: marinetraffic.com 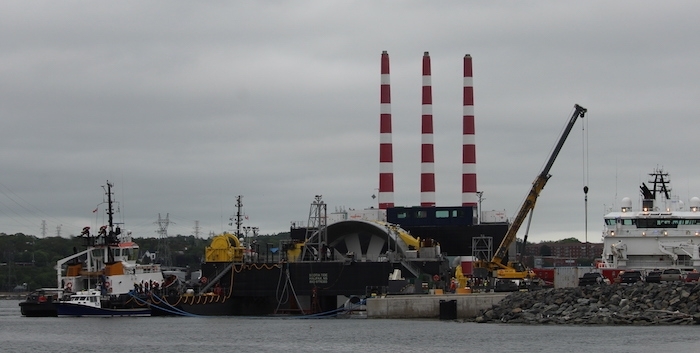 The Scotia Tide, carrying the first of two tidal turbines destined for the Minas Basin, is obviously still in Halifax. That’s because there is a problem. The company reported last week:

In mid-July, we were advised by OpenHydro that they were investigating a potential issue with the metal properties of a fastening component in its Open-Centre Turbines. An OpenHydro investigation traced the issue to a supplier, and last week, lab testing confirmed that a risk exists with the long term durability of this component. The component was not locally sourced.

While considered a minor element of the overall system, the components are used to secure part of the turbine generator in position, and could fail prematurely if not replaced. Long term performance and reliability are key priorities, and so the decision has been made to replace the components in the Open-Centre Turbines.

Of key importance is that this is not an issue with the turbine design, rather a matter of incorrectly supplied components. Part of the purpose of this demonstration phase is to identify all potential issues, and OpenHydro is taking the appropriate steps to remedy the issue.

The component is inside the turbine so the rotor must be removed to gain access. Last week, work began in Pictou on turbine 2 as it is already in a horizontal position. OpenHydro is currently considering options for replacing the components in turbine 1.

Cape Sharp Tidal is not yet in a position to provide an update on deployment timelines as it is dependent on remedying the situation. We will continue to update stakeholders with new information as it becomes available.

In the meanwhile, the Scotia Tide is being shifted around the harbour to make room for other ships as needed.