Halifax council voted 7-6 last night to allow garbage from businesses and apartments to be sent to dumps outside of HRM. This reverses a long held policy of keeping waste in the municipality. I explained the issue in detail here (behind the Examiner pay wall). Council, however, unanimously rejected an increase in tipping fees at the Otter Lake dump, which was part of the overall waste management proposal. So, tipping fees at Otter Lake will remain at $120/tonne, but that’s still far more than the $76/tonne at the Kaizer Meadow dump in Chester, more than justifying the increased fuel and labour costs for most haulers.

Several councillors — Mayor Mike Savage, Gloria McCluskey, Waye Mason, and Linda Mosher — were sick yesterday, so I suspect this isn’t the end of the issue. In light of the close vote, I think it likely that one of the missing councillors will soon table a motion of reconsideration. 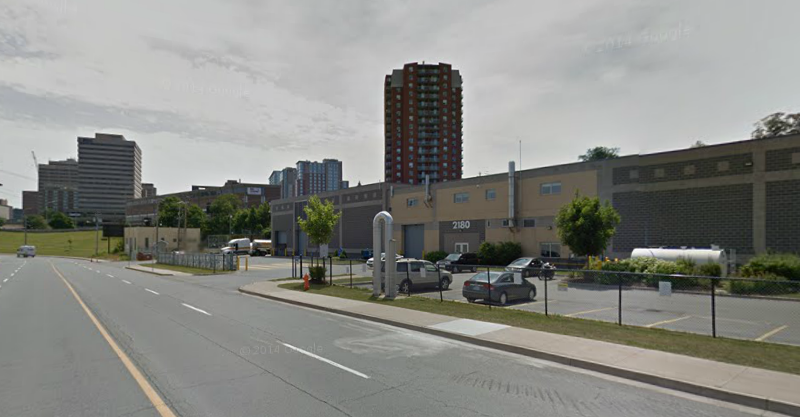 The shuttle bus for pedestrians and bicyclists during bridge closures will drop them at the sewage plant. Photo: Google street view

At a meeting last night in Dartmouth, the bridge commission released new details of its plans for bridge closures during reconstruction of the Macdonald Bridge, reports Metro. The project requires the removal of the pedestrian and bicycle lanes in June:

Compensation for cyclists and pedestrians will come in the form of a 24-hour shuttle service that will be offered until that section of bridge reopens, explained the bridge commission’s Alison MacDonald.

She said three 17-seater buses equipped with bike trailers that can hold between 12 to 14 bikes, will offer service between 30 Faulkner St. in Dartmouth to a tentative location of a wastewater treatment facility in north-end Halifax.

Understand what’s going on here. Any reasonable person designing a shuttle for pedestrians and bicyclists would simply pay Halifax Transit to run a bus from the Bridge Terminal in Dartmouth to the bus turning lane at the west end of the bridge. For the opposite direction, the bus would run from the bus stop on the south side of North Street back to the Bridge Terminal. At nights, when the bridge is closed completely, both Halifax stops would be at the south side of North Street, with the bus then looping under the bridge and making its way around via the MacKay Bridge. That solution would present the least hassle for commuters: they’d get on and off the bus at the closest points to the bridge, and continue their journeys as they otherwise would, as when the bridge is open.

But instead commuters will be picked up at the abandoned Bridge liquor store in an otherwise empty field, and then dropped off at the sewage treatment plant at the bottom of the hill in Halifax, close to nothing — a literally crappy shuttle. Can you imagine getting left off at the sewage plant at 1am?

“Insurers for the city of Halifax are refusing to pay for the cleanup of the large fuel leak at the Metro Transit bus depot in Burnside last year,” reports the CBC. Expect a long court battle.

➡ Firefighter Brian Conrad will be required to testify in court, related to a lawsuit filed by property owners in Herring Cove who lost their homes in the Spryfield fire. Firefighters responded to the fire on MacIntosh Run in Spryfield on Wednesday, April 29, 2009 but left the scene at nightfall, their hoses left on the ground. The fire flared up again that night and burned across the backlands all the way to Purcells Cove Road. The homeowners allege negligence on the city’s part. 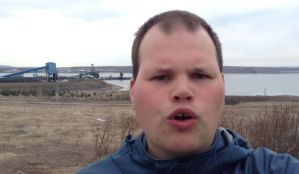 ➡ I’ve posted videos of Frankie MacDonald, the amateur weatherman from Cape Breton, in this space. Frankie, who has autism, is joyous, and I’ve been happy to simply spread that joy around. Recently, Frankie was profiled in Buzzfeed. Frankie records his videos and posts them on YouTube for free, but Gordon Stevens wants to profit off Frankie’s newfound celebrity, so has started a clothing line referencing Frankie’s “be prepared” exhortations. Some unstated portion of proceeds from sales will go to Autism Nova Scotia, says Stevens, but there’s not a word about payment to Frankie himself. Why should the guy who actually does the work get paid? 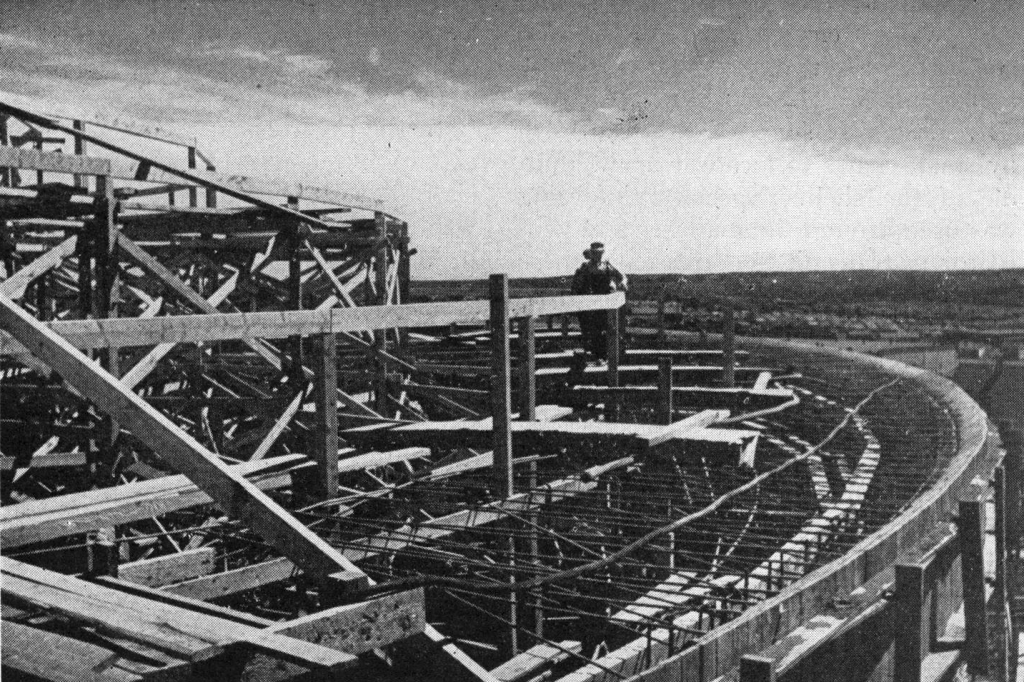 A worker constructs part of the forming for the roof dome in 1946.

Yesterday, I linked to Stephen Archibald’s offhand comment about the Robie Street reservoir and a fantastic Halifax Water video of the roof of the thing being blown up in 1999. Today, Peter Ziobrowski gives a detailed history of the reservoir (and of much of Halifax Water itself). The dome of the reservoir was built in 1913, but its roof was replaced twice, in 1946 and 1999. The 1946 iteration was especially noteworthy:

The roof dome at the time was the largest pre-stressed concrete shell in the world. At three inches thick, it was cast in place on forms, after the edge ring was cast. The dome took five days to pour, and work progressed around the clock, with two 12-hour shifts. The pre-stressing was accomplished by applying 180,000psi of force on a 0.162″ steel wire, and wrapping it around the ring 360 times, in five layers. A coat of gunite was applied between each layer, and in all 42 miles of wire were used.

Recently, the devastation came to our neighbourhood. For generations, the forests have provided the people and animals of this area with a wood supply, recreation and home. Select cutting has been the method used in these woods, first with an axe and crosscut saw, then chainsaws. Sustainable harvesting only, to ensure a viable forest, until last month.

For some unknown reason, the owners of these lands withdrew every speck of wealth the previous generations had left for them and their future. There is barely a tree left standing. What was not cut was smashed down by the heavy equipment. A crew came in and flattened the whole area in a few weeks.

It is clear to me that there are supposedly educated people in the field who believe the only value of a forest is when it leaves the area on the back of a truck. Someone must show some leadership and stop this madness. Our children, their children and their children have just been robbed and there is no one to call.

On this date in 1878, the Reform Association was formed. It later became the Liberal Party of Nova Scotia.

The Woman in the Window (Wednesday, 8pm, Dalhousie Art Gallery)—Fritz Lang’s classic 1944 film noir, in which Edward G. Robinson was warned about the “siren call of adventure,” but what are you gonna do, ya know?

Town Hall meeting (Wednesday, 4pm, Loyola Conference Hall)—The “here’s your new prez” dog and pony show. It’s perverse that a top-down announcement of a decision made with little input from faculty or students is named after the most democratic bottom-up decision-making process invented in the US, but we’re all about poking people in the eye nowadays, so shut up and sit down. 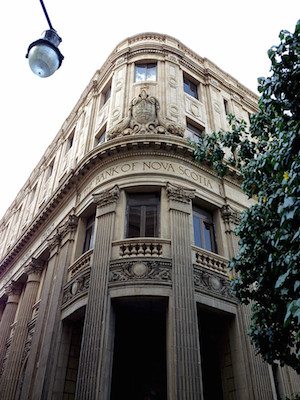 “I wonder if Scotiabank even knows that it’s there?” asks the reader. Oh yes, yes they do. Scotiabank is looking at Cuba with lusty desire, reports the Globe & Mail:

Amid economic reforms on the island, Bank of Nova Scotia has reportedly applied to Cuban authorities to set up a representative office in the capital. Royal Bank is also considering opening an office in Havana, the report said.

Scotiabank, which has extensive operations across South America and the Caribbean, and RBC, Canada’s largest bank, both had branches in the country before the 1959 Cuban Revolution ushered in Communism, and a subsequent U.S. embargo, which slowed foreign investment.

However, economic reforms in Cuba, stemming from the handover of power from long-time president Fidel Castro to his brother, Raúl Castro, are changing the country as the government looks for ways to boost Cuba’s economy.

Just as the biggest cultural phenomenon of the 1980s was 1950s nostalgia, I predict that Cuba in the 2020s will be all about 1950s revivalism. The mafia will move back in to their old haunts, splash a new coat of paint on the casinos and have Michael Bublé do his best Frank Sinatra impression. Havana will once again become “a mistress of pleasure, the lush and opulent goddess of delights.” And Canadian banks will revive their drug money-laundering operations.

Heck, Castro’s still alive, maybe he can take to the hills again. 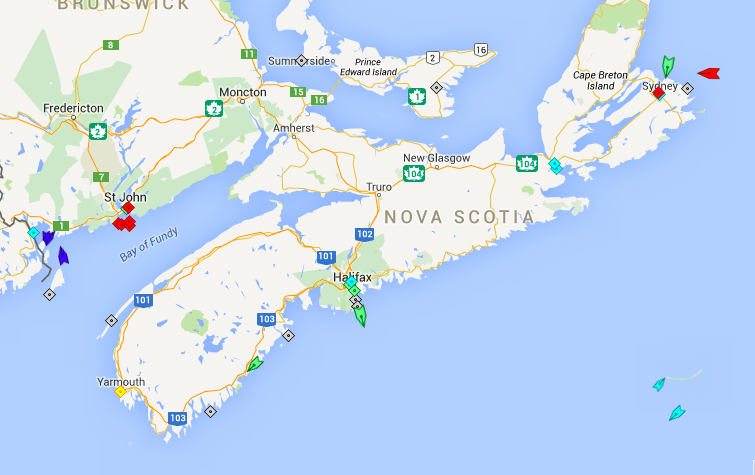 The seas off Nova Scotia, 8:15am Wednesday. Map: marinetraffic.com