You are here: Home / Featured / Court papers reveal a previously unpublicized industrial accident at the Moose River Gold Mine 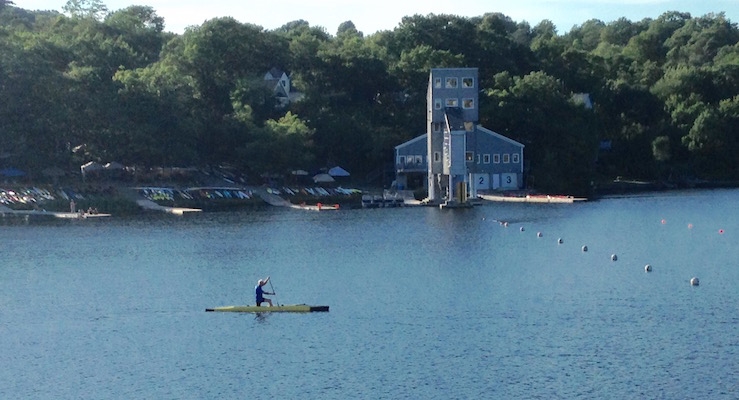 “On a hot steamy night more than 150 Dartmouth residents turned up at a ‘Save Our Lakes’ meeting hosted by Claudia Chender and Susan Leblanc, the representatives for Dartmouth South and Dartmouth North in the legislature,” reports Jennifer Henderson:

Top among the concerns expressed at the Micmac Aquatic Club last night is the fact that no level of government is taking charge to monitor water quality which is deteriorating as a result of several factors, including climate change and siltation from stormwater runoff triggered by new subdivisions and commercial developments.

Bottom line: citizens want immediate action and a shared commitment from both the city and the province to restore and protect Dartmouth lakes. 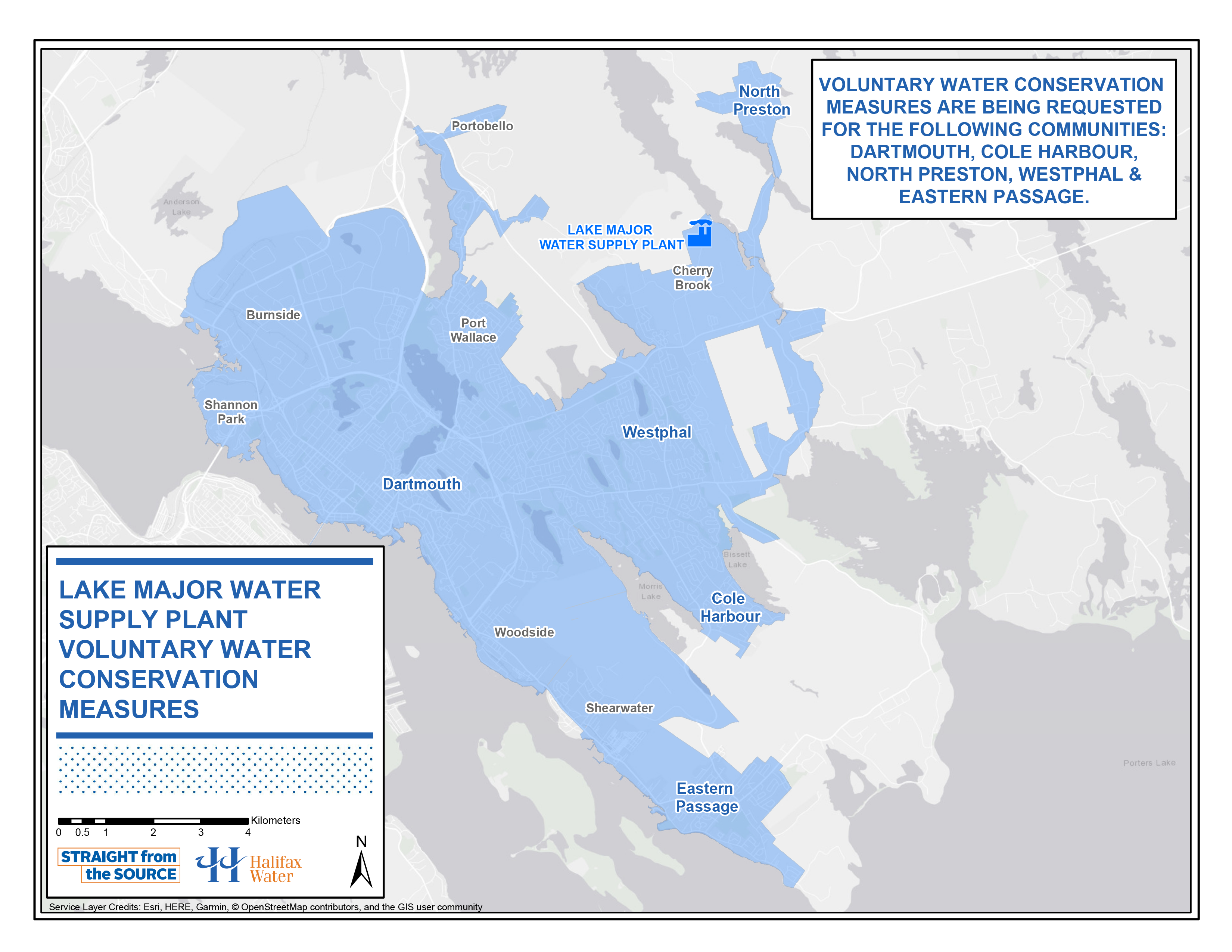 In order to conserve water, Halifax Water is requesting that all residents and businesses supplied by the Lake Major Water Supply Plant voluntarily reduce their water use until further notice. Suggested water conservation measures include:

“While the low lake levels are related to a lack of rainfall, this water supply appears to be the only one with such consistent issues,” reports Haley Ryan for Star Halifax:

However, about two weeks ago, a “much more robust” concrete dam was installed. It hasn’t been able to make much of an impact yet, Campbell said, since the region hasn’t had significant rainfall for weeks, “so there’s not a lot of water for the new dam to hold back.”

In the future, Campbell said, they’re “optimistic” the new dam will allow Halifax Water to have much better control over the water supply. It should also allow fish to pass through to other waterways more easily. 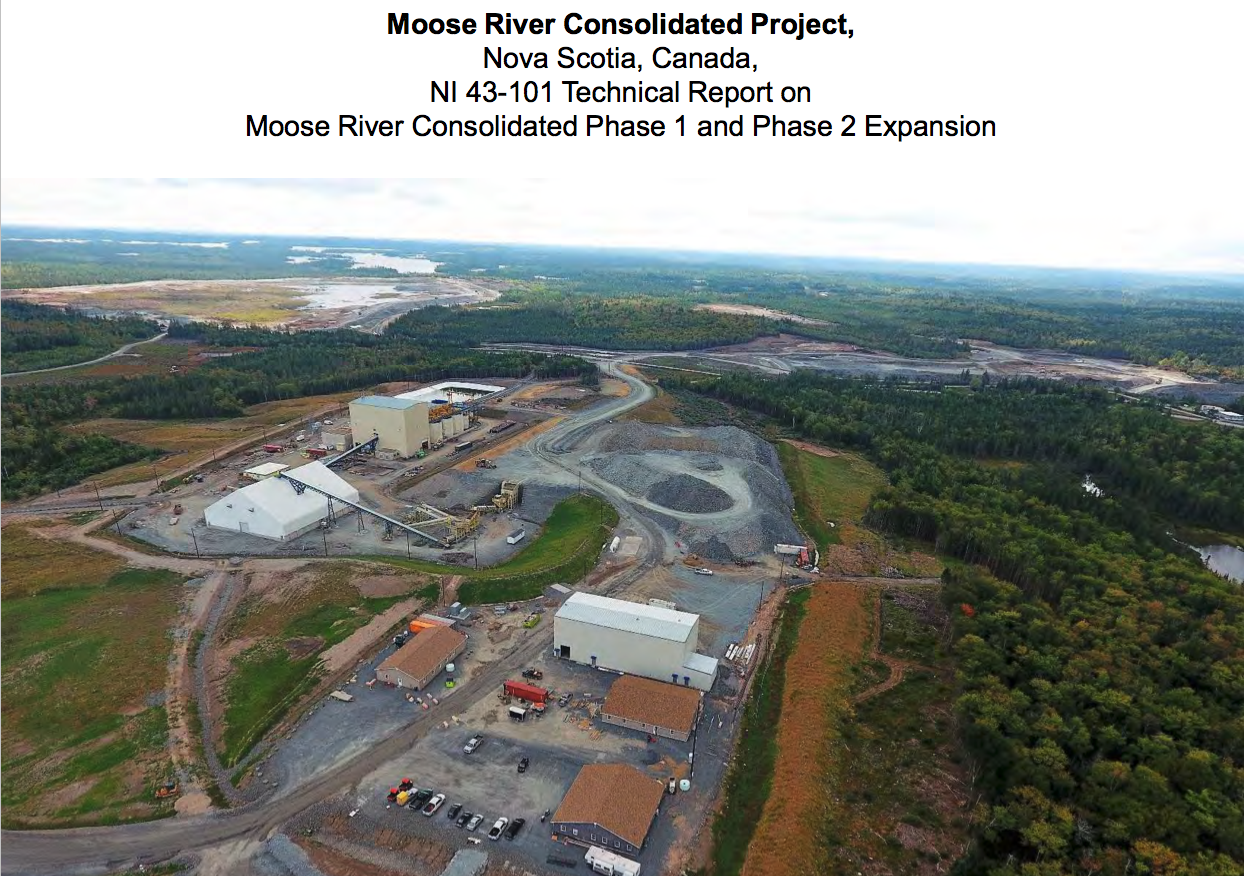 Yesterday, Zurich Insurance Company filed a statement of claim with the Supreme Court related to an industrial accident it says occurred at the Moose River Gold Mine in Middle Musquodoboit.

Zurich insures an Ontario-based company called Scott Steel Erectors Inc, which was hired as a subcontractor at Moose River.

Scott’s “job was to hoist processing tanks necessary for the operation of the Gold Mine into place and construct a platform and mechanical parts above the tanks,” reads the claim. Scott rented “large construction equipment” for the job.

“The nine tanks are contained in a Carbon in Leach Containment area,” the statement continues. “This Containment Area is a large space surrounded by a five-foot concrete wall designed to contain any liquid which may escape from the tanks.”

“On September 15, 2017,” the statement continues, “during construction of the tanks and Containment Area, an employee or employees of [Atlantic Gold] … released the water valve on the open-top tanks. This caused water from the tanks to flood the containment area to a depth of approximately four feet.”

All of the heavy equipment Scott had rented was inside the containment area, and so was flooded and damaged. Zurich says it paid a settlement of $36,317.98 to the rental company, and now it wants reimbursement from Atlantic Gold.

The claim hasn’t been tested in court.

Hey, shit happens. As it did 16 months later at the same mine, reported Joan Baxter:

Atlantic Gold’s manager of environment and permitting, James Millard, calls it a “spill” or a “loss of control” caused by a “gasket failure.”

By whatever name, the event happened on the night of January 3, 2019, at the company’s open pit gold mine at Moose River. It involved 380,000 litres of contaminant-laced slurry, which flowed from the processing plant where ore is crushed and gold extracted, and down a trench underneath the double-lined 500-metre pipe that should have been carrying the effluent to the tailings pond.

The leaked slurry flowed into a lined pond that Millard says was developed and designed for leaks.

Someone was stabbed on Pinecrest Drive last night around midnight. The cops arrested the stabber. The stabbee is in hospital with what are believed to be non-life threatening wounds, but boy howdy that’s no fun. 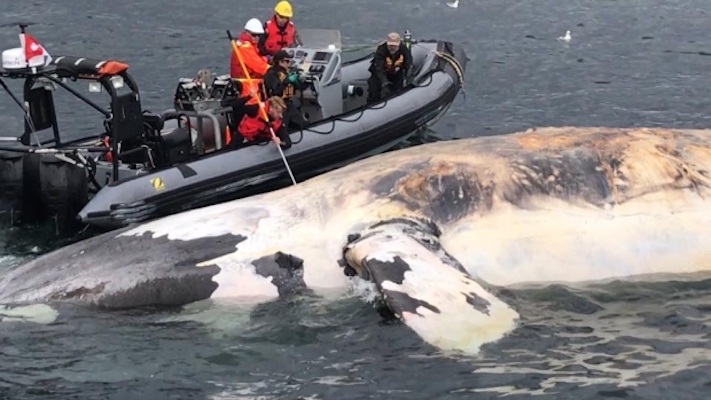 “Right whales — so called because they socialize at the ocean’s surface and contain so much blubber they float like corks after they’re killed, making them the ‘right whale’ to hunt — were almost wiped out by commercial whaling in the 19th and early 20th centuries,” reports Chelsea Murray for The Coast:

By the 1970s, scientists didn’t even know if there were any whales left. In 1980, however, a group was found congregating in the Bay of Fundy.

After 1986, when commercial whaling was finally banned, threats to the species became twofold: collisions with ships, and entanglement in fishing gear..

Around that same time, however, the whales began moving out of those waters, and no one knew where to find them. For reasons still not entirely understood, the whales’ only source of food, called zooplankton, largely disappeared from the Bay of Fundy. (One theory is that the Gulf of Maine has simply become too warm for certain types of the tiny crustaceans.)…

Then, in 2015 … more whales were spotted in the Gulf of St. Lawrence than in the Bay of Fundy. But this wasn’t exactly good news. The gulf is a virtual marine highway straight into the heart of North America, feeding thousands of ships a year into ports from Quebec to the Great Lakes.

Here, massive container ships didn’t slow down, and the sea was a maze of snow crab fishing gear from May to July — precisely when the whales arrived. More than 80 percent of them bore entanglement scars, and calving rates had dropped by 40 percent.

And that brings us to 2019, and eight whales dead so far. No one was prepared for this. But we could have been. 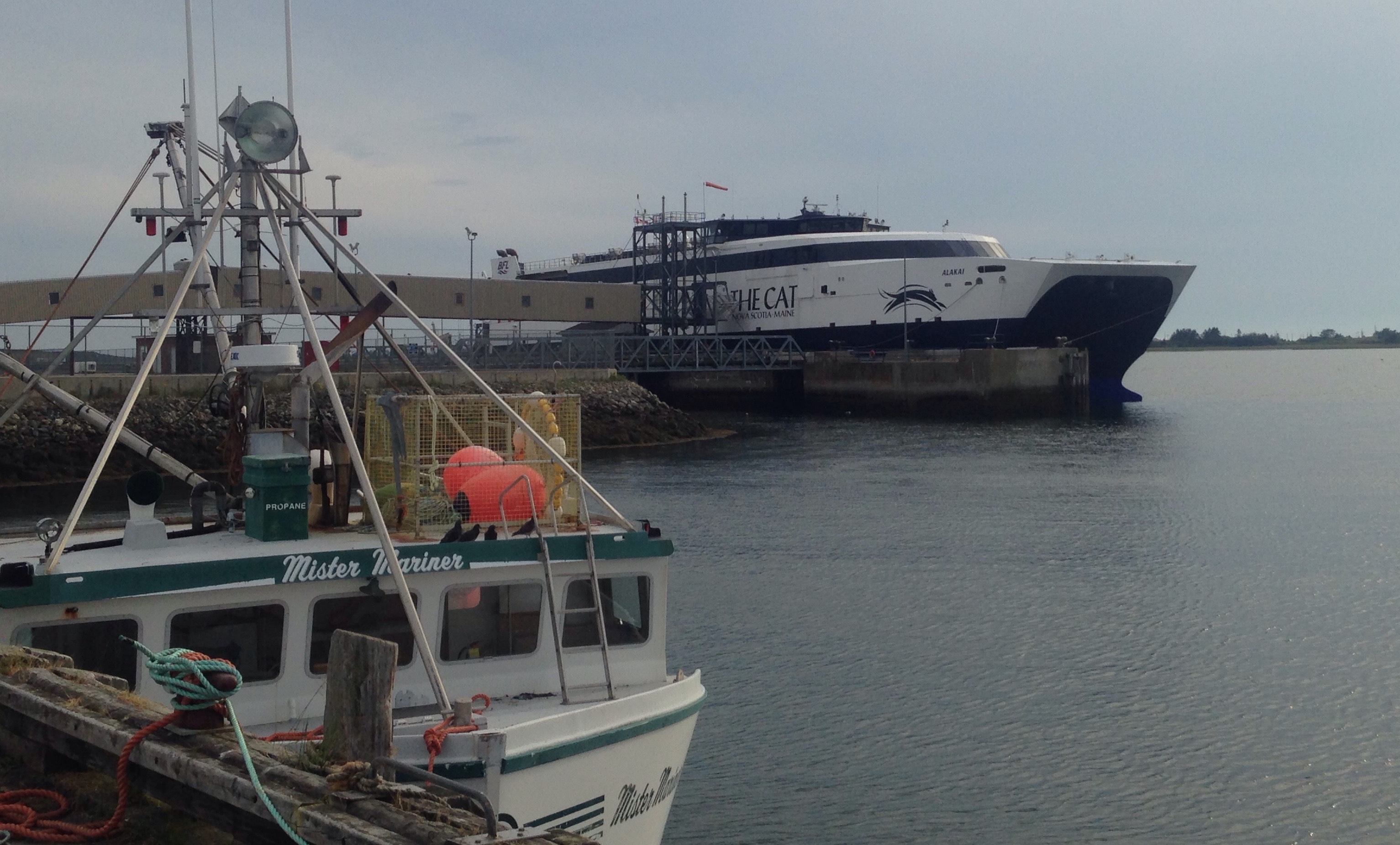 Jennifer Henderson has been pestering Peter McLaughlin, one the province’s many PR people, about the Yarmouth ferry. “I asked ‘if or when’ The Cat will sail,” Henderson tells me. “I sent an additional query asking if we are still paying former US ambassador to Canada, David Wilkins, hired in June I think.”

Here’s the response she got:

Bay Ferries is working with the province to have the ferry service in operation as soon as possible. We continue to work closely with our project consultants, contractors and US Customs and Border Protection. Work is ongoing at the Bar Harbor terminal. Marine facility work is complete, and we are focused on the land side. We continue to work towards ferry service this season.

Comments Henderson: “It feels to me like the Dead Parrot skit in Monty Python but there you have it.” 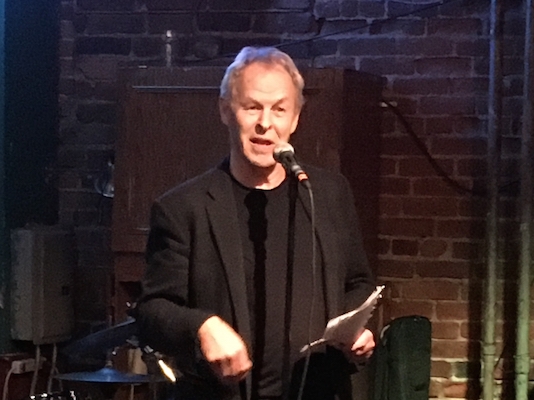 “As a journalist Linden MacIntyre covered adversity around the world, sharing the experiences of those caught in tragic circumstances, but he’s waited decades to bring the story of his hometown to the page,” reports Holly McKenzie-Sutter for the Canadian Press:

The investigative reporter and novelist was born in St. Lawrence, N.L., where his new book The Wake is set. The author’s hard-rock miner father moved there in the 1940s to work for the fluorspar mining operation that rolled into the poverty-stricken community, which was recovering from a natural disaster and an unexpected collapse of the area’s crucial fisheries.

8. What Happened to Holly Bartlett

We are delighted to announce that "What Happened To Holly Bartlett" will screen at @thefilmfest. The screening will be Tuesday, September 17th at 9:10pm. https://t.co/tO79qMYvfW 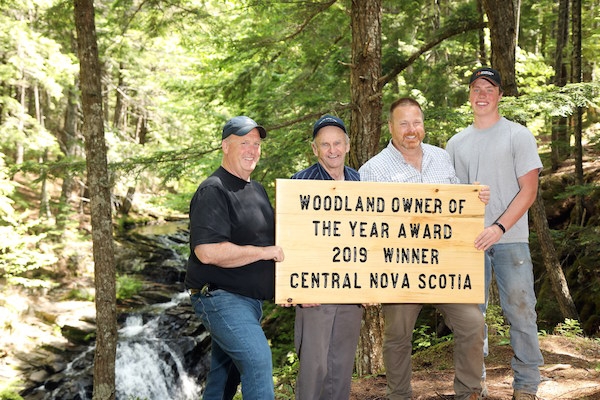 Photo: Department of Lands and Forestry

“A pamphlet announcing the Woodland Owner of the Year Award arrived in my mailbox yesterday, and finally gave me some good news about forestry in NS to celebrate,” writes David Patriquin:

The online announcement is here

The 2019 award goes to Spence Managed Forest of Ellershouse, West Hants County which won the Central Region Award, and in turn the Provincial Award:

The Spences are third generation woodland owners of a beautiful and diverse 2000-acre property that has top tier management help from Jim Bremner (a South Central WOYA winner for 1995) and Jason Casey.

Located in Ellershouse, the property is made up of diverse forest type and age classes. From late succession Pine, tolerant hardwood, Hemlock, to young plantations. This well managed and heavily invested property is a showcase for responsible and sustainable management. Long shared with outdoor enthusiasts, recreational values have co-existed successfully with forestry operations for decades, resulting in a continued multiple values management regime. Various silviculture treatments have been applied on the woodland and they include appropriate selection harvest methods, commercial thinning, and pre-commercial thinning. A recent partial harvesting (2018) adjacent to the very popular Dawson Brook Falls is a good example of the owner’s ability to balance social, environmental, and economic goals.

Patriquin goes on to favourably review those private operations, commenting:

Wow. Wish we could see this kind of forestry on the logged Crown lands.

I noticed a grammatical problem at Compass Distillery on Agricola Street yesterday. Also, a booze problem: 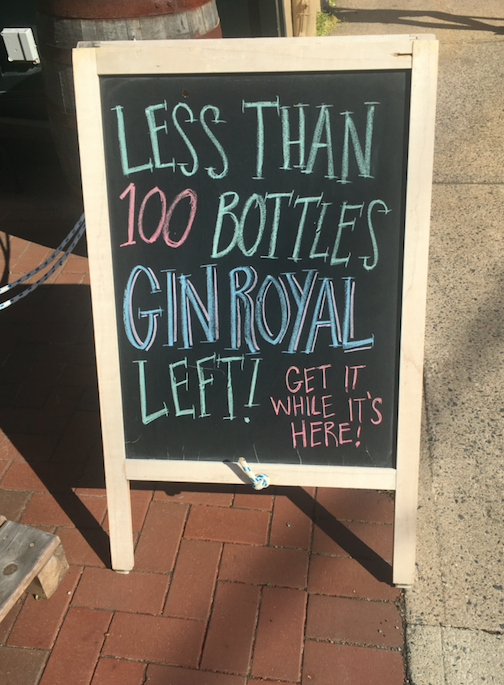 Everyone is at the cottage drinking the last of the few remaining bottles of Gin Royal.

Enjoy what’s left of the summer.