You are here: Home / Featured / Court documents contradict RCMP denial that they ignored Susie Butlin’s pleas before she was murdered 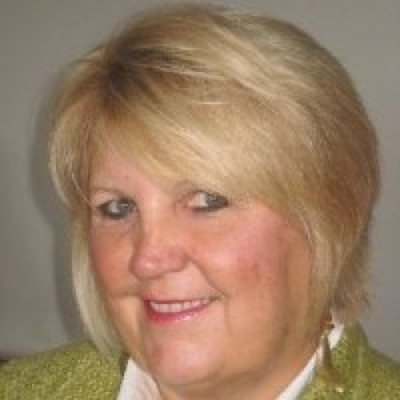 On September 17, 2017, Susie Butlin was murdered by her neighbour Junior Duggan. As the Halifax Examiner reported last week, the murder came after Butlin repeatedly pleaded with the RCMP to intervene to stop Duggan from harassing her.

In fact, Butlin’s friend Suzanne Davis told the Examiner that Butlin was ignored by the RCMP, and just three days before Butlin’s murder, an RCMP officer told Butlin that her allegations against Duggan made her — and not Duggan — a “menace to society,” and sent her on her way.

Before publication of that allegation, the Examiner requested comment from the RCMP. We agreed to withhold publication for four days to give the RCMP time to investigate and get back to us. But the RCMP didn’t respond in the agreed upon time frame, and so we published.

I can confirm that a member of Colchester District RCMP met with Susan Butlin on September 14, 2017 in person at Colchester District RCMP and had a subsequent telephone conversation on September 15, 2017. The purpose of the meeting and subsequent conversation was to discuss the progress being made on a matter that the RCMP was investigating following a complaint she made to the police on August 7, 2017.

With reference to his notes from those dates, which are on the file, the RCMP officer has advised that during the in-person meeting on September 14, Butlin was content with what the police officer told her and the conversation was amicable. He advised that during the beginning of the phone conversation on the 15th, Butlin was somewhat upset, however, he clarified the same points as he had done in the in-person meeting the previous day, and the call was ended with her seeming to be satisfied with it. It was an amicable conversation. The RCMP officer did not tell Butlin she was a “menace to society”, or tell her to “mind her own business”.

The allegation of sexual assault was made to the RCMP on August 7, 2017 and related to an incident that is alleged to have occurred on July 2, 2017. Between August 7 and September 17, we have records of a phone conversation between Butlin and the police on August 7, followed by an in-person visit by the RCMP to Butlin’s home the same day. RCMP spoke to her on the phone on September 12, and had an in-person meeting with her on September 14, then a phone call on September 15.

In short, the RCMP denied that any officer told Butlin she was a “menace to society” for making allegations against Duggan. We immediately updated our article with that denial.

Since then, however, the Examiner has obtained victim impact statements from Duggan’s trial and the Agreed Statement of Facts from Duggan’s conviction — and those documents support Davis’s allegations, while contradicting the RCMP’s denial. 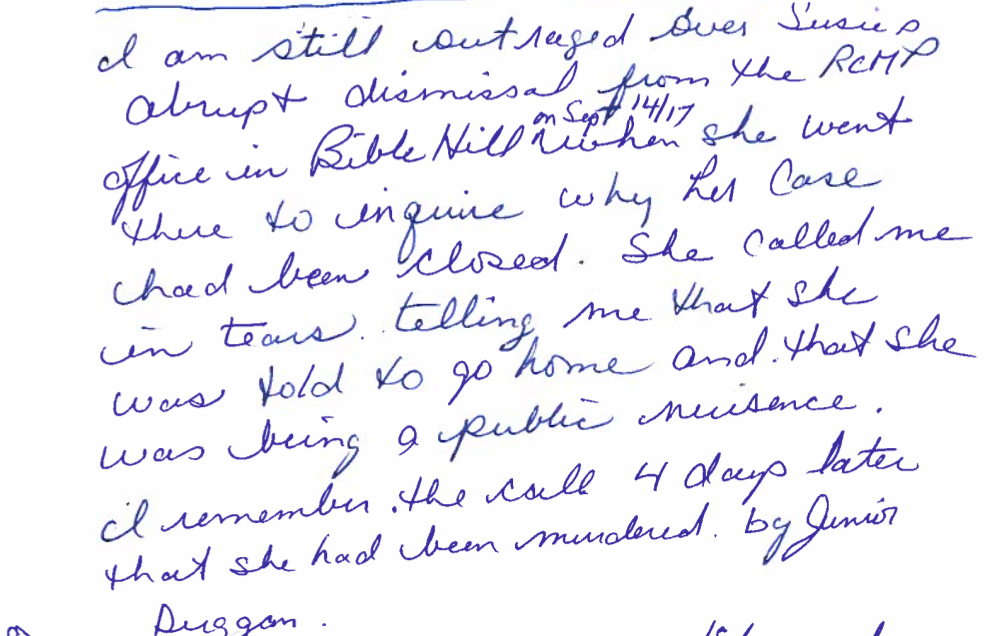 One of those victim impact statements was written by Butlin’s sister, and is dated August 19, 2019. It reads:

I am still outraged over Susie’s abrupt dismissal from the RCMP office in Bible Hill on September 14, 2017 when she went there to inquire why her case had been closed. She called me in tears telling me that she was told to go home and that she was being a public nuisance. I remember the call 4 days later that she had been murdered by Junior Duggan. I know she feared for her life and for the safety of the 2 teenage female exchange students she as host mother to in early Sept / 17, because of the allocations [sic] she presented in court on Aug. 30 / 17. She told me this.

Another comes from Davis. It reads:

I will always believe the system let my Susie down. I know how terrified she was. This is something I will never forget.

I can still hear her words, “I won’t make the next court date. He will kill me before then.” These words of hers haunt me every day.

To this day, I wonder why. Why Susie had to die. Why Susie’s pleas for help went unheard.

The Agreed Statement of Facts for the Supreme Court of Nova Scotia also contains damning details that raise questions of why the police did not act on the myriad red flags raised that summer by Duggan’s behaviour, or on the warnings they were given by both Butlin and Duggan’s wife.

Click here to read the Agreed Statement of Facts.

The statement of facts says that on August 21, Duggan:

… brought home two firearms, along with a bag full of ammunition and showed this to his wife. The firearms were a 12-gauge semi-automatic shotgun and a high power .308 caliber bolt action rifle with a scope on it. The bag contained ammunition for both firearms. The Accused [Duggan] told her that he had found the firearms and ammunition. These firearms along with several other firearms had been stolen from a residence in the community on August 10, 2017 by someone other than the Accused. Ms. Duggan formed the belief that Mr. Duggan was under the influence of both drugs and alcohol.

There were also threats, a 911 call that clearly identified the risk to Butlin, and violence. The account from August 21 continues:

According to the statement, the RCMP responded to the 911 call, went to the residence and spoke to Duggan. However, they appear to have been more concerned with his well-being than they were about his wife’s concern that he might kill Butlin:

They noted that he had been drinking and appeared intoxicated. They spoke with him about his problems and tried to reassure him that his legal jeopardy relating to the Peace Bond application was minimal and it did not constitute a criminal offence. The officers left the property after warning the Accused not to drive since he had been drinking.

There is no record in the statement as to whether the RCMP checked for firearms, or asked him why his wife was worried he would kill his neighbour. Instead, their concern seems to have been his drinking and driving. The statement continues:

A short time later, the officers saw the Accused operating his truck. He was arrested and charged with both impaired operation and operating a motor vehicle while his blood alcohol level was over the legal limit. The Accused was held in custody overnight and released the next day once sober …

Upon his release from police custody the next day (August 22, 2017), the Accused continued to drink. He also prepared suicide notes for his wife and their son which were later discovered. He contacted his wife, who was staying at a Transition House, and told her he was feeling suicidal. He was taken to hospital and discharged after a few hours once he advised medical staff that he was not suicidal.

On August 30, Judge Alain Bégin reviewed the specific allegations in Butlin’s peace bond application, and “expressed concern that the Accused’s conduct details in the Application constituted a criminal offence(s).” He adjourned the peace bond hearing until September 13 to “allow the police to investigate the allegations,” unaware that “the police had already investigated the matter and had determined there were no grounds to lay criminal charges.”

Judge Bégin did, however, instruct Duggan to have no contact with Butlin.

On September 13, according to the statement, Judge Bégin again adjourned the peace bond hearing until October 3, this time because the “Crown indicated they had not yet heard back from the police respecting their investigation into the sexual assault allegations.”

… reviewed Ms. Butlin’s complaint and again concluded there were no grounds for laying criminal changes against the Accused, however, the Accused was not immediately advised of the outcome of this review.

Time was ticking for Susan Butlin, who had already told her friend Suzanne Davis that she feared Duggan would kill her before the next peace bond hearing.

The warning signs were all there, as they had been for weeks, during which both Butlin and Duggan’s wife called repeatedly for help.

The statement of facts lays out the final hours clearly, starting with the evening of Friday, September 15, 2017, when Duggan spent several hours drinking in a bar in Tatamagouche:

When he returned home that evening, Ms. Duggan noted he was very intoxicated. In order to avoid a confrontation, Ms. Duggan left the residence shortly after the Accused arrived home. Between 2:00 am and 3:16 am on Saturday, September 16, 2017, the Accused sent several text messages to his wife. In those texts, he demanded that she return home immediately and noted that if she did not, he would “blow her lying brain out” (referring to Ms. Butlin). The Accused indicated in the messages that he was going to walk over to Ms. Butlin’s residence, but subsequently indicated that all was good and there was no need for a response from Ms. Duggan. He later messaged his wife at 3:16 am indicating that Ms. Butlin could not hide forever and that he would get her.

Duggan drank throughout the day on Sunday, September 17, and into the evening, when he and his wife met in their home to discuss financial details of their separation. But they argued and she left, going to her parent’s cottage. He went to Tatamagouche and drank some more, before returning home.

According to the statement, between 11:40pm and 11:50pm on Sunday night, September 17, Duggan took the shotgun and walked to his neighbour’s house, where he shot her through the window of her front door, killing her.

Davis told the Examiner that just over two hours before that, she had spoken with her friend on the phone, and Butlin told her that Duggan was yelling at her from a window of his house. When Davis told her to call the police, Butlin said there was no point because they wouldn’t do anything.

The Agreed Statement of Facts contains more horrific details of the murder, the effect it had on the two teenage exchange students who were in the house when it happened, and Duggan’s standoff with the police in a cemetery on the outskirts of Tatamagouche the next morning, when he was shot and injured after he opened fire.

The Agreed Statement of Facts makes for very grim and difficult reading, as do the victim impact statements from her friend Suzanne and her family. 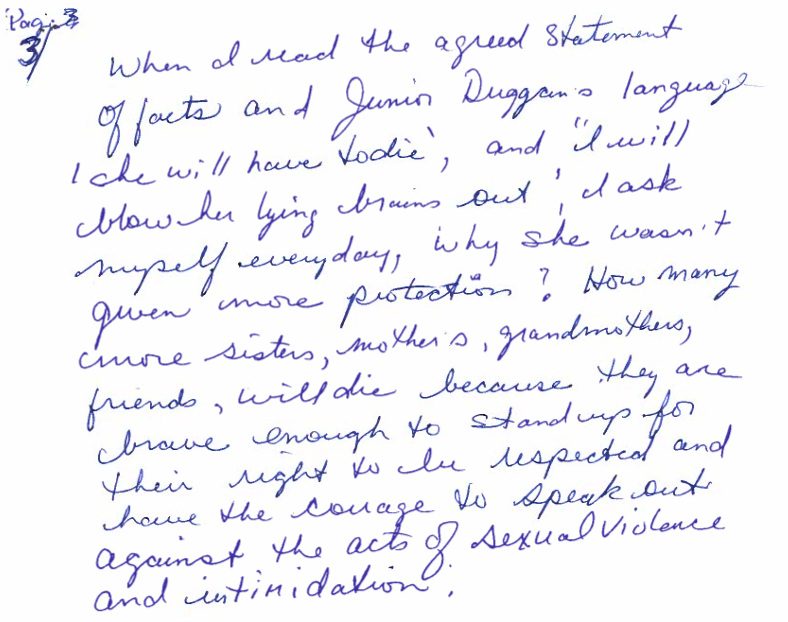 As Butlin’s sister wrote in her statement nearly two years after the murder:

I still ask myself every day why, if a Court Judge sees grounds for further criminal investigation, was her case closed. No grounds? What grounds are required to warrant further investigation from allocations [sic] of sexual assault?

When I read the agreed statement of facts and Junior Duggan’s language “She will have to die,” and “I will blow her lying brains out,” I ask myself every day, why she wasn’t given more protection” How many more sisters, mothers, grandmothers, friends, will die because they are brave enough to stand up for their right to be respected and have the courage to speak out against the acts of sexual violence and intimidation. I will always believe the system failed to protect Susie from men like Junior Duggan. I wish more had been done to protect her.