You are here: Home / Featured / Cooke Aquaculture is eligible for $4 million in “loan forgiveness” to fund a university research chair named after the company 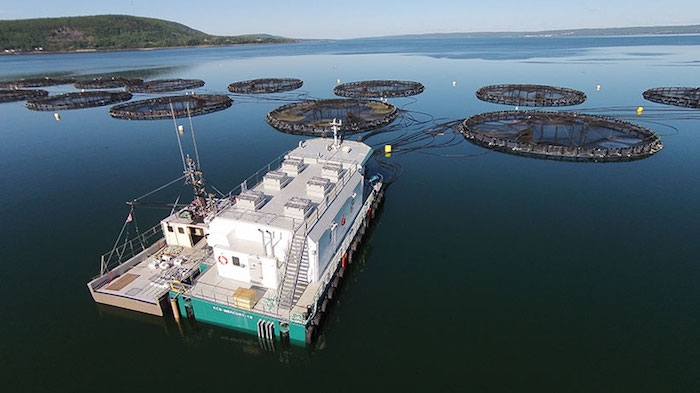 Perennia Food & Agriculture Inc., which is the nonprofit funded by the province and housed at the Bestest Nova Scotian Evah! Ray Ivany campus on the Nova Scotia Community College and which shills for the food industry, has issued a Request for Quotes for a firm to conduct an “Economic Impact Study on the Aquaculture Industry in Nova Scotia.”

Hey Perennia! I’ll do it for free:

Through the Halifax Examiner’s sophisticated and detailed and world-class OFTFRFBF analysis, we’ve learned that the Aquaculture Industry has an economic impact of eleventy billion dollars and employs so many people it’s not worth counting them all.

That’s what you were looking for, right?

Meanwhile, a reporter filed a Freedom of Information Act request asking for the status of a $25 million loan extended to Cooke Aquaculture in 2012. He (the reporter is identified as “he” in the documents but not by name) didn’t receive much, as the majority of the response to his request is redacted. This part gives a feel for it (click here to embiggen): 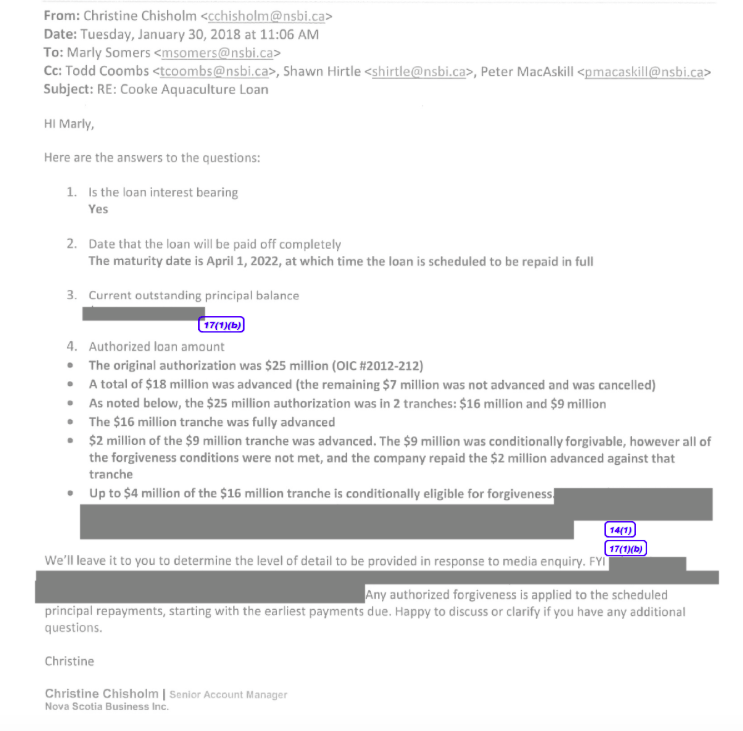 What’s this loan forgiveness about?

A November 2017 briefing note to the minister Keith Colwell explains that:

In 2014 Cooke entered into a partnership with the National Science and Engineering Research Council and Dalhousie University to create an Industrial Research Chair (‘IRC’) in sustainable aquaculture.

Expenditures made by Cooke in relation to the IRC may qualify Cooke for loan forgiveness, subject to the terms and conditions of the loan agreement and authorization by the Minister.

So, up to $4 million of what in the end was a $16 million loan is eligible for forgiveness because Cooke contributed to the establishment of the aptly named Cooke Industrial Research Chair in Sustainable Aquaculture at Dalhousie University, held by Jon Grant.

A December 19, 2013 press release from Dalhousie gave details of the establishment of the chair:

Cooke Aquaculture will contribute $160,000 annually for 5 years, totaling $800,000 to match the NSERC contribution. Cooke will also contribute in-kind resources, most specifically boat and diver costs toward the project. Cooke will not only provide funding support for the IRC program, it will provide employment opportunities in the short term (co-op, summer) and in the longer term for graduates as they complete their research programs.

In short, Cooke contributed $800,000 to the establishment of a Chair named in its honour and which is held by an industry-friendly researcher. Now, it looks like at least that $800,000 will in effect be paid by Nova Scotia Business Inc. via the loan forgiveness. (Because the documents are so heavily redacted, we don’t know if more of the $4 million eligible for loan forgiveness is related to the research chair.) 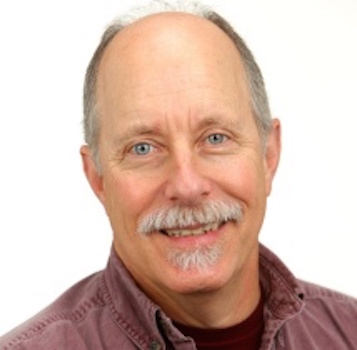 Is it fair to say Grant is industry-friendly? Globe & Mail reporter Jane Taber wrote on the establishment of the research chair way back in 2013, quoting critics:

In the same way the land provides nutrients and sunshine for farmers to grow crops, Dr. Grant, 59, says the ocean provides “clean water and oxygen and the right temperature to grow Atlantic salmon.”

The Atlantic Salmon Federation, however, disagrees with Dr. Grant’s statements dismissing concerns about the industry. “It is concerning that Dr. Grant is beginning a five-year research project biased enough to say that critics who argue that open-pen salmon farming destroys the environment are relying on ‘rumour’,” Holly Johnson, of the Atlantic Salmon Federation, wrote in a letter to The Globe and Mail.

“Escapes are frequent occurrences in open-pen fish farming. Escapees enter rivers, and breed with wild salmon, causing reduced genetic diversity and fitness in wild populations. The prevalence of disease and parasites increases with the high density of fish in pens that is common to salmon aquaculture and spreads to wild fish, subsequently threatening the persistence of wild populations.”

This can quickly degenerate into a never-ending back and forth, but I’ll just note two things.

First, Grant has an impressive publication record in respected journals.

But, second, Grant’s appointment to the chair was announced in December 2013. A year before, in a letter published in the Chronicle Herald on February 29, 2012, Grant scolded critics of open pen aquaculture. That’s not to say scientists shouldn’t take principled stands on issues they study — indeed, they should. But we should at least question how Grant was selected for the chair. Are there equally qualified scientists who are critics of the industry who were passed over? I don’t know.

I’ll let others debate Grant’s science, but for me the issue at the moment is that Cooke got a research chair at a public university named after the company, and lots of press releases and news articles celebrating the $800,000 “gift” of the company to establish the chair, only to have that $800,000 secretly reimbursed by the government via the loan forgiveness.

Further, my strong suspicion is that the rest of the $4 million eligible for loan forgiveness is the “in-kind resources” contributed by Cooke to the Chair — the “boat and diver costs” and possibly even the “employment opportunities in the short term (co-op, summer) and in the longer term for graduates as they complete their research programs.” I can’t say for sure, because the documents are redacted, but it sure looks like another $3.2 million of the loan is being forgiven so that Cooke can hire its own employees.

Is this a great province or what?

If the government is going to fully fund the chair, can’t we at least take Cooke’s name off it? As is, it amounts to free advertising.

At approximately 9 a.m. this morning, Colchester District RCMP, EHS, Shubenacadie Fire and Emergency Services, Milford and District Volunteer Fire Department and multiple other fire departments responded to a house fire on Heritage Ln. in Shubenacadie East. A civilian was first on scene and attempted to enter the home but was pushed back by flames and smoke.

Investigators located human remains at the scene. Colchester District RCMP will remain on scene with the Nova Scotia Office of the Fire Marshal while an investigation is conducted. The Nova Scotia Medical Examiner Service will conduct an autopsy. The cause of the fire remains under investigation.

Public Accounts (Wednesday, 9am, Province House) — Auditor General Michael Pickup will talk about the reception and implementation of his 2014 and 2015 recommendations.

For decades, classical and intuitionistic logics have served extensively in the design of programming languages and analysis of programs and specifications. However, the recent advancements in quantum computing, in general, and the likely arrival of scalable programmable quantum devices in the near future, in particular, have motivated the research and development of quantum programming languages — for which classical and intuitionistic logics are not sufficient. For these languages to be useful, they must, among other things, be able to handle quantum information as a non-duplicable resource. Linear logic, being a resource-sensitive formal system, provides an appropriate framework for the study of such languages. In this talk, I will discuss the remarkable relationship among typed linear term calculi (the bases for functional quantum programming languages), constructive logics, and categorical models, with an emphasis on those corresponding to the intuitionistic fragment of linear logic. 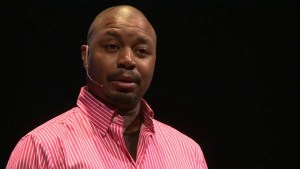 Self-publishing Workshop (Wednesday, 11:30am, Room 1007, Rowe Building) — Toronto poet and performer Dwayne Morgan will address his experiences with self-publishing, the challenges self-published writers face, and the changing landscape of publishing and book consumption in Canada. 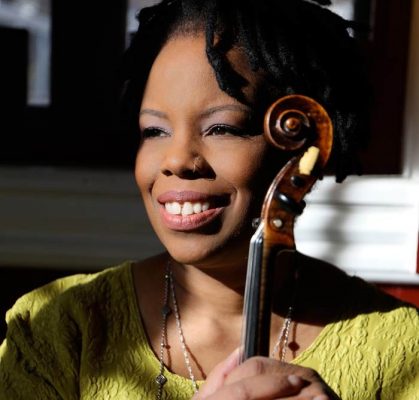 This panel discussion will trace from the Marshall Commission (1988-9), on which retired Sociology & Social Anthropology (SOSA) professor Don Clairmont served, to work that academics and community activists at Dalhousie and beyond are doing in the area of Black and Indigenous justice. Panelists will reflect on the university and department’s entanglements with social justice issues, the impacts these have had on Black and Mi’kmaq Nova Scotians, as citizens and students, and the past and present state of relations between dominant Nova Scotia institutions (education, justice) and Black and Mi’kmaq communities.

This event will feature a walkabout of the Dalhousie Art Gallery, and students of CRWR 3200 will give poetic responses to visual artist Marlene Creates’ exhibition “Places, Paths, and Pauses,” on display at the gallery through May 6. 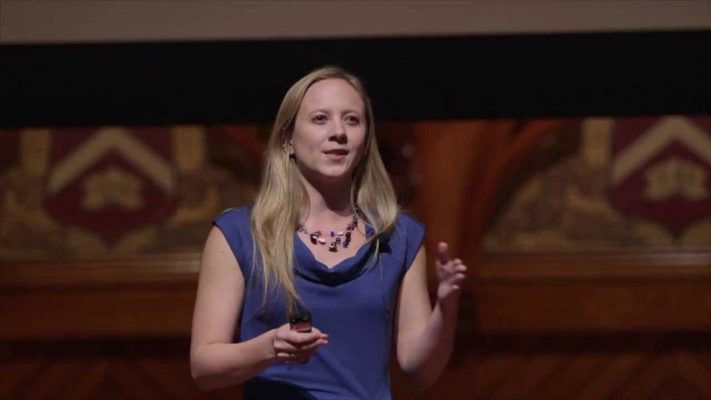 Making Up Minds: Thinking With, About, and For Humans (Wednesday, 7pm, Alumni Hall) — Stephanie Dick, a King’s grad and author of Of Models and Machines, will talk about the development of Artificial Intelligence.

Some days there just isn’t much news, and there’s no sense pretending there is, so I went off on the Cooke thing.