You are here: Home / Featured / Churchill: we won’t move people with underlying health issues up the vaccination queue, but we’ve done that for cops 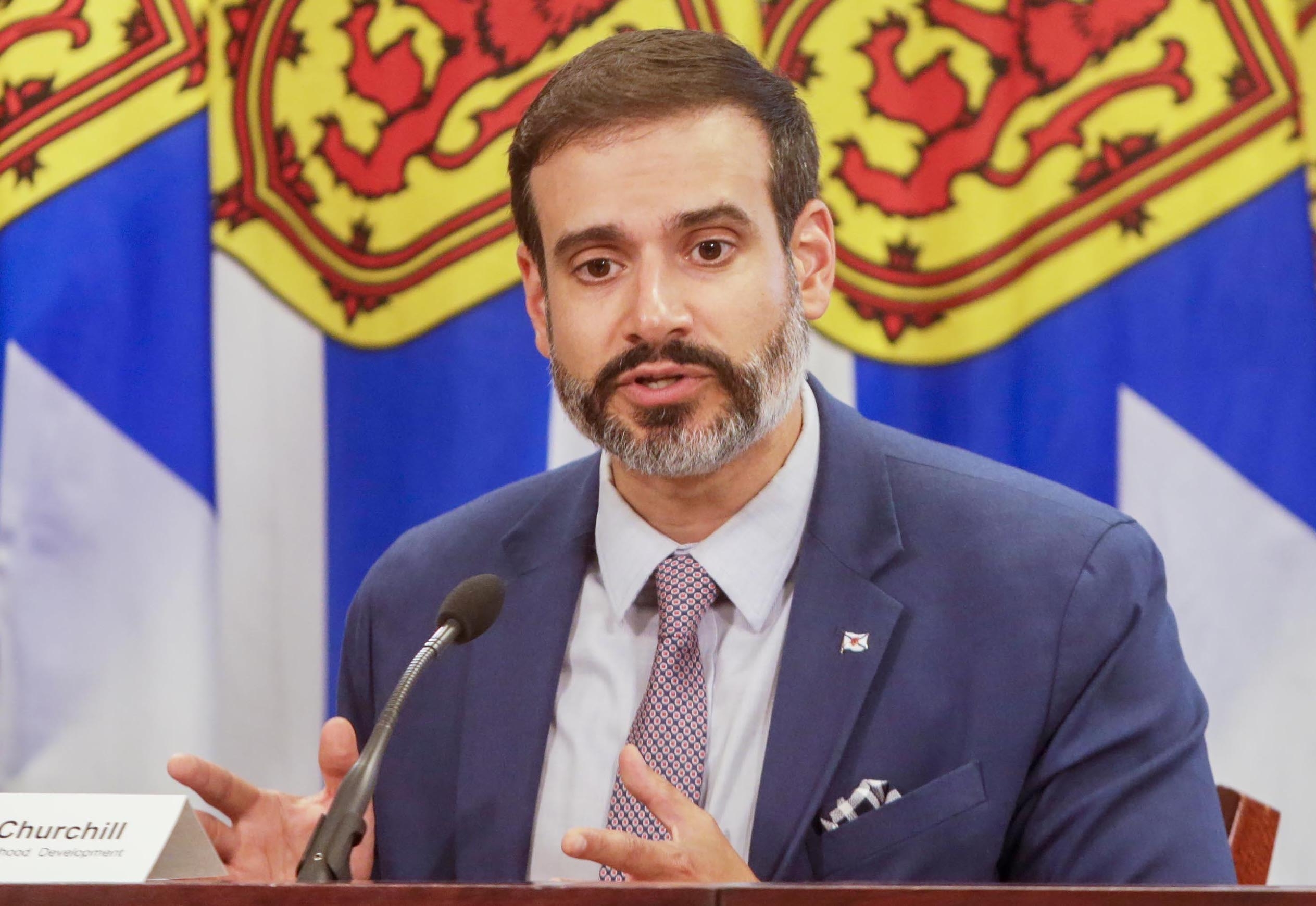 A woman in Nova Scotia has died with COVID-19. She was 80 years old or older and lived in Nova Scotia Health’s Central Zone. She is the 66th person to die from the disease in the province, and the first since August.

Cops move up the vaccination queue

At the COVID briefing the next day, March 9, I asked Strang about this, and he explicitly said police officers would not be moved up the vaccination queue. “If you look across the country, we are not seeing frontline police officers being a group that jumps out as having excessive amounts of COVID cases,” explained Strang.

Strang has been consistent on this: besides health care workers who may deal directly with COVID patients, Nova Scotians will be vaccinated by age cohort, because the highest risk factor for death or serious illness from the disease is age. Moreover, Strang has said repeatedly, carving out exceptions based on profession or even underlying health issues would slow down the entire vaccination pipeline such that it would delay the province reaching herd immunity. The best approach, said Strang, was to quickly vaccinate as many people as possible, and the best way to do that is by age cohort.

So it came as a surprise to me when over the weekend, it was brought to my attention that the province had quietly moved frontline police officers to Phase 2 of the vaccine rollout plan, before the mass vaccination of Phase 3, effectively moving them up the vaccination queue.

The issue was underscored today when Health Minister Zach Churchill rejected repeated requests that people with underlying health issues be moved up the vaccination queue, but then quickly defended doing exactly that for frontline police officers.

Churchill made his remarks at the post-cabinet questioning by reporters. Here’s the exchange between Canadian Press reporter Keith Doucette, Churchill, and myself:

Doucette: Minister Churchill, as you know, the province has not reached out to any specific special cohort in vaccinating people with underlying conditions, choosing instead to do a linear, aged-based rollout. Dr. Strang said that… we’re wondering about resources, this a matter of resources in terms of being able?

Churchill: No. It’s about getting to herd immunity and the fastest means possible. So everything we’re doing now is to build a system so that we can get to herd immunity in the most expedited way that we can. Listen, I really do understand the concern from various communities, folks that have underlying health conditions. You know, people are dealing with fear and it’s understandable why those folks would would want to get a vaccine sooner. I do think, though, the best thing that we can do for them and for everybody is to get to herd immunity as quickly as we can. And I think we do have a very good plan for that. Age is the single greatest risk factor when it comes to complications and mortality with covid-19. And I believe that the science that does support this and this, this is going to help us get to that light at the end of the tunnel where a critical mass of Nova Scotians are vaccinated and we can hopefully get back to the most normal, a normal state of affairs.

Doucette: So no exceptions? I mean, we’ve spoken to patients who are doing specific treatments and may only have a certain window where they might be able to take the vaccine otherwise, where they may have gotten it quicker. They now have to wait because of their treatments even longer. They may theoretically have to wait even longer. So there’s there’s no consideration of that?

Churchill: I mean, … we’re going to take the lead from from Public Health on this. And so I do think that the best thing we can do for everybody is to get to that herd immunity, right? And we’ve got a very good plan in place, I think to achieve that in the most expedited manner possible. Supply is going to be amping up every single week now. Folks are going to see more vaccine clinics opened up in communities across this province, more access points through doctors’ offices, through pharmacies, through community clinics. And we’re going to start moving through this process more rapidly as as the weeks progress here. So I know people are concerned. They have a right to be concerned, but I do want them to trust that we we do have a very good plan in place that is going to give us therough that tunnel for everybody.

Doucette:I believe Nova Scotia is the only province to basically do it this way. Manitoba was in that boat but as I’m aware, the other day they changed their mind and they’re now going the route of some other provinces. We’ve been told that low case numbers here enable us to do this, but yet we’ve got our neighbours who also have low case numbers actually doing what we’re talking about. So given that you said that perhaps once things ramp up, might this be revisited in any way, given that?

Churchill: Well, llisten, we’re going to keep discussing all the issues around vaccine rollout with with Public Health. Myself and the premier get regular updates on what the rollout is looking like and if there are any changes to our strategy that’ll be communicated to the public. But I really do have a high level of confidence in this. And I think Nova Scotians are very antsy to get these vaccines in their arms. And I think that’s a very good thing. I think we’re going to have a very good turnout here. And we’re we’re building a system that’s going to help us get to where we want to be the quickest route possible. We’re also the only province that has a centralized booking system. So the infrastructure is in place here. Supply is ramping up, and we’re going to start moving through vaccinations more rapidly, more rapidly every single week. And I do think focusing on that single greatest risk factor age allows us to get those who need it the most quickly, but also creates a system whereby we’re going to be able to deliver this efficiently and and then quickly.

Churchill: The police officers made a case. And it was, as I understand it, again, I wasn’t in those meetings, but it was around the points of contact that they had where there’s no control over social distancing with members of the public. There’s, you know, volatility in terms of who they’re interacting with, so they made a case for front line police officers who are working on the streets and interacting with the public. And in that case, was was compelling for Public Health. But because we, you know, we don’t want there to be someone that contracts that and then inadvertently through their work.

Bousquet: That’s a reversal of Dr. Strang said. Why wasn’t there an announcement made or a release made related to it?

Churchill: I mean, I believe we’ve we’ve discussed that. But maybe that’s a that’s a question better asked Dr. Strang on that one.

Doucette: To circle back to my colleague’s previous question, I want to make sure I heard you right. So if you’re organized like police and you can make a compelling case to Public Health, you can grant exceptions. Is that what you’re saying there?

Churchill: There’s been professions that are brought into Phase 2 for for good rationale. So our health care providers, our home care providers, folks that have a lot of points of contact in the broader community. And so we are prioritizing certain professions because of the risk if they do get sick and the risk of, you know, having situations where there’s, there’s, there’s, there are super spreaders out there. So there were adjustments made to this. But that is not taking away from the overall strategy that is focused on on age. And I really have a lot of confidence in this process and I believe that as we see supply ramp up, this is going to continue to work smoothly. And and that’s my hope. And we’re going to keep monitoring it and that we’re going to to get to herd immunity in this province as quickly as possible.

Not not prioritizing vaccinations for people with underlying conditions is absolutely inexcusable and a huge failure.

Dear @zachchurchill I am asking that ALL health care workers move up the vaccination queue ahead, because really, it is ridiculous they havent received it already. https://t.co/BRrG13gaju

my RAGE. meanwhile my TRUCKER coworkers can't get one despite keeping this fucking province running for the last year?! the fucking AUDACITY. https://t.co/5wqx8F4q52

Hey, @zachchurchill, frontline (like, actual frontline) worker here – I gotta tell ya -your decision to sneak cops in to vaccination has me pretty hot under the collar. I work very closely on a day to day basis with marginalized folks and you don't see me begging to jump the line https://t.co/49XKty3rjP

Otherwise, three new cases of COVID-19 are announced in Nova Scotia today (Thursday, March 18). All three cases are in Nova Scotia Health’s Central Zone — two are close contacts of previously announced cases and the third is related to travel outside Atlantic Canada.

There are 17 known active cases in the province. One person is in hospital with the disease, but not in ICU.

People who are 80 or over and who were born in the first 8 months of the year (January 1 to August 31) can book a vaccine appointment here.

Here are the new daily cases and seven-day rolling average (today at 1.7) since the start of the second wave (Oct. 1):