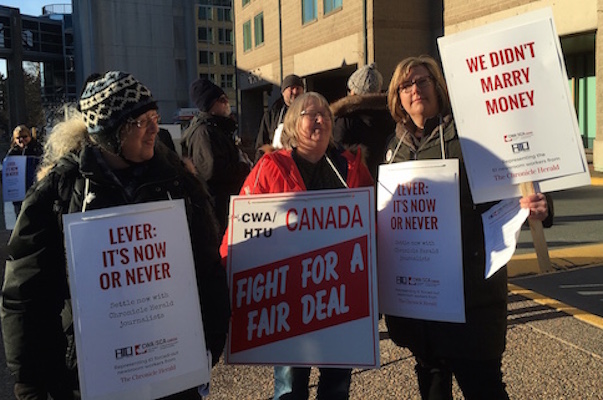 The president and CEO of the Chronicle Herald was a no-show yesterday at a “Game Changers” event hosted by the Halifax Partnership at the Harbourfront Marriott hotel.

Herald boss Mark Lever had been scheduled to hand out cash awards to three winners who entered 30-second videos of themselves in a “Pitch It!” competition aimed at helping new university and community college graduates introduce themselves to Nova Scotia employers who might actually offer them a job.

Figures from Statistics Canada show the province has been losing an average of 1,300 people between the ages of 20 and 29 for the past two decades. The Chronicle Herald newspaper is one of 10 corporate sponsors of the “Game Changers” initiative launched last November by Halifax Partnership to try to stop the outflow of young professionals to job opportunities elsewhere.

On the sidewalk outside the hotel where Mark Lever had been expected to attend the upbeat event, about 40 of the Herald’s 59 reporters, editors, and photographers, now into their sixth week of a bitter strike, handed out leaflets that described their current boss as “more of a game-ender than a game changer.” 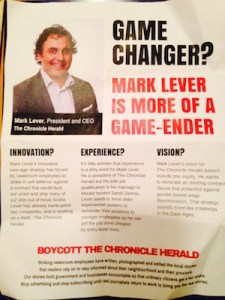 “We’re picketing the event because Mark Lever claims he is ‘an innovator’,” said Ingrid Bulmer, a photographer with 20 years’ experience at the Herald and president of the local Halifax Typographical Union. “He talks about keeping good jobs in Nova Scotia at the same time he is laying off senior people at The Herald and outsourcing the website content to a company in Ontario.”

A spokesperson for Halifax Partnership said Lever cancelled the day before the event. “He opted to bow out so as not to become a distraction for the event,” confirmed Ron Hanlon, CEO of Halifax Partnership. Hanlon presented the cash awards to the winners instead.

In an open letter to its readers dated January 19, the Herald president wrote, “We are asking our newsroom team to produce a newspaper the way other newspapers are produced in Canada.” Lever acknowledged there will be layoffs, adding that many of the 18 people affected would have the option of working for another (non-union) segment of the company.

“This isn’t about changing with the times,” Bulmer fired back. “It’s about paying people less, with some editors taking a twenty thousand dollar a year hit. The end game is a public relations platform: with advertorials that look like news.”

The union leaflet says “Lever wants to force older, experienced workers to surrender their positions to younger employees so he can get the job done cheaper by entry-level hires.”

That’s a touchy issue for dozens of Journalism School graduates eager to land their first job at a newspaper that’s been advertising to hire “team editors” for its Production Hub within the Content division. The Herald has said even with the concessions it is demanding from its workers — a longer work week for lower pay, with fewer people — it will still continue to have the highest wages and largest newsroom in the region..

“I didn’t marry money” said another sign, a pointed reference to Lever, whose previous job was running an indoor tennis facility that folded before his marriage to Sarah Dennis, the publishing heir to the family’s 140-year-old newspaper business. The handout from the union states “Lever has already bankrupted two companies, and is working on a third — The Chronicle Herald”.

Bulmer says no negotiations have taken place since the start of the strike, although the lawyers for both sides in the dispute were in touch by telephone last week.