You are here: Home / Commentary / Christmas in prison 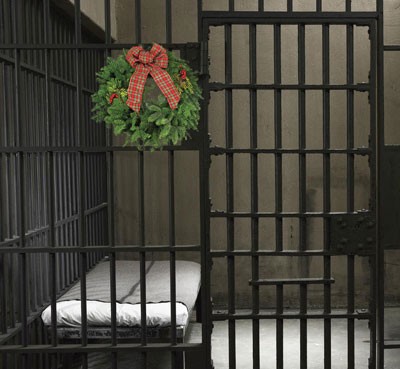 What do you think about when you think about Christmas in prison? Perhaps the image of a prisoner alone in his cell looking off into the distance and hearing the faint sounds of carollers in the local village, or perhaps the old turnkey giving his once per year show of mercy to his wards and allowing them an extra ration of gruel.

Well, maybe that was the way things were in the past and maybe that rings true to someone somewhere today, but it has not been my experience in the lifetime that I have spent inside the confinements of the prisons of this century.

It might seem strange to most that there could be unity and joy in a prison, but that is exactly what I thought I had found in the first years of life inside.

Men would decorate their cells with handmade crafts, much the same as was done before the modernization of Christmas. Secret Santa draws were made well in advance and careful thought was given to each gift. Men who were able-bodied joined the church choir and attended practice without missing a note; the Christmas service was a big event.

There was also the event of the Christmas Family Social Day. That was to be the event of the year, and the preparations were months in the making. Jobs and tasks were assigned to men who were all too willing to do whatever they could to make the day one to remember for families that were coming.

The best cooks and helpers were set to put on a feast with all of the trimmings, others formed committees to design decorations and set up setting arrangements for all. The band was chosen for the event and the songs that would be played carefully considered. Activities for the children were carefully thought out and always ended with a visit from dear old Saint Nick and his sack full of gifts. It was a certainty that every child had a smile on their face and a memory of joy spent with their father, brother, or uncle on that day.

And then in the days that followed life returned to the reality of the environment that has to be faced and the loneliness that follows.

Christmas Eve may well have been one of the worst days ever spent in prison, feeling that you are alone and forgotten, a failure to everyone — including yourself — and that your family was enjoying the festivities as though you don’t exist. Men go to their cells and close the door to block out the noise and the reminder of what life is at that very moment, to prevent the hollow greetings offered from passersby and be alone with their thoughts. For some, nothing is able to lift them out of that weighted burden and they look for some way to not feel.

And this is when things become real in prison. In years past, self harm (slashing various body parts or suicide by hanging) was a real problem and was watched for at Christmas more than ever. You checked on your friend to make sure he was clear-headed, that he wasn’t giving away his belongings or finding dangerous ways to cope with being away from home.

In today’s prisons, there still exists those concerns, but the way people cope with their emotions has changed. The availability of the telephones helped with providing contact to the outside world and helping to maintain the feeling that you are involved. That you are still a part of the life you were banished from.

But there is no replacing face to face visits with your family. In years past, the visiting room would be at capacity with a waitlist for the chance of replacing a visitor who cannot attend. Yet at this institution this year, there are very few visitors over these holidays, as so many have been discouraged by the prison system from even attempting to come.

Yes, things have certainly changed over the years, in the way that Christmas is experienced by both the inmates and administration. There is no longer the effort to show joy by the men and how they decorate their cells. I cannot say what year it was that I last heard of the choir being formed for the holiday services. The Christmas Family Day at this institution last year consisted of five prisoners with visits and no children attended. The food that was provided was a two-hour-old prison hamburger and a boiled potato. The decorations consisted of a coloured tablecloth. This year there was no family social event at all.

The efforts made by the institution to alleviate the pains felt by being away from one’s family have disappeared also. No longer are there Christmas treats in the way of baked goods, not so much as a shortbread cookie. The Christmas meal will consist of a pre-frozen turkey meal with a little portion pack of cranberry sauce. The gravy will be tasteless, as we are not permitted salt with our meals at this institution. There will be no pie for dessert, only an apple or a banana will have to do.

I personally think that it is inherent in all of us to find a way to express the human need of kindness unto others at this time of the year, no matter where you are or who you are with. A gift is not required to have physical existence, as the mere mention of Merry Christmas by that person closest to you or that unexpected gesture from the grouch next door could evoke gratitude that will last long past that of the manufactured gift. But, more often than not, the person that is away in the prison system is forgotten and there is no efforts made by the friends and family that were once part of your daily life to show that you are still thought of at this time.

And the daily check for Christmas cards in the mail will find you left wanting more often than not. This has just become the norm for me over the years, and I hold no grudges and I am truly surprised on those rare occasions that some random person remembers me and makes that small gesture of inclusion by sending a Christmas card. I also must accept some of blame for that, perhaps as I have not sent off any Christmas cards to them either. It takes an entire day’s pay to purchase a greeting card that usually find no return value.

So, I really shouldn’t have any expectations. Christmas will pass again this year without my friends and family. As it did last year and as it will next year, and the year after that. I will continue to look for those cards and the shared moments that must serve to fill my need to exist.

Perhaps if you know someone who is away from you at this Christmas, you can take just a little time, and the smallest of efforts, to let them know that they are not forgotten.