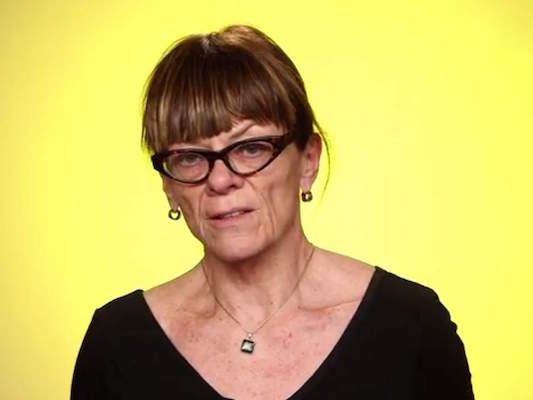 Tarrah McPherson served notice Thursday that she intends to sue Blatchford and Postmedia for a column that ran in The National Post and other Postmedia newspapers, online on March 17, 2017 and in print editions the next day. It bore the headline: “Again, a man’s life left in ruins, while his sexual-assault accuser goes about hers.”

The column dealt with a highly publicized case of alleged sexual misconduct at Mount Saint Vincent University in Halifax. Instructor Michael Kydd resigned after admitting to a sexual relationship with McPherson, who was then a student. The nature of that relationship is disputed.

Until today, McPherson has not identified herself publicly.

“I have tried to engage processes that should have respected the privacy and integrity of everyone involved — his [Kydd’s] family, my family, even the institutions involved,” writes McPherson in a statement given to the Halifax Examiner.

“I did not choose to name anyone publicly and I have fought for my right to privacy,” McPherson continues in the statement. “However, now I have decided to sacrifice my privacy and attach my name to a Notice of Libel served on the National Post and Christie Blatchford.” 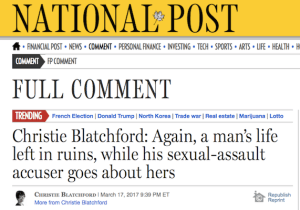 In the notice served to the Post and Blatchford, McPherson’s lawyer, Brian Radnoff of Lerners LLP in Toronto, writes that Blatchford defamed McPherson and made a number of errors in the column.

Blatchford wrote that “Postmedia has managed to confirm many significant details about Kydd’s case” in suggesting that the information in the article is accurate. She doesn’t name these sources or provide any information about them.

To boot, Blatchford made the journalistic faux pas of not seeking comment from McPherson.

Radnoff says that Blatchford “made no attempt or insufficient attempts to verify the information in the article with Ms. McPherson.”

The notice served on Postmedia, The National Post, and Christie Blatchford on Thursday contains a laundry list of alleged faults with Blatchford’s column. Click here to read the Notice.

The notice was filed in accordance with the Libel and Slander Act of Ontario within the six-week deadline for filing a notice in that province. Radnoff also filed it in accordance with the Defamation Act of Nova Scotia, preserving McPherson’s right to proceed with a lawsuit in either province. The National Post will have an opportunity to respond to Radnoff before he is able to proceed on McPherson’s behalf in Ontario.

Kydd is not listed as a defendant in this notice of libel, but he did file a lawsuit against McPherson in January for defamation, malicious prosecution and breach of privacy. 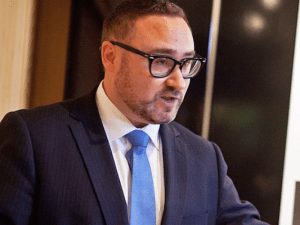 One person Kydd is not suing is Glen Canning, who tweeted the redacted photo of Kydd — without identifying him — in the morning of Jan. 8, 2015 and removed it later that day. Kydd identified himself as the person in the photograph at a news conference late in the afternoon on Jan. 8, 2015.

The allegations in Kydd’s lawsuit have not been proven in court. In fact, as of this writing, McPherson hasn’t yet been served with a notice by Kydd’s lawyer, Donna Wilson of Toronto.

Michael Kydd said in an e-mail that he was following Wilson’s advice and would not comment because of his lawsuit before the courts.

Editor’s note: The Halifax Examiner is a reader-supported independent news site dedicated to investigative and adversarial journalism.To help us continue our work, please consider subscribing to the Examiner. Just $5 or $10 a month goes a long way. Or, consider making a one-time contribution via PayPal. Thanks much!