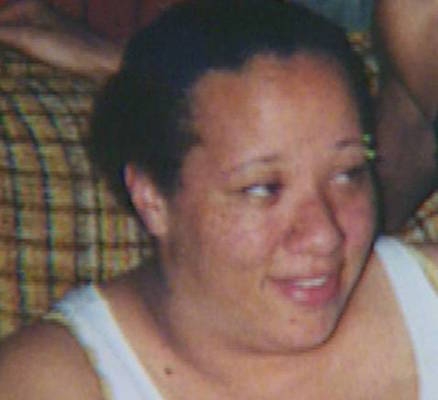 Yesterday, Halifax police issued a release saying they had laid charges in the 2005 homicide of Naomi Kidston:

On June 7, 2005 at 1:30 p.m., police responded to an address on River Road in Halifax. Upon arrival, officers located 26-year-old Naomi Kidston deceased inside an apartment. Her death was ruled a homicide. Through the investigation, officers determined that Naomi was last seen alive in the early morning hours of June 7 at the residence where she was found deceased.

As a result of the ongoing investigation, officers, with the assistance of officers from the Saint John Police Force, arrested Donald Peters without incident at approximately 8:40 a.m. yesterday on Stanley Street in Saint John, New Brunswick. He was brought back to Halifax yesterday for questioning and was held in custody overnight.

Donald Murray Peters, 50, of Saint John, New Brunswick, has been charged with second degree murder in relation to Naomi’s death and is scheduled to appear in Halifax Provincial Court today to answer to the charge.

Kidston, 26, was found dead in her apartment on River Road in Spryfield on June 7, 2005. An obituary printed at the time said she was involved in the Halifax church community, feeding the homeless as a volunteer at St. Mary’s Basilica Catholic Church, working as a childcare provider at St. George’s Church and as a lunch monitor at Cornwallis Street Baptist Church.

Police said Peters and Kidston knew each other, but weren’t intimate partners or in a domestic relationship. 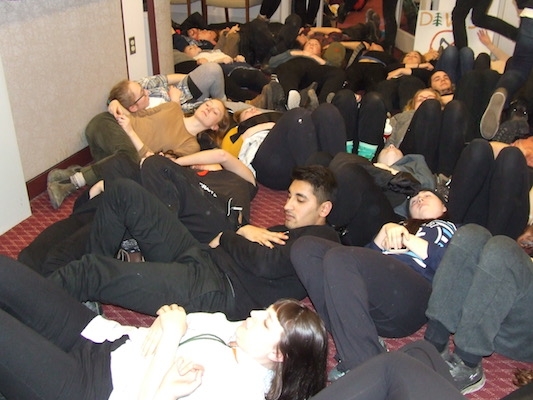 Earlier this week, students with the group Divest MTA began a permanent encampment in the academic quad at Mount Allison University to draw attention to their efforts to get the university to divest from companies that profit from fossil fuel extraction. On Wednesday the students issued a press release:

In an email to the Board of Regents which Divest MTA obtained, Mount Allison president Dr. Robert Campbell explicitly asserted that the University had no plans to engage with Divest MTA directly or negotiate the camp-out’s presence.

After two days with no response from the University Administration, Divest MTA has moved its occupation into the administration’s space in order for students to engage directly.

The upper floor of the Mount Allison administration building rang with songs, chants and laughter today after more than 50 students moved in seeking a face-to-face meeting with university president Robert Campbell.

As the students listened in the outer room, Divest MTA leaders Tina Oh and Alex Lepianka asked Campbell to begin the process of shedding endowment fund investments in the fossil fuel industry. They called on the Mt. A president to recommend such divestment to the university’s Board of Regents.

“It’s not my role,” Campbell answered.

“It is your role,” Oh responded. “As president of [this] public institution, students get to decide what is your responsibility,” she added.

“Thank you for being so passionate about it, but I disagree,” Campbell said, adding that as president, he must listen to all constituencies, including students, faculty, alumni and donors. He noted that students are represented on the university’s governing bodies and have a voice in their decisions.

Lepianka said the process is undemocratic adding that after four years of campaigning, students have gotten nowhere on the issue of severing the university’s ties with oil and gas.

“We live in a society where not everyone agrees,” Campbell said. “You have not got the result you wanted. You win some, you lose some.”

Both Oh and Lepianka argued that as president, Campbell has a moral responsibility to sever the university’s ties to fossil fuels when the industry threatens the lives of so many, including the indigenous peoples the university claims to respect.

“I don’t agree with your language or your characterization,” Campbell said.

In the aftermath of the meeting, several students wept.

Naia Noyes-West said that students, unlike older people, were born into a world where the devastating realities of climate change already existed — realities that will weigh heavily on them and future generations.

She added that as students at Mt. A, they were learning about such issues from their professors.

“We learn about these awful things,” she said, “and then are expected to do nothing.”

After the meeting, and as Campbell was leaving the building, the students staged a “die in” to represent victims of climate change. The students ended their occupation of the building at 6pm. 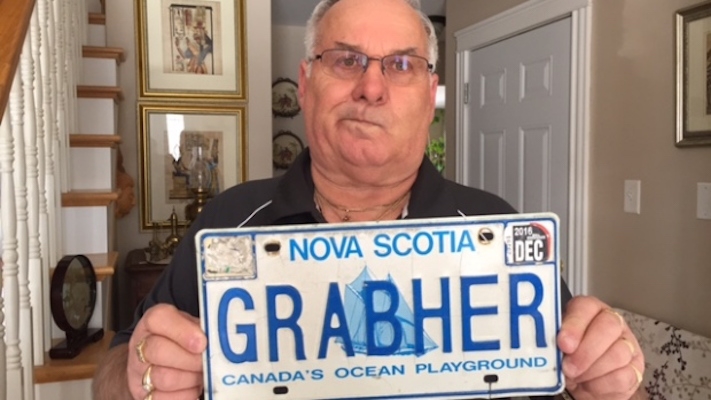 “Mr. Grabher wants his licence plate back,” reports Yvonne Colbert for the CBC:

A Dartmouth man is furious that after 25 years the Nova Scotia Registry of Motor Vehicles has cancelled his personalized licence plate with his last name Grabher on it, following a single complaint.

Lorne Grabher is of German heritage. He said he bought the plate as a gift for his father’s 65th birthday. His father passed away in the 1990s and the plate has remained in the family.

Last December, he received a letter telling him the plate would be cancelled in January because the public cannot be expected to know it is his last name and “can misinterpret it as a socially unacceptable slogan.”

“I was taken aback. How can you say my name is a slogan when it is not?” Grabher told CBC News.

Colbert scores extra points for her photo of Grabher (above), which I’ve dutifully alerted the folks at Angry People in Local Newspapers about.

1. Christ, what an asshole!

Look who has his own piñata! Coyoacan market, Mexico City. pic.twitter.com/XqcNt5ukTr

But speaking of Trump… there’s an old schtick (invented by the blogger Charles Lavoie) that “any New Yorker cartoon could be captioned with ‘Christ, what an asshole!’ with no loss of comedic value.” Here are a couple of examples that Lavoie used: 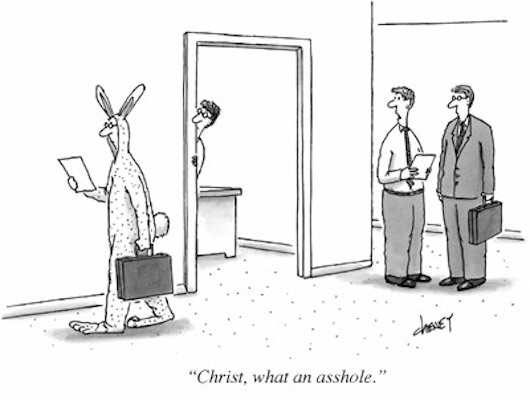 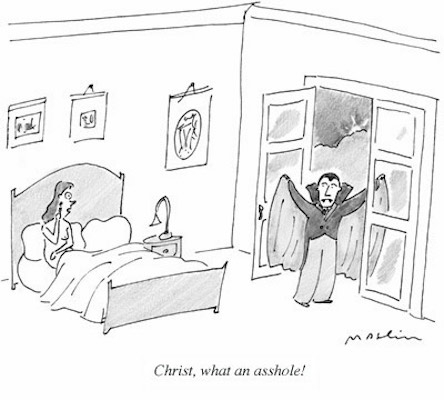 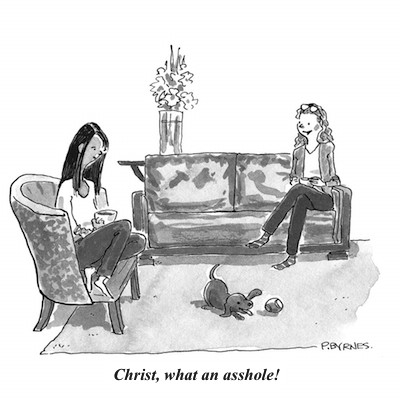 For some reason I was thinking of this yesterday as I read this part of Time Magazine’s interview with Donald Trump:

Hey look, in the mean time, I guess, I can’t be doing so badly, because I’m president, and you’re not. You know. Say hello to everybody OK?

Christ, what an asshole!

Not everyone has great success when leaving for Alberta to secure work. Working in that province presents many challenges.

Affordable housing, the cold winters and the fact that the locals tend to keep to themselves are just a few things one needs to consider.

That latter part can be a bit of a culture shock for anyone coming from sociable “small town Nova Scotia,” but not necessarily in a bad way. One may simply need some time to adjust.

From what I’ve learned, some companies in Alberta don’t like to pay their employees what they are entitled to such as general holiday pay and overtime pay, all for the sake of corporate profits.

Also, they tend to “work your fingers to the bone.” Such experiences I have dealt with when working in the private security sector.

One such experience resulted in a not-so-positive outcome when it came to receiving my entitled general holiday pay. Rather than doing the right thing, both my employer and my representative from Alberta Employment Standards hid behind rules that they interpreted to their favour. Was this because of my employer’s close business relationship with that province’s government of the day?

To appeal their decision, I would have had to return to that province at my expense. The issue should have been handled appropriately by them the first time around.

The point I am trying to make here is if you’re considering going to that province for work I strongly recommend that you search for and acquire employment in a unionized environment. One will then have employee rights available by way of a contract, a more balanced workload and the union representation to back you up when your employer tries to pull the wool over your eyes.

My hope is that you have better success than I did. 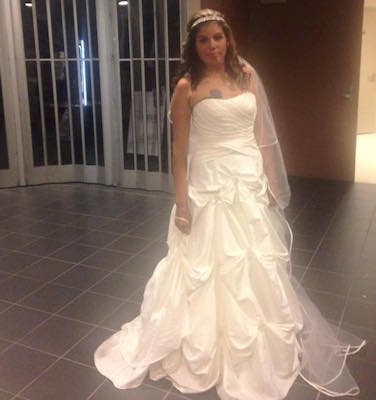 Halifax Buy, Sell, Trade and Give Away is a Facebook page for, well, people buying, selling, trading, and giving away stuff. I only found out about it because John Williams (the last owner of Frank Magazine who understood that the mission of the magazine was to punch up, not down) pointed to some ridiculous argument that I forget now, but I’ve been hooked to the page ever since.

Anyhow, I won’t bother you with the ins and outs of the page, except to point to yesterday’s post by Christina Johnson:

Wedding dress for sale — worn once by mistake.

Please help me remove this beautiful dress from my life, it looks stunning on enough to distract me that I was about to enter into a marriage with a complete asshole.

Dress is in excellent condition, unlike my marriage. It has been cleaned of any bad luck, I know because now I look at it and I feel so happy, and a sense of freedom falls over me.

I’m hoping this dress isn’t seen by all your family members because then you would have the same luck as me to find out your husband has been sleeping with your little cousin, so just don’t invite everyone to the wedding!

Not getting married?? That’s okay you can wear this dress on different occasions:

It would look great while you are washing dishes, catching the bus, in the line at the DMV as you gotta change your name back to your maiden name because the sight of his last name just totally disgusts you and you feel more nauseated then you did when you had that drunken one night stand back in 05′.

Wear it and run down the street after random men yelling “I love you, please come back to me.”

Wear it to the pub people would buy you celebration drinks yayyy free liquor! Better yet wear it to the pub and fake cry and see the sympathy drinks come pouring in from every guy who is there looking to be that rebound guy. This dress would have itself paid off in booze in one night.

If you want to see this gorgeous dress just shoot me a message and I’ll take a couple pictures for you!!! 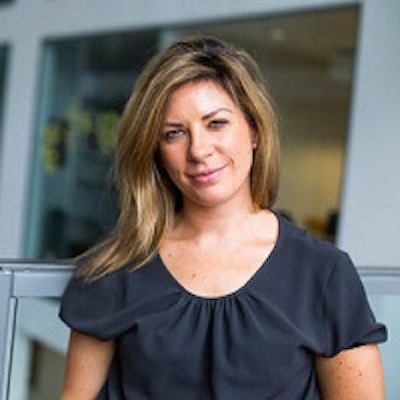 (Dis-)Integration (Friday, 3:30pm, Room 204, Weldon Law Building) — Elaine Fahey, from NYU Law School and the University of London, will speak on “Models of Institutionalized (Dis-)Integration? What Next for EU-US, CETA, and Brexit?”

Saint Mary’s Town Hall (Friday, 9:30am, McNally Theatre Auditorium) — you can come and complain about the university’s Institutional Plan. Or praise it. They’d probably prefer the latter. 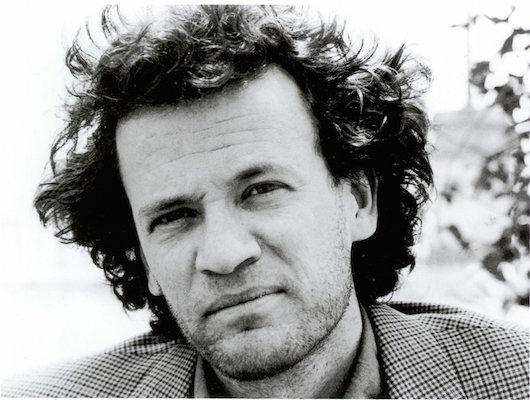 Yann Martel (Friday, 7pm, McNally Main Auditorium) — Martel, the author of The Life of Pi and The High Mountains of Portugal, will talk about “The Power of the Imagination.”

Frickin’ 10 below on March 24… The guy who replaced Peter Coade isn’t doing any better.