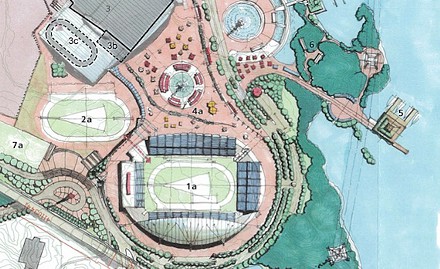 Back in 2006, Halifax had a delusionary dream of hosting the Commonwealth Games, including a design for a 50,000-seat stadium at Shannon Park, which would be converted to a 25,000-seat stadium after the Games. The entire Commonwealth Games bid fiasco cost taxpayers $8.5 million; of that, about $2.4 million went to architectural firm WHW, mostly for designing the stadium.

But, water under the bridge, whatever, let’s move on, you naysayers. So, council embarked on its next fantasy, hosting the 2015 FIFA women’s world cup of soccer. As I pointed out in February 2014, well before the latest FIFA scandals:

The idea of bidding on the FIFA event was beyond stupid. First, council had responsibly hired Grant MacDonald, director of Major Events & Community Partnerships at Trade Centre Limited, to advise it on the FIFA pursuit, and then council irresponsibly rejected MacDonald’s advice. “Based on timing constraints, Halifax [should] notify CSA that it will not continue as a Candidate Bid City,” reads MacDonald’s report to council. “Timelines do not allow for proper due diligence on venue feasibility, public input or funding partnerships.” …

Second, what rational government wants to deal with FIFA, arguably the most corrupt sports organization on the planet, and whose president tells gays to “refrain from sexual activity”? FIFA is an odious, repugnant organization, and Halifax’s political leadership was willing to jump into bed with it. This should give us pause.

But shush, you, naysayer!

[Council] would go on to form a committee to research the possibility of a stadium, and keep anyone who at all questioned a stadium off the committee. It would spend $93,000 for a stadium study, then $275,000 for a second stadium study. It would authorize $100,000 worth of staff time for chasing the stadium. And now, 15 months and nearly half a million dollars later, council voted Tuesday 22-1 that, yep, sure enough, just as MacDonald had predicted, a stadium is too iffy of a project at this time, and there’s no chance of any funding partnerships for the FIFA bid. The stadium dream is dead.

There’s a polite fiction that the stadium studies can be brushed off and used for some future stadium that will one day magically appear at Shannon Park, but at least one councillor called bullshit on that notion. “That’s just a fig leaf used to justify the expense of the studies,” said councillor Jackie Barkhouse.

Time has shown Barkhouse to be entirely correct. The stadium we spent a half a million dollars to study just a few years ago was going to be a 10-15,000 seat stadium. Tomorrow, council will consider ordering yet another study, for a 20,000-seat stadium, which will magically attract a CFL team, and bring prosperity forever, amen.

The latest staff report on the stadium is complete and utter bullshit. I don’t have time this morning to detail exactly how full of BS it is, but nearly every paragraph contains some whopper. Maybe I’ll find a couple of hours this afternoon to detail it.

But here’s my favourite part of the staff report:

Financial Implications are referenced with in a separate In Camera report dated November 2, 2015.

Understand that a stadium is the political goal of many of our elected representatives, the public opinion’s be damned. Councillor Darren Fisher, who represented the Shannon Park area, was council’s biggest stadium advocate, because…sports. No, that makes no sense, but that’s the intelligence level we’re dealing with here.

Fisher has just been elected as a Liberal MP, and I guess the idea is he, Liberal Prime Minister Justin Trudeau, and mayor and former Liberal MP Mike Savage will sit in a hot tub and smoke joints together, and the next thing you know the federal government will kick down with some serious stadium money.

Who knows? That might even happen. But even if so, the city will bear the brunt of the costs of any stadium.

Look, citizens have the right to demand whatever trinkets and baubles they want from government. Bread and circuses forever, sure. A stadium won’t cost anywhere near as much as that money pit on Argyle Street, and at least we get some gladiators beating Roughrider ass twice a year or some such. Just, well, there are better uses for the money.

Halifax council will tomorrow call a byelection to replace District 6 (Harbourview – Burnside – Dartmouth East) councillor Darren Fisher, who has moved on to the very backest of the benches in Ottawa.

So far as I’m aware, no one has announced for candidacy in the race. I predict a Trevor Zinck comeback tour.

“With the expected legalization of pot, a Nova Scotia activist is concerned about a Maritime marijuana tradition spreading — smoking marijuana cigarettes cut with tobacco,” reports Elizabeth Chiu. But that’s how we do it around here:

“Premier Stephen McNeil was right to fire Andrew Younger. He was wrong to wait until Younger’s escalating misbehavior left him no choice,” writes Stephen Kimber: 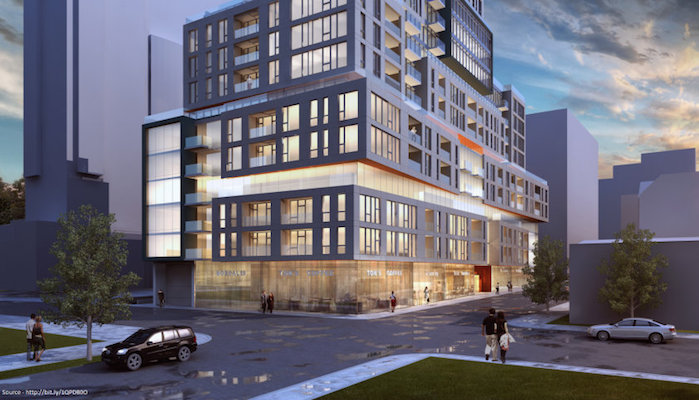 There’s a development proposal for a new building at Brenton and Clyde Streets,  pictured above, and so Stephen Archibald tromped around the area to see what’s there now. The new buildings will replace a three-storey brick apartment building — no great loss by my estimation, but Archibald finds delight even in that — and the houses below. 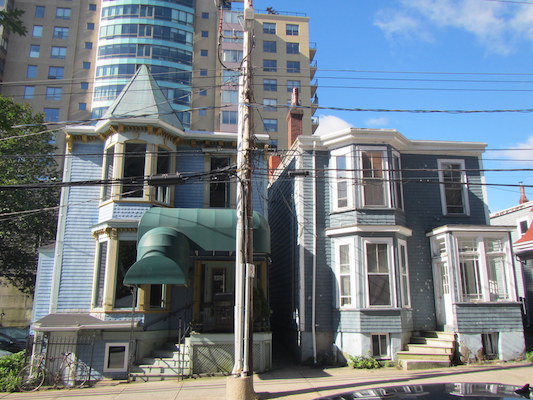 I’d probably be much more inclined to support new projects if they were at least architecturally interesting, but like most of the new stuff going up, I don’t find the proposed building particularly inspired.

I’ve mentioned before that there’s a fundamental dishonesty in architectural renderings submitted by developers. The one above shows an impossible view. The rendering also removes the interesting and detailed architecture of surrounding buildings so as to make the proposed building stand out in contrast — in reality, just the opposite will be true: the new building will pale in contrast to the existing buildings. Lastly, the developer’s rendering somehow magically whisks away the most obnoxious street feature in the neighbourhood, the overhead electric wires. For the record, there is no proposal to underground electric wires in the Brenton Street area.

Telling creative people to be Innovative is the advice equivalent of telling a musician to just write a hit song, or a gambler to simply win the lotto. Yes, it’s correct, but it’s also stupid and a little insulting.

Innovation is something Ivany really thinks we need to do. The only reason it doesn’t sound as stupid as it is is because neither the report nor action plan define, or even imagine, what innovation is. Like most political-speak, the word has no meaning beyond a shared belief that it’s a good thing… and goodness knows we all like good things.

I know of two possible definitions of innovation.

2/ Innovation def. #2 – The other way to define innovation is to oppose it to sustaining technology and ideas. Mostly in the world we make small improvements, tweaks, differences of taste, style and presentation — incrementalism. No matter what the marketing says, the new model of a car or other product is sustaining technology. Innovation radically resets customers expectations and behaviour. Innovation changes the ground rules for how competition and distribution is done. Innovation changes the economics of a business model.

The take away from either or both definitions should be clear. Innovation is VERY VERY rare. Innovation cannot be evoked. It’s similar to passion — we have the word but we have to be careful how we use it. Saying you’re passionate is like saying you’re cool — if you say it, it’s almost certain that you are not.

The good news is that lots of work as been done and it’s now pretty clear why we can’t simply conjure innovation. So maybe we could just stop with this unhelpful talk and move on to the more difficult but crucial conversation about capital and work out where our wealth is going.

Chisholm points us to this Wired.com article for more.

Just what country are we living in anyway? That question crossed my mind after hearing a CBC radio personality refer to Sophie Grégoire Trudeau as Canada’s new First Lady.

And, several weeks ago, a fellow reader suggested in a letter that the proposed Mother Canada statue should be situated in a more high-visibility location than Green Cove, such as Halifax. (After all, the Statue of Liberty was erected in New York Harbour (sic) as opposed to Maine, he pointed out.)

Can we not talk about our country, our politicians’ wives, our cities, our landmarks and our traditions without having to use these American terms, locations and occasions as a frame of reference? This isn’t the U.S.A. This is Canada, for those of you who need reminding. Let’s try to break ourselves of that habit, shall we?

On this date in 1849, the Nova Scotia Government Telegraph was completed.

The history of early telegraph lines in the Maritimes is interesting. In the 1840s, the highest interest in telegraph came from Samuel Cunard:

Halifax was Samuel Cunard’s hometown and an intermediate port of call of his steamers bound from the UK for the US. The development of the way in which messages were transferred from Halifax is of interest. At first, they were carried by stagecoach across Nova Scotia to Digby, then by steamer across the Bay of Fundy to St. John, New Brunswick, from where they could be telegraphed to Boston. By January 1850 it was possible to telegraph direct from Halifax to Portland, Maine, from where messages were taken by rail to Boston, but a year later Portland could re-telegraph messages direct to New York.

Frederick Newton Gisborne was the most prominent builder of Nova Scotian telegraph lines, and was something of a visionary, conceiving of a trans-Atlantic line:

Despite the efforts of Gisborne and his associates, the BNAETA line from Quebec had only reached Rivière-du-Loup by 1849, when Gisborne left to join the Nova Scotia Telegraph Co. at Halifax to superintend the Nova Scotia government telegraph lines. These were the only lines then operating in the province. He immediately began to experiment with methods of laying telegraph cables underwater.

In 1851 he was investigating the connection with Newfoundland and a transatlantic cable, and in 1852 resigned his Nova Scotia post to concentrate on this enterprise. One possible first stage he apparently visualised was to connect Cape Ray, Newfoundland with Cape North, Nova Scotia ; another was with Prince Edward Island and from there to New Brunswick.

That year, Gisborne contacted Joseph Howe, the provincial secretary and a member of the Commisssion established to oversee the operations of the province’s telegraph system, with a plan for submarine telegraphic communication between Newfoundland and the North American continent at Halifax . The Commission backed Gisborne who was despatched to St. John’s to secure support there for the project.

While in Newfoundland Gisborne successfully contracted for a land-line from St.John’s to Harbour Grace and Carbonear. Gisborne returned to Halifax with the astonishing additional proposal to connect Newfoundland with Ireland by a transatlantic cable, an idea that was rejected out of hand as impossible and Gisborne was dissuaded by the Commission to make any attempts to seek capital for it.

Tuna (11:30am, Biology Lounge, 5th Floor, Life Sciences Centre) — Laurenne Schiller, from the Vancouver Aquarium, will speak on “Shortcomings in the international management of tuna stocks and the influence of private eco-labels on public governance.” 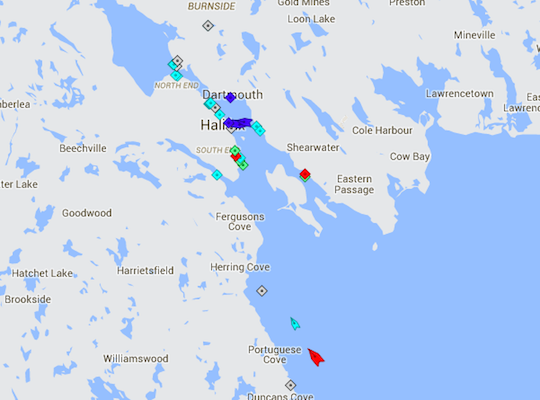