Earlier this week, Canoe Kayak Canada announced that it had hired Andreas Dittmer as its new Men’s Canoe Coach:

Andreas Dittmer marked the history of sprint canoeing and inspired thousands of young athletes around the world. The German Olympian will take charge of the Canadian men’s sprint canoe team.

During his career, Dittmer dominated sprint canoeing by winning five medals at the Olympic Games, including 3 golds in C-2 and C-1 1000 meters. He is also 8 times World Champion and has won a total of 22 medals at the World Championship between 1991 and 2004.

“Andreas is the final piece in solidifying a World Class coaching team,” said Barton. “He brings with him extensive Olympic experience. He knows what it takes to win and I am confident that he will lead our Men’s Canoe Program back into contention for the podium in Tokyo and Paris.”

Canadian Olympic canoeing didn’t win any medals in Rio, resulting in a cutback in federal funding, reported Shaina Luck for the CBC. Canoeing is just like capitalism, I guess: if your corner canoe racing store can’t compete with the corner canoe racing store down the street, you’ve either got to close your doors and find another line of work, or you bring in a new boss to whip the staff in line.

Which brings us to Dittmer.

Dittmer has long portrayed himself in photos as a sort of uber Native American, of indistinct national origins but complete with headdress and other feather adornments, and wearing stylized native garb and war paint. I’ve taken these images from archived and cached versions of his website: 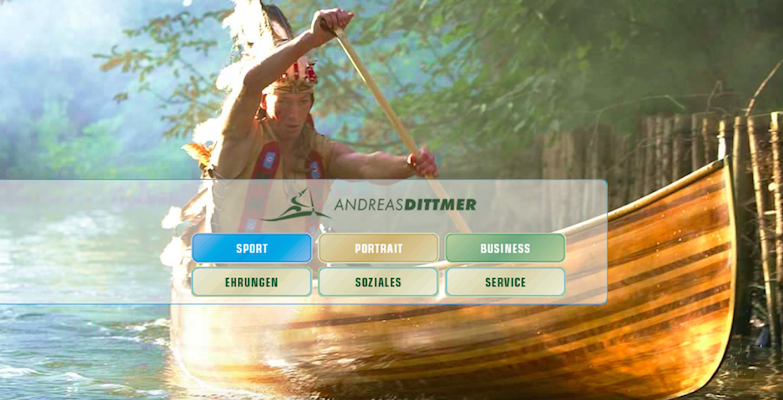 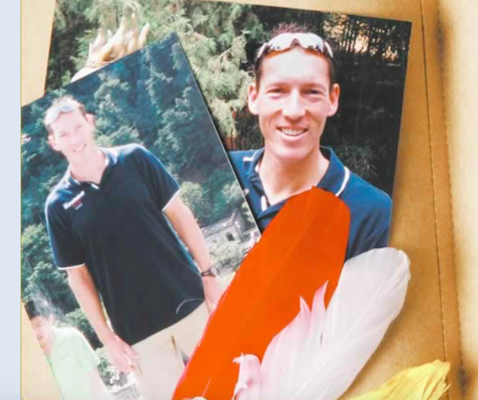 The German fascination with the perceived “wilds” of North America dates to Karl May’s “Winnetou” novels of the 1890s, noted Rivka Galchen in a 2012 New Yorker article.

I understand it: the German landscape is super-regulated. Walking around the German countryside, I was struck how every acre was planned, its use and purpose and life dictated to the nth degree. Town limits were prescribed to exacting limits, separated from each other by postage stamp farms that seemed to claim to an ancient heritage of place. Even the forests were regimented: each patch of forest contained trees of exactly the same species and exactly the same age, followed by another patch of another age — the result of long range planning that has been in place for 200 years. I never saw a truly wild forest in Germany.

So the unregulated mess that is the landscape of North America has immense appeal to Germans. At its best, that appeal is expressed in a profound love of the wilderness. I think of the van loads of Germans driving around the deserts of the southwest U.S., hiking in Joshua Tree or down to the bottom of the Grand Canyon. Pleasant, happy people, truly loving the experience. When my German friends came to visit, they drove around Atlantic Canada camping out in the woods; driving along the Cabot Trail, they saw a pod of whales, which was nearly a religious experience for them. Or the many Germans who have moved to Nova Scotia, building or buying homes along the coast. We have much to learn from these Germans in terms of appreciating the natural world that we too often overlook or take for granted.

But there can be a dark side to the German love for the “wild west”: it can stereotype and demean Indigenous peoples, seeing them as two-dimensional parables rather than actual living people with their own complexities, histories, and lived lives.

The canoe was, of course, an invention of Indigenous people. So images of non-Indigenous people capitalizing on Indigenous stereotypes strike an ugly chord when Canada is dealing (or not) with reconciliation. The point of Dittmer’s photos was self-promotion and to sell photos; that is to say, the point was cultural appropriation.

Since he was hired at Canoe Kayak Canada, the images of Dittmer in native dress, war paint, and headdress have been scrubbed from his website and, seemingly — this must have required great effort and cost — from Google’s Image collection as well.

Halifax Regional Police is requesting the public’s assistance to identify the driver involved in a vehicle pedestrian collision that occurred in Halifax last night.

The driver stopped and asked the pedestrian if he was alright, however, at the time the man didn’t realize he was injured. The pedestrian had sustained non-life threatening injuries as a result of the collision and was transported to the hospital by EHS. Shortly after the collision he reported it to police.

“As reported earlier 2016 census data recently released by Statistics Canada showed poverty to be more rampant in Nova Scotia than any other province, with 17.2 per cent of its population (or 155,000 persons) considered low income,” reports Robert Devet:

Bad as these numbers may be, they dwindle when compared to  poverty rates among African Nova Scotians, who face poverty rates of 32.1 per cent, twice the number experienced by whites. 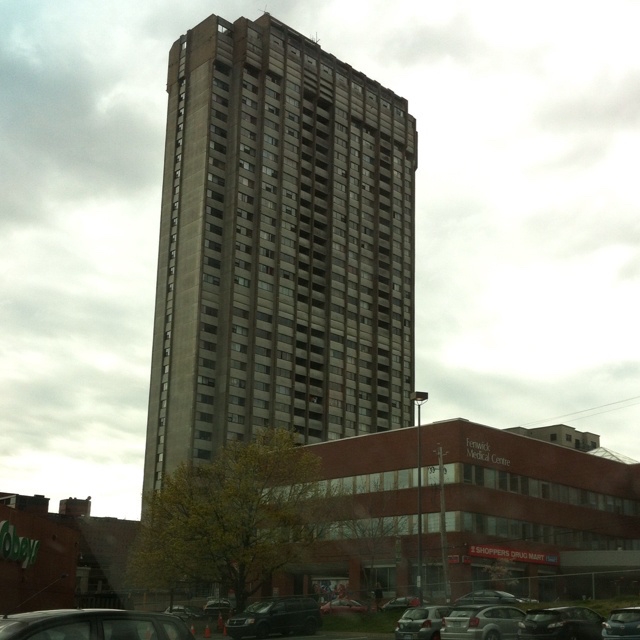 Fenwick Tower caught on fire the other day. Thankfully, nobody was injured, but many residents lost power for days and at least one — Hassan Haider — lost everything he owns in the fire, reports Global.

The damage will cost millions of dollars to repair, and Fenwick owner Joe Metlege doesn’t yet know if insurance will cover it.

You’ll recall that after a lengthy court battle, Metlege bought the former St. Pat’s school site on Maitland Street. I wrote this about him last year:

I think Joe Metlege is one of the better developers in the region. I say that in part because rather than quickly flipping buildings (and their structural liability) as condos, Metlege holds ownership and rents them as apartments — that suggests a long-term commitment to the buildings, and so they are built to a better standard.

But there are two issues at the St. Pat’s – Alexandra site. The first is the increasing gentrification of the area. If managed carefully (a big if), gentrification can bring some positive results for existing residents, but on balance right now in the north end not many of those benefits are being realized. As just one example, despite some valiant efforts by Michelle Strum, the new restaurant scene is not providing many employment opportunities for young people from the neighbourhood.

The second issue is that no matter how well he constructs and manages his buildings, Metlege seems to be in a holding pattern. The promised rebuild and expansion of Fenwick Tower in the south end has been drastically scaled back and is moving slowly.

And Metlege acquired the Trinity Anglican Church property on Cogswell Street in 2008 with the intent to build a 19-storey building; eight years later the land is being used as a parking lot.

It cost the city hundreds of thousands of dollars to maintain the empty St. Pat’s building, so I’m guessing Metlege will soon tear it down. As with the church property on Cogswell, will the school property sit empty for the next decade?

It’s been a year since I wrote that. The school hasn’t yet been torn down, the Cogswell property remains idle, and the scaled-down Fenwick rebuild is taking forever and is evidently problem-plagued.

I’m getting the sense Metlege is in over his head. The city should demand a tighter timeline on these projects. There’s no reason we should stand for essentially abandoned properties.

Halifax District RCMP is investigating a motor vehicle collision that took place on Highway 103 in Upper Tantallon early this morning.

Just before 12:30 a.m., RCMP responded to a complaint of a 2004 Jeep TJ lying on it’s roof in the ditch along the highway. The driver, a 22-year-old man from Timberlea, and a 2-year-old girl, were not injured.

The driver is facing charges for Impaired Operation and Operating a Motor Vehicle over the Legal Limit. As well, a referral has been made to Community Services for driving a motor vehicle while impaired and having a child present.

The man will appear in Provincial Court at a later date to answer to these charges.

The province this morning issued a tender for body bags:

The Nova Scotia Medical Examiner Service (NSMES) division of the DOJ is responsible for determining the cause and manner of death in circumstances that are defined in the Fatality Investigations Act. NSMES investigates deaths of persons who die from criminal violence, by accident, by suicide, suddenly when in apparent good health, when unattended by a physician, in a correctional facility, or in any suspicious or unusual manner. NSMES completes approximately 800 autopsies per year. 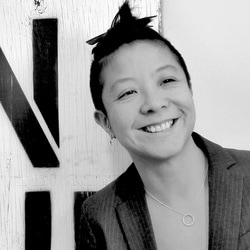 The Futures of Migration (Friday, 2:30pm, Room 1116, Marion McCain Building) — Thomas Faist from Bielefeld University, Germany, will speak on “The futures of Immigration: A New Normalcy?”

Russian Ark (Thursday, 7pm, Dalhousie Art Gallery) — a screening of Alexander Sokurov’s 2002 film. A bravura single-shot tour of the great Hermitage Museum in St. Petersburg, Russian Ark examines the art, culture, and history of Russia after the collapse of the Soviet Union through the glass of the Tsarist Empire which preceded it.

The second of three nights of screenings of Neal Livingston’s films.

John Dunsworth – The Candidate – Neal Livingston’s 1989 film in which the late John Dunsworth runs for election in 1988 for the Nova Scotia NDP.

Examineradio will be published today.