You are here: Home / Commentary / Canada voted, but your vote may not count ⁠— again 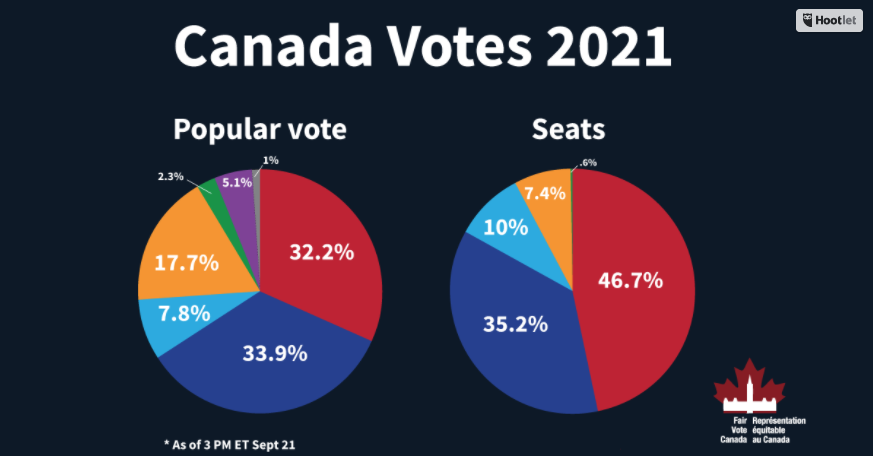 So, one more federal election, one more failure to get the results we voted for, one more missed opportunity to change our archaic and unfair electoral system.

You may remember the last real opportunity.

It was 2015, and the Liberals were in deep electoral doo doo. The party’s already shaky support in public opinion polls was cratering, thanks in part to their opposition to the Conservative government’s anti-terrorism bill.

But suddenly, out of nowhere, our then prime-ministerial-wannabe (who is now our third-term prime minister), pulled a Willy Wonka Golden Ticket out of his back pocket.

His magic words? “2015 will be the last federal election conducted under the first-past-the-post voting system.”

Justin Trudeau declared it thus. And declared it. Over and over. According to the opposition, he said it at least 1,800 times in the leadup to the Oct. 19, 2015, vote.

It worked. And no wonder.

Canadians were clearly looking for a bigger something new and different that year. Although the Liberals weren’t the only party promoting electoral reform in 2015 — “63 per cent of voters cast ballots for parties that said they would make every vote count” noted Policy Options in 2017 — Trudeau’s promise captured the popular imagination. As Trudeau himself noted in a slightly different context: “Because it’s 2015.”

The idea wasn’t even all that new. There had already been more than a dozen “previous studies and consultations that all recommended adding proportionality to the voting system.”

Using Canada’s skewed political math, 39% of voter support often equaled more than 50% of seats in the House of Commons. In the 70 years since World War II, in fact, there had been 16 “majority” governments in Canada, only four of which had earned more than 50% support among voters.

In 2015, of course, Trudeau’s Liberals themselves would go on to win just 39.5% of the popular vote but 54% of seats. As Kelly Carmichael, the then-executive director of Fair Vote Canada, put it starkly in Policy Options in 2017, “a mere 4.6 million Canadians [of 17.4 million voters out of a national population of nearly 36 million] voted for the 184 Liberal MPs who currently hold power.”

And yet… there’s the sandpaper rub in the snake-oil Liberal reform promise.

The Liberals won that year — as Liberals often do — precisely because we have a first-past-the-post electoral system.

Which led — as it so often does with eyes-always-on-the-prize Liberals — to a post-election, post-haste Liberal retreat.

The Liberals did appoint an ass-covering all-party Special Committee on Electoral Reform. It spent $600,000 holding hearings in every province and territory across the country, occupied 217 hours in committee meetings and compiled a 333-page report “recommending major changes to the country’s voting system,” including a national referendum on switching to some form of proportional representation. Some percentages worth noting from that process:

Trudeau claimed there was no consensus — see above — and therefore he wouldn’t go forward with any sort of electoral reform at all.

And he hasn’t. In our most recent election campaign — the second since his original promise — Trudeau insisted, for photo-op purposes, that he remained open to getting rid of the first-past-the-post system, but it was no longer a priority since there was “no consensus.”

“If ever there is more of a consensus,” he declared two days before Canadians went to the polls, “it could be interesting to follow up on, and I’d be open to that.”

How open? Consider the results of the 2021 election. This time the Liberals actually lost even the popular vote. They got 33% compared to the Tories’ 34%  but will get to form the government because they spread their vote more “efficiently” over the country’s 338 ridings. The Tories racked up huge majorities in a limited number of western ridings, winning just 119 seats, while the Liberals managed to snaggle just enough votes to win in more different ridings, winning 158 seats.

How likely do you think it will be that the Liberals bring in electoral reform in this term? Your first two guesses don’t count.

Wait a minute! If there was simple proportional representation, that means the right-wing, anti-vaxx fringe PPC could end up with 20 seats! Who wants that?

Not me, but I’d rather have those marginal views represented in the House of Commons where they can be countered than in the streets where their fringe frustrations can grow unchecked. 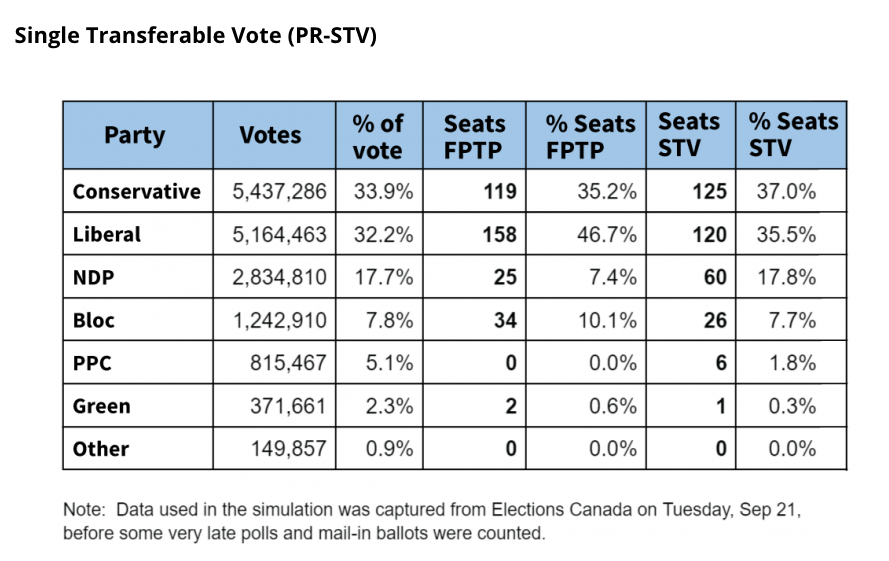 In the second scenario, the Liberals would still win narrowly. In the first, the Tories would win, also narrowly. In either case, they would need the support — as the Liberals do now — of some combination of smaller parties to effectively govern.

The big difference — and it is big — is that all the parties’ seats in parliament would more closely reflect our support for them.

In a democracy, can that be a bad thing?