NDP leader Gary Burrill is promising an NDP government would do more to tackle climate change than the Liberals have done to date or have committed to do in the future.

Burrill made the statement at a ballfield surrounded by three Dartmouth High students who told reporters they are worried politicians aren’t doing enough to address climate change.

“I first got involved with the NDP in 2019 because of this exact issue,” said 16-year-old Kai Hollett, “because of climate change and what I saw as government inaction at both the federal and also the provincial level, where nothing was being done to combat this crisis and actually protect the future for myself and my generation. I absolutely believe the NDP is the party pushing this issue to the forefront.” 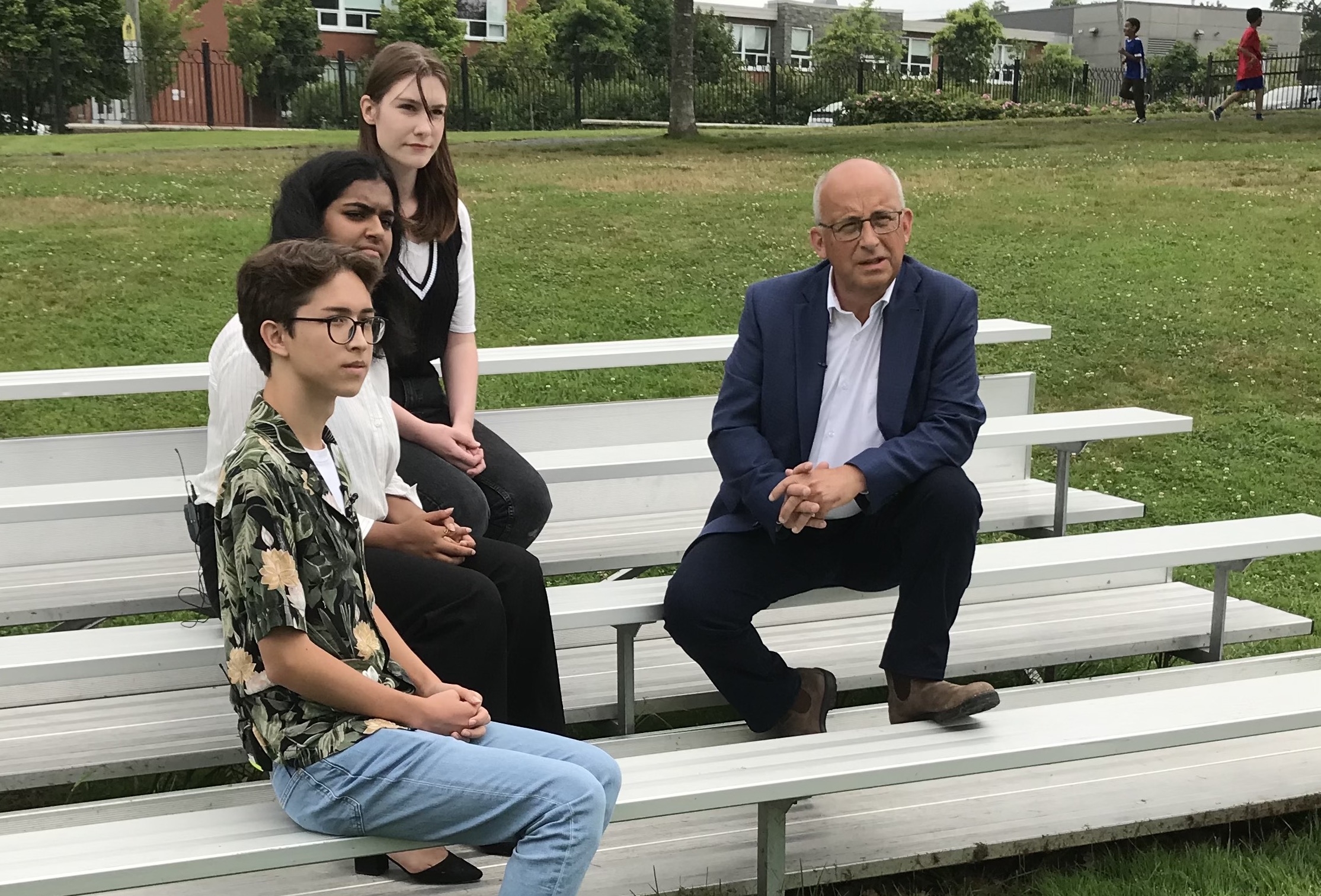 Burrill made a commitment to Kai Hollett and others that if elected an NDP government would set a target to reduce Greenhouse Gas (GHG) emissions to 50% below 1990 levels by 2030. That’s the bar scientists have said must be met if the planet is to hold global warming to 1.5 degrees Celsius.

“The Liberals have gutted key environmental laws, created weak emission targets, and delayed bringing forward a real plan to fight climate change,” said Burrill. “The climate emergency has to be more than a Liberal talking point; real action is required.”

The Liberals have proposed legislation that would set a target of reducing GHG emissions to 53% below 2005 levels. If the NDP were to use the same reference year as the Liberals, Burrill claimed his party would reduce GHG emissions to 58% below 2005 levels. That five percentage point difference is “significant” and would result in taking an additional 240,000 cars off the road compared with the Liberal target, he said.

The Liberals were the first government in the country to commit to making Nova Scotia a “net-zero” emissions province by 2050.

The NDP would also close down coal-fired electricity plants by 2030 (as Liberal leader Iain Rankin promised back in February) and replace coal and oil with renewable sources such as wind and hydro. Ditto for the PCs.

Burrill said an NDP government would commit to doing a review or “life-cycle analysis” of burning biomass to determine if it meets the definition of a “renewable” fuel. He said the cost of moving off coal and replacing fossil fuels with renewable sources of energy is part of the party’s Green Jobs strategy, which will be costed and unveiled soon along with the rest of the platform.

The NDP aims to generate 90% of the province’s electricity from renewable sources by 2030. Nova Scotia hovers around 30% today.

Both the Liberals and Progressive Conservatives have committed to hard targets of 80% renewables. The PC platform has not set a target for reducing GHG emissions. Instead it states a PC government would introduce a new “Enviro-goals and Climate Change Reduction Act that would identify and showcase Nova scotia as a world leader in adopting green energy measures and following climate-friendly sustainable development.” That’s a mouthful.

“Today I’m announcing our health care platform: $131.6 million for additional programs and initiatives that add even more value to the programs my government has started and undertaken since February,” said Liberal leader Iain Rankin.

Rankin made the announcement on the Halifax Common surrounded by a dozen Liberal candidates running in Metro. 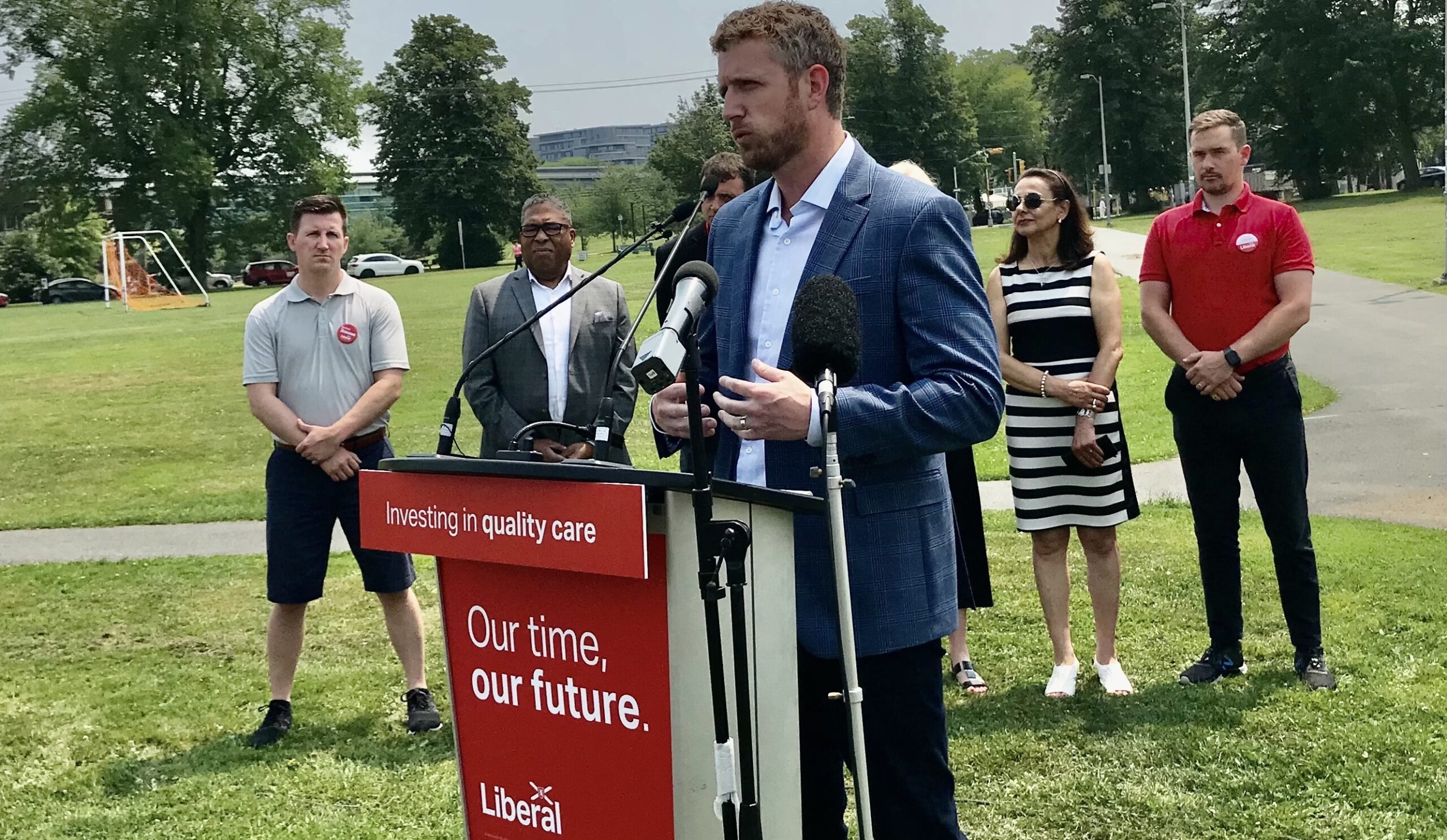 This amount is on top of $400 million in new spending for health care announced in the provincial budget last spring. That budget included record amounts for mental health (now at about 7% of the total health budget), long-term care, and home care.

Here are some of the highlights from yesterday’s announcement, starting with efforts to do more about the growing waitlist for family doctors and overcrowded Emergency departments, something the PCs have criticized as a major weakness of the Rankin government. Rankin said that a re-elected Liberal government will:

• Add $2.5 million a year to double the amount for physician recruitment and create an office separate from NS Health within two months

• Add $6.0 million a year to expand virtual care for people on the waiting list for a family doctor in all four health zones (A pilot project that began in May for people in the north and western zones has signed up close to 30,000 patients for online visits)

• $1.5 million a year for the nurse practitioner (NP) Incentive program

• $1.75 million a year to expand midwifery service to the valley and Cape Breton

It’s unclear where or how the Liberals intend to find the additional health care professionals needed to expand mental health and virtual care in the absence of living breathing doctors and nurse practitioners. Rankin said our population is growing and Nova Scotia is in good position to attract new medical professionals because this is a good place to live.

Meanwhile, the Liberals have in the recent past committed more than $2 billion to build new hospitals to replace the crumbling Victoria General, expand emergency departments at the IWK Children’s and South Shore hospitals, create dialysis units at several locations, and replace the hospital in Pugwash with a new one. These capital expenditures will be spread over many years. In fact, although the ground was broken last August to begin construction of a new outpatient clinic at Bayers Lake to replace some services housed at the VG and Infirmary, the target date for opening isn’t until 2023-2024.

Nominations for political candidates who want to participate in this election will close at 2pm today.

The latest Elections Nova Scotia list of candidates shows the Liberal party will not field a candidate in the riding of Dartmouth South. The party’s previous candidate, barber Robyn Ingraham, withdrew on the first day of the campaign, as a result  of a dispute with senior members of the Liberal party over some boudoir photos that displayed her tattoos.

Liberal leader Iain Rankin told reporters attending a 1pm news conference yesterday the party would be nominating a candidate later that afternoon to replace Ingraham. But the paperwork has yet to be filed; the deadline is 2pm today.

Dartmouth South was won last election by the NDP’s Claudia Chender, who appears to be in a strong position to repeat. The PCs are running Chris Curtis. The Green Party has nominated  Skylar Martini.

Meanwhile, the Progressive Conservatives have not abandoned Cumberland North.

Nomination papers have been filed for Amherst native David Wightman, a local radio announcer, to carry the PC banner. The PCs lost their previous candidate after Elizabeth Smith-McCrossin was booted out of the PC caucus for protesting against COVID-19 restrictions that became a factor in the closure of the border between Nova Scotia and New Brunswick.

Smith-McCrossin is running as an Independent. The Liberals have resurrected former federal Member of Parliament Bill Casey to run in Cumberland North. Lauren Skabar is the NDP candidate.