Back in 2008, Nova Scotia Business, Inc. offered up to $1.4 million in payroll rebates if the ICT Group group opened a call centre in Sydney. The money was contingent on the company hiring 200 people over the next five years. That deal expired last year. Yesterday, the company, which has rebranded itself Sykes, Inc., closed its Sydney location.

Subsidies for call centres have always struck me as a sucker’s game. There’s always some other jurisdiction that can offer an even bigger subsidy, with even lower payroll costs, so invariably when the deal is up, the companies start shopping around for the next deal. In fact, something like half the English-language call centre jobs on Earth—including many that used to be in Nova Scotia—are now in the low-wage paradise of The Philippines, with most of the rest in India.

But we shouldn’t discount the importance of even a minimum wage call centre job in a community where jobs are scarce. “There was a young guy I was talking to,” one laid-off employee told the Cape Breton Post. “He’s 22 and has been working there since he was 18. That’s his job, right. It’s all he knows.”

It’s a real quandary figuring out how to bring employment to places that need it a lot. But there’s got to be a better strategy than this.

Marilla Stephenson spent her years as a Chronicle Herald columnist writing non-critical and unthinking pieces blindly parroting the Chamber of Commerce view, and for that she is now being richly rewarded. 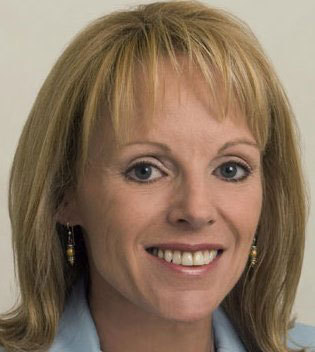 Last week Stephenson announced she was leaving the Chronicle, but didn’t say why. I’m told, however, that the paper offered her a generous retirement package. All well and good.

But just after the 5pm reporter filing deadlines yesterday, the provincial Office of Planning and Priorities announced it has hired Stephenson to work with oneNS Coalition, which is supposedly implementing the goals of the Ivany Report, whatever those are. “The oneNS Coalition is a 15-member volunteer committee with representation from the private, public, post-secondary, and non-profit sectors,” explains the press release, but we can’t expect Stephenson to volunteer, can we? Of course not. She’s working on an 18-month personal services contract paid for by the province.

Stephenson, said deputy minister Bernie Miller, “holds extensive knowledge about the issues affecting our province, and understands better than most the importance of working collaboratively to address them.” In short, we can expect nothing but businessbabble coming from oneNS. Our economy is truly doomed.

Besides the cozy “you scratch our back and we’ll reward you later” relationship between business interests, government, and business columnists (I can’t wait to see what plum Roger Taylor gets after he leaves the Herald), I worry what these sorts of arrangements do to journalism in the long run. It’s the wrong message to be sending young reporters.

Recent arsons in North Dartmouth targeted homes owned by the family of murder victim Daniel Pellerin, the Chronicle Herald reports. Pellerin was the man stabbed to death in the parking lot of Farrell Hall in August. Twenty-three-year-old Trevor Kyle Hannan and a 15-year-old boy were arrested for the crime.

Tuesday, Hannan appeared in court, and family members of both Hannan and Pellerin clashed in the gallery:

“Keep your head up, Trevor,” one of Hannan’s supporters, a woman, said to him as he was led away by sheriff’s deputies.

That prompted a woman from the Pellerin group to call her a “stupid bitch,” and more angry words were exchanged outside the courtroom.

5. Crime in the valley

Someone poached an endangered Mainland moose, the Canadian Post reports. This particular four-year-old moose was the same animal that was lost on a St. Croix farm last month; it was tranquillized and then released in the Pockwock wilderness that surrounds the main reservoir for Halifax’s water supply. It then wandered to nearby Mount Uniacke where someone killed it and took the meat, leaving the hide and head on the side of the road. “The Natural Resources Department says the moose meat contains residual tranquilizer drugs and is not considered safe to eat,” says CP. Hunting moose on mainland Nova Scotia has been illegal for 30 years. 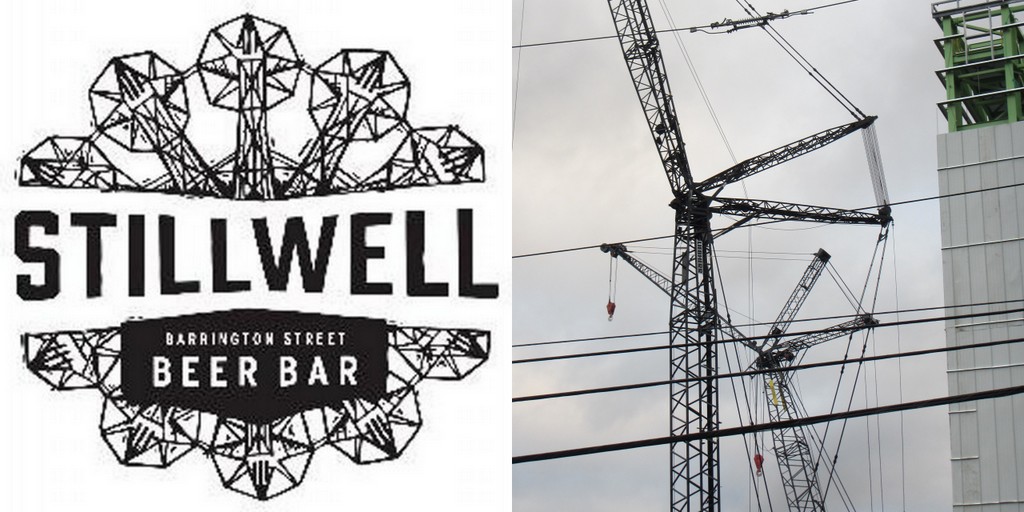 Stephen Archibald took some pictures of the new construction at Irving Shipyard. “I’m sure the real photographers are recording the theatre of the construction process,” he tells us self-depricatingly. But of course Archibald is a real photographer, and has an incredibly perceptive eye. For example, he looked at the cranes at the shipyard and “they  immediately reminded me of a woozy version of the Bar Stillwell logo. I imagined a hipster engineer spending the afternoon sampling brews and designing trusses.”

Dale Smith recently paddled the canoe loop in the proposed regional wilderness park. I’ve taken the exact same route with Chris Miller, of the Canadian Parks and Wilderness Society. Smith, like me, recognizes the incredible value of the wilderness, and worries that efforts to protect it are being stymied. “It is indeed time to be bold,” he says.

Paul Schneidereit makes seven or eight logical fallacies in a short piece trying, but failing, to fault Maude Barlow for her concerns about potential tanker accidents. Foremost is an appeal to improbability: Like airplane crashes, oil tanker accidents rarely happen, therefore we shouldn’t worry about them. But, in fact, if you’re actually on that flaming airliner making a beeline for the mountain top, you’ll probably worry, not that it will do you any good. The larger point is, sure, tanker disasters are rare, but it only takes one to muck up your environment for a very long time. Deepwater oil platform disasters are rare also, but, four years after the Deepwater Horizon accident, the Gulf of Mexico is still an environmental disaster zone.

Roger Taylor is finally getting around to realizing something I’ve been writing about for years: Halifax is simply not well-placed geographically to be a major port. In fact, exactly as the geography dictates, port traffic in Halifax is down while ports along the US east coast are seeing increasing traffic. Taylor quotes Fritz King, the managing director for Atlantic Container Line, as follows:

Halifax is an incremental port of call, which basically means the ships calling here are also going down, usually, the East Coast of the U.S.A. to make other calls. It also makes it a competitive environment, and cargo goes where economy and volume dictate. We don’t have, in Atlantic Canada, a big indigenous market.

Here’s how I put it in July:

There’s the notion that because Nova Scotia is the part of mainland North America closest to Europe, it is perfectly placed to become a mega-transhipment point. But as I said before, this is 180 degrees wrong. Shippers don’t want the closest port to Europe; they want the port farthest from Europe, or at least the one closest to the ultimate destination of their goods.

Anyone who studies shipping understands this reality, but that didn’t stop the mucky mucks from fleecing us for hundreds of millions of dollars to promote the Atlantic Gateway nonsense. 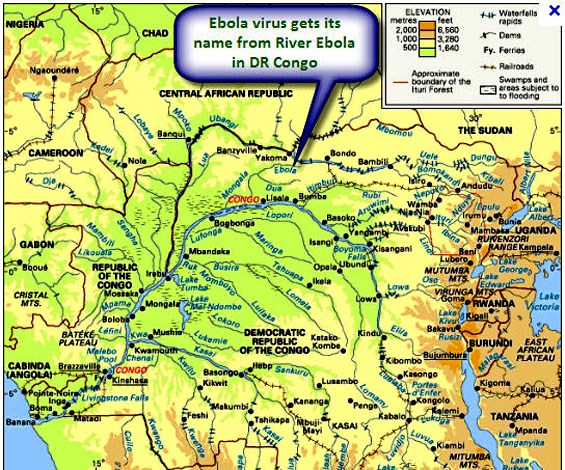 A map of the Ebola River, for which the disease is named, even though it was the wrong river.

One of the many RSS feeds I subscribe to is for Murray’s Review of Medical Journalism, which ranges all over the place but is always a good read. Recently, Terry Murray discussed the etymology of Ebola, which was named by Peter Piot, a doctor who discovered the virus in 1976, when a Belgian nun contracted it in Yambuku, a remote village in what was then the Belgian Congo:

“We definitely didn’t want to name the new pathogen ‘Yambuku virus,’ because that would have stigmatized the place forever,” Dr. Piot is quoted as saying. “There was a map hanging on the wall and our American team leader suggested looking for the nearest river and giving the virus its name. It was the Ebola River. So by around 3 or 4 in the morning we had found a name.”

However, the scientists had been working late into the night, with liquid refreshments, and had failed to notice that the map was small and imprecise and in fact the nearest river was not the Ebola. 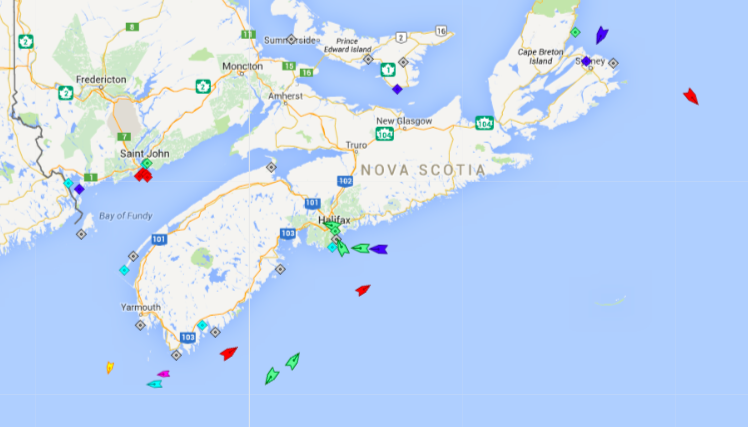 The seas around Nova Scotia, 5:45am Wednesday. Map: marinetraffic.com

ZIM Tarragona to New York
Legend of the Seas to Saint-Pierre
Charles Dickens to Kingston, Jamaica

[insert your own navel-gazing here]