1. Bullshitter of the Summer: Randy Delorey 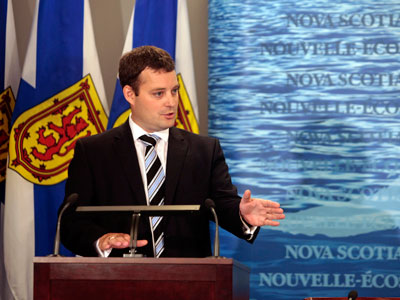 Finance Minister Randy Delorey met with union leaders yesterday to present to them what he characterized as a “new approach” to labour negotiations.

As I’ve previously written, it has been rumoured that the Liberal government was going to try to impose a three-year wage freeze on union members. But it’s even worse than that: Delorey has proposed a five-year wage freeze.

In real terms, if inflation runs at two per cent a year, a five-year wage freeze amounts to a 10.5 per cent pay cut by the end of the five years.

Delorey presented the wage freeze via a PowerPoint presentation. You can see the entire presentation here.

But what about the taxpayer? In some theoretical world, reducing public employees’  pay means cutting government costs, which translates into lower tax bills for the average person, so everyone in Nova Scotia will have more after-tax money in pocket, which they will then spend on goods and services, which results in even more economic activity, and so more people hired to provide those goods and services, than if the public employees were getting the money.

That’s a perfectly good argument. Welcome to our shores, stranger. Perhaps you’d also like to buy the Macdonald Bridge from me, for a mere $200. No, no, the brown bills, not the green ones.

In reality, cutting public employee pay does not result in reduced taxes. Well, sure, the Liberals want to reduce taxes — just not for you. Laurel Broten’s tax recommendation was to reduce taxes on “risk-takers, dreamers, doers, and builders.” Who are they? Well, it ain’t you. It’s people in the self-congratulatory circle jerk of big money, who aren’t spending their riches at the local corner store but are rather parking their dough in hedge funds managed in the tax-avoidance Cayman Islands and finding other opportunities for rent-seeking. Under Broten’s proposal, normal, everyday people will see their taxes go up, not down, through increased sales taxes and the like.

Broten’s proposals were shelved because they were too transparently honest. But her proposals fit well within the neoliberal policy aims of the Liberal government. Unless there is continued political resistance, we’ll see each of her proposals implemented over time.

But, again, the premise is bullshit. As I’ve written before:

First of all, “dreamers” and rich people don’t “create jobs.” You know who creates jobs? Customers. Regular people with everyday jobs who have cash to spend. It’s that cash that “risk-takers” figure out how to appeal to and “build” their fortunes on. That’s why we need good-paying, union-protected jobs for as many workers as possible: because those workers are the bedrock of the economy. Without them, our economy is a race to the bottom, as we rely increasingly on ever-lower paying jobs in whatever slave-labour hellhole we can find them in, and loot the collective social wealth that took decades and centuries to accumulate.

The aim to cut public employee wages is part of a larger project to shift wealth into the hands of a tinier and tinier group of people. Understand that and you can understand pretty much everything about our politics today. It’s the politics of looting, as the one per cent steal everything that isn’t tied down, and untie everything else.

As an aside, imagine if the politicians of the past had the ideology of our present political class. Imagine them saying government is bad, public employees are the root of all evil, we can’t possibly afford any increases in government expenditures, and so forth. We’d have no Medicare. We’d have no highways. We’d have none of the public works that provide the foundation for our economy, which is still one of the wealthiest the planet has ever seen — much wealthier today than when our country was being built. They could find the money for important public projects then, and we can find the money for important public projects now.

Second, the particulars of Delorey’s presentation pretty much are bullshit defined. He has a “desire to move towards collaboration,” and expresses that collaborative spirit by dictating a wage freeze before negotiations even begin.

Recognition that the members represented by labour leaders are our employees who provide public services, but also citizens who consume those same services and taxpayers who pay for them – representing the whole person.

See, public employees, Delory cares about your whole person, your entire being, not like those nasty union leaders who only care about your paycheque. Delorey is thinking about your chakras, your energy flow, the balance of your mind and spirit. He’s like the Dalai Lama, sort of, if the Dalai Lama wanted to cut your pay.

Delorey’s specific proposal is to freeze the total amount spent on employee compensation for each of the next five years. But, he says, that doesn’t mean there can’t be pay increases:

And who will find those cost reductions, cost avoidances, service redesigns and efficiencies? The unions. This is an utter abandonment of managerial responsibility — the Liberals are throwing up their hands and saying, “fuck it, we don’t know how to save money, it’s up to you guys.” Moreover, it’s a bald attempt to destroy union solidarity, to pit public employees against one another. Workers over in Department A can get raises, but only if they figure out a way to get workers over in Department B fired.

Delorey could have proposed that union wages be capped in the sense that total compensation would not rise faster than inflation. That too would be problematic (any individual person’s wages should increase more than inflation as they move up the job market, acquiring more skills and experience), but it would at least make sense to the broad public. But no, rather try to find a sensible common ground, he’s declared war on labour in Nova Scotia, and he wrapped his justifications for war in one big stinking pile of bullshit.

Don’t expect the unions to take this lying down. This province is about to explode. 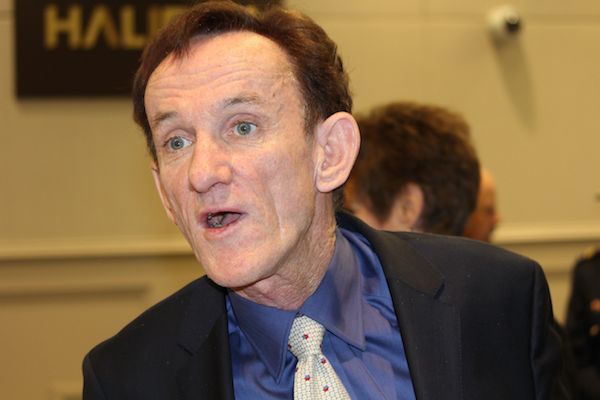 Impaired driving charges against Halifax councillor Reg Rankin have been dropped, reports the CBC. In March, 2014, in a snowstorm, Rankin drove his car into his porch. RCMP officers arrived at the scene and charged Rankin with impaired driving and failing a breathalyzer test.

But no worries, the charges have been dropped because, well, because he’s not some stupid kid or a brown person or Joe Sixpack, and no we don’t have two systems of justice, one for connected people and one for peons like you SHUT UP SHUT UP SHUT UP.

I kid. Of course the true facts of the situation, as carefully elicited by legal counsel and wisely considered by a learned officer of the court, dictated that justice is best served by ending the matter and moving on.

But don’t try this at your home, kiddies.

Rankin has been fortunate, and I mean this, to be in a public position that has allowed him to take not one, but two, paid leaves of absence to attend to personal medical issues after being involved in alcohol-related incidents. Such benefits should be available to everyone. 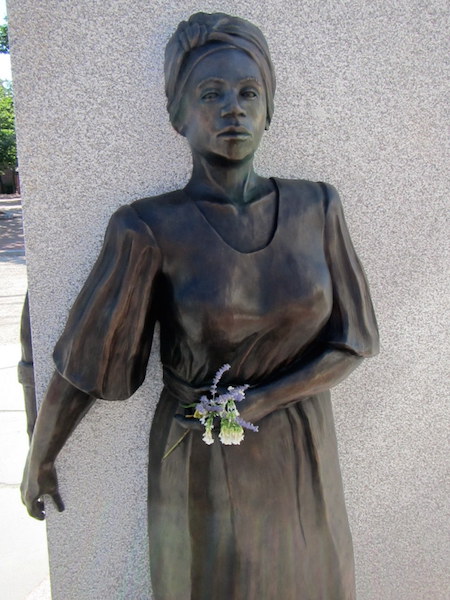 Stephen Archibald recently stopped by Portsmouth, New Hampshire and, as is his wont, explored the town. Besides all the architectural wonders, Archibald discovered the African Burying Ground Memorial.:

Seems that a burying ground for early black (enslaved) residents of Portsmouth had been “lost” and eventually paved over. It was rediscovered a few year ago and the community worked to create a fitting memorial. To us it felt like a great success.

At the upper entrance to the site a male figure stands pressed against a granite slab.

Somehow I knew to look behind the slab and discovered a female figure. Flowers had be placed in her hand.

Then I realized the figures were reaching for each other, but there was a poignant and  painful separation.

When I checked the website for the Portsmouth African Burying Ground it turns out that the female figure represents Mother Africa! Mother Canada could learn a lot from her. For example, the impact of facing the gaze of a life sized sculpture, and the power of a nuanced gesture.

Be sure to check out all of Archibald’s photos.

2.Cranky letter of the day

A recent tourist to this island embarrassed me when he correctly said, “It’s a beautiful island but everywhere I went this week I saw garbage on the side of the roads, mostly coffee cups.”

We live on an island where there are two different groups of residents. One group will go out of their way to put trash in the can and the other group never puts a thing in the trash can. It is sad to acknowledge, but it’s very true.

I have had to take an empty garbage bag and pick up along the side of the road in front of my house often and I have become desensitized to the trash I see daily. It took a visitor to make it clear to me again on how embarrassing this is to our island. What is wrong with Cape Bretoners when we allow this to go uncontested?  What kind of people live here that think it’s OK to just throw garbage out the window of their automobiles and let it blow down the street?

The government road signs that state there is a $250 fine for littering is a joke because we all know they don’t enforce it. That is one reason people do litter. CBRM should have all fast food outlets that supply the cups that are on our roadside, charge 5 cents a cup to apply towards a salary for one plain clothes litter enforcement officer who has the power to issue fines and also cleans up. The fines alone could pay for that salary. Also fine people who fail to clean up in front of their own property within 48 hours. They will get tired of picking up and this will create a state of community watch on the problem.

No public meetings. The scheduled meeting of the city’s Halifax Explosion 100th Anniversary Advisory Committee has been cancelled. I still think that thing’s going off the rails 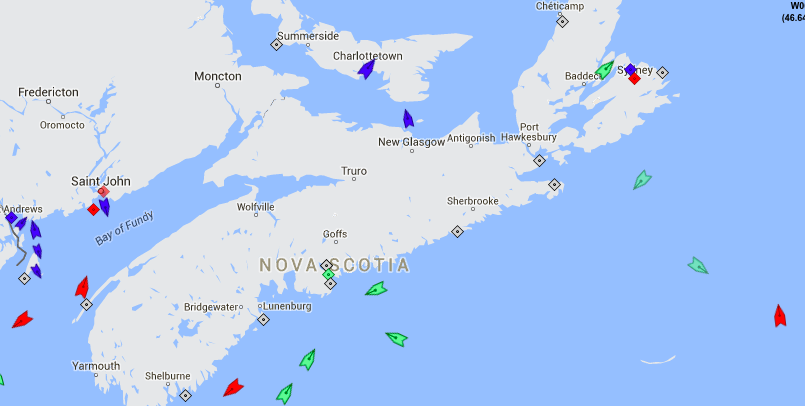 The seas off Nova Scotia, 8:40am Wednesday. Map: marinetraffic.com