You are here: Home / Featured / Brown-bagging it old school style at the liquor store

In a short press release issued yesterday — which still manages to confuse a security failure with a data breach — Halifax police announced they are not pursuing charges against the 19-year-old who was arrested:

Halifax Regional Police has concluded its investigation into the data breach that was reported to the police on April 7. After a thorough investigation, the police have determined there to be no grounds to lay charges in the matter.

“This was a high-profile case that potentially impacted many Nova Scotians,” said Superintendent Jim Perrin, Officer-in-Charge of Criminal Investigations Division. “As the investigation evolved, we have determined that the 19-year-old who was arrested on April 11 did not have intent to commit a criminal offence by accessing the information.”

I’ll have more on this later today.

A police release early this morning:

At 02:26hrs Halifax Regional Police responded with fire to 5450 Inglis St. 15 unit dwelling. Flames were coming from the roof. Police and Fire will be on scene for much of the morning and people are asked to avoid the area as Inglis St. is closed from Tower Rd to Victoria Rd and surrounding side streets are also closed.

Tempa Hull lives nearby and filmed this video of the fire department’s response:

At 5:43am, police updated their earlier release:

With respect to the fire scene, there are hoses running down the street and sidewalks along Inglis Street. Members of the public are asked not to drive over the hoses to get out of driveways as it could cause damage to the hoses.

As of publication, there’s no word on injuries or on the number of people displaced by the fire. 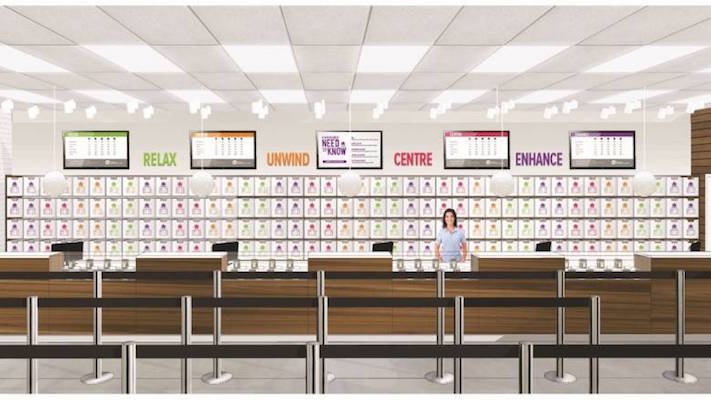 “Nova Scotians nostalgic for the good ole days when buying liquor meant having their favourite brand hand-delivered by a store clerk behind a counter are going to love the new cannabis store model the Nova Scotia Liquor Corporation will be using,” reports Jean Laroche for the CBC:

Customers will line up, consult menus and place their orders, which clerks will fill from behind a counter. The orders will then be placed in a sealed brown paper bag.

In the 11 NSLC locations being renovated to include pot sales, the transactions will take place in an area of the store that will be behind a frosted glass enclosure.

I get that people want to be able to smell the pot before they buy it, but I personally don’t want to buy cannabis laced with other people’s nostril hairs. So I hope they work that part out.

Laroche helpfully found this archival photo of a former NSLC outlet on Buckingham Street, back in the days when the clerk filled your order: 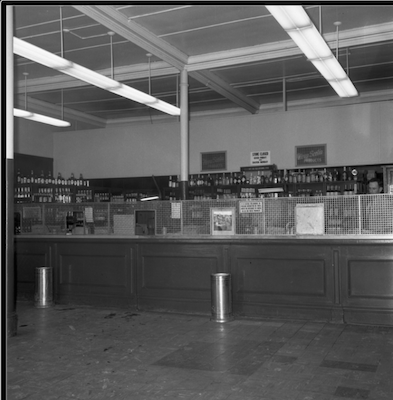 The cigarette butt collectors at each customer station are a nice touch.

Back when I was a kid, the state-run liquor stores in my native Virginia were even more stark. The clerk was behind bulletproof glass, with a little slot to exchange money and a drawer beneath to deliver the bottles to the customer. There were no bottles or advertising of any sort in sight. You had to know what you were ordering, and the clerk would go into the back room to retrieve your order, which was given to you in a plain brown paper bag. There was a liquor store in the little strip of stores in my neighbourhood — sandwiched about halfway between a cool little drug store with an honest-to-dog soda fountain at one end and a topless bar at the other end. Virginia was weird. 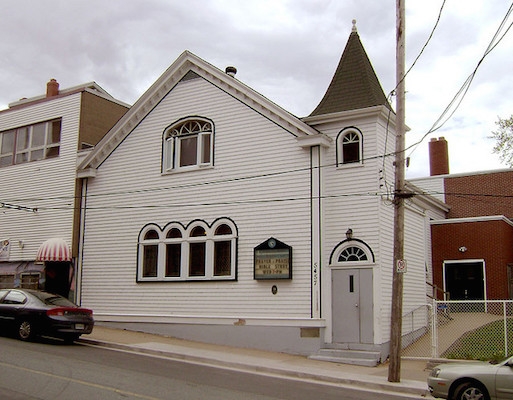 The change comes after years of public debate about the namesake of the street for which it is named, Edward Cornwallis.

Shortly after arriving in Chebucto Harbour in 1749, Cornwallis issued a reward of 10 Guineas on Mi’kmaq scalps, prompting calls — centuries later — for his name to be removed from schools, rivers, streets, parks and monuments.

City Council (Tuesday, 10am, City Hall) — there’s not a lot on the agenda. I’m not sure if I’ll have time to get to the meeting; if so, I’ll be live-blogging it on Twitter at @hfxExaminer.

Do Bacteria Have Sex? (Tuesday, 11am, Room 3H-1, Tupper Medical Building) — Rosie Redfield from the University of British Columbia will speak.

An Ocean of Opportunity (Tuesday, 4:30pm, in the auditorium named for a bank, Marion McCain Building) — Prince Albert II of Monaco is going to lecture on “sustainable development, especially as it relates to ocean management,” because who knows more about sustainability than someone who inherited both his title and his billion-dollar wealth? Of course Dal prez Richard Florizone and Wendy Watson-Wright, the CEO of the Ocean Frontier Institute, will be there because those types always like to rub elbows with people who inherit titles and wealth.

Innovation Rounds: Virtual Reality Can Put the Patient at Ease While Capturing Unprecedented Data (Wednesday, 8am, Weather Watch Room, Dickson Building, VG) — Ryan Cameron, CEO of Electric Puppets, will demonstrate “how virtual reality and eye tracking can create a diagnostic tool that has never been possible before.” 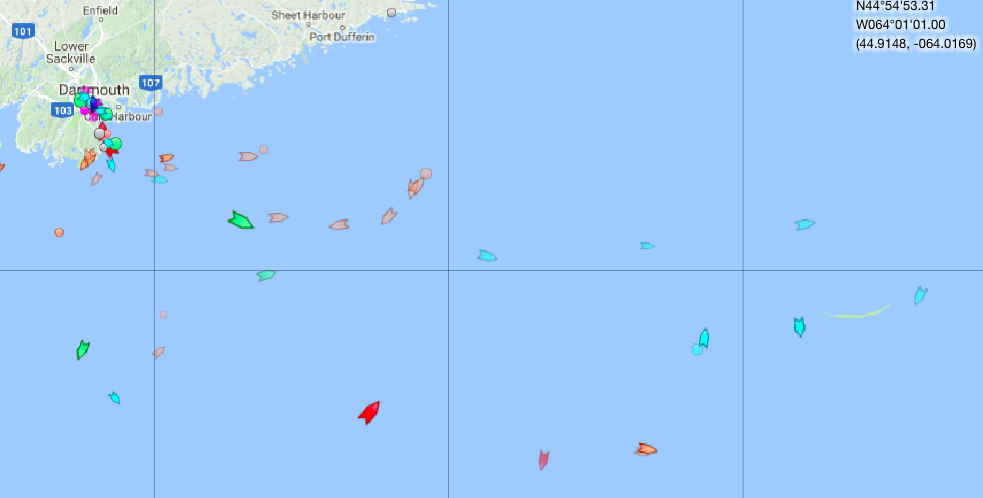 There’s lots of activity off the Halifax coast this morning at 7:30am. Multiple supply vessels (teal coloured boats) are working the offshore operations around Sable Island, while fishing boats (pink) work to the west. The green ship is the YM Essence, which left Fairview Cove this morning. The red ship is the Toftenviken, a passing oil tanker. Map: marinetraffic.com

I have an early morning appointment, so short and sweet today.