1. A brief and mundane history of being a woman

2. The ballet teacher tells us to “suck in” because “ballerinas don’t have bums or stomachs.” At gymnastics, we sit sprawled on the mats and our coaches tell us, close our legs, we look like we’re giving birth. Suck it up. Close your legs. The advice women will be given for the rest of our lives, even by judges blaming us for our sexual assaults.

3. One of the coaches at my gymnastics club mostly works with the older group, but sometimes he steps in to spot us. I go back to take adult gymnastics in university, and he is always there working out. We sort of laugh about him because he’s always wearing these tiny red shorts, but he’s a really good technical coach. Then one of the other women tells us he’s banned from coaching the little girls. He was caught touching some of them.

4. I’m maybe 14 and with my family in Minneapolis. We’re at a church concert or something, and for some reason I  leave, maybe to go down the street get a drink, and I’m walking along the street and a man in a big car pulls up next to me, starts driving beside me slowly, with the windows down, asking, am I by myself, do I have a home, do I want to get in and he’ll buy me dinner, and I’m walking faster and faster, and finally I say, my mom’s just coming! And run as fast as I can.

5. I make a new friend in Grade 9. My mom gives her a ride once and the whole time she talks graphically about sex. She says how she was in the weight room, and one of the football players said to her, I bet you’re good at this because it’s on your back. My mother is horrified when she gets out, forbids me to hang out with her. Looking back now, I wonder if she had been assaulted, if she was trying to tell someone, if she didn’t know how.

6. When the girls talk, teachers tell us, it sounds like a hen party in here. Quiet down, they tell us constantly. One day I’m standing at the bus stop and this old man comes up, strikes up a conversation, and then suddenly lunges forward and grabs my chest. Then he keeps talking like nothing happened. I’m shocked, and I don’t say anything and everybody at the bus stop just looks on. You’re trained your whole life to doubt your voice, to silence it, and then suddenly you’re supposed to know how to yell no, how to move away, how to scream, how to report.

7. My first summer of university, I take an art course in Italy. I meet a guy there. I’ve never had a boyfriend. He comes to the hotel on his moped to pick me up. We drive around gardens in the night, just like in the movies. A couple of days later he takes me to some kind of art colony, and when we go upstairs, he pushes me down on the bed, holds me down, pulls my clothes down, tries to push himself in. As he’s lying on top of me thrusting, a man comes in the room and starts screaming, this is not a bordello. He rolls off me and we leave. For years I tell myself my “first time” was a romantic summer fling, like a fantasy. I suppress the memory of the crushing relief I felt getting on the train, getting away from him as fast as I can.

8. My second year of university a group of us go out to the club. These three older guys in law school come over, offer to buy us drinks. One of our friends starts drinking with them. We’re all immigrant kids and we lied and told our parents we were at the library studying for exams. We have to get home, but she won’t come. We try to pull her away from them, and she tells us to leave her alone, starts yelling at us, fuck off, get out of there, go away. We don’t know what to do, and we’re scared of our parents, so finally we leave her, telling her to make sure to call us when she gets home. We don’t hear anything. The next day her mother calls around asking us if we’ve seen her daughter, where is she, and we don’t know what to do then either. And finally she calls and says, she woke up in an empty swimming pool, naked, covered in bruises. She didn’t know what happened or how she got there. The homeowner found her a bathrobe and called her a cab. She doesn’t report anything. Later she gets a reputation for sleeping around, drops out of school, gets pregnant. Those guys are all lawyers now. I’m sure we’re the only ones who feel guilty about what happened.

9. Every year I have taught university, at least one student has disclosed a sexual assault to me. Sometimes students do it in emails, tell you why they haven’t been to class. Sometimes they come to the office and cry. Sometimes they write papers about sexual assault and reveal what happened to them. It’s the same for the other women professors. We encourage our students to go to counselling and they tell us, they tried, it’s a six month wait, they can’t afford private care. It’s not your fault, we say while handing out kleenex helplessly. Take all the time you need.

10. Take this as a narrative of the every day, of the normal. Things we accept and don’t talk about, don’t even consider worth talking about. Oh blah blah this old man touched my nipple but anyway. So what happened to that girl from high school. Remember that teacher who used to look at our breasts? So anyway, what else is happening.

Until Rehtaeh, or Ghomeshi, or the taxi driver, and it bursts out in protests, and signs, and anger, and grief. We’re not “uninformed,” we’ve been studying this our whole goddamned lives, we learned it over the bodies of our friends, and the discarded girls in high school, and the way we learned to cover our bodies, close our legs, walk quickly without looking around, try to move away slowly, text a friend to call and pretend it’s an emergency, get up to go to the bathroom and call from there, at least manage to remove your tampon, push his hand off without looking like a bitch, message women on Facebook just to let them know, just to tell someone, just to be believed.

Now that I write, women message me with their stories. They say, that story in the news, this is what happened to me. Don’t tell, they say, I just wanted to let you know.

I spend International Women’s Day in the prison, sitting in a room with a woman in the secure unit, and she says she wants to write a poem about human trafficking. “It’s always the girls who are young and vulnerable” is her first line. We write her poem on the white board, with a marker she demands from the bubble, and when she goes back to her room she wants to leave it there, to let people see, to let them know.

2. This week in drama

Adrian White, “finance director” of Students 4 Change, formerly Students 4 Students (there are allegedly more than 4 students represented by the organization) with the decision over Dan Trivett, Halifax West High School librarian, who dropped out as the candidate for Bedford after accusations of “cyberbullying” White. The tweet in question: 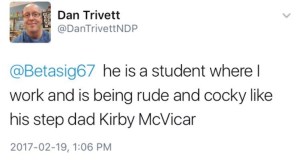 White, whose previous hits include “Work-to-rule is not an effective form of labour negotiation,” scored the knockout blow with, “I just felt it was inappropriate of him to conduct himself in this way on social media.” Damn, kid.

White told CBC “it’s no more library for myself, I can’t go in there.” That’s okay, surely soon the frivolous and time wasting libraries will be eliminated in favour of more testing 4 students, and more data entry 4 teachers after the end of work 2 rule.

Never mind all that though, I was reading White’s Twitter and he retweeted a video of Stephen McNeil dancing with Maritime Bhangra:

Weird how when they go left, McNeil goes right. It’s almost like he’s out of step with people in Nova Scotia.

Meanwhile, over in the Valley, Kentville triumphs over The Board as the Apple Blossom parade returns to Kentville. (You can read a summary of the nefarious twists and turns at the link.) The decision was aided by a last minute withdrawal by New Minas, who noped out of the situation:

“We said we were willing to help out and in an effort to be good citizens agreed to host the parade. We are disappointed with what has transpired since then and do not want to be caught in the middle of a public dispute between the Town of Kentville and the festival committee,” [New Minas village commission chairman Dave] Chaulk said in the release.

Kentville mayor Sandra Snow previously alleged a “a deliberate and malicious freeze-out of the town” and accused the board of “a duplicitous effort levied against the Town of Kentville and the citizens of the Valley.”

“We’re all here with big smiles on our faces and looking at how we can up the ante and make this one of the best festivals ever,” Mayor Sandra Snow said in an interview after the release.

“We’ll let bygones be bygones, and let’s move forward and make it a success and remind people why they come to the Valley for this event.”

You definitely know that participating in the  leadership competition teaches public speaking, because interim board president and former queen Alyxs Chamberlain yet again “did not respond to requests for comment.”

Education minister Karen Casey is magnanimously willing to allow teachers to continue to volunteer their free time to coach sports.

“During the transition period, I think we want to just allow teachers if they want to, to continue to do that voluntary work, and I believe they will,” Casey said Thursday.

Casey also suggested that members of the public could, if they want to, just come over and clean her home, maybe walk her dog, wash some dishes, and that she would generously allow that to happen, as difficult as that is for her.

Basically, you see, SOME teachers LOVE CHILDREN and their work is FROM THE HEART (note: Casey is not an anatomy teacher.) ARE YOU ONE OF THOSE TEACHERS? HUH? Or are you an EVIL HEARTLESS TEACHER WHO HATES KIDS AND YOUR WORK COMES FROM LIKE YOUR ARMS AND BRAIN.

“That is a teacher’s individual decision to make, because if it is voluntary then that comes from the heart,” she said.

“Some are going back and volunteering because they love the work and they love their kids, and others have chosen not to. That’s part of that transition.”

I have video of the press conference here:

Editor’s note: We’re beyond excited to announce that El Jones has been hired to be the 15th Nancy’s Chair at Mount Saint Vincent University. Her two-year term starts in July.