You are here: Home / Featured / Breaking all the souvenirs: Morning File, Tuesday, August 25, 2015 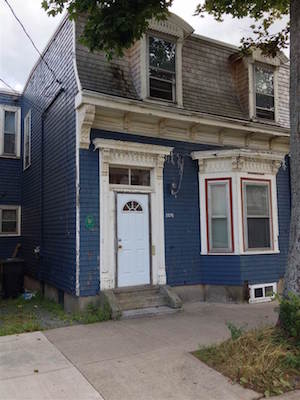 One of the Harbour City Homes houses that is for sale.

The non-profit housing agency Harbour City Homes has placed nine of its properties up for sale, putting 34 families at risk of losing their homes to unaffordable price increases, reports Chris Benjamin.

The tenants are hoping that the city will buy back the properties so they can manage the housing as a cooperative.

A woman has told the Chronicle Herald that she was sexually assaulted by a taxi driver after the Canada Day concert at Alderney Landing last year:

She said she was allegedly (sic) victimized in a manner that has similarities to an alleged May 23 incident involving taxi driver Bassam Aladin Al-Rawi, who was later charged.

She said the driver took her to a parking lot and assaulted her.

“It was darkly lit; I was under the influence of alcohol,” she said.

“It was forceful. He made me touch him and he touched me digitally and he wanted to have sex, from what I remembered.”

She said the driver tried to force himself on her in the hope her intoxication would prevent her from defending herself and that she wouldn’t remember.

She said she has had trouble remembering the driver’s appearance, except that he was of Middle Eastern descent and in his 30s or 40s.

“I kept telling him to take me home,” she said, adding that he eventually did.

In the Al-Rawi case, the Halifax council’s Appeals Committee rejected staff’s advice to completely suspend Al-Rawi’s licence pending a court judgement, and instead allowed him to continue driving, but only in daylight.

Links to articles detailing the suspensions of cab drivers are found in Rubin’s post.
(link)

“In Halifax, police say they do stop people, but deputy chief Bill Moore says those stops are not based on race, rather suspicion,” reports the CBC:

I’ve had my data collected by the cops. A couple of months ago I was walking down Maynard Street and found a wallet on the sidewalk. The wallet contained money and some bank cards, but unfortunately no ID with a street address or phone number. Figuring the woman who had lost the wallet must live nearby, I tweeted out that I had found the wallet, but got no response.

Against my better judgement, but at the urging of several people on Twitter, I called the police and told them I had found the wallet. After a while an officer came by to collect the wallet. I assumed that would be the end of it: I was a good citizen, turing in found property, thanks and good-bye, right? But no. Apparently, finding a wallet and turning it in is “suspicious.” The officer asked for my name, my address, my date of birth. At no time was I told that I could refuse to give that information. I was given no receipt acknowledging that the information was collected.

I did ask the officer why he needed my information. “It’s just the form,” he said. I suspected that I had the right to refuse to give the information, but that would just start a big hassle with the cops, right? So I gave it, and now my name, address, and date of birth is part of some giant database of “suspicious” people, and who knows who has access to it. Maybe it’s turned over to the US border patrol. Or CSIS.

The worst of it is no one has ever told me if the wallet was returned to its rightful owner. 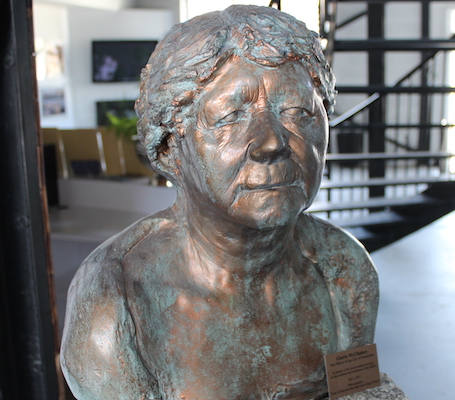 Developer Francis Fares commissioned this bust of councillor Gloria McCluskey and displays it at the head office at King’s Wharf. Photo: Halifax Examiner 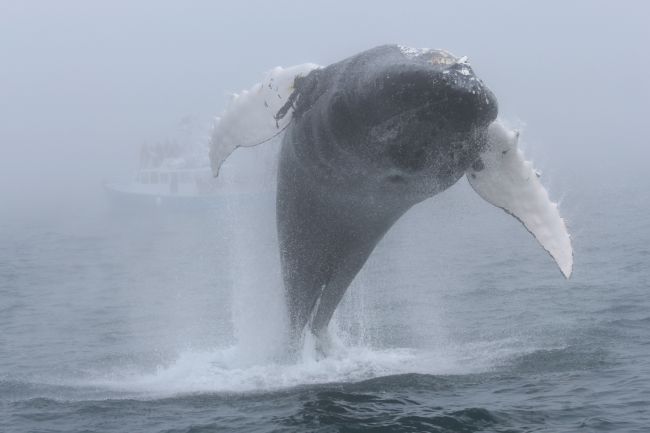 Penny Graham took some great pictures of a whale breaching off Brier Island. 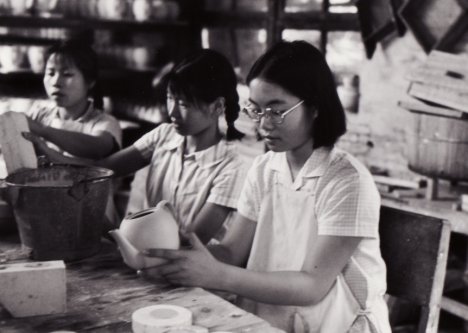 Jan Wong (in glasses) aged 19, in 1972. Working in a pottery factory in south China. Photo: Jan Wong via the Daily Mail

Jan Wong can relate to the young western women who have left their homes and travelled to join ISIS. In 1972, at age 19, Wong did something similar: she left her family in Montreal and joined Mao’s cultural revolution:

Teens are hard-wired to run off in search of adventure. They just need a little alienation, a middling desire to search for one’s roots and a breathtaking ignorance of the real world.

The young women who slipped away to join ISIS apparently felt marginalized in the West. They were attracted by a fanatic version of their religion, the inclusivity of sisterhood and a naive ideal of marriage.

Growing up in Montreal in the 1960s, I was a visible minority before the term existed. I was Canadian born, but people around me assumed I wasn’t. I wondered if there was any place I truly belonged.

Naturally, I majored in Asian studies. That’s what young ethnics do when searching for their identities. They study themselves, or try to.

In this fog of confusion, a single evangelist can trigger an inordinate response. In my case, a left-wing history professor at McGill University described communist China in glowing terms. It was a utopia, he said, where everyone is equal.

Wong went to China and embraced the perverse turn Maoism had taken in the 70s, going so far as to “rat out” a fellow student for impure thoughts. Eventually, Wong turned her back on Maoism and came back to Canada, perhaps a little wiser. “Now I’m so bourgeois I have two dishwashers in my kitchen,” she writes.

Is it or isn’t it? The question refers to an article in the Cape Breton Post (‘Overpass safety a concern,’ June 6.

Here it is more than two months later and still the overpass, which is located where Highway 125 intersects with Highway 105 at exit 20, just sits getting worse and nothing is being done to it.

Back on June 6, Department of Transportation and Infrastructure Renewal bridge engineer Kim MacDonald told the Post that an inspection of the overpass was conducted “a couple of weeks ago.”

So, according to that statement, the inspection would have been in May.

She also told the Post the department was aware of issues at that site during the winter and that the structure is already included in the upcoming spring/summer maintenance and repair schedule.

So, according to that statement, the department knew about safety concerns regarding the overpass since January or February.

That makes it close to eight months to date and, yet, nothing was done in the spring and now there is less than four weeks of summer left. So when is the work going to start?

Oh, right, the department didn’t say which spring or summer maintenance and repair schedule it was planned for.

Well, I did a little digging and according to the department’s five-year maintenance plan for highway and infrastructure improvement there is no mention of this overpass being repaired at anytime.

On July 2, I called Transportation and Infrastructure Renewal and road maintenance in Sydney to try to talk to someone who could give me a straight answer to my questions. I was sadly mistaken for all I got were more pass-the-buck answers.

He also said that it wouldn’t be replaced with a new overpass. Instead, there would probably just be some patch work to the road and understructure and he said he didn’t know when this will happen.

He said we just have to wait and see what Halifax wants to do.

Well, in my mind, that’s just another pass-the-buck answer. All I want is the truth to my questions and nobody is willing to commit themselves to tell me.

Why do the people of Cape Breton have to sit back and wait on a decision from someone on the mainland before we can do anything?

I know that the cost of replacing the overpass will be high, but what cost do you put on a human life?

In my opinion, the condition of that overpass is just an accident waiting to happen. I am only one small voice but with some feedback from the people of Sydney Mines, North Sydney, Florence and Bras d’Or we can make government officials listen to us and maybe just maybe have them do something about the overpass.

On July 8, I had a meeting with MLA Pamela Eyking and she could not believe the condition the overpass is in. She looked at the pictures I had to show her and right off she noticed how the supports had shifted. She told me that she was behind me all the way and that she will lobby to get something done.

As I said before I am only one small voice but I started this and I plan to go as for as it takes to see this come to a happy conclusion for everyone.

The link also contains the best cranky comment of the day.

No public meetings. The city had a couple of meetings scheduled today, but it’s too hot and humid so they cancelled them.

In the ever-increasing collection of, er, interesting photos captured by the Google car, Reddit poster king_uzi gives us this gem, caught at Stillwater Lake: 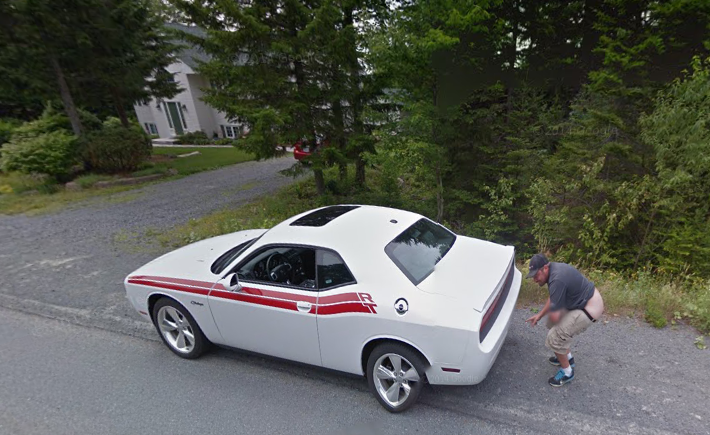 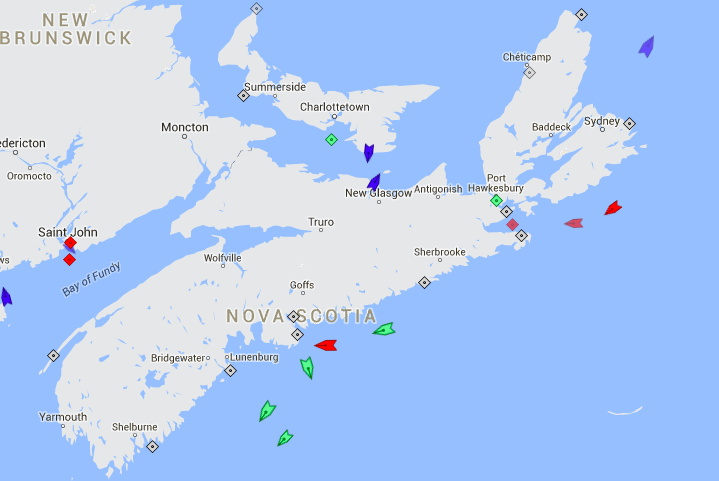