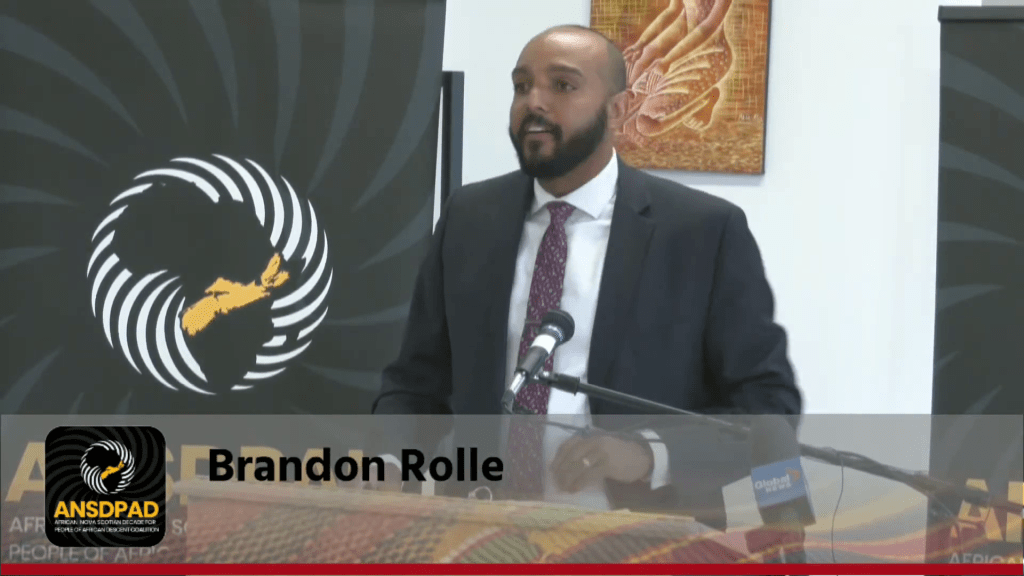 A screenshot of Brandon Rolle speaking at a news conference last month.

Last month, Nova Scotia Legal Aid lawyer Brandon Rolle spoke at a news conference about his role in a landmark decision by Nova Scotia’s highest court when it comes to sentencing Black people in the province.

Rolle had argued on behalf of the African Nova Scotia Decade for People of African Descent Coalition (ANSDPADC) against an appeal filed by the Crown attorney’s office.

The Crown had appealed the sentencing of a 24-year-old Black man, Rakeem Anderson, who had been convicted for possession of a loaded handgun.

The Crown wanted Anderson to serve a two- to three-year prison sentence. Instead, the judge gave him a community-based sentence based on an Impact of Race and Culture Assessment (IRCA) as was requested by the Crown.

In what Rolle said is a rare instance, a total of five Appeals Court judges presided over the case when it was argued back in March. On August 17, the sentence was unanimously upheld, and a precedent was set making IRCAs now mandatory whenever a Black person is sentenced in Nova Scotia.

The Examiner recently spoke to Rolle to learn more about the IRCA decision.

“We’ve been ordering Impact of Race and Culture Assessments since 2014, and those have been open to interpretation by whatever judge is considering those reports. So we’ve gotten different outcomes,” Rolle said. “We’ve gotten some judges who just considered the information but didn’t apply it to sentence, and so I think the Crown, in this case, recognized the need for that guidance from our highest court and they came back with a very clear message saying … you, first of all, should be ordering these any time an African Nova Scotian is sentenced.”

“Obviously when we talk about this case people get caught up with the fact that … it’s a young Black man with a loaded firearm, and whether or not that person should go to jail,” said Rolle.

“But to me, it was broader than that. As well, it’s saying no, we’re actually going to come up with comprehensive guidelines about how we sentence African Nova Scotians. And to me, that’s where the value lies.”

“Chief Judge Williams, at the provincial court level, imposed a community-based sentence, and probably would have imposed jail but for the evidence that came through the Impact of Race and Culture Assessment.”

Only part of the solution

At the news conference last month, Rolle, who is Black, spoke proudly about how rare it is to be able to speak at the court of appeal about the lived experiences of African Nova Scotians as it relates to things like the justice system, slavery, and colonialism. He credited the court for “taking a leadership role.”

Still, when speaking to the Examiner, Rolle acknowledged that’s not enough.

“It’s too simplistic to think that something like this is going to fix the system, but it’s certainly a positive step forward,” he said.

“For me, this is only part of the solution because at the sentencing stage, obviously, we’re talking about a point in the process where the person’s already been convicted. They may have encountered systemic racism all throughout the process from the very front end when they encounter police officers, and then the charges are laid, and then how the prosecution’s handled, and then evidence throughout the trial,” said Rolle. “There are a lot of opportunities to be exposed to systemic racism before sentencing.”

“I think there’s a lot of work to do when we think about things like how police interact with our community members, with how Crown attorneys make decisions about whether or not to lay charges or whether to refer something to restorative justice or how we select juries that are gonna be free of racial bias — how do we ensure that?”

“Or … Crown discretion with respect to having a jury. In some cases, like a murder case, you can’t get a judge alone unless the Crown consents. And so, what sort of considerations are going into that? Are they thinking about the fact that, we’ve acknowledged that the (criminal justice system at large) has systemic racism, and, of course, that’s going to infuse our juries.”

“So, a lot of opportunities that aren’t addressed by this decision.”

I asked Rolle if he anticipates any sort of potential ignorant or racist reaction from the decision with respect to things like public commentary or interpretation of IRCAs, or even police and prosecutors potentially overcharging Black suspects in an effort to cancel out the impact of IRCAs at sentencing.

“I think the main backlash that you’ll see when it comes to sentencing is ‘Oh, someone’s gonna get a discount now because of their race or their culture,’ and, of course, we know that that’s not the case. We’re trying to actually address a problem of centuries of mistreatment and overrepresentation in the system.”

“Really what we’re saying is we’re gonna give you more information about this person. And, you know, it’s not going to equate to a free pass, by any means. But it’s going to help the judge understand who this person is, what their worldview is, how they approach conflict based on how they were raised in the community, things like that,” he said.

“It gets to a deeper level of things like remorse. If somebody who’s sitting down with a probation officer — which is our traditional method of getting this information before the court, something called a pre-sentence report, where someone would sit down with a probation officer for an hour or two — are they really going to be able to connect with this client if they don’t look like this client or understand that client’s worldviews? So, it’s really about getting that information before the court.”

“So, to me, it’s nothing but a positive. I understand the question and the potential for someone to maybe think that they might get a free pass because there’s IRCAs out there, but I think the reality of someone who’s caught up in that lifestyle, or engaged in criminal activity, or find themselves on a pathway to criminality, (they) have deeper rooted issues than thinking that an IRCA might give them a free pass.”

This past July, the province announced that it is spending $4.8 million to launch an “African Nova Scotian Justice Institute.” The institute will be led by ANSDPADC, and Rolle said he’s optimistic that will work to address some of the gaps he said still exists despite the IRCA decision.

“To me, that’s the sort of multifaceted approach you’re going to need to get at some of these deeply entrenched problems within the system.”

“Having legal resources specifically for the Black community to talk about Black issues and advocate for African Nova Scotians within settings like the courtroom or The Human Rights Commission. To have bail support programs so we can transition from remand to the community quicker and we’re not having as many people sit in jail waiting for their trial. To have transition supports for after you come out of jail after serving your sentence is gonna be extremely important. To have programming within our custodial institutions to have these IRCAs.”

Though optimistic about the potential of the racial justice institute, Rolle said he feels the onus shouldn’t rest entirely on its shoulders.

“I think the Crown attorney’s office has a huge role to play, and so being able to think about how we address systemic racism within that institution will be a big factor. And then, of course, outside of justice, we know that we need multiple solutions within health, economics, education,” he said.

Additionally, he said more questions remain with respect to racial justice, despite both the IRCA decision and the launching of the racial justice institute.

“What is our relationship with the police like? What does the data look like, in terms of outcomes at courthouses? We know that Black people are disproportionately represented in custody and in the system at large. How are these IRCAs going to impact sentencing outcomes? Can we start tracking that data?”

All in all, Rolle is optimistic about how racial justice will play out going forward as a direct result of the case he helped argue in the Nova Scotia Court of Appeal surrounding the use of IRCAs.

“It’s going to obviously have an impact here in Nova Scotia, and I think what will be interesting is to see the impact that it might have nationally,” Rolle said.

“We know that federally there’s been funding to roll these IRCAs out in every jurisdiction, so I think we’re just starting to see this take off, even though we’ve been working on it a long time here in Nova Scotia, and I think it’s gonna have a national impact, which Nova Scotia should be sort of proud about in terms of being the ones who introduced this to the country.”