Saturday, Premier Stephen McNeil set July 14 as the date for byelections in the Dartmouth South, Cape Breton Centre & Sydney-Whitney Pier ridings. The election signs were up within hours.

Back in October, I pointed out that Greg Wilson’s plan to retrofit the old Clairtone factory in Stellarton and turn it into a medical marijuana grow-op he dubbed Vida Cannabis has its ugly side:

The background: last year the Conservative government passed legislation that made it illegal for anyone with a medical marijuana licence to grow marijuana at home or to acquire it through another registered home grower. Instead, all medical marijuana users will have to buy the drug through Health Canada-approved mega-grow projects like Wilson’s. That law was to come into effect on April 1 but is now tied up in the courts, though with millions of dollars at play the plan is clear: medical marijuana can only be produced by profit-making giant corporations.

Further, Wilson sees that the legalization movement will likely succeed. “Health Canada predicts [medical marijuana] to grow to a $1.4-billion annual market in a decade, but if it is legalized for recreational use, the prediction is for a $6.7-billion market,” Wilson tells [Chronicle Herald reporter Aaron] Beswick. You can almost hear Wilson rubbing his hands together in glee as he counts the potential profits.

Last Wednesday, the Chronicle Herald reported that Vida Cannabis was facing unexplained delays in getting approval from Health Canada.

The operation is the brainchild of self-styled financial guru Andrew Wile, who was born and raised in Bridgewater. Prior to setting up a Delaware (USA) company to operate Vida Cannabis, Wile founded an online news site called The Daily Bell, which features the ramblings of a plethora of “free market” thinkers and climate change deniers. In the year prior to announcing the formation of Vida Cannabis, Wile also published dozens of “touts” of medical marijuana as a sound investment opportunity.

Wile was also implicated by the United States Securities and Exchange Commission in a major stock swindle and, rather than risk a serious prison sentence, reached a plea agreement with the U.S. Justice Department.

Wile grew up on the outskirts of the calm little Canadian town of Bridgewater in Nova Scotia. A big deal there when he was in school in the 1980s was to smoke some weed and go downtown to spit off the bridge over the LaHave River. Lunenburg County was and is famous for some of the best Christmas trees grown the world over and, after a business degree from St. Mary’s University in Halifax, Wile moved to southern Florida, where he started a Christmas tree selling operation.

He did very well there for himself, this son of New Scotland, whose ancestors started coming to Lunenburg County in 1844.

Four years before receiving the complaint, Wile was ensconced in a million-dollar, five thousand square foot, five bed and bath mansion with elevator and hardwood-paneled library on the edge of the Everglades Wildlife zone. From there, he ran several investment operations, including Scotia Capital Management Services, which, in 2005, Wile changed to Yang Capital Management, Inc [also called Yang Investment Group], but dissolved that firm at year’s end.

Gillespie detailed the SEC complaint against Wile, then continued:

Last week, Wile – with long-time family friend, business colleague and Vida Cannabis CEO J Gregory Wilson — traveled to Stellarton Nova Scotia, just miles away from his boyhood home of Bridgewater, to give the media a walk-through of an abandoned 300,000 sq ft factory, which they say will be the home base for North America’s biggest legal pot farm.

During the walk-through, Wile again also flatly denied the allegations made by the SEC.

Other than the run up of more than a dozen in articles about marijuana during the past year on Wiles’ Daily Bell news blog, Vida Cannabis Corp seemed to rise out of the mists, being incorporated in Delaware on February 17, with a web address bought by Wile and installed on February 18. Wile and Wilson have told media in Nova Scotia that wholly-owned subsidiary, Vida Cannabis Ltd. is registered with the Canadian government, a claim Corporations Canada denies.

None of Wile’s businesses appear to registered in Nova Scotia

The Vida “team” appear to be working part time on the project, as many have several other irons in the fire. Wile, who is not named as an officer, appears to be the one running the show to date. He also runs The Daily Bell, a very active online news blog, catering to the ultra-conservative, government-hating, gold-loving, penny stock trading crowd, fond of free market libertarianism, conspitacies galore and Austrian economic theory.

3. Why do you hate veterans? 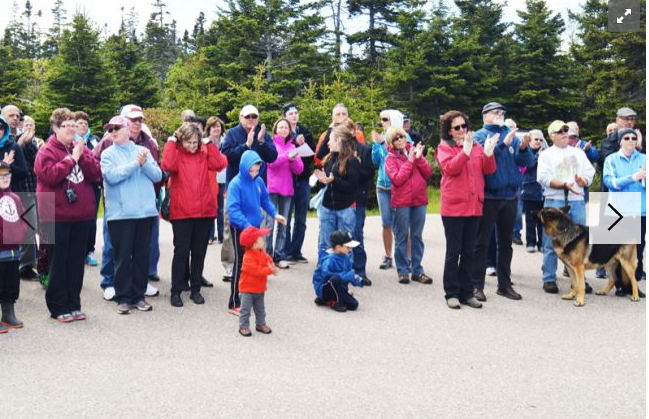 One-hundred and eighty people, some pictured above, met at Green Cove yesterday to express their support for the Never Forgotten memorial, reports the Cape Breton Post:

“There is no better place than Green Cove — our veterans deserve everything we can give them,” said Neil McKinnon, past president of the Dominion Command of Army, Navy, Air Force Veterans in Canada.

“I’m here because I love veterans,” said Theresa MacDonald, an 86-year-old Aspy Bay resident who attended the gathering but wisely stayed protected from the chilly ocean winds in the warmth of her daughter’s car.

The event was especially emotional for MacDonald whose late husband was a veteran. She also shed a tear for her brother-in-law, whose body was never recovered after he died in the D-Day invasion in 1944.

Carolyn Burton said the rally was an event she felt she had to attend and travelled down from Dingwall with family and friends.

“We’re here to support this wonderful idea that honours our veterans — they deserve it,” said Burton.

Clearly, if you do not support building a gaudy 10-storey statue plastered with corporate advertising in a National Park, you hate Canadian veterans.

You know who else hated Canadian veterans? Hitler, that’s who.

In 2011, veteran journalist Bruce Wark retired from his teaching position at the University of King’s College and moved to Parrsboro. But of course Wark would not fade away quietly; after a short and controversial stint at the local community radio station (my recollection is that Wark was kicked off the air for critically reporting on the station itself), he’s started the New Wark Times, a online media site devoted to news and commentary for the Parrsboro area.

On the site now are articles about the old organ in Trinity United Church, an update on the situation at the local Co-op store, and a couple of articles on the town’s desire to ape Halifax’s botched “tax reform” move by instituting a flat fee to pay for fire protection and street lighting — in effect slashing taxes on pricey properties and making up the lost revenue by increasing taxes on low-value properties. On the latter, Wark pointed out that a survey of residents conducted by the municipality violated the Personal Information International Disclosure Protection Act.

Another issue followed by Wark is the CRTC’s threat to pull the licence of local community radio station CICR, operated by the Parrsboro Radio Society. The “CRTC is concerned about various issues including the PRS failure to file proper and timely financial information as well as its failure to file logger tapes and program logs when asked to do so,” wrote Wark.

I bring it up only because the Parrsboro Radio Society’s response was so typically Nova Scotian. As Wark reported:

The Parrsboro Radio Society (PRS) convened its first members’ meeting yesterday since it became apparent on May 15 that the CRTC may not renew CICR’s broadcasting licence, but no one raised the issue, not even in passing.

Instead, facilitator Mary-Irene Parker asked members to suggest wording that could be included in a PRS statement of values, a mission statement and a vision statement.

During yesterday’s meeting, Mary-Irene Parker urged members not to raise issues concerning the history of the radio station, but to look ahead, going forward. Unfortunately, the CRTC is clearly looking at the history of the last seven years, especially issues of non-compliance with regulations and policies. In the end, commissioners will weigh those issues and decide the shape of CICR’s future or even if it has one.

Looking around on the site, I see Wark repeatedly raises issues related to the community radio station, for instance:

This bylaw does not define vague terms such as “embarrassment” or “damage” but it does apply, not only to the PRS itself, but also, to “any of its membership.” So, for example, if a member reported on Facebook that the schools cannot send young people to volunteer at the station because landlord Ross Robinson’s name is listed on the National Sex Offender Registry, would that be grounds for expulsion? Although the information is true, it’s also highly embarrassing and damaging to both PRS and Robinson. Instead of moving the station out of Robinson’s house — as they should so that young people can volunteer there — they’re threatening members with expulsion if they dare to raise this issue.

On June 13, at 5 p.m., a 30-year-old man was crossing the westbound lane across from 7015 Bayers Road when he was hit by a car travelling west on Bayers Road. The pedestrian was not in a crosswalk. He was transported to hospital by EHS for treatment of non-life threstening injuries after a nurse who was in the area tended to him.

This collision remains under investigation and no charges have been laid.

6. Brooklyn of the North

Some people who live in The Darkside are upset that the city puts up signs saying the place is called “Halifax,” and have started a petition calling for Halifax’s Little Sister to be called by its rightful name.

Full disclosure: I live in Boonamoogwaddy. 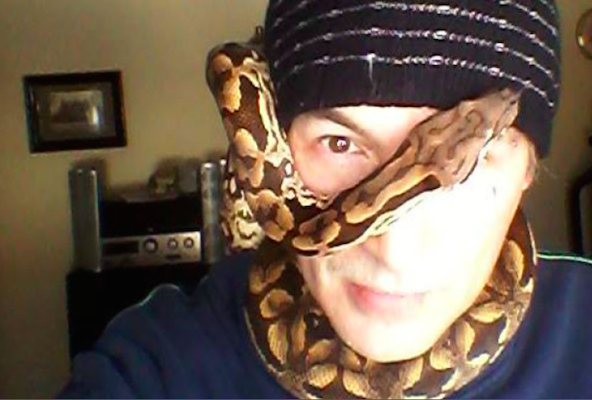 Richard Dares’ snake appeared to have escaped its Highfield Park apartment, causing a bunch of commotion for three days. But then Dares discovered that the snake never left the apartment after all.

Stephen Kimber wants a non-binding national referendum on the future of the Senate.

2. Back to Our Roots Urban Farm 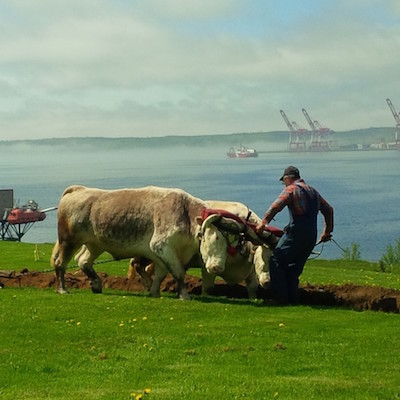 Hello Dartmouth interviews Hillary Lindsay, the coordinator of the Back to Our Roots Urban Farm behind the Nova Scotia Hospital.

It was interesting to read Roger Taylor’s June 10 column on the proposal to monitor the gas pumps. I have visited our local MLA, Leo Glavine, four times in an attempt to find out what they hope to accomplish. I still have absolutely no explanation.

This whole idea looks like a ridiculous waste of hard-earned taxpayers’ money. I hope Mr. Taylor has better luck than me getting an explanation. 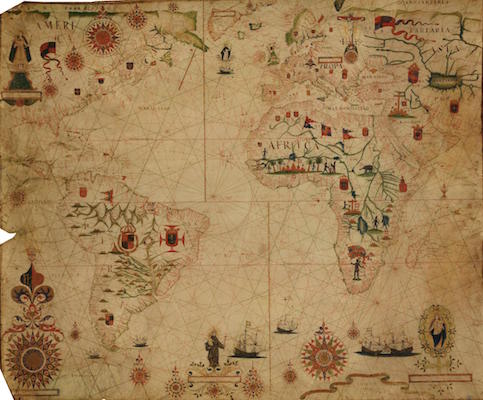 The Library of Congress has published the above 1633 map of the Atlantic, drawn by Portuguese cartographer Pascoal Roiz (detailed version here).

I was particularly interested in the entirely fictional Frisland, just southwest of Iceland and northeast of the body of Christ: 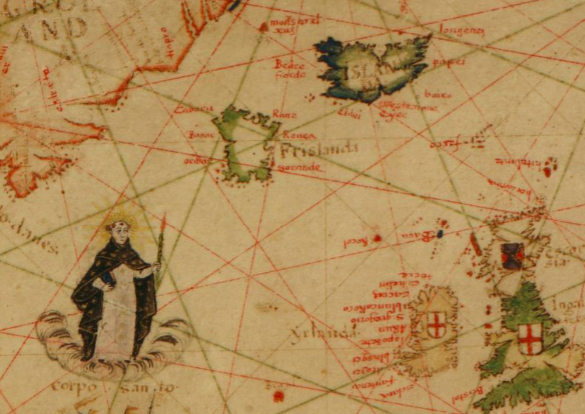 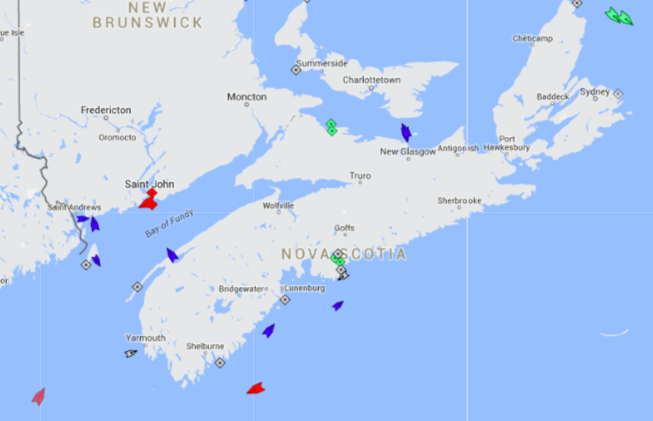 The seas around Nova Scotia, 8:40am Monday. Map: marinetraffic.com