You are here: Home / Featured / Blackface effigy erected in Parrsboro is just the latest example of Nova Scotia’s ingrained racism

A blackface effigy on a property outside Parrsboro has been removed after concerns were raised by African Nova Scotians and Cumberland-Colchester MP Lenore Zann. 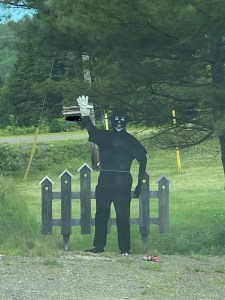 The figure referenced traditional minstrel show symbols including the white glove and painted features exaggerating the lips and staring eyes. These elements of blackface costuming were intended to exaggerate African features and represent African people in a dehumanized, grotesque way. 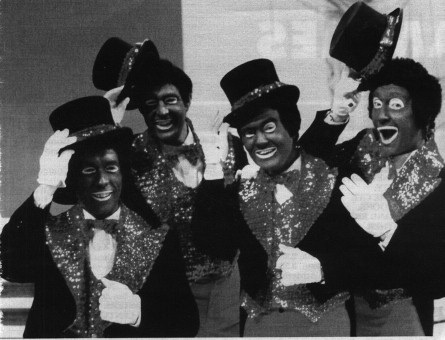 Minstrel shows developed in the early 19th Century in America. The shows included comic sketches, musical performances, dances, and other variety acts. The shows were largely performed by white people in blackface makeup and costuming that mocked Black people as lazy, unintelligent and foolish. Minstrel shows were not confined to the United States, and the shows were also performed in Canada, including at elite universities.

Dr. Cheryl Thompson, an Assistant Professor at Ryerson University whose research traces the evolution of blackface in Canada, describes the presence of blackface throughout Canadian institutions:

Blackface in Canada is not a recent phenomenon. Rather, it dates back to the days of blackface minstrelsy — a form of 19th and early 20th century entertainment that expressed nostalgia for slavery and racist violence, and employed stereotypical representations of Black people. Contrary to popular belief, blackface minstrelsy was a popular form of entertainment in Canada, much as it was in the United States. American minstrel troupes travelled frequently to perform in Canada, while Canada also had its own minstrel troupes…

Blackface was also a favourite form of Canadian entertainment for local amateurs at fund-raisers for schools, police forces, community groups, churches, and charitable organizations. Indeed, the writer of the Canadian National Anthem, Calixa Lavallée, performed often as a blackface minstrel throughout Canada and the United States, thus it might be said that the blackface is as Canadian as O Canada.

The Examiner reached out to Cheryl Thompson for comment on the blackface effigy. Thompson responded:

Since I’ve been doing this work, studying Canada’s history of blackface, numerous white Canadians have reached out to me with tales of blackface in their past. For some, it was 40 years ago living in small town Nova Scotia, for others, it was as a child or via a parent in the ’50s and ’60s in churches and social clubs in Toronto.

That a person(s) in 2021 would erect a cutout of a blackface figure — this can be deduced by the white gloves, which is a standard feature of blackface repertoire — is a loud proclamation that they are clinging to racist ideologies of 70+ years ago.

Part of the challenge of eradicating anti-Black racism is the persistence not of white guilt but of folks doubling down on white supremacy, which involves the demarcation of space. While this figure appears to have their hand raised in a wave, it is not saying hello. Instead, it is signalling that Black bodies are not welcome in the vicinity of this house.

This is the Canada that too many people simply refuse to see and accept as being deeply entrenched into the fabric of our culture. The figure is not by accident nor did the perpetrators “not realize the figure was problematic.” They know what they are doing — espousing hate. Period.

In September 2019, multiple photos emerged of Canadian Prime Minister Justin Trudeau wearing blackface. Numerous other incidents of blackface in recent years indicate that despite each renewed cycle of shock and denial whenever the issue arises, blackface performance has never gone away in Canada. 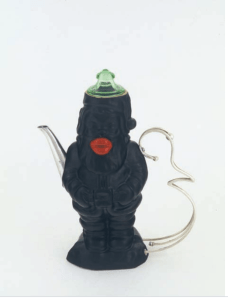 “Black Santa Coffee Pot” by Leopold Foulem. The piece caused controversy when displayed at the SMU Art Gallery in 2007.

Lawn ornaments depicting Black figures were common in rural Nova Scotia until relatively recently. According to David Pilgrim, curator of the Jim Crow Museum, these objects serve to reinforce and spread racist stereotypes and ideology:

Blacks have been portrayed in popular culture as pitiable exotics, cannibalistic savages, hypersexual deviants, childlike buffoons, obedient servants, self-loathing victims, and menaces to society. These anti-black depictions were routinely manifested in or on material objects: ashtrays, drinking glasses, banks, games, fishing lures, detergent boxes, and other everyday items. These objects, with racist representations, both reflected and shaped attitudes towards African Americans. Robbin Henderson, director of the Berkeley Art Center, said, “derogatory imagery enables people to absorb stereotypes; which in turn allows them to ignore and condone injustice, discrimination, segregation, and racism.” She was right. Racist imagery is propaganda and that propaganda was used to support Jim Crow laws and customs.

Lenore Zann, the MP for Cumberland-Colchester, worked to identify the property and to have the figure removed. According to a public post by Zann, the owners of the property immediately removed the effigy. 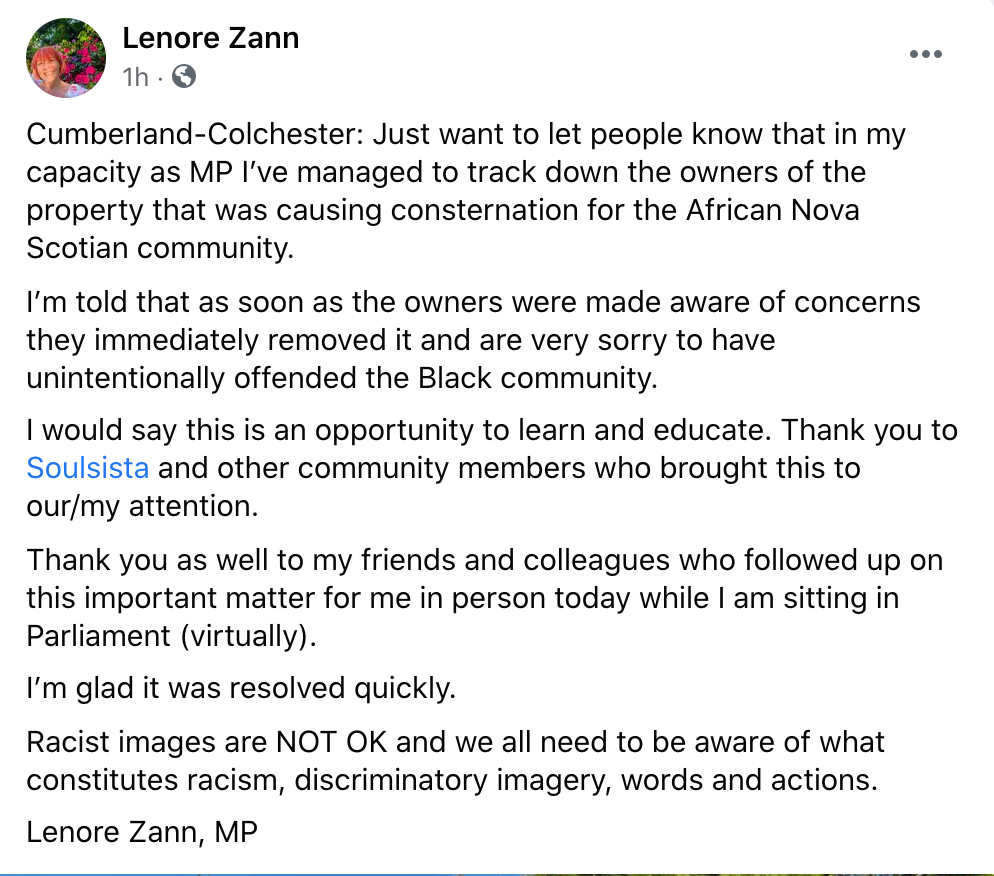 While the figure has been taken down, that it was put up at all yet again demonstrates how ingrained racist imagery is in the fabric of this province. It is a curious reality of this imagery that it is at once so common as for people to feel comfortable displaying these kinds of figures without it seeming strange to them, but yet also possible for people to deny they understand the meaning and history. Racism is so normalized that it is everywhere and nowhere at the same time: a figure like this can exist because anti-Blackness is so present that it can be unnoticed.

Lynn Jones, a community activist born and raised in Truro, says that while she is glad the figure was swiftly removed, the incident shows that

I am from the same county where this image was located. In Truro, I have been involved with other African Nova Scotian residents in advocating with the city to create an action plan on anti-Black racism following an incident where I was racially profiled while watching deer. And a couple of years before that, I was part of a coalition against the confederate flag that formed after I saw a truck in Truro covered in that racist symbol. So this figure reminds us yet again that these symbols and the racist history they represent have not gone away. We must also recognize that these images are not just symbols: they reflect the very real and ongoing ways African Nova Scotians continue to experience anti-Blackness, whether from police, from politicians, in our schools, in health care, in housing — everywhere. As long as there is imagery that shows us as inferior, we will continue to be treated as less-than, and as long as we are treated as inferior, these images will continue to circulate.

What more can I say about racism in this province that hasn’t been said so often for so many generations? These same issues come up again and again, and we protest and write and complain and explain, and then here we are again. It yet again indicates that we need to get serious about addressing these issues. We do not need more token statement, we need action.