You are here: Home / Commentary / Black people already struggle to breathe in Canada. Ignoring us during this COVID-19 crisis will only make it worse.

Black women are concentrated in frontline health care work. The agricultural industry employs large numbers of Black migrant workers who are affected by border closures. New State of Emergency declarations raise concerns about the intensification of racial profiling directed at Black communities. Black people make up a disproportionate amount of precarious workers, people in the gig economy, and home businesses such as hairdressing. Prisons, known as an epicenter of infections, disproportionately incarcerate Black people. The socio-economic impact of health means that COVID-19 will have a serious impact on Black communities and seniors.

So why are Black people largely absent from the way we talk about COVID-19?

In Thursday’s press conference, as he often does, Premier McNeil displayed pictures on the screen behind him. The photos showed how people are “making the best of staying at home.” There was not a single visible Black face. 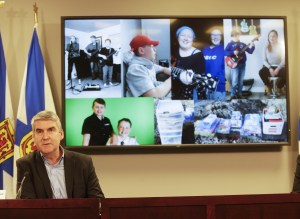 The point is not about the random photos chosen in a press conference. It is about the way the COVID landscape is imagined easily as white, and white experience is imagined as universal. The casual absence of Blackness represents a deeper problem: Black people, families, and communities are largely invisible in coverage, never addressed by name even when issues directly affect Black communities.

Racism and structural inequality shape who is affected by this illness and its economic fallout. Systematically ignoring that reality makes Black people even more vulnerable.

Beverley Bain, a professor in Women and Gender Studies at the University of Toronto, notes that the absence of Black people from Canada’s COVID coverage reflects the ongoing erasure of Black presence in Canada:

What are we to make of the disappearance of Blackness from all of the reporting of Corvid-19. Blackness seem to have been erased from the Canadian landscape in the repetitive “stay at home” narrative. Our faces are not seen in the daily news, we are not asked how our families are coping, even though it is well known that many Black people are on the front-lines as health care providers in numerous capacities, as cashiers and cleaners in fact more exposed to the virus. In addition to the realities of homelessness, Black people face evictions and lack of income support of any kind.

Yet the increased deployment of police surveillance buttressed by a snitch line, harsh fines and other punitive legal enforcement methods issued across the country, will particularly target Black bodies.

Canada is not keeping race-based data on testing or infection rates. America is not keeping that data either, and as Ibram X. Kendi wrote in an article in The Atlantic called “Why Don’t We Know Who the Coronavirus Victims Are?“:

In Nova Scotia’s press conferences, for example, concern has been raised by Dr. Robert Strang and Premier McNeil about the access to health care in rural communities. But what about rural Black communities? These communities already face the adverse health effects of environmental racism, the stripping of resources from the community, and generations of inequality. Many rural communities are mostly senior populations as young people have moved away to seek work. Activist Louise Delisle describes the health crisis that already exists in communities like Shelburne:

Delisle believes the community’s history with cancer, disease and death are connected to the dumping ground for industrial and sometimes even medical waste just around the corner.

“The majority of the black men in the community have died from cancer,” she says.

“There’s a community of widows in Shelburne. That’s what it is.”

It is not enough to assume that Black communities are simply included by default when we talk about rural communities, or that Black seniors are also the subject if we talk about care homes. Officials need to name and understand the specific cultural and economic contexts of Black communities, our family structures, how we get and share information, or our historical relationship with authorities like doctors and police in order to be able to reach us.

We know that race and poverty negatively affect health, and that Black people have poorer health outcomes. We have many stories of racist treatment in the health system. Many African Nova Scotians do not feel welcome in the health care system. We cannot pretend that it is always the case that all patients and all symptoms are treated the same. One study showed:

40% of first- and second-year medical students endorsed the belief that “black people’s skin is thicker than white people’s.”

What’s more, false ideas about black peoples’ experience of pain can lead to worrisome treatment disparities. In the 2016 study, for example, trainees who believed that black people are not as sensitive to pain as white people were less likely to treat black people’s pain appropriately.

Black communities have long memories, and remember how previous disasters like the Halifax Explosion excluded Black homes from recovery efforts. Black people know we have always been erased and always are treated as second class. When we are not mentioned, the silence sends a message.

State of Emergency measures have been introduced across Canada as though enforcement, punishment, and safety are equally granted and applied to all. But as academics and activists have repeatedly argued, policing is always targeted at Black people. Desmond Cole quickly identified how in Ontario, as in Nova Scotia, directives that make it compulsory to give police information simply bring back carding and street checks. Law enforcement is never race-neutral. Black people know that we are always the collateral damage in calls for “protection.”

"Failing to correctly identify oneself carries a fine of $750 for failure to comply with an order made under the EMCPA or $1,000"

white people hanging out at bellwoods or the lakeshore today know this isn't for them—carding never has been. this order is perilous for black folks pic.twitter.com/EubHPqTqJG

The erasure of Blackness is one way that anti-Blackness operates. Laws and policies are targeted at or disproportionately affect Black people, yet the pretence is that Black people simply don’t exist.

On The Current on Thursday, Halifax Chief of Police Dan Kinsella was questioned about enforcement during the pandemic, yet despite his own recent apology for street checks, he did not even mention Black people. If the police have not even considered how these new policies fit with the ban on street checks, then we certainly cannot expect racism and racial profiling to magically disappear from our interactions with police just because there is a crisis.

The violence of this interview–when the specificity of the Black comes in, the violence of comes to the fore. It is all enforcement; all pathologizing; no understanding.

Canada also does not keep the statistics on race and immigration detention. Black detainees led the hunger strike at the Immigration Monitoring Centre in Laval, demanding release as the threat of COVID-19 infection spread to the facility. Border closures and restrictions affect Black refugees and migrants, yet again, the issue is treated as race-neutral.

Am so glad to (re) share that the 8-day hunger strike undertaken by migrant detainees at the Laval Immigration Holding Centre was partly successful: they were released! Hear thx for your support from a former hunger striker right here (ENG at 30 s) https://t.co/4fkJPWhWSY /1 pic.twitter.com/7FwkoMrlrd

Nova Scotia has declared farm workers to be essential, yet large amounts of the agricultural sector in Nova Scotia are sustained by temporary workers, including many Black workers. We have heard nothing from the province specifically on how the new border restrictions affect Black workers and what this will mean for those workers in future seasons.

We have certainly heard no consideration of families in Jamaica and elsewhere who are dependent on seasonal income and who are now left with no benefits, no guarantees, and no rights to any support from the province or from Canada. Canada takes their labour and says we owe them nothing.

Black women are concentrated in nursing, in homecare, and as caregivers for families. This places them at higher risk of infection. Black people overwhelmingly work in the gig economy, running home businesses like hairdressing and daycares, and in jobs like day construction. In many Black communities, the majority of the community may work in these kinds of jobs. The province has not mentioned specific plans to target economic relief at these communities that are already under-resourced and less serviced.

Many Black communities were barely surviving before, targeted by gentrification, loss of land title, and migration out. It is a real possibility that COVID-19 could strangle African Nova Scotian communities that have already been left to die.

We are hearing the rhetoric that COVID-19 does not discriminate, and that everyone is equally at risk. While the virus may not discriminate, human systems do. Everyone infected does not have the same resources, and not everyone will be affected equally. We have seen in this time how inequality has deepened. One class of people goes to work on the frontlines largely in low-paid service jobs, while another, richer, class of people gets to sit home. Race widens those gaps. In the words of human rights lawyer Anthony Morgan:

Too routinely, Black bodies are unjustly surveilled, intercepted and snuffed out by police in the Great White North. Not only is anti-Black racism real here, but it is forcefully denied when you try to point it out.  As such, there exists a double burden of anti-Blackness in this country. This is what I call the suffocating experience of being Black in Canada.

Black people already struggle to breathe in Canada. Ignoring us during this COVID-19 crisis will only make it worse.