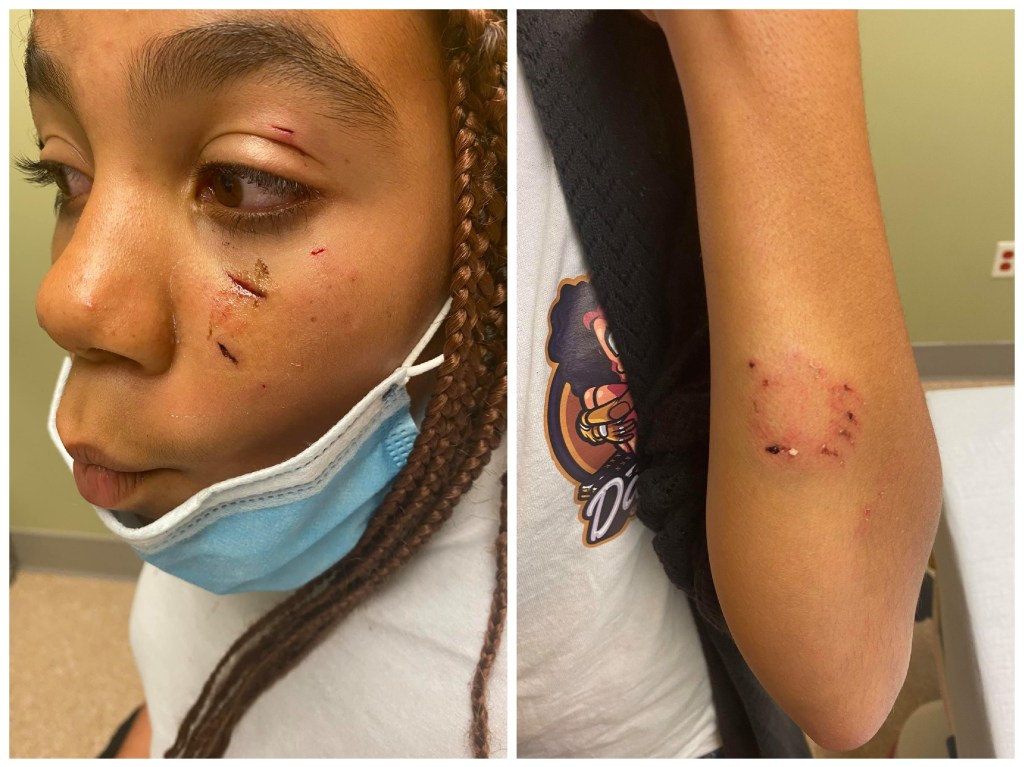 On Saturday, Sept. 11, 12-year-old Taizanah’zian Fletcher was bitten in the face and forearm by a neighbour’s dog outside of her house in the Greystone area of Spryfield.

Last Thursday, Taizanah’zian’s mother, Francisca Fletcher, spoke with the Examiner about the incident. Fletcher said that not only was the dog supposed to be muzzled, but that the Halifax Regional Police officer in charge of the investigation, Jeffrey Foster, still hadn’t taken an official statement from Taizanah’zian and other witnesses, despite speaking to the dog’s owners.

“The cop still hasn’t gone to question the kids that I told him were witnesses to the situation,” Francisca Fletcher said. “Like the girl’s family did not witness the situation.”

“If my dog bit [someone], there would be no runaround. All the white people would have come for me to make sure my dog was removed.”

Since we spoke last, Fletcher said a different police officer came by to take a statement. She said that the officer didn’t agree with Foster’s handling of the incident. 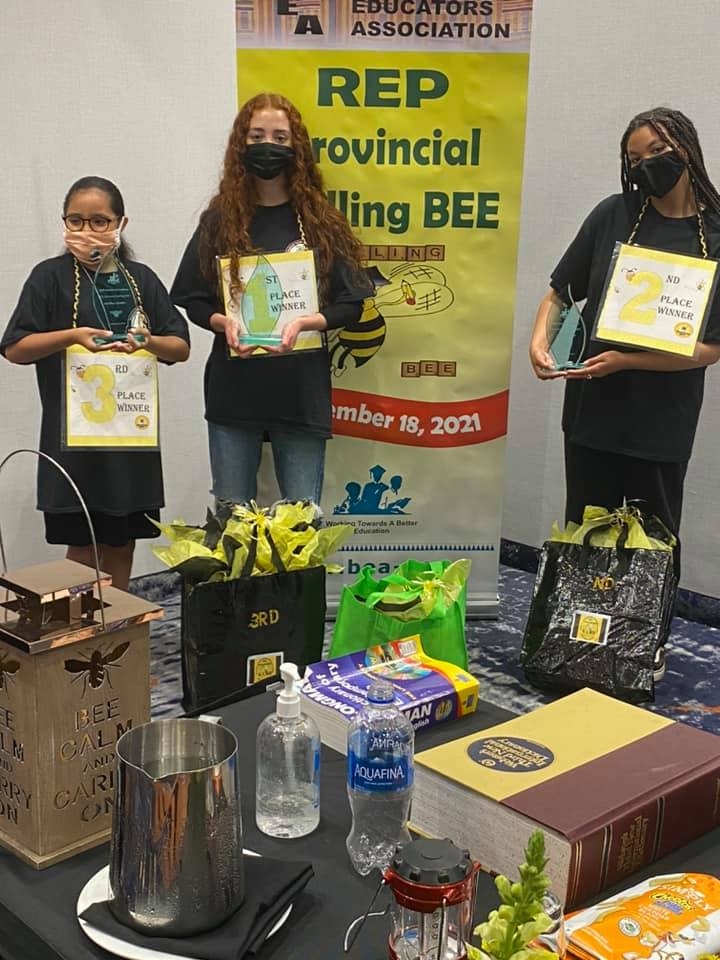 Though there are usually more than 100 participants, this year’s numbers were reduced due to COVID-19 restrictions. The participants range from age eight to 16. The majority of participants are in the Black Educators Association’s Cultural Academic Enrichment Programs, but anyone can enter as long as they register and are in school in Nova Scotia. The spelling bee is rooted in teaching the importance of standard English language and basic literacy skills.

I was told the most important elements of the spelling bee are building confidence in the participants by standing in front of an audience and the opportunity to meet kids from Black communities across the province. The BEA is in the process of developing a public speaking program they hope will allow students to continue to build on their written and oral communication skills. 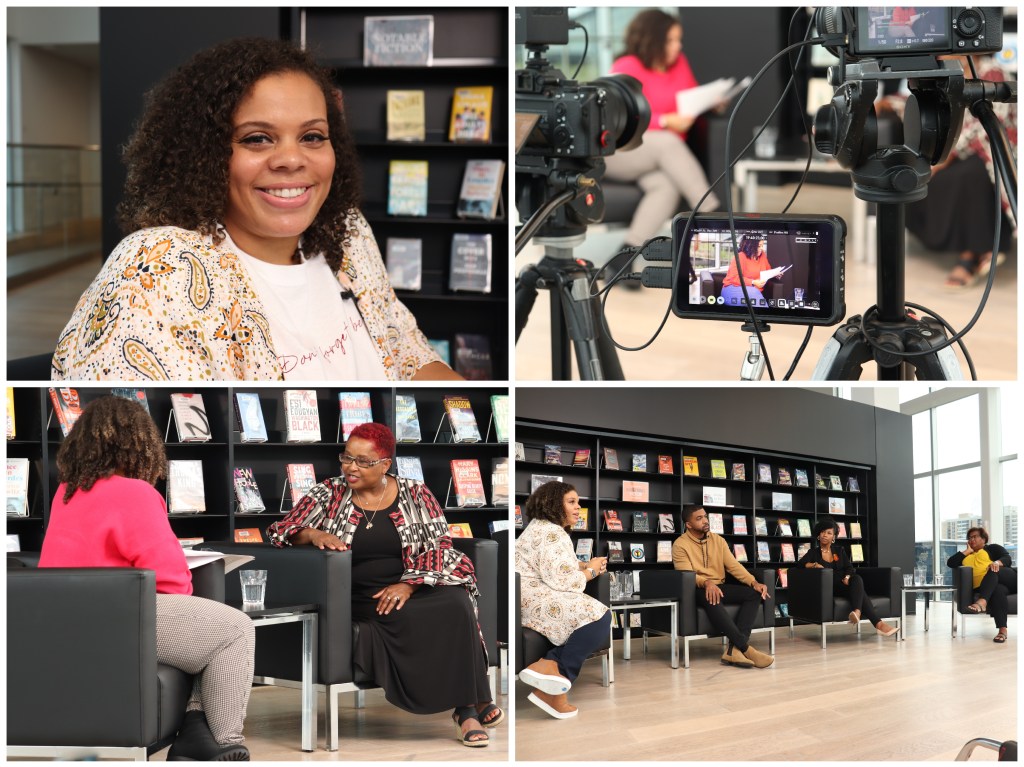 Willis said the talk show series is an African Heritage Month project that was delayed because of COVID-19.

“I put in a proposal that we have a dialogue, conversation series, four episodes about different issues impacting the African Nova Scotian community,” Willis said. “We’re talking about racial trauma, grief and loss, collective healing and wellness, and community development. I have two to three guests on every show, we talk about these topics. Each episode is specific to one of the topics, they’re meant to build upon each other.”

The four-episode series will be aired in February during African Heritage Month. 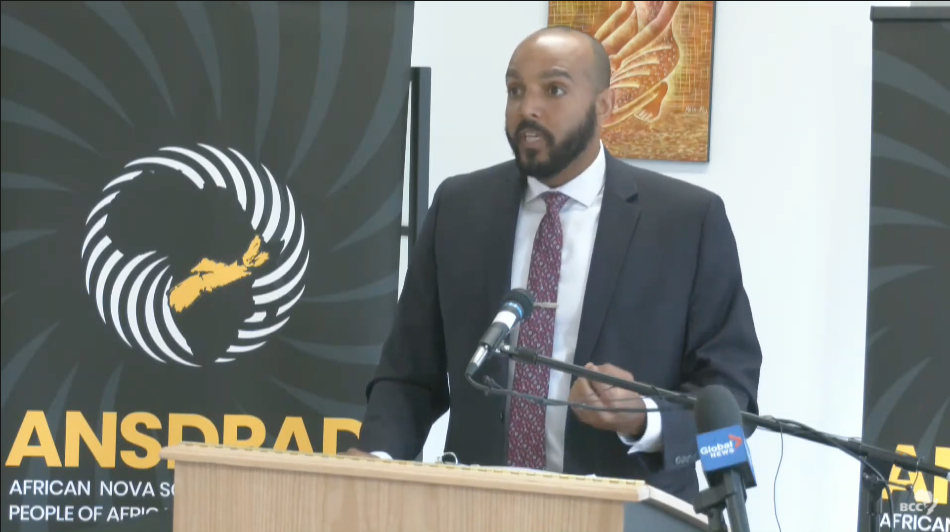 After speaking at a news conference last month about a decision by the Nova Scotia Court of Appeals that makes Impact of Race and Culture Assessments (IRCAs) mandatory when sentencing Black people in Nova Scotia, Brandon Rolle spoke with The Examiner to shed more light on the landmark decision.

Rolle, who is a Nova Scotia Legal Aid lawyer, argued on behalf of the African Nova Scotia Decade for People of African Descent Coalition (ANSDPADC) in defense of the use of IRCAs following the Crown appealing a house arrest sentence of a young Black man convicted for having a loaded handgun.

Though the decision was heralded as a progressive step towards racial justice in the province, Rolle says there’s still more work to be done.

For me, this is only part of the solution because at the sentencing stage, obviously, we’re talking about a point in the process where the person’s already been convicted. They may have encountered systemic racism all throughout the process from the very front end when they encounter police officers, and then the charges are laid, and then how the prosecution’s handled, and then evidence throughout the trial. There are a lot of opportunities to be exposed to systemic racism before sentencing.

I think there’s a lot of work to do when we think about things like how police interact with our community members, with how Crown attorneys make decisions about whether or not to lay charges or whether to refer something to restorative justice or how we select juries that are gonna be free of racial bias — how do we ensure that?

I think the Crown attorney’s office has a huge role to play, and so being able to think about how we address systemic racism within that institution will be a big factor. And then, of course, outside of justice, we know that we need multiple solutions within health, economics, education. 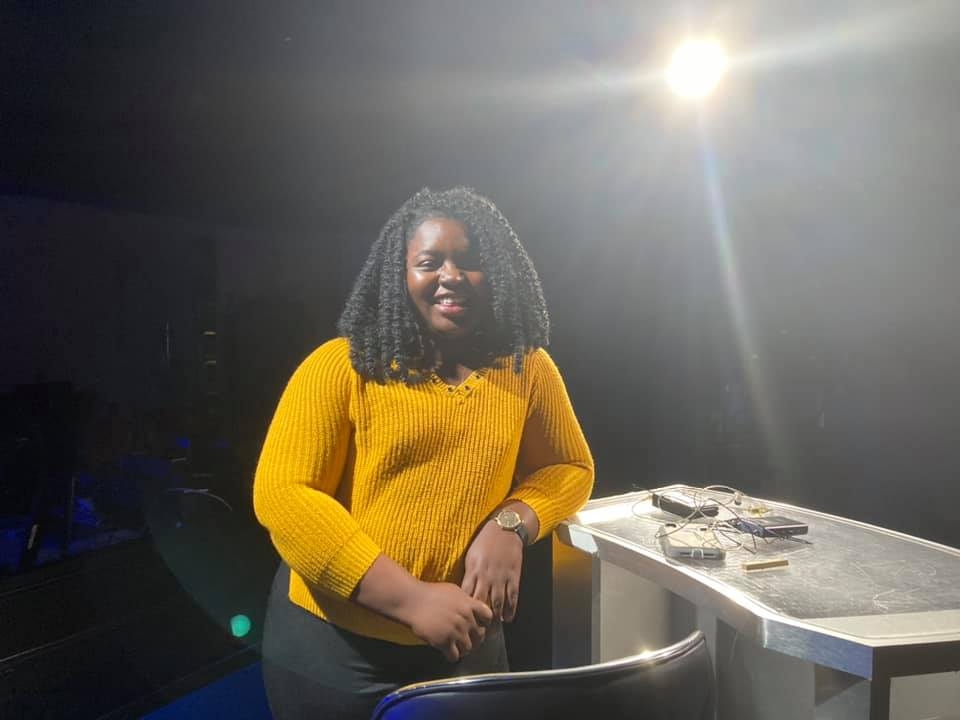 Juliet Mawusi is the producer of Being Black in the Nova Scotian Music Industry, starring Reeny Smith. Photo: Matthew Byard.

Being Black in the Nova Scotian Music Industry highlights North Preston singer/songwriter Reeny Smith as she and her family share her experience as a musician, and some of the obstacles they feel Black Nova Scotian music artists face. Smith’s music career started at St. Thomas Baptist Church in North Preston where her grandfather and former Gospel Heir member, Wallace Smith, is the pastor. The film’s producer, Juliet Mawusi, is originally from Ghana. She is a 2021 graduate of the Radio Television Journalism program at NSCC, where Being Black in the Nova Scotian Music Industry served as one of her major projects.

Freedom Swell chronicle’s the film’s writer, LaMeia Reddick’s involvement in the North Preston Surf program. It’s described as a film that “explores the lack of diversity in the east coast surf scene, stemming from complex, historical barriers such as racism, segregated beaches, and generational fear of water.” The community of North Preston sits next to Lake Major, which is off-limits for commercial use.

In the trailer, a senior resident of North Preston describes a fear amongst some residents that dates back to a friend drowning in the lake in their youth. In addition to the film festival, Freedom Swell is set to begin streaming n CBC Gem on Sept. 25.

Kreations is a short documentary about Kemmy Smith, an immigrant from the Bahamas who moved to Halifax in 2012 to study at the Nova Scotia College of Art and Design in Halifax. After graduating, Smith worked as a barber and designed sneakers as a hobby. One day, Ta’Quan Zimmerman who played for the Halifax Hurricanes basketball team met Smith when getting a haircut at the barbershop where he worked. After seeing some of the sneakers he designed, Zimmerman asked Smith for a pair and wore them in a game where they ended up going viral. That helped Smith launch his hobby into a business. Smith’s journey as an immigrant.

Kreations chronicles Smith, his daughter, and his journey as an immigrant to an entrepreneur in Halifax. 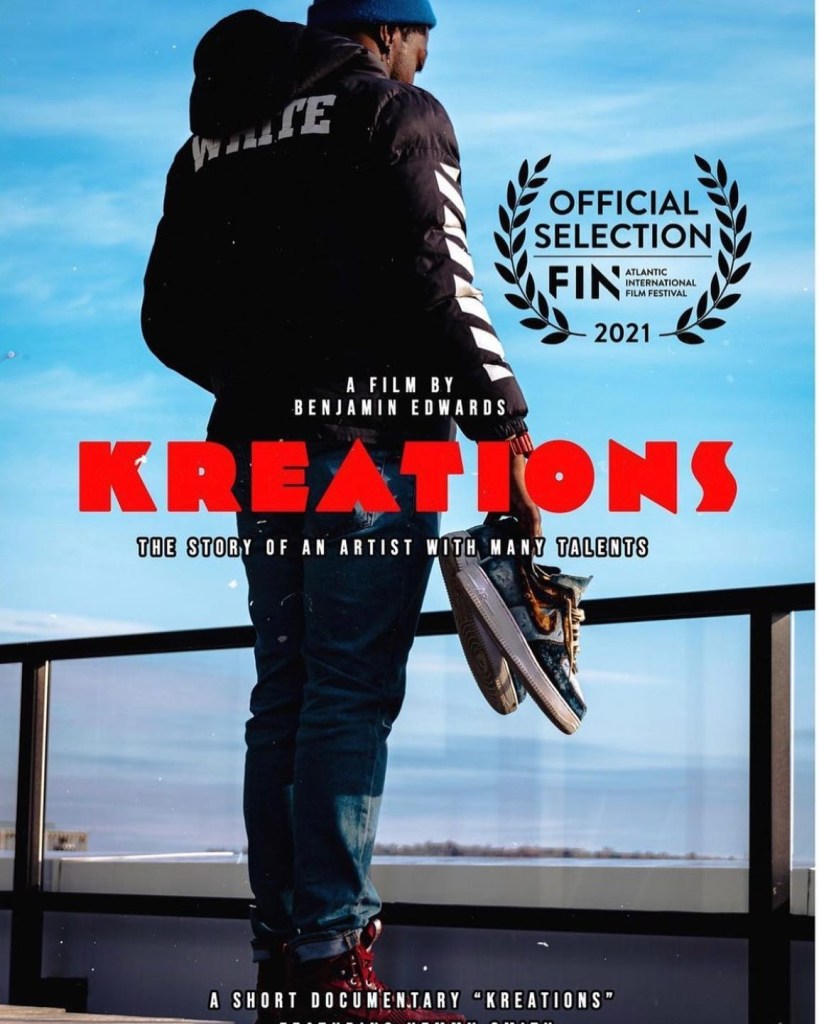 And Rocky and Joan is a film that highlights the late Burnley “Rocky” Jones, and his late former wife Joan Jones, and their involvement in the civil rights movement of the 1960s. The Joneses were involved in helping to bring members of the Black Panther Party from the United States to Halifax. This placed them and others under the watch of Canadian federal authorities such as the Canadian Security Intelligence Service (CSIS). Joan Jones and her daughter Tracey Jones-Grant both appear in the film.

In the trailer, they talk about the sad erosion of Black community ownership. “The same things we were talking about then, we can talk about now. And they still mean things,” said Joan Jones. “It makes me sad because sometimes I just think we wasted our time.” 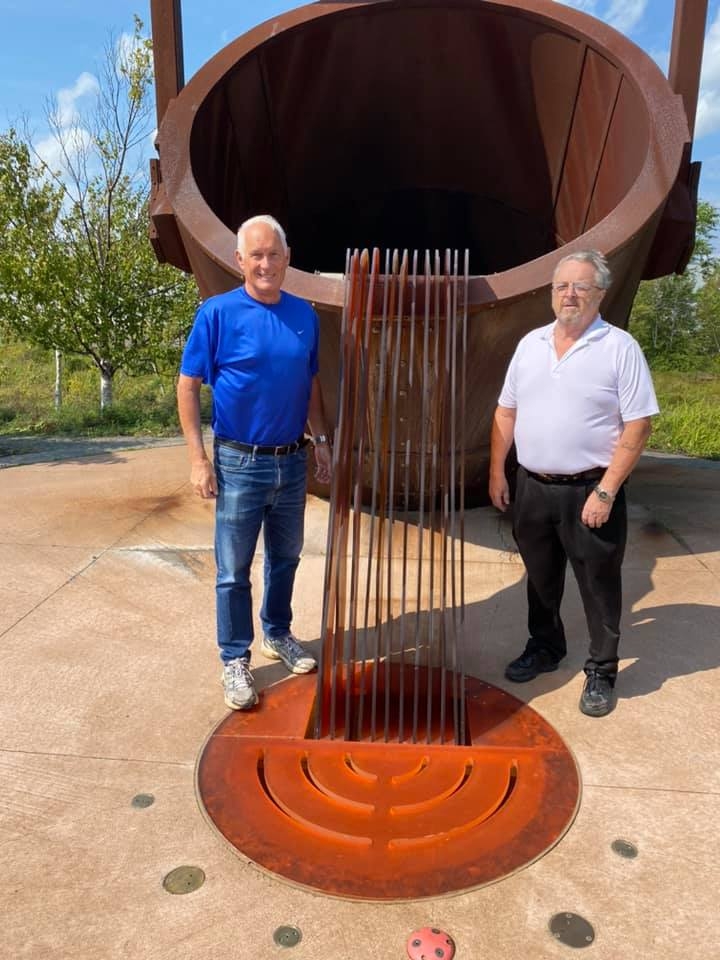 Members of Nova Scotia’s Black community met on Thursday, for the third time in recent weeks. This was the second meeting hosted by the Association of Black Social Workers, the Health Association of African Canadians, and the African United Baptist Association. Further mobilization efforts were discussed in response to the appointment of Pat Dunn to Minister of African Nova Scotian Affairs and Equity and Anti-Racism Initiatives, as well as the dismissal of Dr. Késa Munroe-Anderson, who served as deputy minister of communities, culture, and heritage, and Dr. OmiSoore Dryden from the Nova Scotia health board of directors.

Earlier in the week, the group released an open letter to Premier Tim Houston that was signed by African United Baptist Association chair Carolann Wright, the Association of Black Social Workers past-president Veronica Marsman, and the Health Association of African Canadians co-president Sharon Davis-Murdoch. The letter called for a meeting with Houston prior to the fall sitting of the legislature to which Houston has since agreed.

Former Minister of African Nova Scotian Affairs Tony Ince was recently appointed the official opposition critic to his former position. He spoke with The Examiner last week about a range of issues surrounding African Nova Scotian affairs, including a newly formed Black caucus within the legislature.

“Angela Simmonds, Ali Duale, myself, and Suzy Hansen are coming together to form a bit of a Black caucus, so to speak, coalition, and we are coming together so that we can collectively try to move any of the issues for our community together,” Ince said.