*A previous version of this story included a photo we incorrectly identified as Rae’heem Downey. That photo has been removed. We regret the error.*

Rae’heem Downey was sentenced last week in the death of Jamie Lee Bishop in 2018. According to an agreed statement of facts read at the sentencing, Bishop was armed with a knife and advanced on Downey, repeatedly calling him the N-word, before Downey opened fire. Blair Rhodes at CBC reported on the sentencing last week.

Bishop was 21 years old when a 15-year-old girl who had quarreled with him called Downey, who is now 24, to come pick her up in Eastern Passage.

Bishop and the girl were talking on the side of the road when Downey pulled up in a vehicle. Downey called out to the girl, and that’s when the altercation took place.

Downey took off and was arrested a short time later. Bishop died later in hospital.

Downey was originally charged with second-degree murder, but pleaded guilty to a lesser charge of manslaughter earlier this year. He was sentenced to 11 years in prison. Downey got credit for time already served and now has to serve another six years and nine months.

“I’m truly sorry to the family for what happened. I can’t imagine the pain that I caused you,” Downey said at his sentencing.

On social media, one commenter, who is white, said: “I feel like if cops were called by a fifteen-year-old girl seeking rescue and opened fire on the person with a knife who charged them, they wouldn’t get eleven years of anything but congratulations.”

“Focusing on the slurs makes it sound like Downey wasn’t defending himself from *a charging assailant with a knife.* Surely the racist invective is a side note to that?” 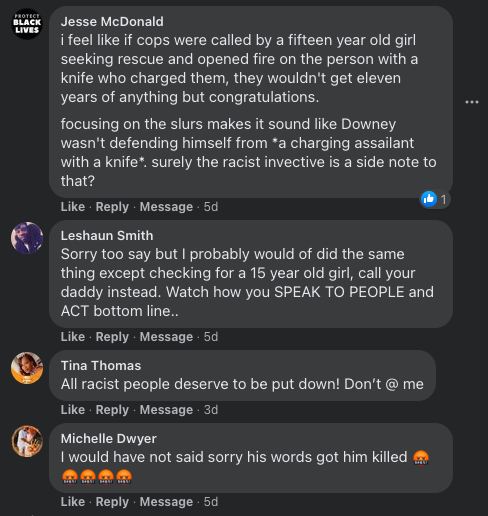 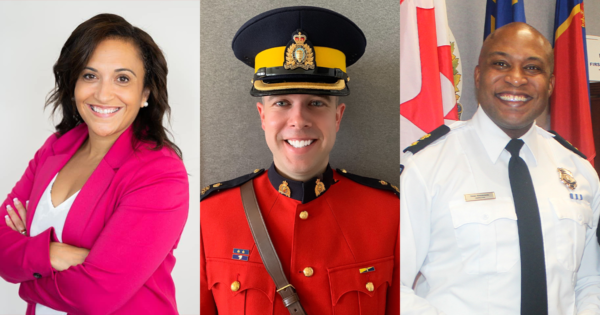 This past July, Angela Simmonds and her husband Halifax Regional Police Supt. Dean Simmonds issued a statement where they accused Cole Harbour RCMP of racial profiling while pulling them over at gunpoint and pointing carbon rifles at them.

The Examiner spoke to Angela Simmonds on August 19, two days after she was elected to the Nova Scotia Legislature.

“The reason we came forward is because it was a family decision, our children and I and Dean were bothered by this outcome,” she said about the incident. “And the fact that the RCMP seem to think that organized crime is related to tinted windows and Black men is a problem.”

When pressed for additional details about what took place, Simmonds said, “I won’t get into that because it is an ongoing investigation, and I would just say there’s inaccurate information that’s out. … So, there is an investigation but we have not been contacted for next steps of that so, I’m not sure what that will look like.”

Though over a month prior to that conversation, and while the investigation was ongoing, Insp. Jermie Landry of the Halifax District RCMP sent an e-mail to select members of Halifax city council and made specific claims about the details of the incident that contradicted those of the Simmonds.

“Unequivocally, at no time, were any firearms pointed at them,” Landry wrote, in stark contrast to the Simmonds’ claims that the RCMP pointed carbine rifles at them. 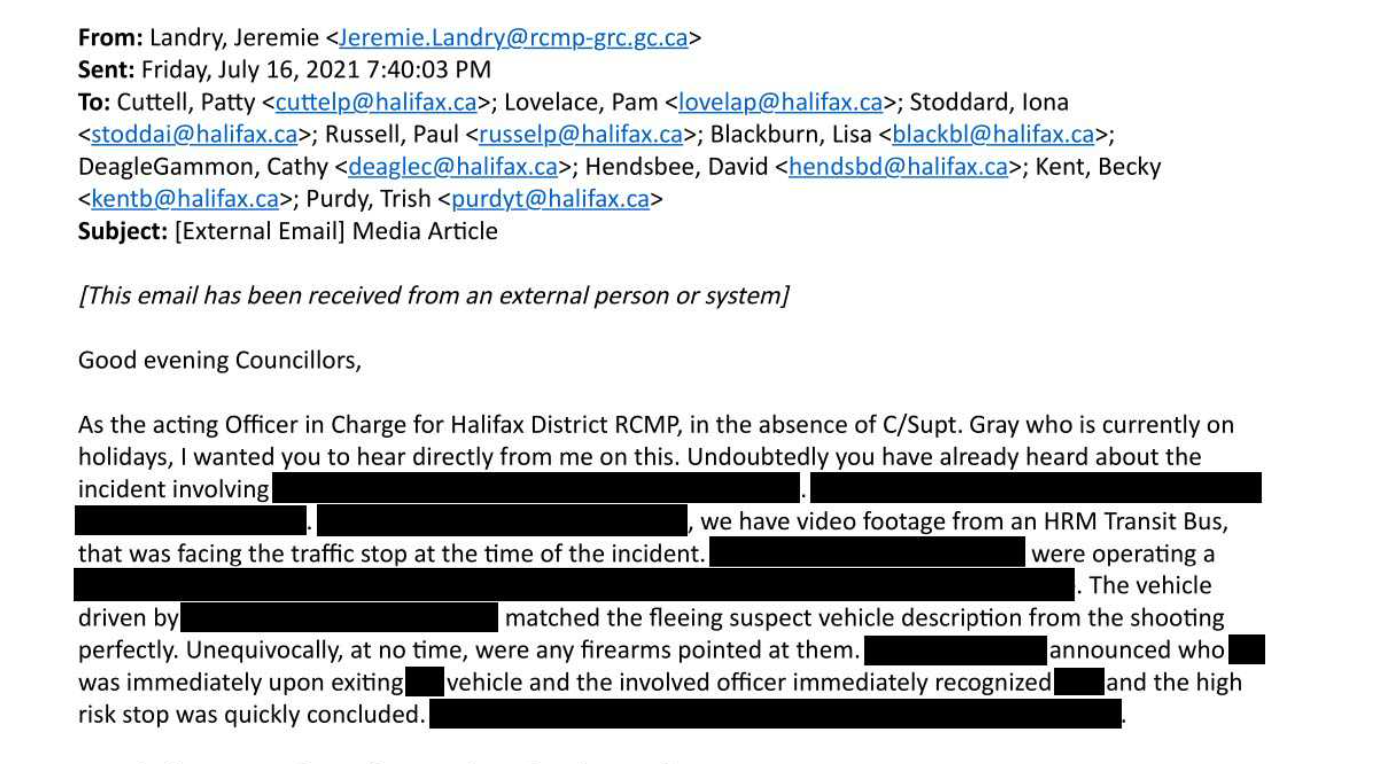 A screenshot of the email sent from Insp. Jeremie Landry to some Halifax regional councillors about the RCMP stopping Angela and Dean Simmonds’ vehicle. It was redacted by the police before being released.  Screenshot: HRM 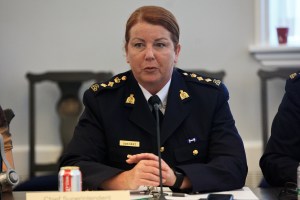 Halifax-district RCMP Chief Superintendent Janis Gray speaks at a meeting of the Halifax Board of Police Commissioners in July 2019. — Photo: Zane Woodford

When he wrote the e-mail, Landry was filling in for RCMP Chief Superintendent Janis Gray. When the letter came to light at the Board of Police Commissioners meeting two weeks ago, Gray at one point interjected: “Should this not be in camera?” meaning that discussions around the letter be kept private from the public.

In an interview, Halifax Coun. Waye Mason, who Landry did not send a copy of the letter to, but was the one who brought to to the board’s attention said:

There’s so much wrong with that. There’s an active investigation that’s so sensitive that the RCMP and the clerks have decided that it needs to be entirely redacted, but the acting commander chose to communicate to political elected officials about an active investigation, and to only do so to the people are served by RCMP in Halifax. None of that is right. 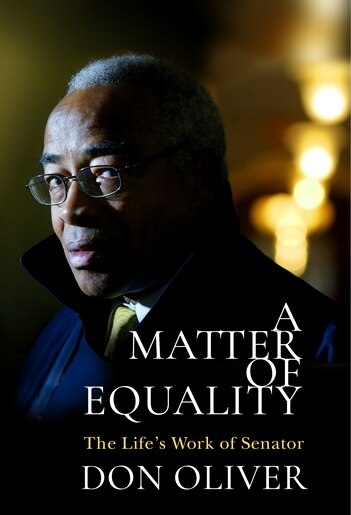 ‘A Matter of Equality: The Life’s Work of Senator Don Oliver’ was released last week.

Oliver is the brother of the late Rev. Dr. William P. Oliver who founded the Black Cultural Centre for Nova Scotia. Last week, the centre’s executive director, Russell Grosse issued a media release about the book that said:

In his book, and as he explained to me, he wanted to try to capture the essence of the apparent contradiction of being Black and maintaining that identity throughout his life, while growing up in the only Black family in an otherwise lily white University town of Wolfville, working in a white law firm, and routinely finding himself in an all white presence in business, work and play.

The Publisher, Nimbus Publishing of Halifax, said that the Senator’s “a matter of equality” is a book about a man who dedicated his life to rooting out the systemic racism that has “ stalled the growth of Canada’s Black Citizens.”

The book’s forward was written by former Conservative Prime Minister Brian Mulroney who appointed Oliver to the Senate, and Africville poet and author George Elliott Clarke.

The book is currently available for pre-order on various online platforms, including on the Black Cultural Centre’s online gift shop. 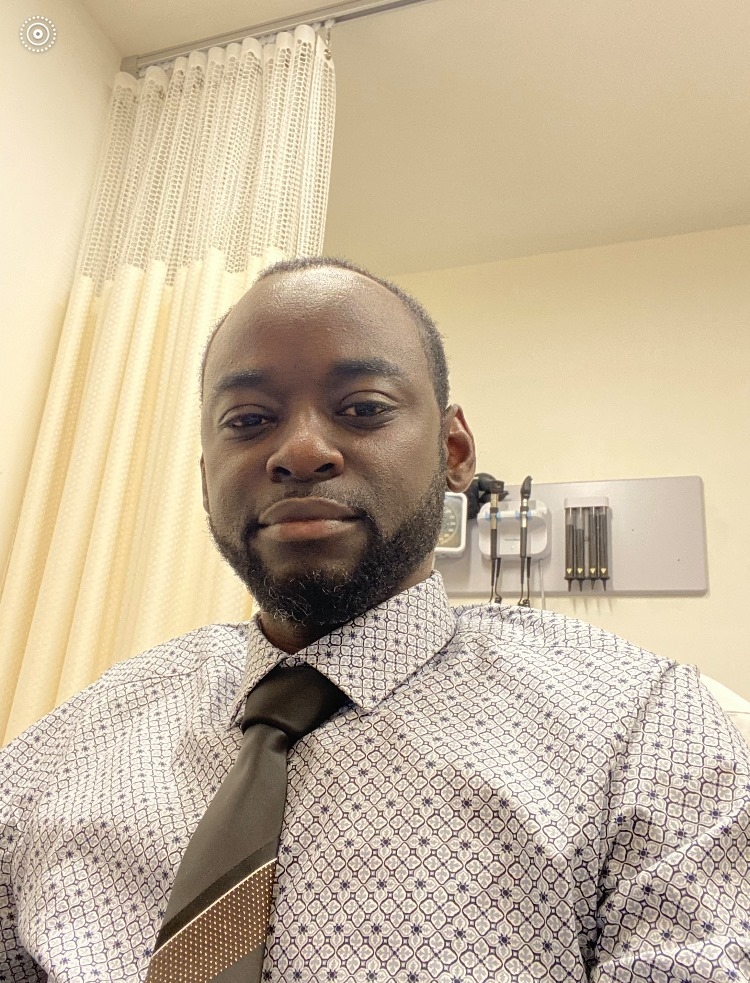 With a doctor shortage and what some call a health care crisis in the province, the town of Middleton was happy to welcome Dr. Jerry Asiedu, his wife, Ama, and their children, Adwoa and Kwabena, earlier this month.

Dr. Asiedu, who is from Ghana, began his practice with the Middleton Collaborative Practice earlier this month.

A local couple, Bonnie Morine and Bob Clattenburg surprised Asiedu’s family with new bikes for his children to welcome them and their parents to the community. 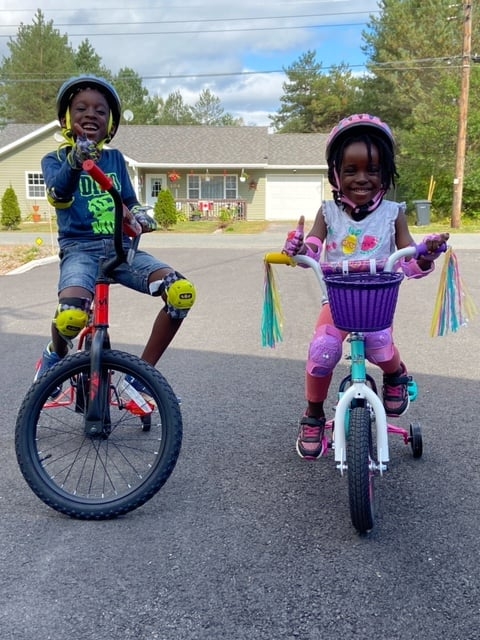 Dr. Asiedu spoke with Jason Malloy at Saltwire and said, “As a physician, it’s all you would wish for. That’s what you’re trained to do,” he said when asked about getting closer to his first day. “So, once you know, within a day or two, you’re likely to go back to doing what you love doing most, nothing could be more exciting. I am looking forward to that with a lot of excitement and happiness.”

In a Facebook post, the Middleton Collaborative Practice said Dr. Asiedu will be working as a full-service family doctor and as a staff physician at Soldiers Memorial Hospital.

5. JP Simms is ‘The Real Maritime King of the Ring’ 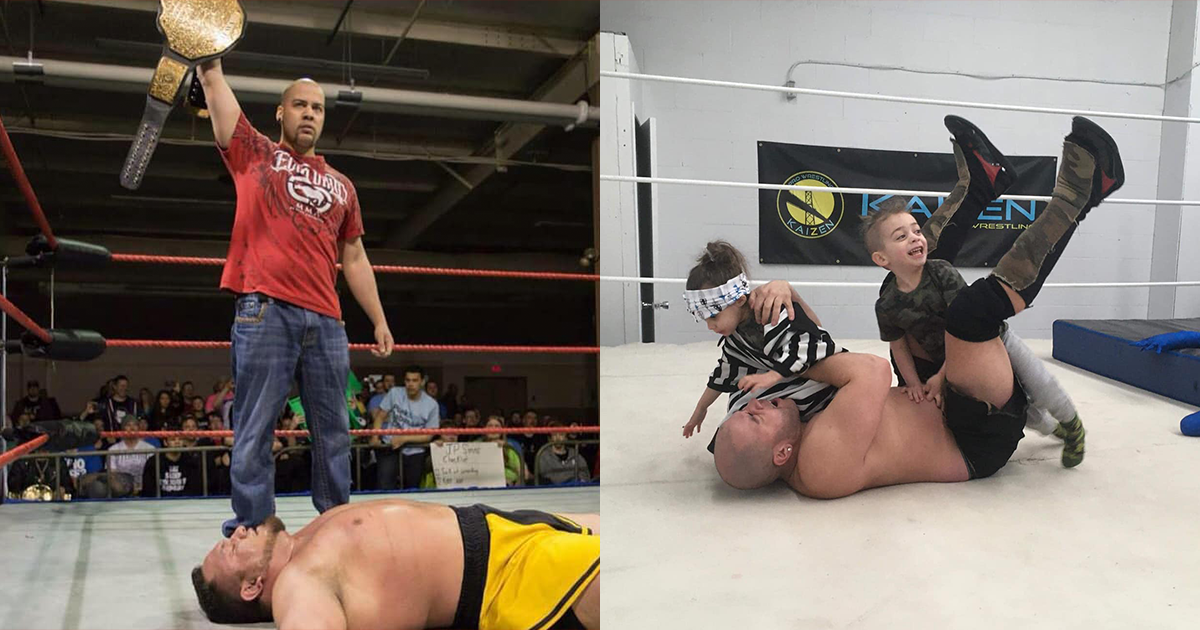 Simms, who is Black, is from Halifax and has family roots in the Black community of Hammonds Plains.

When he was 20, Simms saved up enough money to travel to Calgary for three months to train to be a wrestler under the tutelage of former WWE, WCW, and ECW wrestling star Lance Storm.

When he returned to Nova Scotia, Simms quickly found himself on the road and sharing locker rooms with many local wrestlers, wrestlers from other provinces, and wrestling legends such as Bret Hart, The Honky Tonk Man, Rikishi, and Bushwacker Luke. 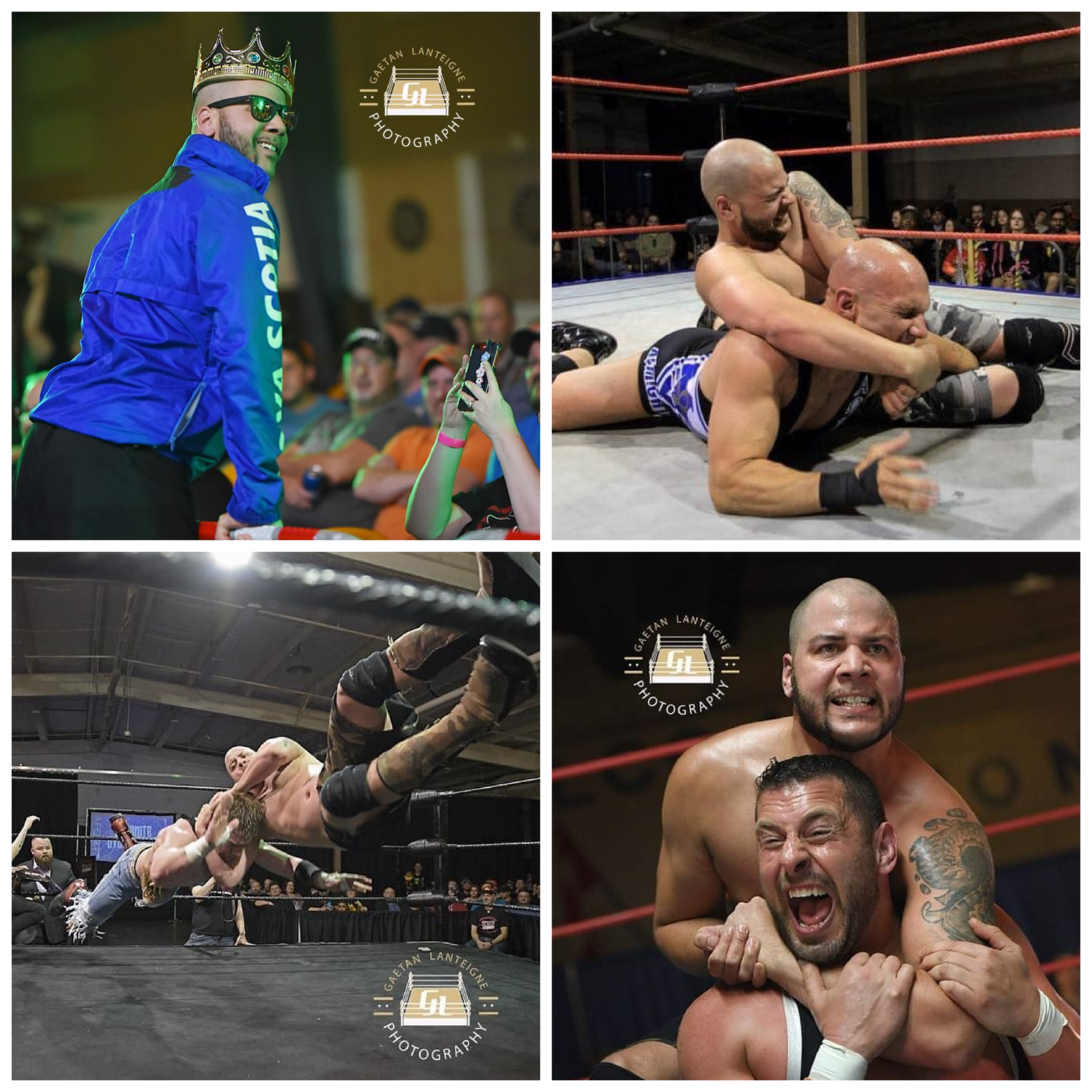 As Simms started to gain more experience as a wrestler, his experience, his training, as well as his credibility of having trained with Storm, started to create more opportunities for him with respect to perspective big-name opponents who could draw a crowd. After a 30-minute match with future WWE Heavyweight Champion AJ Styles, even more big names started coming through Halifax and the Maritimes, which created more opportunities for the local wrestling scene.

This created challenges for Simms as he says many of the local wrestlers started to resent him. Simms told the Examiner about the nature of these challenges, why he felt jealousy was involved, and an instance where he felt one wrestler made a racist remark to him that wasn’t pre-planned or part of any wrestling angle or storyline.

As time went on, and one prominent local wrestling promotion shut down, one local wrestler went on to be convicted and sentenced to prison on domestic violence charges, while many others went on to be implicated in sexual abuse and misconduct accusations by an underage teenage girl.

Simms, on the other hand, who was not welcomed in many of their circles, went on to become a father of two children, propose to his fiancée, and continues to wrestle on the Maritime wrestling scene.

‘The Real Maritime King of the ring’ tells Simms’ version of these events and also chronicles his two-out-of-three falls match this past July for the Kaizen Pro Wrestling Heavyweight Championship.

*We incorrectly stated that Donald Oliver was Canada’s first Black senator when, in fact, he is the first Black male senator. Oliver was preceded by the Honourable Anne C. Cools.