You are here: Home / Featured / Black man ticketed for jaywalking challenges Halifax police at human rights board of inquiry

A Nova Scotia Human Rights board of inquiry has heard conflicting testimony about the events leading up to a 2017 interaction described by one witness as “disturbing” and characterized by the man at the centre of the inquiry as racial discrimination.

Gyasi Symonds, a Black man, is arguing police discriminated against him based on his race in January 2017 when they ticketed him for jaywalking across Gottingen Street.

The interaction between Symonds and the police took place in front of the Nook café and across the street, inside 2131 Gottingen St., also known as the MacDonald building, where Symonds works as a provincial department of community services case worker.

As reported by the Chronicle Herald’s Noushin Ziafati, Symonds testified on Thursday that he left the office to cross the street and get a coffee at the Nook.

Symonds said he walked across Gottingen Street in the middle of the block, and although a group of white women had just done the same, police approached him alone about jaywalking. There was a discussion, and then Symonds said he got his coffee and crossed back over the street, this time in a crosswalk.

The two Halifax Regional Police officers, Constables Steve Logan and Pierre Paul Cadieux, said on Friday afternoon that Symonds jaywalked twice, and that’s why they decided to give him a ticket.

The officers — who were rookies assigned to foot patrol on Gottingen Street at the time — both said Symonds was almost hit by a van the first time he crossed the street, and they gave him a verbal warning as he went into the Nook. 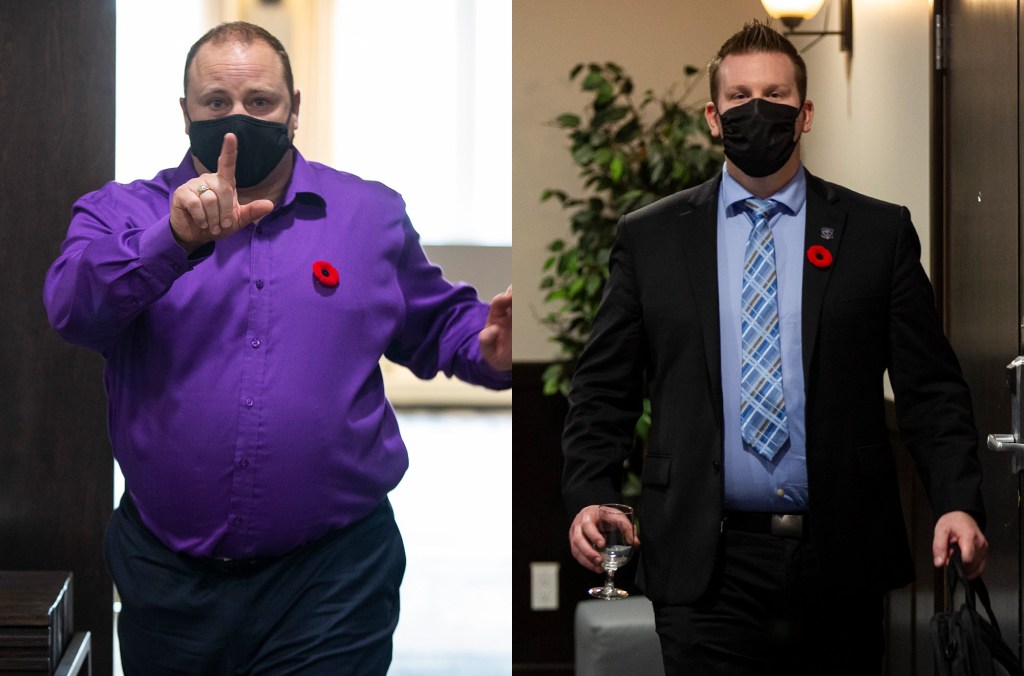 Symonds said the officers blocked him as he tried to walk into the Nook, while the officers said they tried to “educate” him while holding the door open.

Symonds then asked, “Am I under arrest or am I free to go?” before going into the Nook to get his coffee.

The officers’ stories differ slightly in what happened next: Logan said the two officers then waited for Symonds to leave the cafe, while Cadieux said they walked away.

Either way, they both said they turned around when they heard a bus screech to a halt outside the Nook, and then saw Symonds run across the street, coffee in hand.

Symonds is representing himself in the inquiry, and repeatedly challenged the officers’ version of events while they were on the witness stand all afternoon, calling them liars and racists. 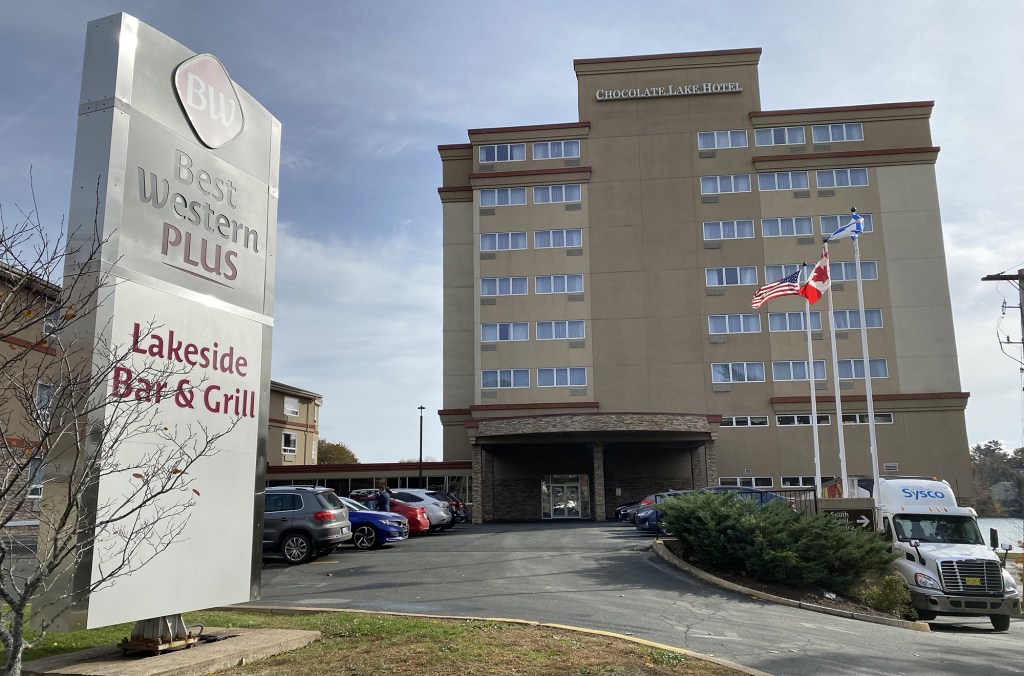 The Nova Scotia Human Rights Commission board of inquiry hearings are being held at the Chocolate Lake hotel in Armdale. — Photo: Zane Woodford

Asking Logan about the bus screeching to a halt, Symonds asked if he was aware there’s a bus stop right in front of the Nook, and whether that could’ve been why the bus stopped.

Logan disagreed, while Symonds accused him of lying about the second crossing.

“So I dodged a bus by the skin of my teeth with a steaming hot coffee, while jaywalking, is that what you’re saying?” Symonds asked. Logan said yes.

No matter how he crossed the street, Symonds went back into the office building and up to the floor he worked on. Minutes later, the police came into the building, encountering Carolyn Brodie, the commissionaire who worked the lobby.

Brodie testified Friday morning that the two police officers told her they were looking for “a Black man wearing a toque.”

“One of them said, ‘He jaywalked and we’re trying to save his life,’” Brodie said.

The officers testified Brodie showed them the surveillance cameras from the building, and that’s how they identified Symonds as the man they were looking for. Brodie said she often shows police that surveillance footage, but she didn’t show it to Logan and Cadieux.

The officers asked Brodie to let them upstairs to find the man, but she told them the elevators were locked and she couldn’t allow them to go up to the offices. Brodie got a supervisor involved, and eventually the supervisor paged Symonds upstairs and he came down to the lobby.

During that interaction, Brodie testified, the officers were “challenging” Symonds. One of them had his hand either on or near his weapon, she said.

“And I thought, ‘Oh my goodness, are they going to hurt him?’”

The officers testified they sometimes rest their arms on their service weapons for comfort.

“They were loud. They were rude,” Brodie said.

One of the managers in Symonds’ officer testified Friday morning, too. Tracy Embrett told the board she pulled Symonds aside from his cubicle and into a private room to tell him the police were downstairs.

Embrett said she was trying to be cognizant of Symonds’ privacy as she pulled him aside, but others in the office would have noticed him being pulled aside by a manager and that could have “created some churn among people in the office, some gossip.”

She told Symonds it would be best if he went downstairs and talked to the police. He did so, and Embrett walked by during their interaction.

Symonds looked uncomfortable and he was “sweating profusely,” Embrett testified.

Brodie said the incident was “disturbing,” and it left her “shaken.”

After the interaction, which lasted between 30 and 45 minutes, Brodie said, the officers wrote Symonds a ticket.

“I thought the whole thing was extreme if you want my personal opinion,” Brodie said.

“I did not understand the behaviour of the police officers at all.”

The officers said the interaction was faster — 10-12 minutes, according to Cadieux.

And it was Symonds being loud and rude, not them, Logan said.

The officers said Symonds originally refused to give them identification to write the ticket. He eventually went upstairs to get it, and came back downstairs and started filming the officers with his phone.

“He was upset, I think for obvious reason,” Cadieux said. “Nobody likes to receive a summary offence ticket.”

Cadieux — who was arrested and charged with sexual assault in 2018 before the Crown determined “a realistic prospect of conviction no longer existed” and stayed the case — said Symonds’ was the first ticket he’d ever written for jaywalking. The second was handed to a pedestrian who’d been hit by a car.

“I’m the first person you ever gave a jaywalking ticket to, and I happened to be a Black man? Amazing,” Symonds said.

After writing the ticket, Logan and Cadieux left the scene. They said Symonds didn’t contest the ticket and paid it. He filed a complaint against the officers, but not within the six months required under the Police Act — hence the Human Rights Commission hearing the case, not the police review board.

The two officers were also asked about any diversity training they’ve received. Both constables served in the Canadian Forces prior to becoming officers and said they’d received training there, then again in police training, and annually as part of their recertification.

“I don’t believe that there are [issues], but that’s just my opinion,” he said.

Douglas asked if he was aware of the Wortley report.

“I heard about it. It’s all about our street checks,” Logan said. “I didn’t read it or anything like that.”

Douglas asked Logan whether he was aware of the key finding of the report — that Black people are six times more likely to be street checked than white people.

Logan said he was, but he wasn’t surprised, “Because a lot of our clientele is Black.”

The hearing continues on Tuesday morning, with Cadieux still on the stand.