You are here: Home / Featured / Bill Casey: the shooting of the Onslow fire hall reflects a broader RCMP communications failure 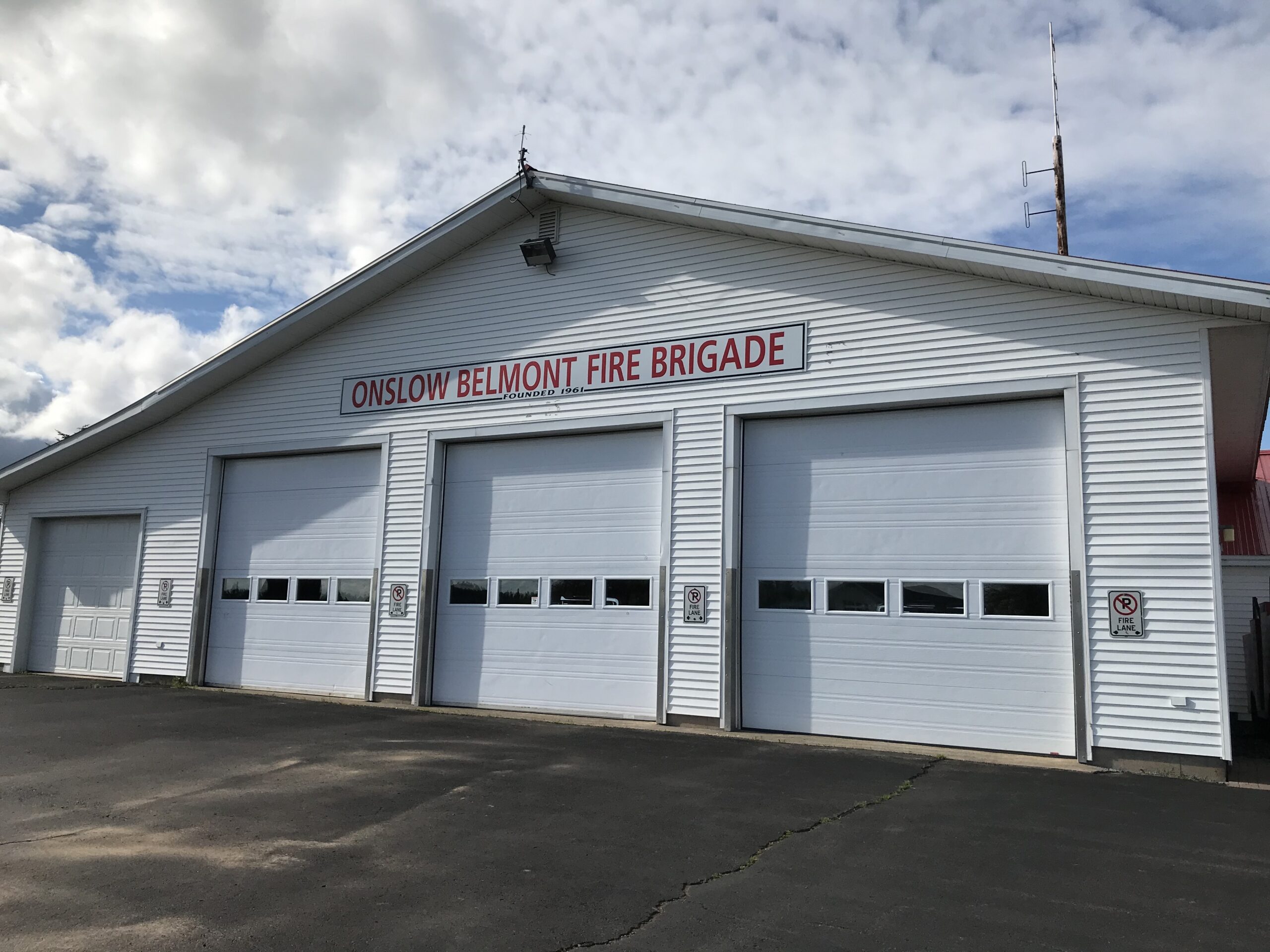 The RCMP will pay for damages to the Onslow-Belmont Fire Hall. Two of the force’s officers fired dozens of shots that struck the building during the manhunt for the mass murderer who killed 22 people in April.

Luckily, none of the three Belmont firefighters inside the fire hall were injured. Neither were an EMO official nor a Pictou County RCMP officer whose police vehicle was parked beside the hall. The five people were having an urgent conversation about how to prepare for the expected arrival of evacuees from the Portapique area, where a gunman (GW) had shot multiple people and set fire to homes and vehicles 12 hours earlier.

Corporal Lisa Croteau is a communications officer with the Halifax District RCMP. Croteau confirms damages will be covered and that two unidentified officers have been re-assigned to administrative duties pending the outcome of the Onslow shooting by the Serious Incident Response Team (SIRT). Croteau would not confirm if those police officers are members of the Halifax RCMP detachment; she referred that question to SIRT. A SIRT spokesperson says it will be at least another week before any information is forthcoming about that investigation. 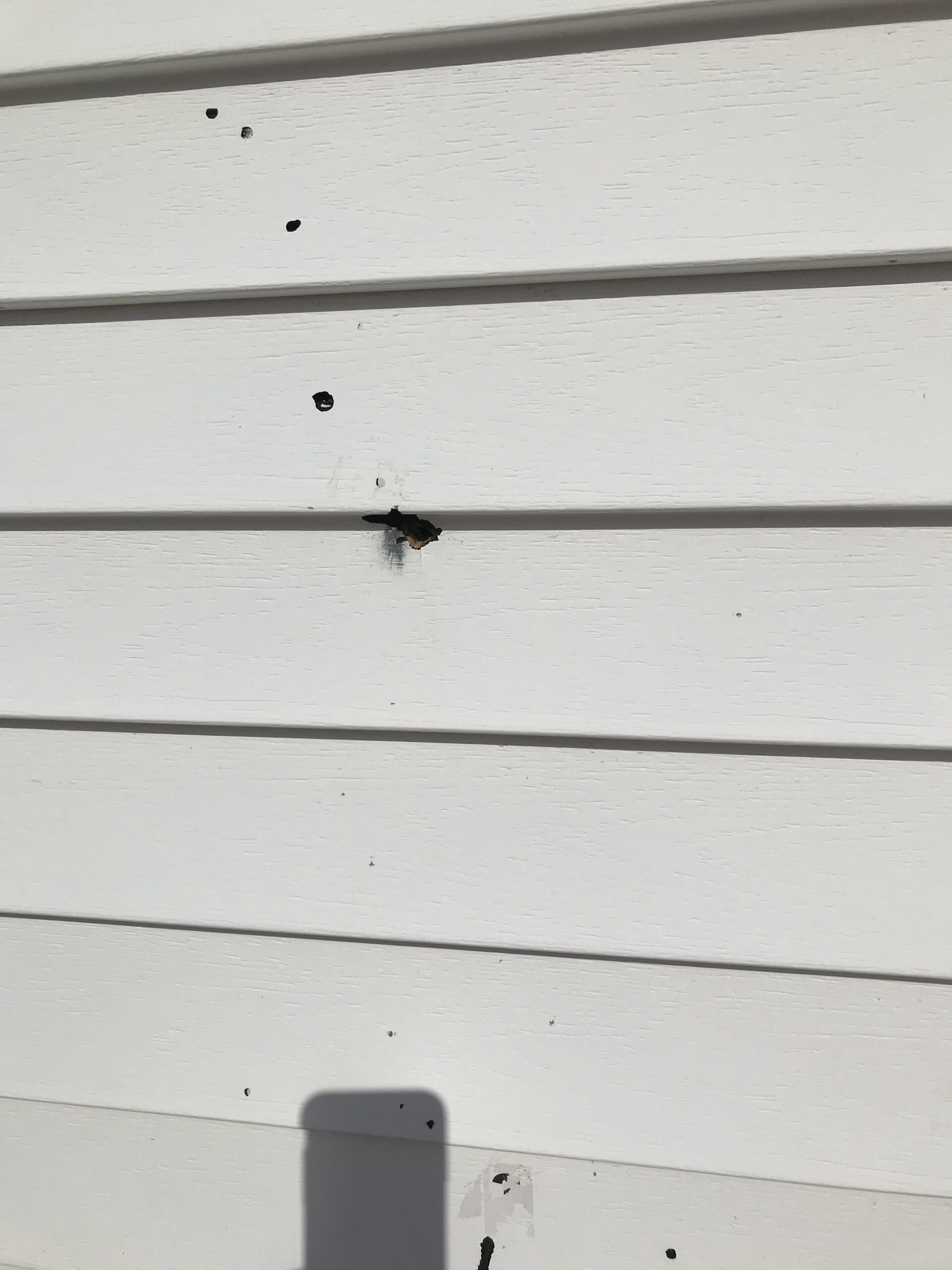 SIRT has taken statements from two eyewitnesses who live near the fire hall and described police behaviour as, “shoot first, ask questions later.” On Facebook, Sharon Shipley-McLellan posted what she saw at about 10:30 am, Sunday, April 19, when a vehicle stopped suddenly on the road:

2 men jumped out, ran towards the firehall. One went in the ditch the other hid behind the garbage bin and opened fire. The EMO {civilian} ran inside the firehall and the police officer hid behind his car waving his hands hollering at them not to shoot. Turns out it was 2 police officers in the Hyundai. One of them went around the firehall. The other went inside for a split second then they both walked towards their car and left. I live directly across from the firehall and watched the whole thing. I thought the shooter was in my front yard! I have since heard from someone who was in the firehall that the officer didn’t even ask if they were OK.

It was only 15 minutes earlier — 10:17 am — when the RCMP had sent out a Tweet alerting officers and the public that an armed and dangerous gunman was believed to be driving a lookalike RCMP vehicle headed south toward Halifax. This was the first reference to a police car, although earlier Tweets had been issued shortly after 8am and just before 10am indicating there was an “active shooter” at large in the Glenholme area, not far from the fire hall. A timeline provided by the RCMP a week later showed the killer was further south in Truro by the time officers pulled up to the fire hall.

It’s probable the gunfire at the fire hall resulted from a case of “mistaken identity,” if the officers believed the parked RCMP vehicle matched the one belonging to the murderer on the run. That speculation and other questions will be addressed by the SIRT investigation.

A failure to communicate

Meanwhile, former Colchester-Cumberland Member of Parliament Bill Casey wonders if there is “a double standard” at play. “If you or I drove up to a fire hall and shot into it, there wouldn’t be a call for an inquiry, there would be an arrest,” said Casey. “In this situation, where the shooter was driving all over northern Nova Scotia, communications failed. No alert was provided the public. With those two officers in Onslow who were shooting up the fire hall, there should have been some way to find out if the bad guy was there or not. If they had had good communication, a lot of this situation could have been avoided. Not all of it, but a lot of it.” 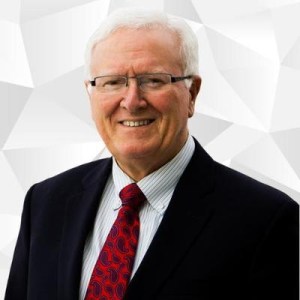 The retired MP has been a vocal critic of the 2019 decision to move the RCMP Operations Communications Centre (OCC) from Truro to the RCMP headquarters building in Dartmouth’s Burnside Industrial Park. Casey admits he was originally concerned about Truro losing 65 well-paying jobs. But he says subsequent conversations with his former Liberal colleague (and former Toronto Police Chief) Bill Blair led him to conclude the move does not meet “best practice” standards for emergency communications.

Casey says emergency communications policy used by both the Toronto Police and the Ontario Provincial Police follow standards developed by the U.S. FEMA (Federal Emergency Measures Association), NENA (National Emergency Number Association), and the National Fire Protection Association. Those groups all stress the importance of having two separate geographic locations to respond to “911” calls for police, fire, and ambulance service. This lessens the risk of communications being knocked out by a severe storm or a terrorist action.

In Nova Scotia, the majority of 911 calls that come in from around the province are answered from a Communications Centre operated by Halifax Regional Police out of the former Dartmouth police station on Mount Hope Avenue. Emergency 911 calls are also answered and first responders dispatched by officers working out of the RCMP’s Operations Communications Centre in Truro. Both locations seamlessly answer any type of call and act as “backup” for each other.

“After the 2014 shooting on Parliament Hill, the RCMP did a forensic review and discovered their communications failed,” says former Liberal MP Casey. As a result, they set up a second site off the Hill for communications. If something happened and the Hill office got shut down, they would have a backup. So, for MPs and for Ministers, they’ve demanded there be geographic separation. But for the Nova Scotia public, they are taking that away, and I just do not understand how it can happen.”

According to an internal 2017 report Casey obtained under the Access to Information Act, the RCMP reviewed several options before deciding where to move its Operations Communications Centre.

“The decision to relocate the RCMP Operational Communications Centre (OCC) followed an extensive feasibility study and months of follow-up work to determine the future of the OCC,” said Corporal Jennifer Clarke, spokesperson for the RCMP “H” Division, when asked to explain the reason for the move. “Our focus during the study and throughout the decision-making process was on the health and safety of our employees, operational requirements and fiscal responsibility.”

A 2017 internal RCMP report obtained by Casey shows how each proposal scored in a number of categories. 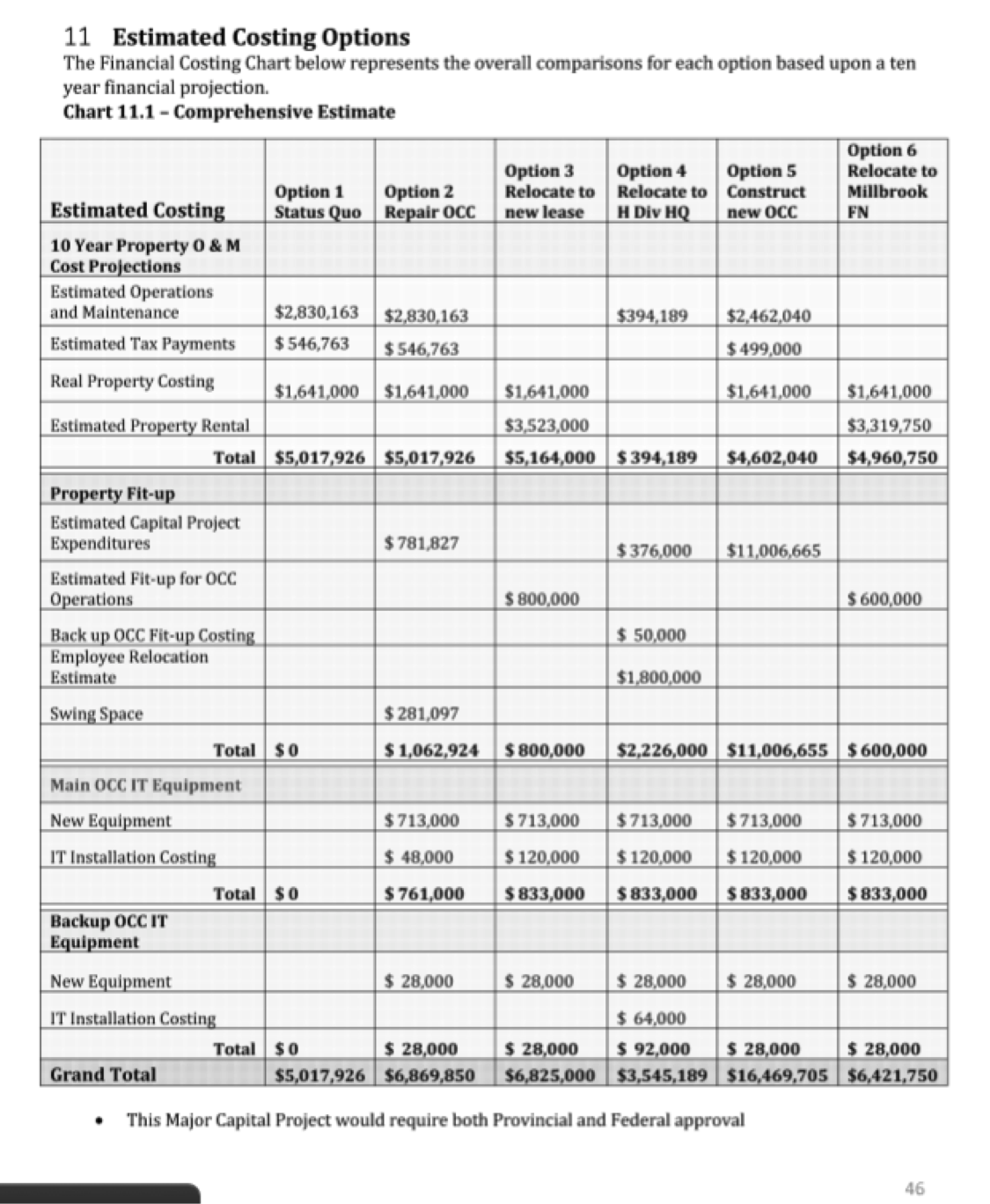 The new RCMP HQ in Burnside came out on top partly because it was assigned a “zero” for rent to reflect the value of unused space at the shiny RCMP HQ that opened in 2013, while the other bidders were assigned a cost of $1.641 million each. Subsequent digging and another Access to Information request by Casey eventually revealed the fact that the police force does pay rent on the building — to Public Works Canada. It is among the highest in the city, at almost $10.5 million a year.

As CBC News first reported, the Millbrook First Nation, which was the second choice, cried foul.

Blair referred Gloade’s letter to the RCMP, which is sticking by its 2017 internal report. Nowhere does it mention an earlier 2004 expert panel report commissioned by the RCMP. After a two-year wait for a response to another Access to Information request, Casey obtained the 2004 report, which states: “The Operations Communications Centre (OCC) primary service delivery site should be outside HRM due to the risk of placing two in close proximity. It should not be located within HRM.”

N.S. RCMP spokesperson Corporal Jennifer Clarke confirms the move from Truro to Burnside will happen during 2021.

Casey’s concern that the two Centres may be too close to each other in the event of a natural disaster or a potential fire or explosion at the DND’s ammunition depot on the edge of Burnside appears to have gained traction. In an email, Corporal Clarke explains what kind of contingency plan is being established to back up the two Dartmouth Communications Centres in case a catastrophic event occurs.

“Contingency plans for ‘H’ Division RCMP include a back-up RCMP OCC located outside of HRM and portable equipment that would allow us to restart operations should both the primary and back-up OCC be non-operational,” Clarke says.

Clarke refused to confirm if the backup portable gear will be stored at the New Minas detachment in the Annapolis Valley, as first reported in 2019. Casey contends this backup plan still has weaknesses, because it does not meet standards that require the same staffing and equipment as a Primary Centre.

Casey claims former Public Safety Minister Ralph Goodale told him the portable backup emergency Communications Centre would be operational within one hour of both Centres in Dartmouth going dark. But Casey says an hour is too long to wait for people who may need to evacuate due to fire, flooding, or an active shooter in their midst.

He says what happened at the Onslow fire hall proves RCMP leaders and managers need to pay more attention to improving emergency communications.

“The RCMP built too big a headquarters in Dartmouth,” says Casey. “Their real estate problem has taken a priority over the safety of Nova Scotians. Communications is far down on their priority list. I think what happened in northern Nova Scotia is a reflection of this.“