Four guards and two inmates at the Burnside jail had a “physical altercation” Saturday, say Halifax Police. “Three of the staffers were injured, but none needed to be admitted to the hospital,” reports the Chronicle Herald. The jail has been in lockdown for a week, which will make the atmosphere all that more stressful for both jailers and prisoners.

Haligonians Olivia Fader and Mal Harris went to New York, and to the Brooklyn Bridge.

Unbeknownst to Fader, Harris planned to propose while they attached a lock with their initials to a bridge railing. On another lock, with the engraved words, “Don’t Freak Out,” Harris attached a gold cut emerald diamond ring. But as Harris used a key to pop the lock open, the ring fell between two planks of the boardwalk.

Fader recounts the unlikely course of events in her blog:

40 feet below us, on an industrial platform (inaccessible to the public) we spotted the ring. I attempted to keep Mal calm while Madeleine [a friend also on the trip] ran back to where she had seen NYPD officers.

Minutes later she returned with two officers, Manley and DeFazio. They were confused at first, but soon understood our plight and committed to getting the ring back to us if it was in their power to do so. 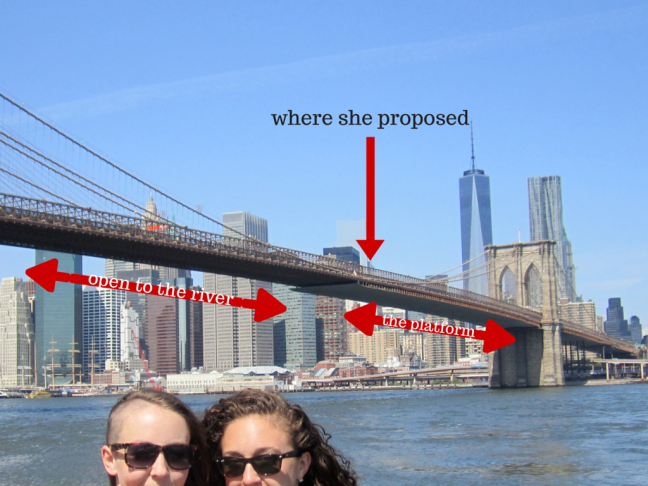 After much deliberation about their method, they walked back to Brooklyn, drove across the bridge, and stopped Saturday afternoon New York traffic so they could park and make their descent.

A few anxiety ridden minutes passed, and finally Officer Manley emerged with the ring in hand. Giving us the thumbs up, they then drove back to Brooklyn, and we met them to make the exchange. 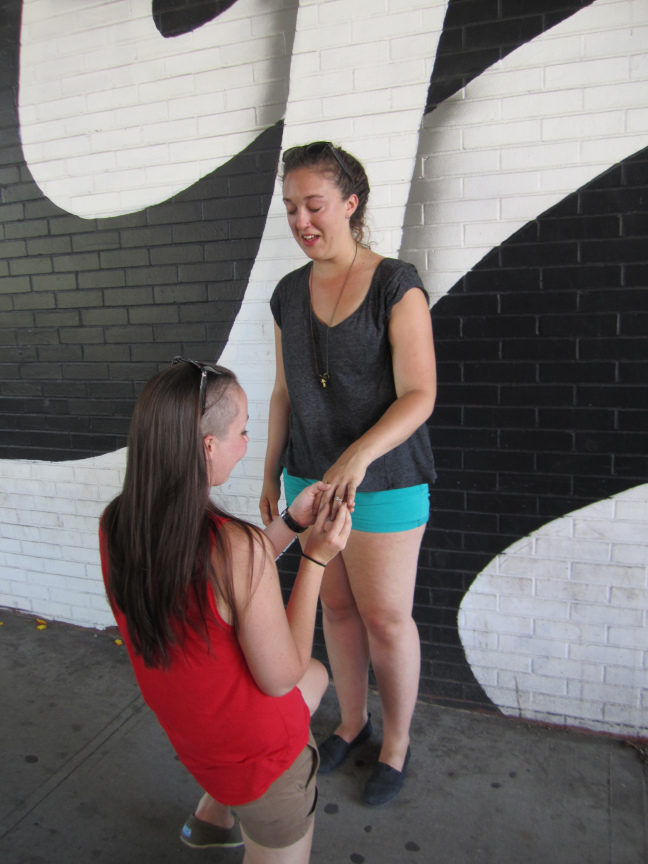 There’s a lot of hatred and negativity towards our community; we’re certain it will be generations before that is eradicated.  That’s why we felt it important to share our story, to provide a bit of hope that there is good out there too. 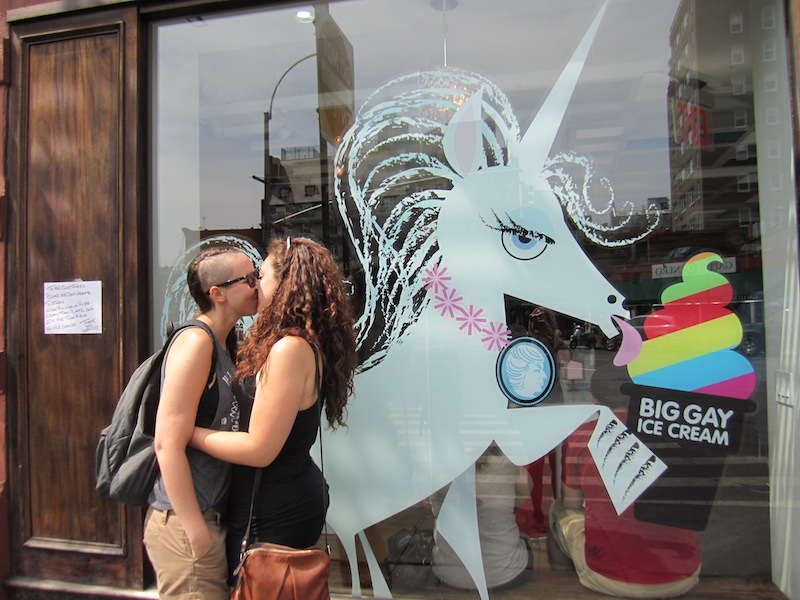 Friday night, a balcony collapsed in the south end, injuring six people. Balconies falling is a recurring issue in HRM, which suggests there is an underlying problem. The Halifax police department got a search warrant to search the south end property.

Halifax Regional Police responded to an address on Earleton Ave. in Dartmouth at approximately 1:30 p.m. on Saturday, September 27 regarding a weapons call. A 15-year-old male youth was stabbed in the eye by a 74-year-old woman. The boy was taken to the IWK for treatment of the injury he sustained. The 74-year-old woman was arrested at the scene without incident and is currently in custody. The Integrated General Investigation Section is currently investigating this incident and the investigation is in the early stages.

UPDATE (as of Sunday, September 28): The scene of this incident was processed which included the execution of a search warrant. The 74-year-old female suspect was later released from custody on a promise to appear in court at a later date and also on an undertaking with conditions. She’s facing the following charges: assault with a weapon, assault causing bodily harm and possession of a weapon dangerous to the public.

A killer whale was spotted Friday in the Bay of Fundy. Killer whales are normally on the west coast, not in the Atlantic, but there’s been at least one prowling around Nova Scotia for the past few years, the CBC reports.

There was a randy moose running around Stellarton, but aiming for Halifax females [insert your joke here].

Some people in Mahone Bay like poodles. Go figure.

A horse in Prince Edward Island was killed after being hit by a car.

Peter Ziobrowski explains the architectural issues related to them.

2. First they came for the nurses…

Now that Stephen McNeil has taken on the nurses’ union, will he next go after the doctors’ union? Stephen Kimber points out that the Doctors Nova Scotia contract, costing $800 million a year, expires in March.

The EU and Canada: A Strategic Partnership—Stronger than Ever (2:30pm, University Hall, Macdonald Building)—Marie-Anne Coninsx, the ambassador of the European Union to Canada, will explain how the Comprehensive Economic and Trade Agreement (CETA) is the bestest thing ever.

You need 11 men to run an offensive drive, right? Well, this is pretty offensive:

On Monday night, a panel on a two-hour pregame show for Monday Night Football will, among other things, address domestic abuse. This panel will discuss, once again, the appropriate penalty for hitting a woman. 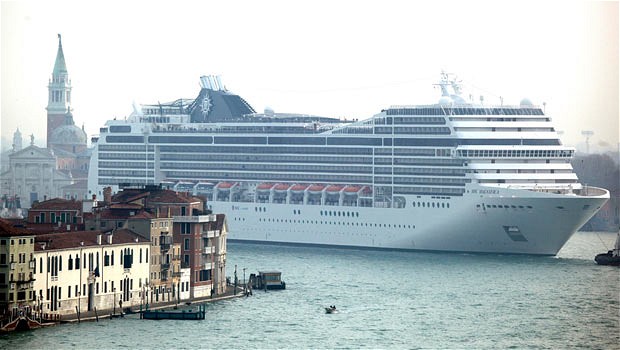 Four cruise ships with a total capacity of over 4,000 passengers are in port today. That used to be a rare occurrence, but now is somewhat regular—there are another three four-ship days on the October schedule. This is usually celebrated as an economic boon for any city, although that benefit is generally overstated. But people in Italy have had enough of it. The Costa Concordia incident has raised concerns about the ships, and when 13 cruise ships (including Seabourne Quest, in Halifax today) visited Venice one day last fall, Venetians lined the canal banks in protest. The Guardian explains that:

An estimated 40,000 tourists will be brought into Venice on board the cruise ships on Saturday and Sunday. Some view the influx of visitors as a much-needed economic boost, with tourists spending and thousands of locals employed in jobs related to the industry. But others fear the shiploads of tourists encourage a “Disney-fication” of their city – already one of the most visited in Europe. The number of tourists arriving in Venice on board cruise ships rose from below 100,000 passengers in 1999 to 1.7 million in 2012.

“Tomorrow will not be a nice day for our city, even if the sun is out,” declared the 75-year-old in an advert in Corriere della Sera, half of which was taken up with a black and white photograph of himself.

“With the ignoble procession of 13 ships in the Venice lagoon comes the Eternal Funeral of the world’s beauties,” he added.

Such protests continued into this year, and were successful: last month the Italian government banned large cruise ships from Venice’s Saint Mark’s basin and Giudecca Canal, in order to protect the view of St. Mark’s Basilica.

Sorry about that haiku thing.