You are here: Home / Featured / Bear hunting: “Hundreds and hundreds of teddies and other stuffies are out there giving our kiddos something to look forward to and making them smile and laugh” 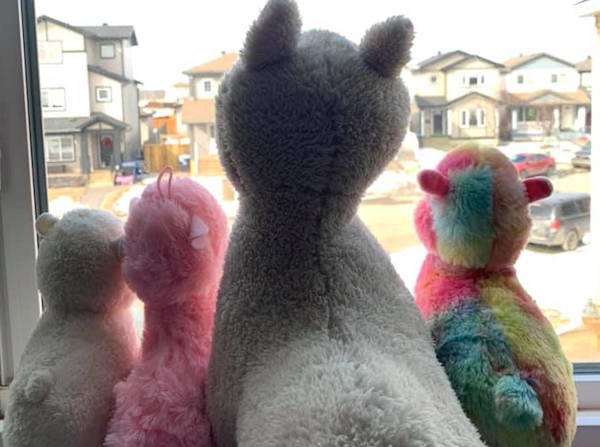 Bear hunting is a pandemic pastime that’s sweeping neighbourhoods across the globe.

It’s likely soon coming to a neighbourhood near you, if it’s not there already.

Inspired by the book ‘We’re Going on a Bear Hunt’ by Michael Rosen (here’s the author acting it out), people are placing teddy bears and other stuffed creatures in their windows. The idea is to give children hibernating at home a fun and safe activity that gets them out and walking or driving with their parents or guardians.

Media reports are sharing glimpses of bears peering out of windows in the UK, the US, New Zealand, Australia, and also Canada.

A quick search for ‘bear hunt’ on Facebook brings up bear hunting groups in Newfoundland and Labrador, Fort McMurray, Winnipeg, and one private group in Pictou County, Nova Scotia.

People typically post the name of their neighbourhood or street so parents can bring their children to hunt for bears in their own burrows.

Amber Guthro started the Teddy Bear/Stuffie Hunt 2020-Pictou County group on March 25, the day after reading about a similar initiative in Idaho. She said she figured a few people would likely join in.

In six days, the group has grown to include more than 1,100 members and about 5,000 posts, comments and reactions.

Guthro said the initiative is allowing the community to do something together socially while at the same time physically distancing.

“Hundreds and hundreds of teddies and other stuffies are out there giving our kiddos something to look forward to and making them smile and laugh,” she said on Tuesday night.

Guthro has been heartened by the comments from parents, many of whom have told her the bear hunt allowed their child to get out of the house, have fun, and smile.

“Our kiddos are no doubt processing so much right now, most of it they keep inside, and if we can do anything to take their minds off the scary things they may be hearing, well, that’s what is most important,” she said.

Guthro believes that so far, her group is the only large one organized in the province. She hopes to see the movement grow here.

“It makes my heart so full. I would highly recommend starting a group in your community,” she said.

The overwhelming response and popularity of the teddy bear hunt in Newfoundland and Labrador in recent days led Prime Minister Justin Trudeau to tweet about it on Monday night, noting that “In this challenging time, there’s nothing wrong with a little levity.”

Tricia Mansfield is originally from Newfoundland. She started the Bear Hunt Fort McMurray group on March 22 after her mother in Stephenville, NL asked her if she had a teddy bear in her window.

“She told me about what they were doing back in Newfoundland and I thought it was a great idea,” Mansfield said. “I checked out groups up here and they didn’t have anything set up so I decided to create a group.”

Mansfield said within 24 hours her group grew from zero to more than 1,000 followers.

“I wasn’t expecting that so fast. The response is so amazing. The children are having so much fun hunting bears and counting them,” she said. “The parents love it because they can get out of the house and do something with the kids during this difficult time.”

Mansfield said they’ve not had one complaint. Some families will walk the neighbourhood with their young children, always maintaining social distancing, while others will drive.

Some families will share photos of their bear hunting adventures to Mansfield’s page.

“My favourite comment/story would be seeing the little kids’ pictures, some with binoculars, hunting for bears,” she said. “I’ve been thanked a few times by the parents for putting this idea together. Makes it worth it for me right there.”

As the idea spreads, Mansfield hopes to see it catch on in large numbers in Halifax.

“I think it’s a simple but rewarding thing to do for the kids. I think all places should do this,” she said.