You are here: Home / Commentary / Barb Hamilton-Hinch knows the score

Talk to an average American basketball fan and I’d wager that he (or she) hasn’t a clue about the game’s Canadian bona fides.

As it happened, Ontario native James Naismith took a job, in December 1891, at a YMCA in Massachusetts. Then age 30, he reportedly invented the indoor sport to chill out rambunctious youths during harsh New England winters. An opponent of segregation, Naismith also mentored John McLendon who, in 1961, became the first black to coach a professional basketball team — The Cleveland Pipers.

A 2014 New York Times article recounted the close ties between the men: “McLendon later insisted that Naismith ‘didn’t know anything about color or nationality’ and added, ‘Everything I ever did when I was coaching, I can trace back to him.’”

Set against the backboard of Canada’s role in hoops history, I was doubly delighted to discover that Dalhousie University faculty member Barb Hamilton-Hinch stands among the sport’s most accomplished national figures. Her position? Official score keeper. 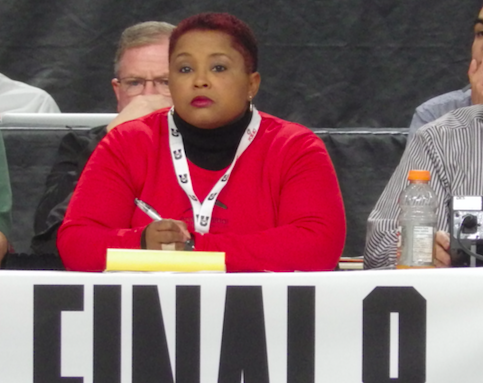 “I started keeping score for basketball when I was 16,” said Hamilton-Hinch, an assistant professor of recreation and leisure studies in the department of Health and Human Performance at Dal.

“That means you’ve been score keeping for thirty-five years,” I responded, mindful that the proud daughter of Beechville will today (International Women’s Day) celebrate her 51st birthday. “That’s right,” she said.

Reared in a family of basketball enthusiasts, Hamilton-Hinch played on local youth squads and later, as a point guard at Sir John A. MacDonald High School. It was there, at the urging of her then coach, Jill Jeffrey (then also an assistant coach for the Dal women’s basketball team) that she began keeping score. “Jill asked her players if we wanted to work the games at Dal and I took to it,” Hamilton-Hinch said. “I haven’t stopped scoring since.”

Jeffrey went on to coach the women’s basketball team at Saint Mary’s University and is today the physical education teacher and athletic director at Sackville High School. She praised Hamilton-Hinch’s overall basketball acumen.  “Barb knows the game and is extremely intelligent,” she said. “She’s kept up with all the rule changes over the years. As you know, she has a Ph.d.”

Hamilton-Hinch scored Dal men’s and women’s basketball games throughout her high school and university years. Certified by the Switzerland-based International Federation of Basketball (FIBA), she has served as official score keeper at the highest levels, including Canadian playoff and championship games.

“I’ve been the score keeper for every iteration of Halifax pro teams — the Windjammers, the Rainmen, and now the Hurricanes,” Hamilton-Hinch explained. “I’ve scored inter squad games for the Toronto Raptors.” While she’s not yet scored World or Olympic* basketball competitions, her FIBA certification allows her to do so.  “It’s a goal I hope to achieve one day,” she said.

As a spectator at a recent Hurricanes game, the intricacies of the sport eluded me completely. But for “minor officials” (the technical name) such as Hamilton-Hinch, the contest was chockablock with rebounds, turn-overs, fouls, time-outs, shot clock, game clock, and other basketball particulars to observe, monitor and chart throughout the 48 minutes of play.

Her compensation? A modest honorarium, a smattering of complimentary tickets, and game day meals.

“I enjoy the adrenaline of basketball,” said Hamilton-Hinch, adding that as an official score keeper she must maintain an impartial demeanour at all times. “I’m also well-suited to the intense powers of concentration than score keeping demands. I thrive on the pressure and give it my all.”

Indeed, such is her passion for hoops that the mother of two sons (now 19 and 16) happily breastfed them, as infants, while she scored games. “Nobody cared,” she said.

After several conversations with Hamilton-Hinch, I’m still not sure which folks seated at the long table on the periphery of a basketball court are responsible for what. But because of her, I’ve come to understand that she and her colleagues are the ones who (among other tasks) interpret and document the myriad hand signals of the referees. Most of all, I now know that as official score keeper, Hamilton-Hinch has the final word on the game. 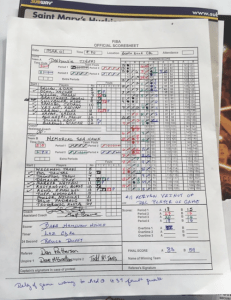 She explained: “My scorebook has the final say in any discrepancies with the score on the score board or fouls. I will sometimes check with other minor officials at the table to confirm calls but what I say goes. So it needs to be accurate.”

Through her use of a pen with four colours of ink (red, green, black, blue) Hamilton-Hinch has developed a system of score keeping that has now been replicated by many of her peers. “There are four quarters of basketball, so I use a different colour to score each one,” she said. “But I don’t use black and blue consecutively, because they are too similar and could lead to errors.”

Errors?* Hamilton-Hinch doesn’t roll that way. On the contrary, she is widely hailed as one of the most skilled score keepers in the nation. “It’s a relief to walk into an arena and see Barb at the table,” said Bev Greenlaw, a celebrated basketball coach (now retired) of numerous Nova Scotia championship teams. “There’s one less thing to worry about when Barb is working the game. She is respected by coaches, referees, players, everybody. She’s a consummate professional.”

In addition to teaching at Dal and score keeping, Hamilton-Hinch sometimes referees soccer (which she also plays). Interestingly, she does not groove to sitting court side (cue: Drake) as a hoops spectator.

“If I’m not working the game, basketball is not that much fun for me,” she said. “I need to be in the thick of the action.”

Tonight, Barb Hamilton-Hinch will celebrate her birthday by scoring the University Sports Championships Men’s Final 8 at the Scotiabank Centre. To date, she has scored more than 1,500 basketball games.

*Any mistakes in this article are strictly my own, including that she has indeed scored Olympic games.