Developer George Armoyan has demonstrated threatening behaviour towards city employees, and so has been banned from city offices for six months. Chronicle Herald reporter Brett Brundale hits all the right notes in her article, dispassionately explaining how and why relationships between developers and staff can become stressed, but her takeaway gets right at Armoyan’s character: 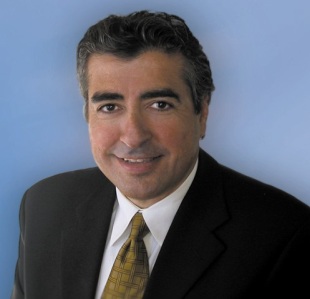 In a letter to mayor and council, Armoyan pointed out that he is “one of HRMs largest taxpayers” and as such should have the right to appear before council.

The developer said he “wasn’t looking to bend the rules” or get special treatment. “What I’m looking for is to get council to hold their people accountable.”

Meanwhile, Armoyan has launched four lawsuits against the city and municipal staff.

“I will sue them for every God damned thing because I’m not backing down,” he said. “They’re making our life miserable. I’ll make theirs miserable, too.”

I’ve heard many complaints about Armoyan.

The student group Divest Dal got a receptive hearing this week before the Dalhousie Board of Governors. Divest Dal is pushing the university to disinvest in the companies heavily involved in the fossil fuel industry. This article is behind the Examiner’s pay wall, and so available only to paid subscribers. To purchase a subscription, click here.

Because giving the Irvings $300 million from provincial coffers wasn’t enough, there’s now a proposal to change the city charter to allow the city to single out the Irving Shipyard for a special tax break.

The province is also changing the laws around e-cigarettes, to treat them exactly as regular tobacco: no smoking in indoor public spaces and the usual restrictions that apply to retailers. The law will be the most restrictive in the country. It’s unclear (to me, anyway), if this will affect hookah bars.

Two of the pilot whales stranded in shallow water in a PEI cove have died.

Marilla Stephenson has written her last column for the Chronicle Herald, saying good-bye to readers. She doesn’t explain why she’s leaving, whether it’s simply a welcome retirement after a long career, or if she reluctantly accepted a retirement package in anticipation of a rumoured staff-reduction in the works. Often, higher-paid journalists at the end of the career will take buy-out packages in hopes of preserving the jobs of one or two lower-paid junior reporters at the beginning of their careers.

Stephenson and I rarely agreed about anything, but spirited antagonism between commentators is good for readers. The local journalism scene just got a little less interesting.

Yesterday, John Wesley Chisholm posted this on his Facebook page: 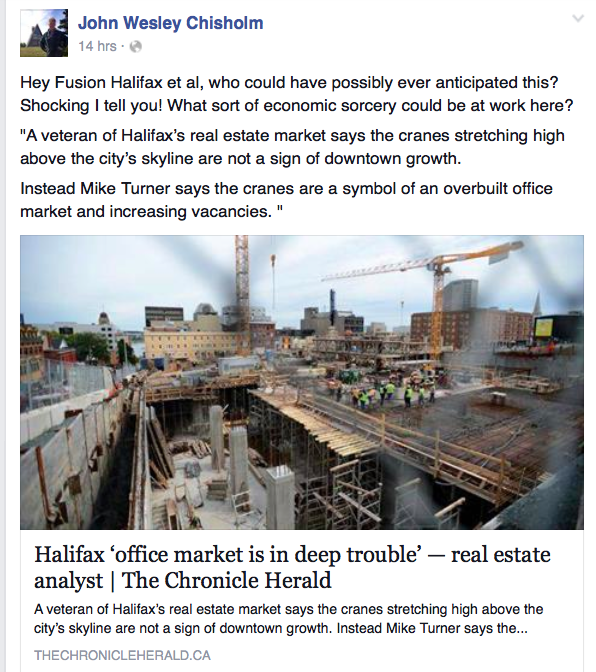 Chisholm’s post links to a Chronicle Herald story, but that story is no longer on the paper’s website, and I can find no cached version of it. Very strange.

I’m not sure why the story would’ve been taken down. Mike Turner has been issuing dire warnings about the glut of office space downtown for many months, going so far as to advise his clients to “cash out” of the downtown real estate market before prices collapse. Surely yet another warning from Turner wouldn’t do any more harm to the Chronicle Herald’s advertisers than they’ve already suffered. Who knows? Maybe the article was taken down so the copyeditors could have another run at it, and it’ll be back up sometime in the future.

It’s been, what? three weeks or so without a Roger Taylor–Joe Ramia lovefest? Of course even the most dedicated relationships have their rough spots, a bit of discontent, the roaming eye, maybe a dessert plate or two thrown across the kitchen in anger before storming out to sleep on a buddy’s couch. But fear not! Taylor is back today, giving Ramia sloppy make-up kisses. 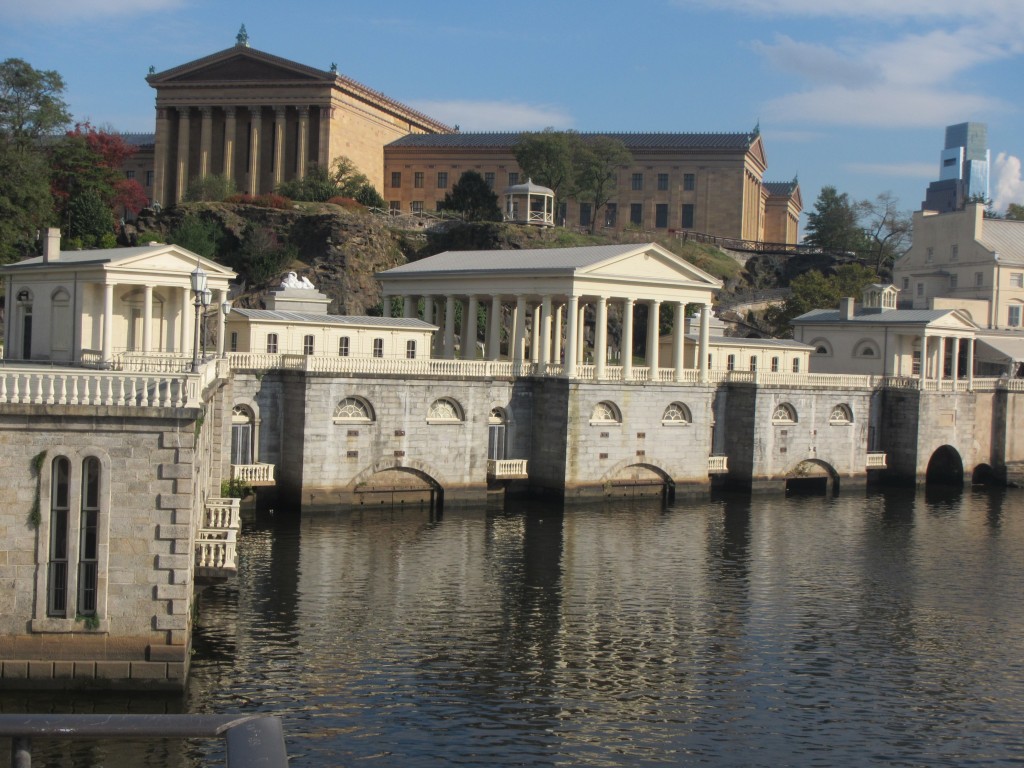 Stephen Archibald goes to Philadelphia, and of course notices the stuff the rest of us miss.

Liberal party leader Justin Trudeau has staked out a strong prochoice position on abortion, going so far as to require all Liberal MPs to vote prochoice on any legislation that may come before them. New Brunswick’s newly elected Liberal Premier, Brian Gallant, however, has been far less forthcoming, and on the campaign trail offered only a “review” of the province’s restrictive abortion laws. Now in office with a majority government, Gallant has taken no action on the issue.

Reproductive Justice New Brunswick is pushing Gallant to do the right thing, so has started the Days of Inaction timer. I think this is one area where Nova Scotia Liberals can do a lot of good: urge your New Brunswick counterparts to rid themselves of the anti-women laws. 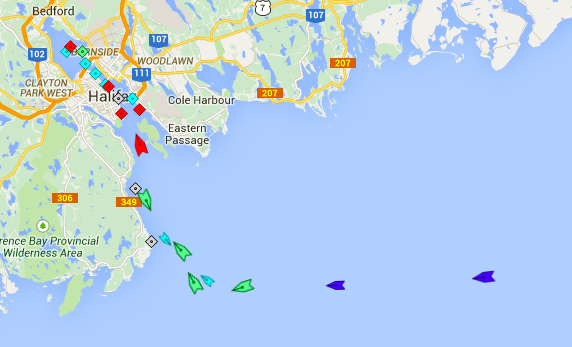 Ships heading into Halifax Harbour, 6am Saturday. The Havelstern (red) is passing McNabs Island. The Seoul Express, which left port last night, is exiting the Harbour near Herring Cove. Inward-bound container ships and bulk carriers (green) are the Maersk Palermo, Tasman Strait, and Barkard. They are followed by the cruise ships (blue) Pearl Mist and Maasdam. The light blue ships are a pilot boat and a supply vessel.  Map: marinetraffic.com

Morning File takes Sunday off to honour his noodlage, the Flying Spaghetti Monster. See you Monday.