The Liberal government is slashing the provincial assistance to community groups that promote health, recreation, and addiction recovery, reports the CBC’s Jean Laroche:

The Recreational Facilities Development Fund, which provides up to $150,000 to build or help upgrade sports fields, arenas or playgrounds, is facing a major reduction.

Community grants for groups that are involved in mental health or addictions work are being cut by 40 per cent overall.

The department won’t be processing any new requests for community grants this year, as a result.

Nineteen other groups funded by the department are all seeing their funding cut by almost 25 per cent.

The Chronicle Herald’s Michael Gorman notes that “in total, there is about $4 million less across the department” of Health and Wellness:

Of note, community grants for mental health and addictions were reduced from $1 million to $600,000. There will be no calls for submissions in 2015-16. Several organizations will see grants reduced by about 23 per cent.

Many, if not all, of these groups provide services that ultimately reduce future costs to government: promoting an active lifestyle for young people will mean less in future health care expenditures, for example. Helping someone beat a crack addiction can sometimes bring almost immediate returns in savings to the court system. Reducing the spread of AIDS brings obvious cost savings.

Despite the rhetoric, austerity budgets are not about writing down debt or thinking of the future. They’re about looting the public and common wealth here and now, the future be damned.

(For more on the reference to “austerity forever,” click here.)

Last Thursday, after billionaire lobster tycoon John Risley lambasted the film tax credit as “absolute nonsense…the government cannot afford to be subsidizing any industry to this extent,” I detailed the many millions of dollars Risley’s companies, Clearwater and Ocean Nutrition, have received in government assistance through the years.

Today, I publish a related article, “John Risley disses film tax credit that benefits his girlfriend’s ex-husband,” in which I reveal additionally that Risley is chair of the board of a company that is run by his girlfriend and that has received $1.6 million in government financing since Risley invested in it in 2012.

This article is behind the Examiner paywall and so available only to paid subscribers. To purchase a subscription, click here.

Yesterday, I discussed how Mark MacPhail, the executive assistant to Keith Colwell, the Minister of Fisheries and Aquaculture, took to Twitter to accuse film industry protesters of smoking pot at last Wednesday’s demonstration outside Province House and then called film industry workers “louts.”

Many people in the political world have told me that such behaviour usually leads to disciplinary action, but on his Facebook page yesterday morning, Colwell absolved himself on any responsibility for MacPhail:

By yesterday afternoon, however, Colwell was publicly saying MacPhail should apologize, and last night Screen Nova Scotia published the following on their Facebook page:

Earlier this week Mark MacPhail, an employee of a Nova Scotia cabinet minister, tweeted some unflattering comments about workers in the screen industry. Those tweets were widely shared, and caused offense and much consternation. Late this afternoon, we received this apology from Mr. MacPhail. As it’s directed at all Screen Nova Scotia members, we wanted to share it with you: 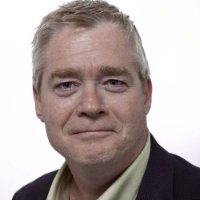 I wish to offer my sincere apology for comments I made to members of your industry recently.

I offer no excuses for my comments. However, I want to make it clear that I was not speaking on behalf of anyone in the Provincial Government.

My comments were a mistake. I have offered deep regrets to my employers. I offer the same to you, and all members of your sector.

On behalf of our members, the board of SNS accepts Mr. MacPhail’s apology. We hope he will now take a minute to view our educational video on the ‪#‎NSfilmtaxcredit‬ in order to learn more about what the film industry and ‪#‎NSfilmjobs‬ actually contribute to the NS economy. 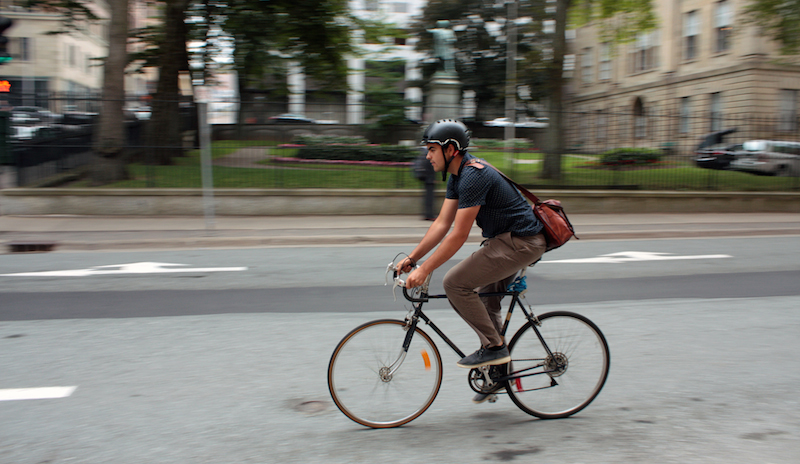 Halifax Cycling Coalition representative Matt Worona cruises down the left side of Hollis Street, where someday a bike lane could be painted. Photo: Hilary Beaumont

A city press release from yesterday:

Monday, April 20, 2015 (Halifax, NS) – Final details are being formalized as the municipality prepares for the installation of a much-anticipated bicycle lane along Hollis Street.

Residents are invited to drop in and discuss the new proposal with city staff at an open house on Thursday, April 30, from 12-2 p.m. and 4-6 p.m. at 1546 Barrington Street, Suite 104 (Downtown Halifax Business Commission).

Public consultation took place last summer on the proposed bicycle lane and several good suggestions were provided to municipal staff. Many of those suggestions are being incorporated into the final design. Those suggestions include:

I dunno, I’ll believe it when I see it. For its part, the Halifax Cycling Coalition seems to think it’s a done deal. The organization sent me this press release:

The Halifax Cycling is pleased to see that the Hollis Street bicycle lane will be built this summer. The Hollis Street bicycle lane was approved in 2011 as part of the one way street conversion plan. Since then, an entire cohort of university students have come and gone from the two NSCAD campuses that the lane connects. As a popular bicycle route along the city’s most important truck corridor this is an important change that will improve safety and help close some gaps in Halifax’s bicycle lane network.

“The Hollis Street bicycle lane will provide an important connection for residents who choose to ride their bicycles,” says Halifax Cycling Coalition board member Eric Jonsson. “This lane will make bicycle use more attractive as a commute option in Halifax.”

The city will be installing a painted buffer between the bicycle lane and truck traffic. Motorists will be prohibited from stopping during peak times, ensuring the lane is available when use is heaviest. The Halifax Cycling Coalition will continue to work with city staff to find appropriate loading zones so that the lane need not be used for commercial purposes. We will continue to push for the installation of plastic bollards to further separate people who ride bicycles from this commercial truck traffic.

The lane completes the missing southbound link through downtown, complementing the Lower Water Street bicycle lane. The city’s solution to bring cyclists from Upper Water Street to Hollis Street is particularly innovative. We look forward to the implementation of the lane this summer.

University of Ottawa law prof Michael Geist objects to the use of film tax credits because they are a “race to the bottom“: 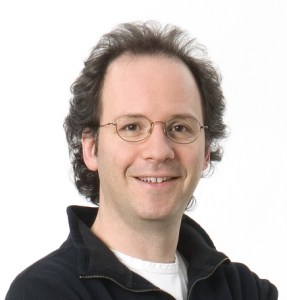 While the government’s approach is certainly open to criticism – abruptly cutting the tax credits without warning may force the cancellation of long-planned productions this summer – the larger question of whether it should provide massive tax relief to the film and television industry is an important one.

But the most notable Canadian study on the issue has never been publicly released and is rarely discussed. The Ontario government’s Ministry of Finance conducted a detailed review of the issue in 2011, delivering a sharply negative verdict on the benefits associated with spending hundreds of millions of dollars each year in tax credits. It recommended eliminating a 25 per cent tax credit for foreign and non-certified domestic productions that would have saved $155 million per year.

Geist used the Freedom of Information Act to try to get a copy of the Ontario review. He wasn’t able to get the complete detailed review, but he did get a presentation about the review that was made to the provincial cabinet in 2011. Interestingly, at the time Laurel Broten was an Ontario cabinet minister, sitting as Minister of Education, and so would presumably had been present for the presentation. Broten would later move to Nova Scotia, where she would author a review of the tax system that recommended changes in this province’s film tax credit.

Geist reviews that presentation and concludes:

While the economic evidence to support film and television tax credits is weak, that does not mean that governments should not support the industry, since the importance of culture extends beyond dollars and cents. Nova Scotia’s decision may be unpopular with some, but it is likely to be emulated by other governments as they assess how to support the film and television industry in a more economically responsible and effective manner.

Parker Donham relates labour lawyer Ron Stockton’s objection to the use of the term “film industry,” and notes:

Stockton is making a broader and more important point. We remember great civilizations of the past more for the art works they produced—the paintings, architecture, sculpture, myths, and literature—than for their economic prowess.

In a future centuries, present day Nova Scotia is far more likely to be remembered for Trailer Park Boys, “The Boat,” Marion Bridge, and “Peter’s Dream,” than it is for Michelin Tire, Port Hawkesbury Paper, and ships that did or did not eventually start here.

If we reduce every government program to its monetary return, we lose something more important than tax revenue and jobs: We lose pieces of our heart and soul.

I agree with this, but it’s hitting on something I’ve been trying to wrap my head around for the past couple of weeks: Is the film tax credit really the best way to support the arts? I mean, I like a good laugh too, and to each their own and good luck and so forth, but if Trailer Park Boys is the pinnacle of Nova Scotian culture, maybe we’ve gone about it wrong, ya know?

In the Depression, the US federal government supported the arts through a triad of public agencies: the Federal Art Project, the Federal Writers Project, and the Federal Theatre Project. I know, times change… still, arguably, the works that came out of those federal projects have a cultural heft that escapes the millions of dollars in public subsidy we’ve more recently doled out through film tax credits. Maybe there’s something to learn there.

So, our honourable Mayor Cecil Clarke promises to say his prayers in the hallway. Silly man. God doesn’t cast a ballot. We do — us old taxpayers who were forced to spend the winter inside our homes because there were no sidewalks.

While he’s praying for snowless winters and the miracle of turning the harbour into a container terminal, we’ll be praying for a mayor who will show a little consideration for the citizens who need and use those sidewalks; someone who cares for the safety of our little ones and tries to employ more school crossings guards instead of firing the ones we have.

Check back in 15 minutes.

Screen Nova Scotia has published a video, the first in a three-part series, explaining the film tax credit. While the video is of course told from the film industry’s point of view, it’s a fair explanation: 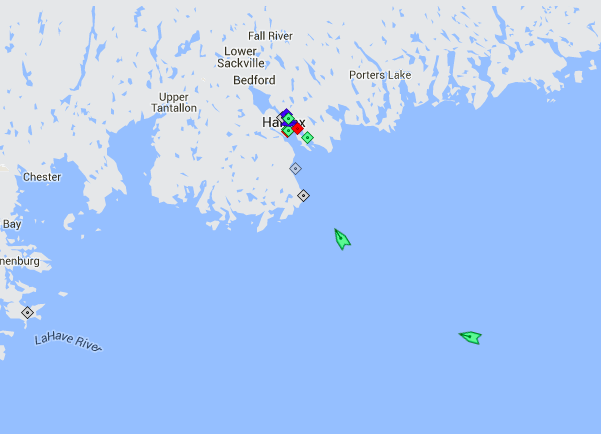 I’ll be stuck in a government office all morning. Not sure if I’ll have internet access or not.