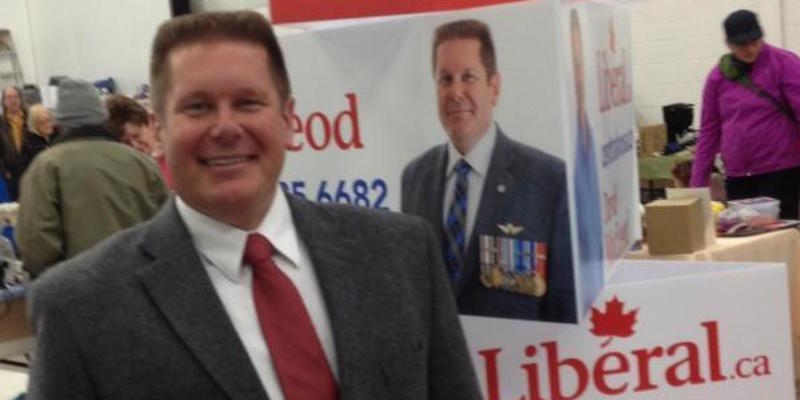 “The former Liberal candidate picked to take on Justice Minister Peter MacKay in Nova Scotia’s Central Nova riding says he threw in the towel when the Liberals decided to support Bill C-51, the Conservatives’ controversial anti-terrorism legislation,” reports the CBC:

“I served in the Canadian military for 27 years. My grandfather served as well, he served to hold back tyranny. More often or not, I usually faced oppressive political systems and I did that in the name of Canadian democracy,” he said.

“But when I come home now, I find that C-51 is going to really affect our Charter of Rights and Freedoms or in some cases, negate the Charter and I find that very offensive.”

2. There goes the neighbourhood 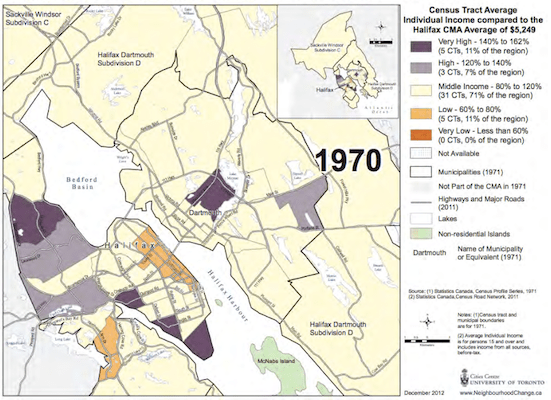 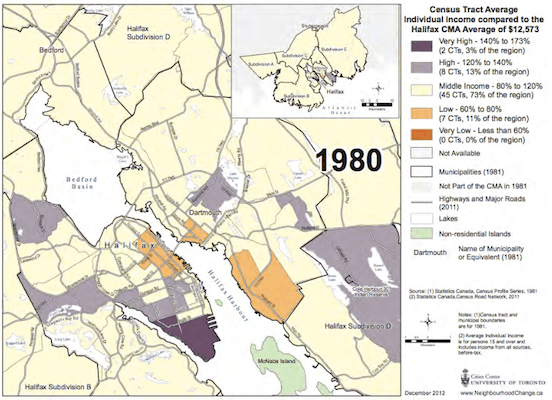 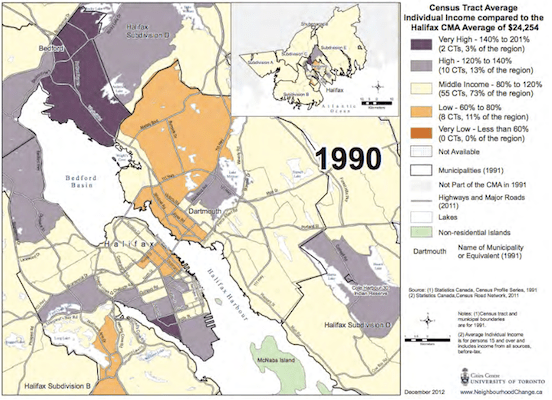 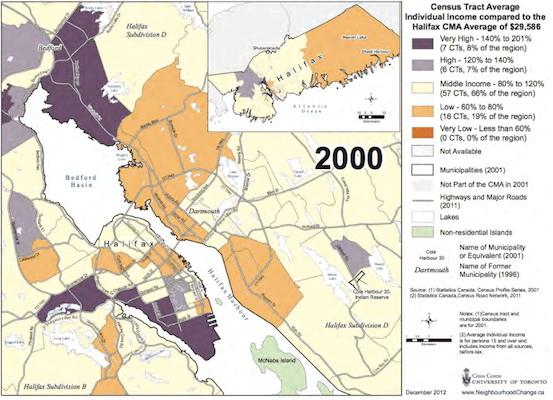 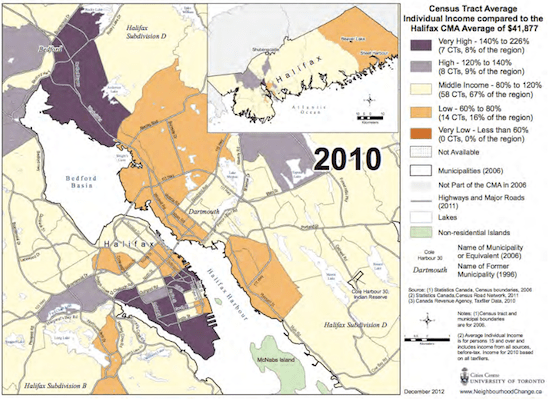 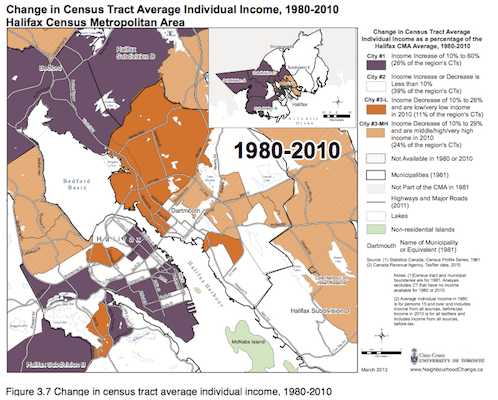 A group of anthropologists at Dalhousie University published a “three cities” analysis of Halifax, Neighbourhood Change in Halifax Regional Municipality, 1970 to 2010: Applying the “Three Cities” Model. The paper uses census data to analyze the average income changes over three decades in Halifax neighbourhoods.

The broad take-away from their research is that in Halifax income inequality doesn’t express itself geographically to as large a degree as it does in Canada’s larger cities. In fact, Halifax has seen a broad “middling” effect, and over the last four decades a slightly larger number of people are living in neighbourhoods that fall within 20 percent of the city’s average income. It’s probable, however, that the size of the census tracts is masking finer gradations of inequality, as unlike in larger cities, Halifax has very rich and very poor people living very close to each other. 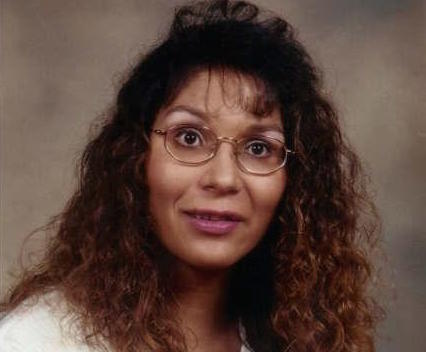 I’m terribly late with this because I haven’t yet shifted my daily attention to the Vices and Buzzfeeds of the world, where lots of my reporter friends are working now. Former Examiner contributor Hilary Beaumont, for instance, works for Vice, where she’s doing excellent work.

Beaumont wrote about the murder of Tanya Brooks on April 30, but so far as I can determine there’s been no local follow-up on the article. Brooks’ body, you’ll recall, was discovered in a window well at St. Patrick’s-Alexandra school, on May 10, 2009. The subsequent news coverage made much of Brooks’ past involvement in the sex trade. Beaumont gave much broader context to Brooks’ life, showing her as a full person with varied interests, loved by family and friends.

An older resident, who didn’t want to be named, said he heard people had killed her because she testified against someone.

Three more people who were close to Tanya alleged someone put a price on her head. Two of these people independently said that price was $2,000.

The story that Tanya testified against a drug dealer is widely known among long-term residents of the area, though they didn’t seem to know or wouldn’t say the dealer’s name.

All of this may well be neighbourhood rumour, but there’s more than a grain of truth to the story.

More than a year before her murder, Tanya had a run-in with a violent dealer who nearly killed her.

According to court documents obtained by VICE, on March 28, 2008 Patrick Segerts severely beat Tanya with a metal pipe for ten minutes and only stopped when the pipe broke. An agreed-upon statement of fact said he struck her between 75 and 100 times.

He beat her so badly that the arm she raised to defend herself broke in multiple places. His blows bloodied the back of her head and gave her seizures on the way to the hospital.

The Crown prosecutor on the case, Susan MacKay, would later tell the judge, “He could have killed this woman—it’s sheer, sheer luck that he didn’t.”

Beaumont went on to give the grisly details of the beating, as relayed in court documents and in the paperwork required for a search warrant. Beaumont then continued:

Two months later, while Segerts was in jail, Tanya was killed.

According to media reports from 2009, police were investigating threats Tanya received before she died.

Before Tanya decided to testify against Segerts, a close family friend who didn’t want to be identified said Tanya received “a couple scary phone calls.”

“They didn’t want her to testify,” she said.

May 10, 2009, at 8:20 PM, Tanya left the police station on Gottingen Street. Police won’t say why she was there that evening. The station is a seven-minute walk from the school where her body was found.

According to a CBC story, an unnamed man living near the school said he had seen “a gang of men following a woman down an alley the night Brooks was killed.”

Beaumont tried to speak with Segerts, but to no avail.

Segerts has not been charged in relation to Brooks’ death, and has not been publicly named as a suspect by police.

A police email to reporters yesterday:

At 1526 hrs, police responded to a Motor Vehicle accident at Bayers Road in relation to a 6-year-old girl being struck by a vehicle on Bayers Road. The girl was in a marked crosswalk, crossing with a crossing guard when struck. The 49-year-old male driver has been issued a Summary Offence Ticket for “Failing to yield to pedestrian in crosswalk”. The girl received a bump on her and was taken to the IWK for observation. The injuries do not appear to be life-threatening. 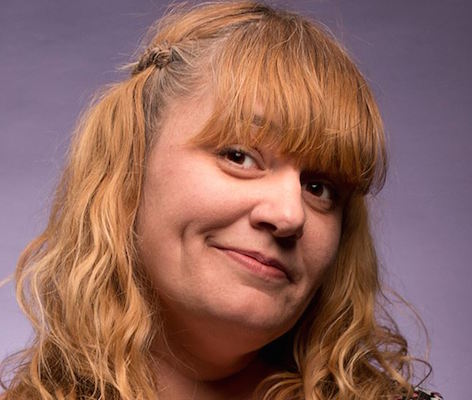 Charlene Gagnon, an independent candidate in the Dartmouth South by-election, was caught up in a bizarre and senseless reading of the election act. Explains the CBC:

Gagnon said Elections Nova Scotia representatives had told her that her salary would be considered an illegal campaign contribution.

Contributions can only come from individuals, not corporations or unions, which pay the salaries of most individuals.

Gagnon works for a non-profit group and is also working on a contract for another group. She says the old reading of the law would have forced her to take time off work during the 28-day campaign.

But that’s clearly not what the Act says. As Sam Austin points out on my Facebook page:

For greater certainty, where an employee provides services to
a registered party, electoral district association, candidate or registered third party and the employee receives remuneration from the employee’s employer for providing those services, the employer is deemed to have made a contribution in the amount of that remuneration.

What Elections NS missed is “those services.” Emphasis on those two words. If you were being paid for services that haven’t been provided to a registered party, electoral district, association etc, then they aren’t “those services” and aren’t a contribution by your employer. If your salary isn’t a contribution, than there is no illegal donation. So if you’re being paid for work that isn’t political, then the Act doesn’t apply. It seems clear! It’s all moot now of course.

It’s moot because as soon as Premier Stephen McNeil heard about controversy he ordered that a change in the Election Law passed by the legislature in April be immediately proclaimed. That change does away with the issue that was tripping Gagnon up.

A couple of hours after McNeil’s press release was issued, Gagnon was knocking on doors and handing out her campaign propaganda. She showed up on my stoop; I would’ve invited her in, but the place is a mess. 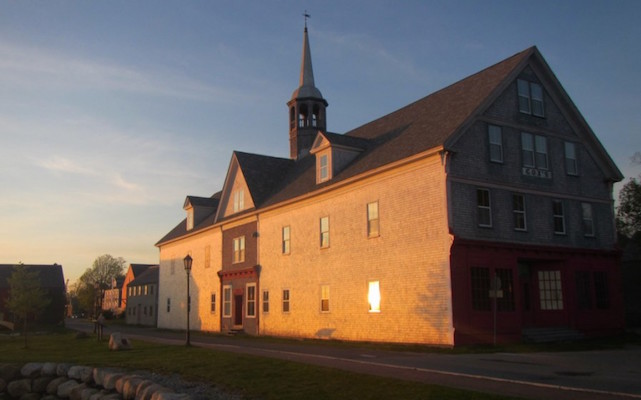 Stephen Archibald visits Shelburne. As usual, the photos are wonderful, but stick around and hear him talk to the eeler.

If I had a nickel for every time someone said “I do not agree with everything that Bousquet writes, but…,” well, I’d be spending the rest of my life rolling nickels. Bev Keddy says it, and a bunch of other nice things about me, today.

Mowing the grass is a weird obsession, says Parker Donham.

Halifax formally established its Municipal Archives in 2005 and, just 10 years later, it launched a website where visitors can search over 250 years of historical municipal council meeting minutes. As a professional archivist, I can confidently say that this truly is a unique resource.

Materials like this help form the bedrock of our democratic society. With such tremendous assets at stake, we should all be gravely concerned to see that today Halifax regional council will discuss a proposed administrative order that would remove virtually all authority from the city’s municipal archivist and place it in the hands of the city’s Chief Administrative Officer (CAO) and other top bureaucrats. The actions of these officials are, for better or for worse, documented in the records over which they are now seeking control.

Under proposed Administrative Order 2015-001-GOV, the Municipal Archives will essentially be reduced to a storage site with little or no authority to guide the development of file plans and information management policies that form the core of the city’s archives program.

The order allows city staff wide discretion to deviate from commonly accepted standards and removes virtually any reference to the Municipal Archivist’s role and responsibility. It is a blatant power grab with questionable intent. The order does not support transparency or accountability in our municipal government.

Coun. Waye Mason has made a motion that the proposed order be approved and existing orders governing municipal records be repealed. In doing so, he has recommended that Halifax severely undermine the Municipal Archives, a new but unparalleled organization that has been doing excellent work to acquire and make available the records of our municipal government.

City council (1pm, City Hall)—not a lot going on today. Reg Rankin wants yet again to change the city’s naming policy such that we can name public buildings and parks and whatnot after people who are still alive. Bad idea! We should wait until they’re dead and buried for long enough that we’re reasonably sure they weren’t horrible people. There’s that administrative order mentioned by Creighton Barrett above, which would take archival authority away from the archivists and give it to CAO Richard Butts. I can see it now — the Richard Butts reading room in the new Dartmouth Museum. And there’s a public hearing for another crappy apartment building in Fairview. Lots of tender offers and so forth, and Matt Whitman will play environmentalist and try to overturn previous approval of the asphalt plant in Tantallon.

On this date in 1755, Fort Beauséjour fell to the English, leading to the expulsion of the Acadians. 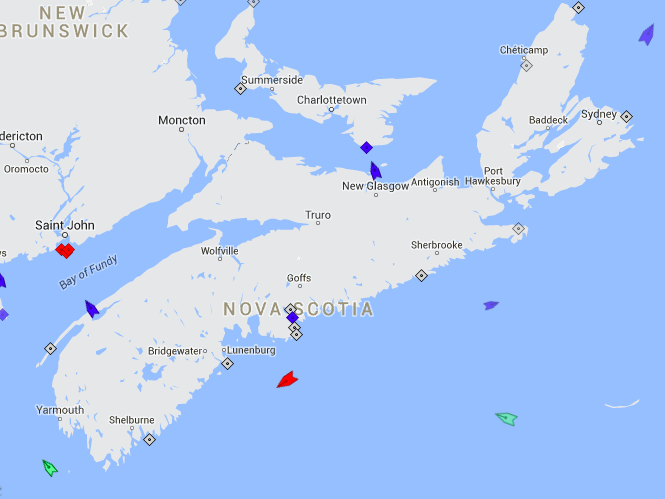 Oceanex Sanderling ro-ro-container, St. John’s to Pier 41, then to Autoport, then sails back to St. John’s. (Oceanex Sanderling and Fusion, which make milk runs between Halifax and St. John’s and Halifax and Saint-Pierre, respectively, must be the hardest working ships in the North Atlantic.)
APL Cyprine, container ship, Damietta, Egypt to Fairview Cove West
Harefield, general cargo, sails to Santos, Brazil

The cruise ship Pearl Mist is in port today and, unusual for cruise ships, staying overnight before departing tomorrow.