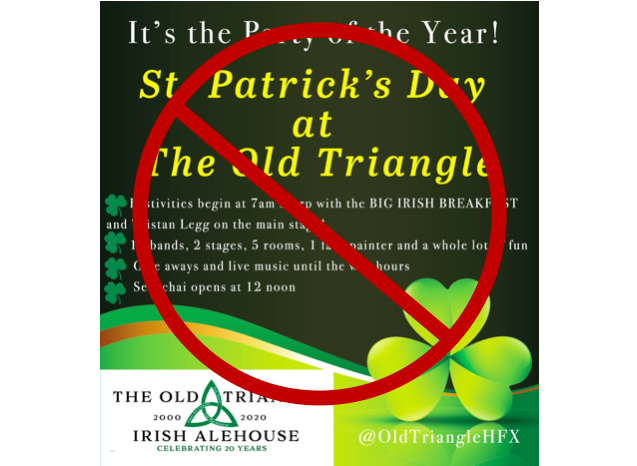 Traditional lineups at dawn outside a pub for a hearty breakfast and live music will not be part of St. Patrick’s Day observances tomorrow.

An ad hoc consortium of owners of Irish-themed establishments has postponed 2020 celebrations in Halifax, Dartmouth, and Sydney as a result of public health measures announced by the Province to inhibit the spread of the COVID-19.

“As a result, Finbar’s Irish Pub, The Celtic Corner, Durty Nellie’s and The Old Triangle, along with the Old Triangle Sydney and Governors Pub in Sydney, have decided to postpone their traditional St. Patrick’s Day festivities including early opening, and tentatively re-scheduled them for May 17th 2020,” the Old Triangle announced on its website and through social media.

And while bands performing Clancy Brothers’ classics in a room of morning revellers won’t mark the day, the bars will remain open during regular business hours. Other popular bars such as The Split Crow in downtown Halifax and Seamus David’s Pub at Dartmouth Crossing have followed the lead of Irish bars and cancelled their live entertainment for tomorrow. The Resolutes, a private club on Inglis Street near the universities, has also cancelled its traditional party but will remain open.

At The Old Triangle Ale House in downtown Halifax, work was underway this morning to move tables and chairs so patrons would stay two metres apart to comply with “social distancing” guidelines issued by the Department of Health.  The government has decreed no more than 150 customers are permitted to be in a bar at one time.  The Old Triangle’s capacity is now 144 people on two levels and the owners have taken additional precautions. Cleaning is taking place every two hours and staff will now seat customers as they arrive at the door, refusing entry to anyone coughing or sneezing.

Even those measures may be insufficient to tamp down the virus. In Quebec, the government of François Legault has closed all bars to slow the spread of COVID-19.

Cheryl Doherty co-owns the Old Triangle pub and restaurant with her husband Brian and two other family members.  Here’s her explanation for why their business isn’t shutting down on March 17:

Right now, our biggest concern is our staff. We have 55 people here. They are part of an economy where they don’t have the luxury of working from home.  A lot of people don’t have social and financial safety nets. The government really needs to step up. They had indicated people who had been infected, or needed to self-isolate, could apply for EI early, but they haven’t seemed to extend that to people who might be thrown out of work!

We’re a family business and none of us slept last night. Do we lay off the guy who has two young children, or, layoff the guy whose wife is expecting twins?  We also have staff coming forward who said they want voluntary layoffs because they have elderly parents and they don’t want to be exposed; so we are trying to answer these questions.

We have no doubt that within the next week or two bars and restaurants will be shutdown by government. But if we voluntarily close now, my staff have no recourse. They are just out of work with no money.

Today’s message on social media from The Old Triangle, Durty Nellie’s, Finbar’s, and The Celtic Corner concluded this way:

We are all very hopeful that the preventative measures taken by government and the public will limit the pain caused by this outbreak. Happy St. Patrick’s Day seems inappropriate at the moment but we do wish all of our guests, friends, staff and families the very best as we face an uncertain immediate future. We’re all in this together.