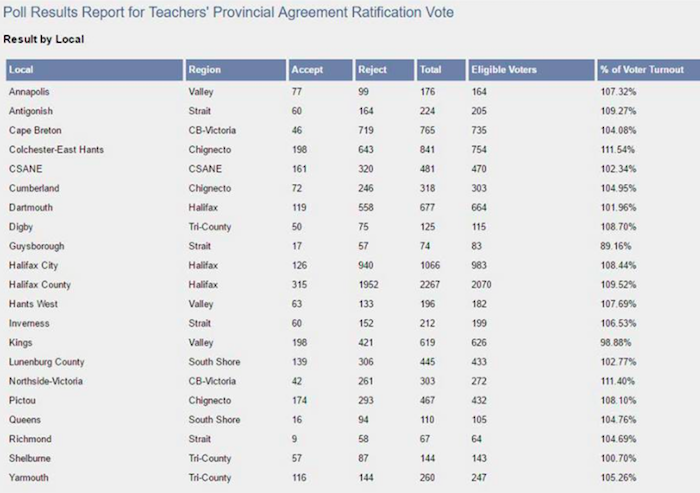 Nova Scotia’s 9,300 public school teachers have voted to reject a third tentative agreement reached between the Nova Scotia Teachers Union and the Department of Education and Early Childhood Development since the opening of negotiations on September 29, 2015. In a province-wide electronic vote held today, more than 100 per cent of NSTU’s public school members voted 78.5 per cent against the tentative deal. Substitute teachers working today were eligible to vote, bringing the total vote count over 100 per cent. 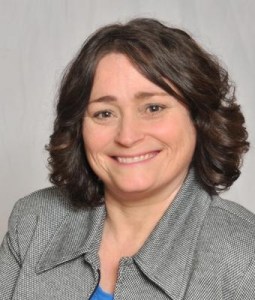 “Public school teachers have spoken once again in rejecting this tentative agreement,” says NSTU president Liette Doucet. “It’s clear our members are frustrated, they deserve better and what Government offered in this agreement doesn’t go far enough in addressing the real classroom concerns that affect teachers and students.”

As far as next steps, Doucet says, “We do know that our work-to-rule job action will continue. What we don’t know is what Government’s next move will be. We don’t know if they will agree to go back to the negotiating table, if they will legislate a contract, change the terms and conditions of employment or lock us out.” She adds that the provincial executive will be meeting to discuss any other options available.

The current teachers’ contract expired on July 31, 2015. Public school members have been in a legal strike position since December 5, after voting 96 per cent in favour of strike action. The current work-to-rule job action continues.

In response to the no vote, Education Minister Karen Casey issued the following statement:

The outcome of today’s union vote is disappointing for students, parents, and government. This was the third tentative agreement reached with the union leadership and it was reached after an intense and productive period of bargaining.

This agreement provided a fair wage offer and showed we were willing to make further investments in classrooms. The agreement contained $20 million that we could invest to improve classroom conditions and it gave teachers a say in how that money would be invested.

I want to assure parents and guardians that their child’s education is a priority for government.

We must now take time to consider the next step.

My guess is that the government will soon force a contract on teachers. 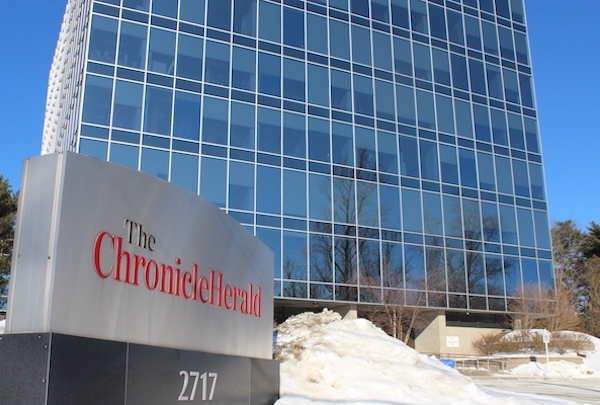 Talks between 55 on-strike Chronicle Herald newsroom workers and the company broke down on Thursday over seniority, jurisdiction and a handful of other issues.

The company said it would not continue to bargain on individual issues, telling the union bargaining team it had to accept the company’s latest package offer.

The company refuses to do layoffs by seniority, a key union demand, even though it has said it will lay off nearly half the newsroom staff.

Jurisdiction is another important issue in the year-old work stoppage. The union withdrew an unfair labour practice complaint late last month when the Chronicle Herald agreed to withdraw its illegal contract proposal during a meeting between both sides and a representative of the Nova Scotia Labour Board.

“The breakdown in talks is frustrating,” said HTU president Ingrid Bulmer.  “In the year since this strike began, we’ve only met face-to-face for about eight days. And six of those were in the last two weeks.

“This company needs to stay at the table and negotiate.”

The union was prepared to discuss outstanding issues but the company was pushing a package deal that had a lot of objectionable language, she said.

The union has agreed to a longer work week, a five per cent across-the-board wage cut, a freeze to the DB [defined benefits] pension plan, lower salaries for new hires, a cut in days off/vacation, lower mileage rates and other concessions.

The Herald has said it will lay off 26 of the 55 reporters, editors, columnists and editorial writers, photographers, page technicians, library and support staff on strike.

The union struck the Herald on Jan. 23, 2016, when the company imposed a regressive contract on its staffers, many with more than 25 years of service.

Since the strike began, HTU’s parent union, CWA/SCA Canada, has successfully reached deals with five other Canadian newspapers, including the Cape Breton Post, the Moncton Times & Transcript and the Saint John Telegraph-Journal.

All the contracts involved wage increases. There were no concessions, said CWA staff representative David Wilson.

“After over a year on strike, this employer needs to sit down and get serious about concluding a deal,” Wilson said. 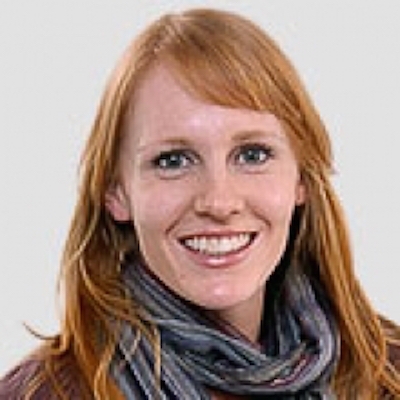 “Could Canadians lose universal access to health services over the next decade? That’s what the Canadian Health Coalition fears if the Trudeau government doesn’t honour an election promise to negotiate a National Health Accord with the provinces and territories,” reports Jennifer Henderson for the Halifax Examiner: 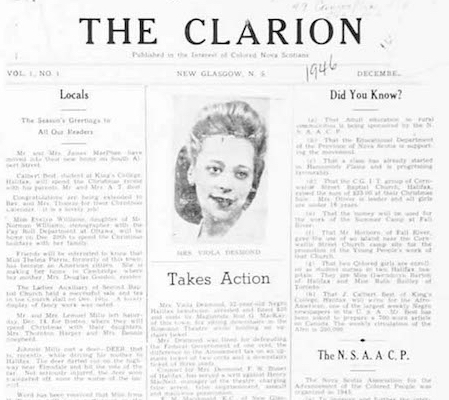 “The Nova Scotia Archives is asking people to check their old stacks of newspapers to help them piece together a part of the province’s history,” reports Cassie Williams for the CBC:

The Clarion, based in New Glasgow, N.S., was one of the first newspapers published in the province specifically for the black community.

Examiner contributor Evelyn White wrote about the Clarion in December:

The historic selection of Halifax native Viola Desmond as the first Canadian woman whose visage will grace the front of a bank note ($10) has prompted me to reflect on Best and her pivtoal role in bringing Desmond’s saga out of the shadows.

The first Black owner and publisher of a newspaper (The Clarion) dedicated to the African-Nova Scotian community, Best broke the story about Desmond’s arrest, in 1946, after her refusal to relinquish her seat in a “whites-only” section at the Roseland cinema in New Glasgow.

Born in the city in 1903, Best was well-versed in the Roseland’s segregationist customs. In 1943, in a curtain-raiser to Desmond’s experience, she’d  bought downstairs tickets for herself and her son — future diplomat James Calbert Best — to see a film at the venue. They were both removed from the theatre and later unsuccessful in their legal attempt to challenge the theatre’s racist policy.

Bruised but not broken, Best featured Desmond on the front page of the first issue (December 1946) of The Clarion (above) and championed her case throughout the ordeal that ended (seemingly) with Desmond’s fruitless 1947 appeal to the Supreme Court of Nova Scotia. 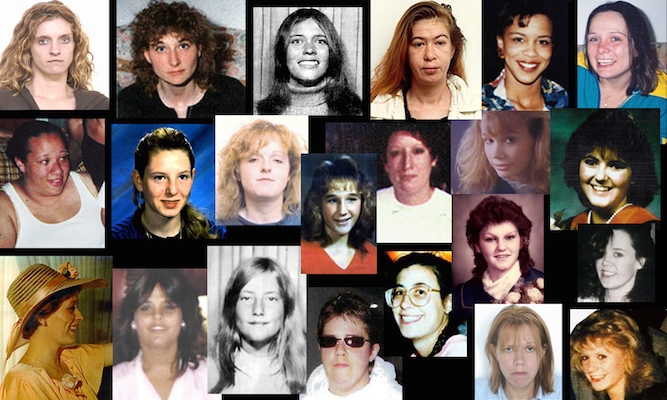 I’ve taken Part 2 of the Dead Wrong series from behind the paywall. Available for all to read now are the following sections:

Introduction
Part 1: The War of the Roses
Part 2: Trial and Error

Parts 3 and 4 are still behind the paywall because I’ve got to pay for this work somehow. Investigative journalism costs money and time, which is why your subscriptions are so important. Click here to purchase a subscription.

Where’s Part 5? I’ve been trying to track down two people to talk to… it’s become apparent that I won’t find them so I’ll have to publish without them, but it will still take time to write the piece. I don’t know how long. Thanks for your patience.

Today’s meetings have been cancelled due to flakiness.

Note: the universities have delayed opening today due to the storm. 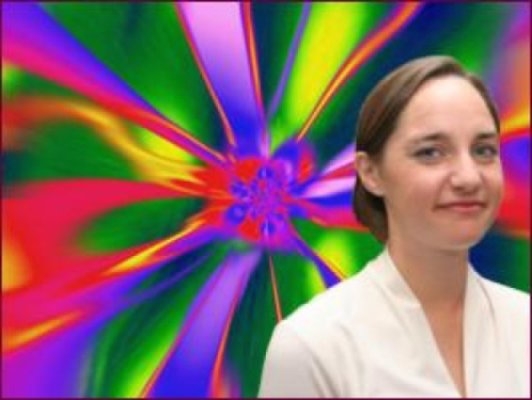 Health Law and Policy Seminar (12:10pm, Room 104, Weldon Law Building) — Erika Dyck, from the University of Saskatchewan, will speak on “Who Has Seen the Asylum? History and Reconciliation in Mental Health.”

Showbiz Will Kill You (12:30pm, Room 2021, Marion McCain Building) — Roberta Barker will speak on “Death and the Working Woman: Actresses, Illness, and Forms of Labour on the Nineteenth-Century Stage.”

Nanostructures (1:30pm, no room given, but just wander around the Chemistry building and you’ll probably find it) — Pavle V. Radovanovic, from the University of Waterloo, will speak on “Polymorphism and Defects in Transparent Metal Oxide Nanostructures: Toward Controlled Functionalities in Reduced Dimensions.”

Superbugs (11:30am, The Atrium AT 101) Scott Banfield will speak on, “Treatment for Superbugs – Development of a Novel Class of Small Molecule Antibiotic.” 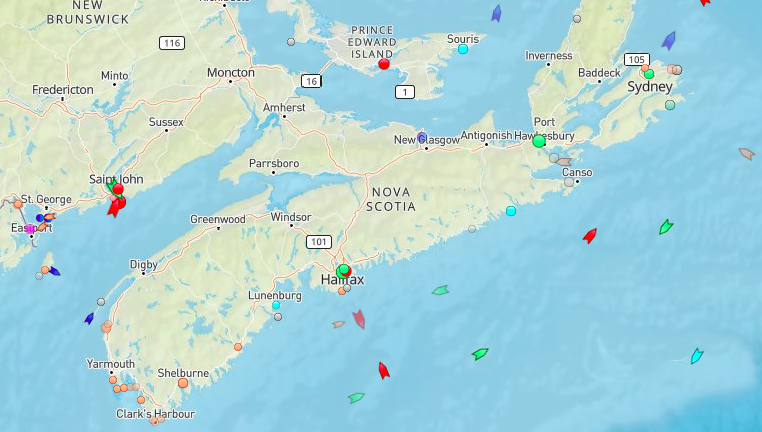 Due to my illness, Russ’s distance, the weather, and just plain bad attitude, the Examineradio podcast is taking a hiatus this week. We’ll return next week.

I have new business and society registries nearly ready to publish, and an article by Chris Lambie just awaiting art work. They should both be published today, but I’ve got to shovel first.

Yes, the song is dated, and wage slavery isn’t chattel slavery… but this morning I stumbled upon the old Cape Breton coal miners’ union song Arise Ye Nova Scotia Slaves, sung by Nipper MacLeod and the Men of the Deeps.