You are here: Home / Featured / Are anti-vaxxers meeting with your MLA?

It’s getting frosty out there, which means its the time of year when we at the Examiner take a stab at convincing you and yours (those who aren’t already subscribers) to support the continued existence and growth of the Halifax Examiner.

From her first Morningfile back in May 2015, El Jones has shared her insight, experience and wit with Examiner readers on an almost weekly basis. This past summer, after the death of Gregory Hines while in custody at the East Coast Forensic Hospital, Jones wrote this piece giving a thorough look at the conditions and background leading up to Hines death. 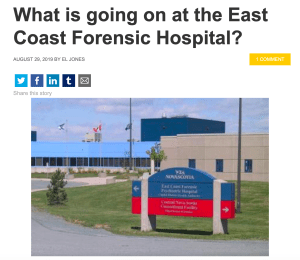 Jones had already been following Hines’s story, along with that of three other men held at East Coast Forensic Hospital, who had collectively filed a habeas corpus application with the court, arguing that they had been moved, without evidence, to a more restrictive section of the hospital, and were being held there indefinitely. Jones’s piece gets into the conditions at the hospital, as laid out by the men in the court application, and describes the effective trap these men were in. This is a piece that highlights Jones’s ability to really lay out the complexities of a situation that many news reports would treat much more simply, while at the same time pinpointing some of the questions that most directly get at the values actually at play.  Here’s Jones:

But maybe we should be asking a different question: What happens when we try to manage health issues of addiction and mental illness in carceral settings? And: Can patients ever get well when their treatment team also acts as police, investigating and condemning them? If psychiatrists have to act as detectives, surveilling and interrogating patients, can trust really be built to create an environment where people can address trauma? The environment in the hospital revealed by the men suggested that something is deeply broken in the ways we try to treat the most serious mental illnesses, the resources we have to do it, and the structures in which that treatment takes place.

El Jones’s work is damn good reason to support the continued existence and growth of the Examiner, and subscribing is a damn good way to do that.

A MLS graphic of the cyclone rocket it proposes to use at Canso.

Joan Baxter takes a look at various government communications around the proposed Canso spaceport and discovers that public servants were unquestioningly shilling for a private company, Maritime Launch Services. Along the way, we learn that one government bureaucrat sent a nasty email to a CBC reporter; others had rude things to say about the Halifax Examiner; and Stephen McNeil met with MLS and its Ukrainian “partners” even though they aren’t registered as lobbyists. 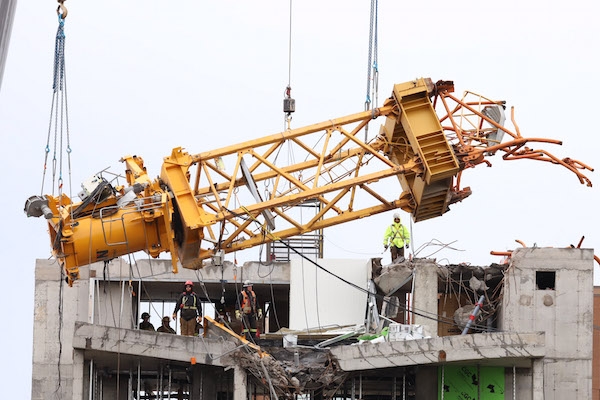 The last piece of the fallen crane is removed from the construction site on South Park Street. Photo: NSTIR

After getting the all-clear from two engineering firms, the province has lifted the local state of emergency in the area surrounding the collapsed crane on South Park Street. This in turn caused the city to lift the remaining evacuation orders in the area.  According to a provincial news release, construction for Brenton Suites, where the toppled crane was based, and the Olympus building, which took the brunt of the fallen structure, may now continue, expect for the top floors which sustained the damage.

Life on the street will not get back to normal quite yet, according to a city news release:

Beginning on the morning of Tuesday, Nov. 5, fencing will be removed and work will be undertaken to reinstate sidewalks, curbs, asphalt, and pedestrian infrastructure in the affected area. Barring any unforeseen issues, this work should be completed in approximately five days.

The section of Victoria Park that was previously restricted will reopen once the fencing has been removed. Landscaping work will continue in the area.

Two lanes of traffic will be maintained while work is underway. Pedestrian access to businesses and residences along South Park and Clyde streets will also be maintained at all times, with routing adjusted around the work site as necessary.

Parking may be restricted on the east side of South Park Street between Spring Garden and Clyde Street while work is underway.

The provincial release also stated, “the Labour and Advanced Education inspection of the crane and what factors may have contributed to the collapse remain ongoing.”

An Irving spokesperson said that all workers would be offered positions at the Halifax Shipyard, though it’s hard to imagine this move does not reduce the overall local workforce employed via these federal shipbuilding contracts.

The news of the layoffs comes only months after Ottawa confirmed in May that they would purchase two additional Arctic and offshore patrol vessel for the Canadian Coast Guard.

That would be in addition to the six it was already building for the Royal Canadian Navy.

Both Irving Shipbuilding and the Canadian government said at the time that the additional vessels would eliminate a need for layoffs in between the completion of the six original Arctic and offshore patrol vessels and the start of construction on the $60-billion contract for 15 Canadian Surface Combatant ships.

“Any work performed outside of Canada will be offset by making investments in Canada to ensure that 100% of the value of the AOPS contract is spent here at home,” said Lewis.

4. Elizabeth May steps down, Jo-Ann Roberts steps up 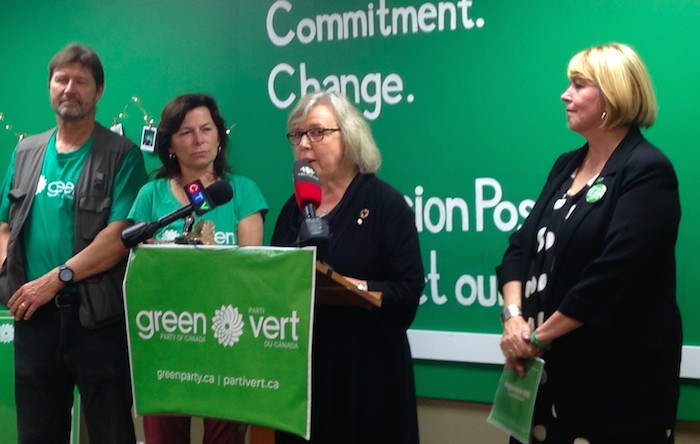 Elizabeth May has resigned as leader of the Green Party of Canada, with a new leader to be chosen next October at the party’s convention in Charlottetown, PEI.  In the meantime, former Halifax candidate Jo-Ann Roberts will step in as interim leader.

Roberts is a former CBC Radio host based out of Moncton and Victoria, and has run twice for the Greens, in Victoria in 2015 and in Halifax in 2019. CBC’s Emma Smith reports on Roberts’ radio interview after the news broke:

She told CBC’s Mainstreet:Halifax that she was surprised by May’s sudden departure, but that it comes at a good time for the Greens.

“We’ve had such momentum built through this election. We’ve seen climate move to the front burner on the political agenda. I think she feels the timing is right,” Roberts said.

“She’s always been politically savvy and knows that we may be facing an election under a minority government in under two years so now’s the time. Let’s get a new leader in place so that that person is ready to go.”

5.  Newly elected MLA Steve Craig meets with anti-vaxxer, and posts about it

On Monday afternoon Sackville MLA Steve Craig posted on social media about a meeting with chiropractor Dr. Dena Churchill to talk about “vaccines, their effectiveness in prevention and people’s right to choose or not.” Churchill was fined $100,000 by the Nova Scotia College of Chiropractors this summer for professional misconduct related to her extensive public sharing of her anti-vaccination views. Craig deleted all posts within hours of posting, but thanks to Reddit user rbchimp, the screenshots will live on. 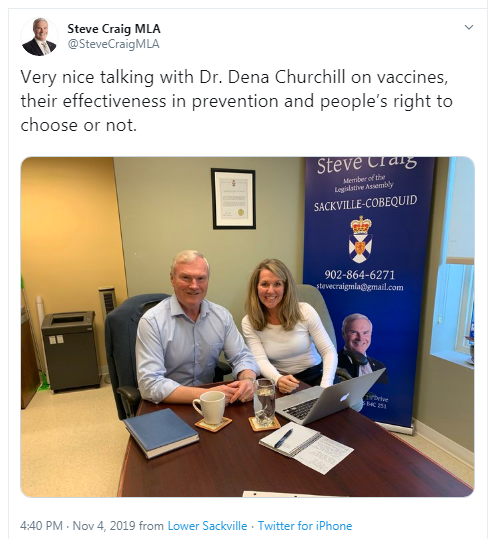 6. Sydney Port Board members quit after lack of endorsement from CBRM council

CBRM council has shut down an attempt by the Sydney port board to expand its mandate, and the board executive has resigned en masse in response. The CBC’s Tom Ayers gives some of the background in his report:

CBRM created the port board several years ago, requiring it to be made up of community professionals, such as lawyers, accountants, and business and marketing personnel.

The municipality also restricted the board’s mandate to include only the cruise ship terminal and its docks.

At the port AGM last week, the board sought to extend its mandate to cover the rest of the port and infrastructure, but several councillors and the mayor voted unanimously to accept only those parts of the proposed strategic plan that form part of the board’s existing articles of incorporation or projects that are already approved and underway. 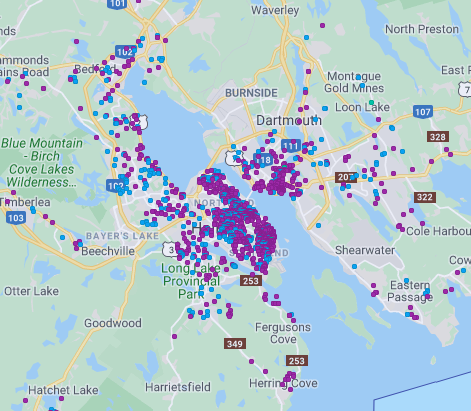 In the latest issue of Halifax Magazine, Kim Hart Macneill dives into the numbers behind Halifax’s rental market, and looks at the role of urban population growth, demographic shifts, stagnant incomes and short term rental growth in causing the current shortage of affordable accommodations in Halifax. Hart Macneill speaks with economist Neil Lovitt, who points out that while AirBNB’s overall Halifax numbers are not the main cause of our current crunch, the effect in certain neighbourhoods is concentrated. “In the old north end and the Hydrostone, if you’re talking about 10 units, that can be most of a street,” Lovitt tells Hart Macneill.

Police Commission – Special Meeting (Tuesday, 9:30am, Halifax Regional Police Headquarters) — an all-day meeting for the board to review last year’s work plan and “incomplete items,” and then to dive into bureaubabble about a SWOT analysis, which stands for “Strength, Weakness, Opportunity, Threat.” How’s this for a threat: No one takes you seriously because you can’t actually require the police department to do anything?

Community Services (Tuesday, 10am, One Government Place) — the committee will be discussing Poverty Reduction Grants.

Future of University Avenue Pop‑Up Engagement (Tuesday, 9:30am, outside Killam Library entrance) — they’re “engaging” on “visioning.” From the listing:

Halifax Regional Municipality (HRM) is engaging the public on visioning the future of University Avenue.

Given that University Avenue and Morris Street is the front door to all of our Halifax Campuses, Dalhousie Facilities Management is making an extra effort to hear from students, faculty, and staff at Dalhousie to inform HRM.

There are no proposals at this time from HRM – just an opportunity to bring ideas about what future you could envision for University Avenue and Morris Street. Add your thoughts to the process by stopping by for some quick and easy input.

Evolving our understanding of protein biochemistry (Wednesday, 4pm, Theatre A, Tupper Medical Building) — Gregory McCluskey from the University of Ottawa will talk.

Africville: A Spirit that Lives On – A Reflection Project (Tuesday, 10am, MSVU Art Gallery) — the last week to see this exhibition. Closes Sunday, more info here.

Persephone: Changing Seasons and Selves (Wednesday, 7pm, Laundry Room Art Gallery, Arts and Administration Building) — The first exhibition of the school year, featuring work by “students who are both in a transitional stage of their individual lives, and growing up in a world that is politically and socially in transformation.”

The song of the human voice, cultivated for centuries in medieval Europe’s centres of sacred and secular culture, especially monasteries and courts, developed in the late middle ages and Renaissance into the complex compositional art of polyphony–many voices coordinated together by moving patterns of rhythm and tonal harmonies and dissonances. This lecture will touch on a little of what fascinated both philosophers and artists of the Renaissance period: the awesome power of music to move the soul–whether to the heights of ecstasy or the depths of despair.

It’s November!  Tell a friend about the Examiner, why don’t ya?