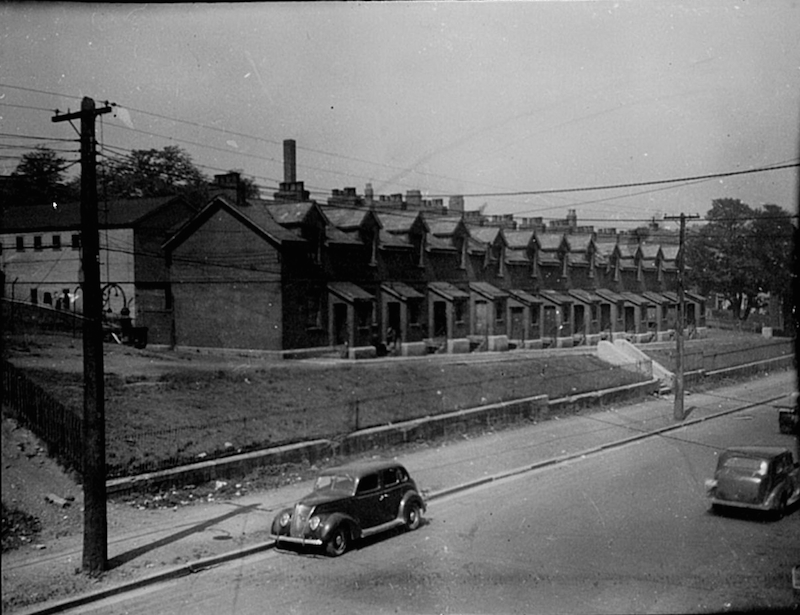 People living in the Twelve Apostles have been evacuated, and won’t be allowed to return their homes for up to two weeks. The historic buildings are the former Churchfield Barracks, built in 1903, and sit immediately adjacent to 5426 Portland Place, the building that was destroyed by fire Sunday.

Yesterday, I quoted from Twelve Apostle resident Christine Davison’s Facebook page. Later in the day, she wrote to clarify that she did not speak directly with the Metledge family, who owned the burned-down building, about the smokestack on the building, although she did talk “with staff at National Art to have the Metledges contact me about it (who knows if they passed the request) and had Heritage Gas pass along the message (as it was all they could do).” Further, she “contacted by-law and the fire department and the city and the province in various ways.”

As I was exchanging messages with Davison, she interrupted the conversation to say that she was again, at that very moment, being evacuated from her house. So I headed over to see what was up. A police officer was out on Brunswick Street talking to residents, so I listened in. The officer told residents the Twelve Apostle site had been released by the Fire Department but was then in the hands of the insurance company. This made no sense at all to me, so I politely waited for her to finish, identified myself as a reporter, and asked what was going on. “We already talked to the media,” she said, and refused to talk to me. I walked around the corner and there were three fire department brass talking to each other, so I again identified myself as a reporter and asked what was going on. “We haven’t talked to the media yet,” one of them said. I was caught up in the stupid and asinine culture of needless bureaucratic secrecy.

Look, I get that there are times and good reasons for police and even fire department secrecy, but this wasn’t one of them. Nobody was going to get hurt. There wasn’t an active police or fire incident unfolding. There were no privacy issues involved. Just, people were being evacuated from their homes one day after a fire. How come? Would it hurt a public employee to be human? To talk?

You can read elsewhere why the Twelve Apostles were evacuated, but for me the story is no longer about the evacuation but about the stupid and asinine culture of needless bureaucratic secrecy.

Yesterday, the Examiner revealed that there has been a major management shake-up at the Centre for Entrepreneurship Education and Development, and that the agency is exempt from the normal government controls that apply to other government-funded economic development efforts. The article is behind the Examiner’s pay wall, and so available only to paid subscribers. To purchase a subscription, click here.

Somebody is passing phoney US currency around town. Pro tip to gullible Canadians: Ronald Reagan is not on the money.

Costs of demolition of the high school have increased from the projected $3.5 million to $4.5 million, the CBC reports.

There’s a herd of feral horses in West Hants County. The horses have “roamed the Fundy Gypsum lands in Sweets Corner freely for decades,” reports the Advertiser/Register.

1. What I Learned About Graham Steele, pt. 1

Former NDP MLA Howard Epstein wrote a review of former NDP MLA Graham Steele’s book, and Epstein gave me permission to publish his review in the Examiner. Read it here.

2. What I Learned About Graham Steele, pt. 2

Greg Beaulieu complains that Epstein stole the title of his, Beaulieu’s, own review of Steele’s book.

Just because we need more old white dudes writing about the same stuff, I’ll have my own review of Steele’s book up later today.

Parker Donham takes Mayor Mike Savage to task for not being as forceful as he could be on the accessibility front.

Audit & Finance Committee (10am, City Hall)—The city will eat $706,000 that the province had committed to paying way back in the John Hamm years. Explains a staff report:

In November 2003, Transport Canada announced that HRM’s proposal for the $13.3 million Bus Rapid Transit system was one of several projects across the country to receive funding under the Urban Transportation Showcase Program. Funding Contributions included $8.4 million from the Halifax Regional Municipality; $4.1 million from the Government of Canada; $786,000 from the Province of Nova Scotia; and $25,000 from the Ecology Action Centre. Premier John Hamm said “By working together to make commuting a more attractive, convenient option, we’re making a significant impact on the environment and our quality of life in Nova Scotia.”

In July 2004, the Contribution Agreement between The Government of Canada and the Halifax Regional Municipality was approved. The term of the agreement commenced on July 21, 2004 and ended on March 31, 2008.

Upon a review of open projects in April 2013, it was discovered that the Nova Scotia Department of Energy paid $80,000 to HRM in fiscal year 2003/04, without an invoice being sent, and the $706,000 committed by the Nova Scotia Department of Infrastructure Renewal had never been received. Final payment from Transport Canada occurred in fiscal year 2007/08.

An invoice was sent to the Nova Scotia Department of Infrastructure Renewal in April 2013 and correspondence took place between HRM and the Province. The end result is that the Nova Scotia Department of Infrastructure Renewal is not willing to pay the outstanding cost sharing due to the fact that there was never a contribution agreement negotiated with HRM once it was approved by Transport Canada and that since it has been over 10 years since the letter of commitment was sent, their funding is no longer available.

As the Province has refused to pay the invoice, we are asking for approval to write off the Accounts Receivable.

Yep: nearly three-quarters of a million dollars slipped through the cracks at City Hall, and the loss wasn’t discovered for a decade.

East Coast Literary Awards (7pm, G. Peter Wilson Room)—The three short-listed finalists will read from their respective books: John DeMont, A Good Day’s Work; Richard Foot, Driven; Stephen Kimber, What Lies Across the Water. The G. Peter Wilson Room is that middle room with the couches and bookshelves on the second floor of Alumni Hall. When I’m on campus, I sometimes slip away to the room to take a nap. No one seems to mind.

Atlantic Cartier to Liverpool, England
Balmoral to sea
Explorer Of the Seas to sea

Earlier this year, the Explorer of the Seas, now in port, had to cancel a cruise mid-cruise when 564 of the 3,050 passengers onboard came down with the norovirus.

The Balmoral, also in port today, has its own unlucky history. In 2009, the passenger-laden ship was attacked by pirates. Later that year, The Australian newspaper dubbed the Balmoral “the cursed ship of the high seas” after three separate bouts of norovirus. In 2010, an 80-year-old passenger disappeared from the ship, and in 2011 another elderly passenger went missing.

Two hundred and thirty-nine people have gone overboard from cruise ships since 2000.

TCL is going to “upgrade” the washrooms at the $45 NSF Fee Centre.