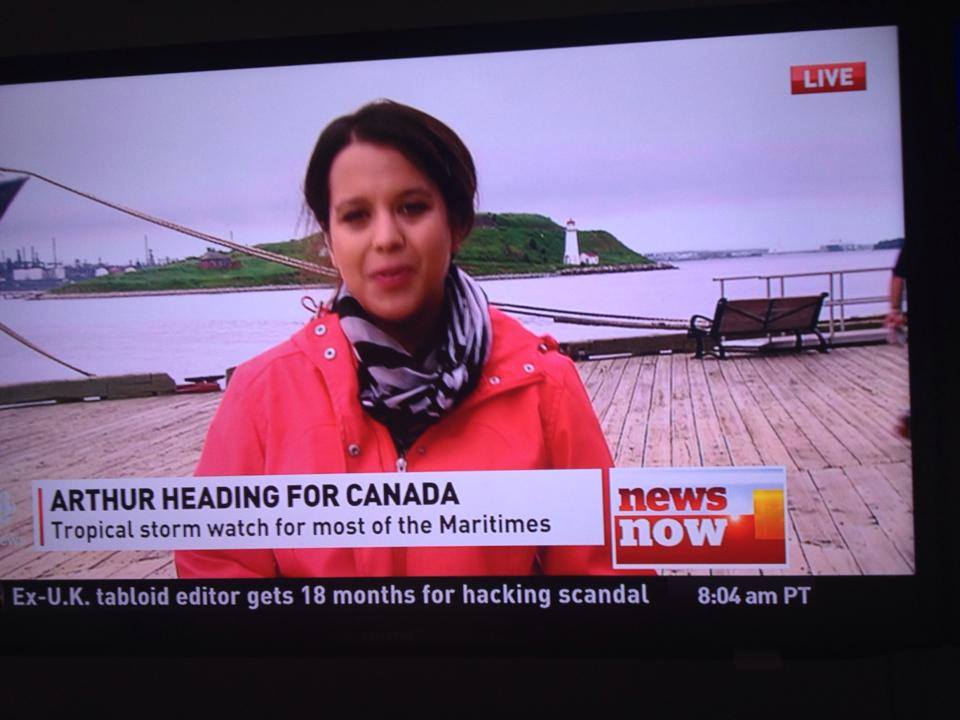 CBC reporter Anjuli Patil was sent out to the boardwalk yesterday to tell us it wasn’t raining.

Good on CTV for at least acknowledging the issue, but the lack of access to abortion services in New Brunswick is the most-undercovered story in Canada. Alone among Canadian provinces, New Brunswick says abortion is not an “entitled service,” it is the only province that has the demeaning requirement that two physicians must approve an abortion, and the provincial Ministry of Health sends women seeking abortions to religiously affiliated anti-choice “counselling” organizations. Social media is awash with horrific stories about a woman dying of brain cancer being denied an abortion, a Catholic doctor refusing to prescribe birth control, and simply the social stigma associated with seeking reproductive health in the province. These stories should be looked into by skilled reporters but, alas, they’re all on duty covering an outport lobsterman tying up his traps before a weak tropical storm arrives.

An Examiner report. It’s behind the paywall, but you can subscribe here.

The province has created a new position for a prosecutor to focus on workplace safety investigations, and hired Alex Keaveny for the job.

A review panel calls for revising the rules around fish farms.

The Canadian agencies that regulate companies traded on the stock market, including the Nova Scotian Securities Commission, is proposing a new rule that would require corporations “to make disclosure regarding the representation of women on their boards and in their executive officer positions.” There’s no proposal to require actually appointing more women to the positions, but counting them is a good first step. And, neither here nor there, but it’s ridiculous that Nova Scotia has its own securities commission; these things should’ve been amalgamated nationally decades ago.

The always erudite Rachel Brighton looks at the issue of temporary foreign workers at fish plants. I think the conversation is missing the larger picture, however: while plant workers are paid crap wages and lobster fishers get a measly three bucks a pound, the execs and owners are making out like bandits. Clearwater’s, John Risley, for example, is a billionaire. I was at the property office yesterday researching something else, but out of idle curiosity I looked up Risley’s holdings. He owns Big Gooseberry and Little Gooseberry, two islands connected by a causeway off the coast near Chester, assessed at just over $3 million. I’m sure Risley is a decent enough guy, a hard worker, and cleverly earned his fortune, but there’s something fundamentally wrong with the industry when one man makes billions and the pay for the thousands of people actually catching and processing the product is a pittance.

Darce Fardy continues to chronicle his dementia and the struggles that come with it in his Chronicle Herald column. A seasoned journalist, Fardy became the province’s freedom of information review officer, and then formed the Right to Know Coalition. He’s done more than anyone to bring better public access to Nova Scotia government, although the bureaucracy has resisted at every step. There’s still a long, long way to go on the freedom of information front, but Fardy is still the expert, and the inspiration for continuing the fight. Besides all that, he’s a great guy.

(Click on vessel names to see pictures and more information about the ships.)

Cruise ship Pearl Mist ,now at Pier 23.  was built by Irving Shipbuilding in 2009, marred by legal wrangling, and is now on her inaugural cruise season. You can read about the various law suits here.

Closed due to the apocalypse.

In late February, the Halifax Regional Police Department announced it had asked the Service de police de la Ville de Quebec to undertake an “operational review” of the Halifax police investigation into the death of Holly Bartlett, the 31-year-old woman who was found dying under the MacKay Bridge in 2010. That review, the police said in February, would “take approximately two months to complete.” Two months later, when I got back from vacation in late April, I called and asked about the review; I was told that it would be another month. In May I called again, and was told it would be late June. This week I called yet again to ask about it, and was told that the Quebec cops are consumed with operations related to the Festival d’été de Québec, expecting riots and so forth, so the Bartlett investigation is delayed yet again. The repeated delays must be a stress for Holly’s family and friends.