You are here: Home / Featured / Anti-maskers bring their misinformation to Halifax 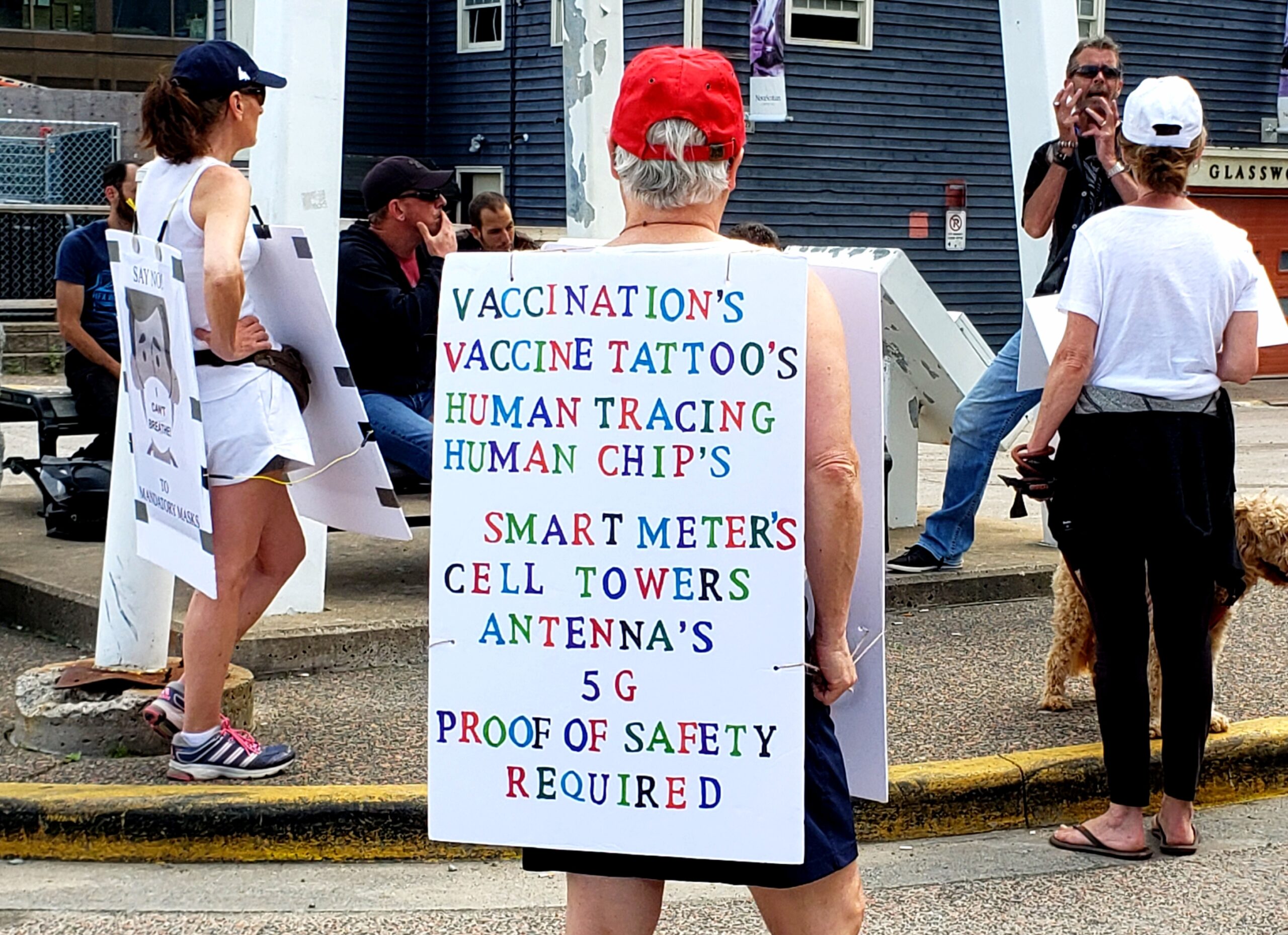 A dozen anti-mask protesters who gathered on the Halifax Waterfront Sunday afternoon were met by an equal number of mask-wearing counter protesters determined to push back on the messaging.

March to Unmask: Halifax was organized by Sandra Saunders and was part of a nationwide campaign against what the unmasking group is calling an “unjustified push” for mandatory masks. In addition to protesting masks, one brandished an anti-vaccine and anti-5G technology sign and another noted that ‘Bill Gates won’t save you.’

Shortly before the 3 p.m. event started, a group of mask-wearing counter protesters showed up on-site with signs of their own. As Saunders spoke to reporters, they began raising their own signs and shaking homemade noisemakers. 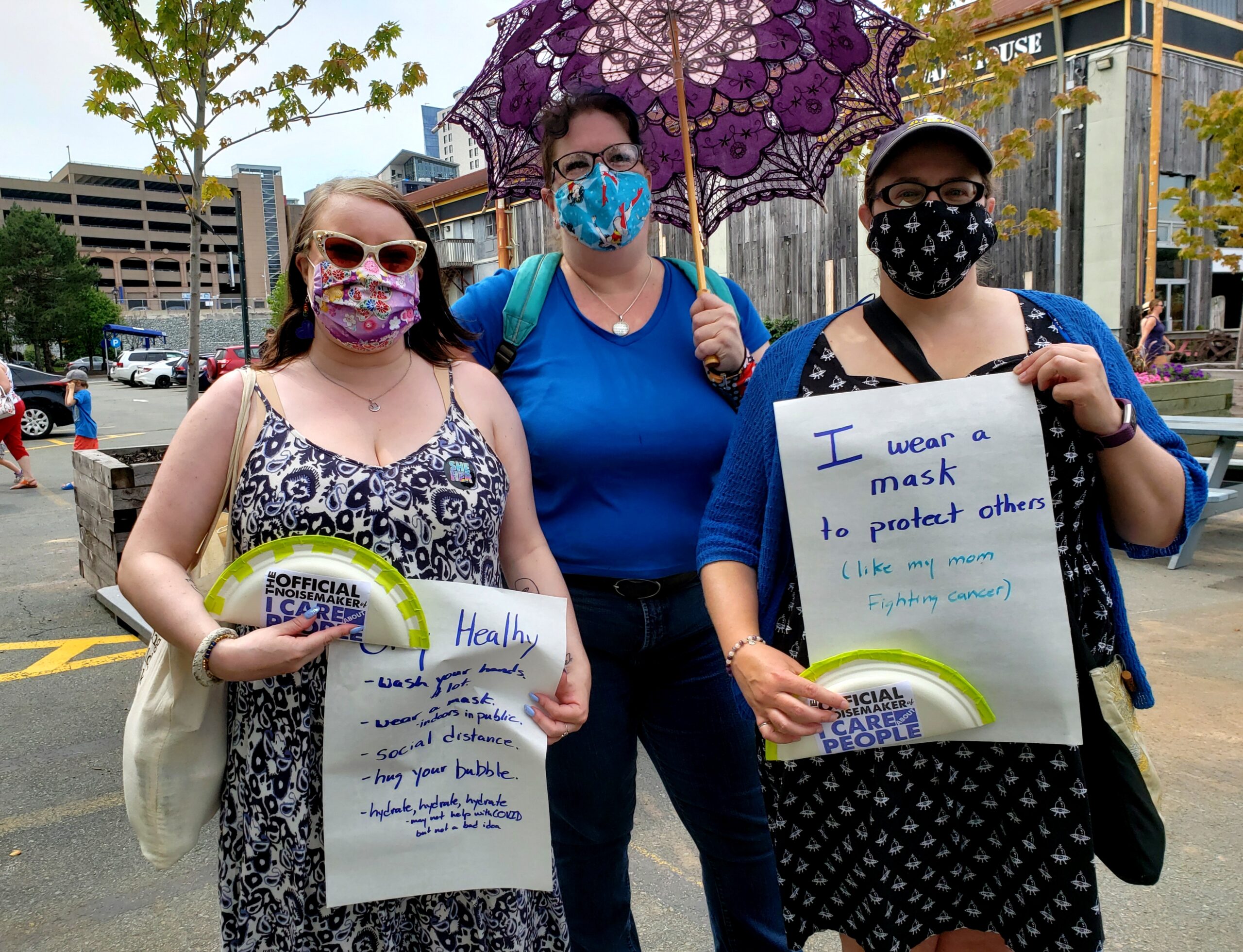 Veda Wynters (centre) was one of a dozen mask wearers who showed up to counter Sunday’s “unmask Halifax” event. Photo: Yvette d’Entremont

Halifax resident Veda Wynters was one of those who showed up to counter the anti-mask group. Sporting a Wonder Woman mask, she said she felt compelled to show up.

“I decided to come here after reading all the comments on their (Unmask Halifax) Facebook page that has outdated numbers, incorrect information, conspiracy theories up the wazoo, and we just wanted to represent the saner side of Halifax,” Wynters said.

One of the other women who joined her added that mask wearing was about compassion for other people and she too felt they needed to push back.

“It’s not really for your protection, it’s for other people and it just infuriates me that there are people that wouldn’t have that same compassion that all of these lovely people have,” she said, gesturing broadly to the people wearing masks around her.

Both groups were generally respectful and calm, with the exception of one man aligned with the anti-mask group. He angrily yelled at a CTV cameraman for not interviewing him and got into a heated yelling match with two mask-wearing teenagers.

In an interview, Saunders said she became involved with organizing the March to Unmask Halifax event because her daughter is asthmatic and works in an industry that recently made them mandatory. She said she wanted to create awareness about what the group claims are the harms caused by masks.

She added that people shouldn’t be listening to what mainstream media or the government has to say about wearing them during this pandemic.

“We should never, ever be mandated anything, especially a medical device that poses harm…Especially cloth masks. Cloth masks, when you have the moisture from your breath coming out, your C02 is actually your waste product,” Saunders said in an interview, pointing to this reporter’s cloth mask.

“Seriously. So it’s kind of like eating your own poop, man, you know, because seriously the CO2 has virus and bacterial particles that your body is trying to expel and get rid of.”

This is not accurate, and contrary to the scientific consensus on masks.

‘Super majority of Canadians’ are onboard

The fact that so few people showed up for a protest against masks was no surprise to Howard Ramos. The former Dalhousie University sociology professor recently took up a new post as chair of sociology at Western University.

He’s worked with the Association of Canadian Studies and their polling with national market research and analytics company Leger. Last week, Leger released a survey that showed 67% of Canadians believe wearing a mask in all indoor public spaces should be made mandatory.

When asked if requiring people to wear a mask in public places is an infringement on their personal freedoms, 70% surveyed disagreed.

“The super majority of Canadians believe in the public health practices that have been happening and recognize that we’ve sacrificed a little bit of our freedom in order to have more freedom,” Ramos said in an interview.

“Wearing a mask gives us the opportunity to be able to go shopping, to be able to make sure that our friends and relatives and neighbours aren’t getting sick.”

He said there will always be a minority who aren’t supportive, adding that those who are unsupportive often hold extreme alt-right views.

“I think that we’re importing some of the narrative from the US, and within political views there’s always a chunk of the population who prides liberty and libertarian values over other values,” he noted.

“So to me as I hear about this kind of event it’s to recognize that yes there’s going to be this kind of group of people. It’s not new, it’s something that always exists within society, but it’s important for us to put it into context that this is a minority of people.”

Ramos said public health officials have done a “great job,” particularly in Atlantic Canada, with informing the public about why they’re implementing various measures in order to protect the health of the community at large.

“I think that what ends up happening with a lot of the anti-vaxxers and the alt-right and why they often pair together is because of this prizing of individuality,” he said.

“If you look at Atlantic Canada, we’ve done very well because we’ve embraced the messaging from public health, and it’s important to remember that this is going to be a long term marathon that we’re running and that it’s not over.”

Misinformation and downright mistruth being circulated about masks

On Friday, Nova Scotia’s chief medical officer of health announced that non-medical masks will become mandatory on public transportation as of July 24.

In a media briefing he stated that evidence around wearing non-medical masks has evolved throughout the pandemic. That evidence now clearly shows that non-medical masks are an effective tool in helping to prevent the spread of COVID-19. He added that before a second wave or resurgence of the virus, we need to normalize mask wearing and make it “much more of a habit” for Nova Scotians.

Strang also stressed that the vast majority of Nova Scotians are able to wear masks. He said although there are exemptions for medical reasons, there are very few valid medical reasons to not wear non-medical masks and they are primarily related to anxiety.

“The Canadian Thoracic Society clearly states that there is no evidence that wearing a non medical mask worsens a chronic lung condition such as asthma or chronic obstructive lung disease,” he said.

“But I do recognize that for some people with chronic breathing conditions wearing a mask can create anxiety.”

He urged people to try and overcome that anxiety by getting used to wearing masks for short periods in a safe environment, such as in the confines of their own homes. He also noted that while people with cognitive or developmental disabilities may also be unable to wear masks, there are “very few medical reasons” not to.

“So if you think about it we have medical professionals that wear masks all day long every day. So what I’m asking is that Nova Scotians wear non-medical masks for much shorter periods of time,” he said.

He also encouraged Nova Scotians to seriously think about the role masks play in helping us protect each other, adding that wearing masks in public spaces where physical distancing isn’t possible shows that you care about others and are taking a relatively simple step to keep them safe.

“There’s a lot of misinformation and downright mistruth being circulated about masks. Wearing a non-medical mask is safe and effective,” he said. “Our response to COVID-19 has highlighted that in many ways we need to think more about putting others first ahead of ourselves.”

Strang also noted that face shields or other types of eye protection are not a replacement for masks as they don’t protect others.

Last week, the Centers for Disease Control and Prevention (CDC) in the US called on Americans to wear masks to prevent COVID-19 spread.

“CDC reviewed the latest science and affirms that cloth face coverings are a critical tool in the fight against COVID-19 that could reduce the spread of the disease, particularly when used universally within communities,” the CDC states in its press release. “There is increasing evidence that cloth face coverings help prevent people who have COVID-19 from spreading the virus to others.”