Mondays in the summer are always slow on the news front, and today is even slower than usual. Media outlets are putting up nonsense and almost meaningless things as local “news.” The Chronicle Herald has a photo of people working out on the waterfront. The CBC looks at people selling smart phones on Kijiji. Metro publishes complaints from a city councillor that unnamed people in an unnamed neighbourhood are concerned about unnamed group homes. The Canadian Press is making a big deal about a statistically insignificant increase in incidents in group homes (Lacking real news? Bash on the neediest in society.) CTV covers a firefighter competition. Global interviews an old dude playing softball.

Gotta feed the beast, I guess.

For myself, I’m going to spend the day researching stuff in the courthouse. If I find anything interesting, I’ll let you know. If not, I won’t publish anything at all.

Privatizing Service Nova Scotia “is about making the books look good, and eliminating as many public sector workers as possible before the next provincial election,” explains Stephen Kimber:

When the Manitoba government did what the Nova Scotia government is poised to do, its private sector partner absorbed the cost of the upgrade, paid the government a $75-million signing bonus and promised to pay annual royalties of $11 million, rising to $24 million by the end of the 30-year deal.

The other option would be to upgrade through the public sector and pay off the cost in installments. Let’s do the math: Nova Scotia could borrow $40 million at today’s low interest rates, and pay the cost off over time and continue to net close to $85 million or $90 million annually instead of, well — tops — $24 million.

But borrowing would add to the appearance of provincial debt (bad) while the $75-million private-sector signing bonus could help government magicians make the deficit appear to disappear in the lead-up to a provincial election (very good).

Despite a spate of recent incidents, the violence rate in Halifax is dropping, says John DeMont:

Statistics Canada’s crime-severity index measures not just the volume of crime but how serious it is.

The latest calculations, which came out last week, put Halifax’s crime-severity index for 2014 at 65.7, less than the Canadian average, but in 13th place among the 32 “census metropolitan areas” that Statscan looked at in the study.

But consider this: just four years earlier, the Halifax index stood at a whopping 96.8. In 2007, the first year that the national statistical agency started calculating the measure, it was nearly 10 points higher.

“Serious crime been going down since the early 1990s across North America,” he says.

This is not a case of “juking the stats.”

There is a media-driven perception that crime is rampant. This is because consultants urge broadcasters like the CBC to adopt “if it bleeds, it leads” policies, and cash-stripped newsrooms find it easier to rewrite police press releases than to do independent reporting, as I wrote last year:

Some things are called “crime,” and some things aren’t. It’s easy to do a bunch of one-off stories about buddy who got wasted and did something stupid: the police give you the release with all the details and are more than happy to have their spokespeople talk to you. Buddy who got wasted is probably ignorant and poor, and doesn’t have the resources to challenge you, so you can just point and laugh.

But the real crimes often happen in corporate boardrooms and government offices, and nobody is handing reporters the details. They have to be ferreted out, by hard work. And you’ll be going up against some smart, resourceful people with the means to challenge you.

It’s easy to beat up on ignorant poor people. The rich and powerful, not so much. We in the news business get to decide what kind of journalism we practice.

These media shortcomings result in a proliferation of stories about crime. In fact, however, no matter how you slice the evidence or spin the stats, violent crimes rates are indeed plummeting across not just North America but the western world generally, and every place in the rest of the world that isn’t embroiled in civil war and instability.

DeMont goes on to make some meek suggestions about what might explain the drop in violent crime — no, changes in policing tactics and budgets have very little, if anything, to do with it.

I’m surprised DeMont didn’t mention the leading theory for the drop in crime: removing lead from the environment. In this Mother Jones article, Kevin Drum rejects the kinds of explanations Schneider puts forward, then reviews the evidence:

During the ’70s and ’80s, the introduction of the catalytic converter, combined with increasingly stringent Environmental Protection Agency rules, steadily reduced the amount of leaded gasoline used in America, but [researcher Jessica Wolpaw] Reyes discovered that this reduction wasn’t uniform. In fact, use of leaded gasoline varied widely among states, and this gave Reyes the opening she needed. If childhood lead exposure really did produce criminal behavior in adults, you’d expect that in states where consumption of leaded gasoline declined slowly, crime would decline slowly too. Conversely, in states where it declined quickly, crime would decline quickly. And that’s exactly what she found.

Meanwhile, [consultant Rick] Nevin had kept busy as well, and in 2007 he published a new paper looking at crime trends around the world (PDF). This way, he could make sure the close match he’d found between the lead curve and the crime curve wasn’t just a coincidence. Sure, maybe the real culprit in the United States was something else happening at the exact same time, but what are the odds of that same something happening at several different times in several different countries?

Nevin collected lead data and crime data for Australia and found a close match. Ditto for Canada. And Great Britain and Finland and France and Italy and New Zealand and West Germany. Every time, the two curves fit each other astonishingly well. When I spoke to Nevin about this, I asked him if he had ever found a country that didn’t fit the theory. “No,” he replied. “Not one.”

Just this year, Tulane University researcher Howard Mielke published a paper with demographer Sammy Zahran on the correlation of lead and crime at the city level. They studied six US cities that had both good crime data and good lead data going back to the ’50s, and they found a good fit in every single one. In fact, Mielke has even studied lead concentrations at the neighborhood level in New Orleans and shared his maps with the local police. “When they overlay them with crime maps,” he told me, “they realize they match up.”

The evidence isn’t conclusive — it’s impossible to retroactively prove a direct cause and effect, and it’s beyond unethical to run a study to test the theory — but the removal of lead from the environment is a better explanation for the stunning drop in crime over the past two decades than any other I’ve seen.

I can’t help but wonder what other pollutants have effects on the human brain and society generally, and, as in the case with lead, we’re not even aware of it.

I don’t know which is more insulting to Cape Bretoners, or all Canadians for that matter — the proposed war memorial destined for Green Cove, or the renaming of the Glace Bay Armoury to Dr. Guglielmo Marconi Armoury.

(Editor’s note: In 1902, Marconi, while based in the Glace Bay, transmitted the first wireless message to cross the Atlantic from North America.)

After leaving North America, Marconi returned to Italy where in 1923 he joined the Fascist party.

In 1930, Italian Prime Minister Benito Mussolini made him president of the Royal Academy of Italy, which made Marconi a member of the Fascist Grand Council.

Canadian and Allied military suffered many casualties freeing Italy from the black-shirt Fascists. Some of those Canadians were from the very neighbourhood where the Armoury is located. Would it not be more appropriate to name the military station in remembrance of those men rather than one of Mussolini’s protégés?

Districts 7 & 8 Planning Advisory Committee (4pm, Room 301, Halifax Central Library)—other city meetings have been cancelled for today because it’s a Monday in the summer, so don’t get your hopes up that this meeting actually happens. If it does, the committee will discuss a proposed four-storey building at Oxford and Young Streets. 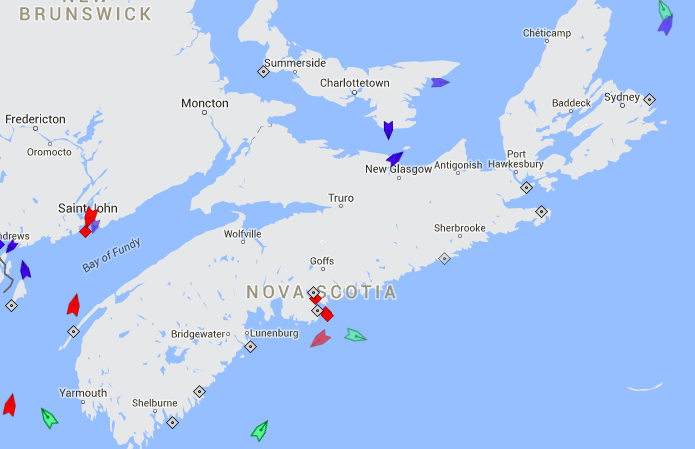 Atlantic Conveyor, container ship, New York to Fairview Cove
John J. Carrick, barge, from parts unknown (by me; the people on it presumably know where they were) to McAsphalt
Fritz Reuter, container ship, Lisbon to Pier 42