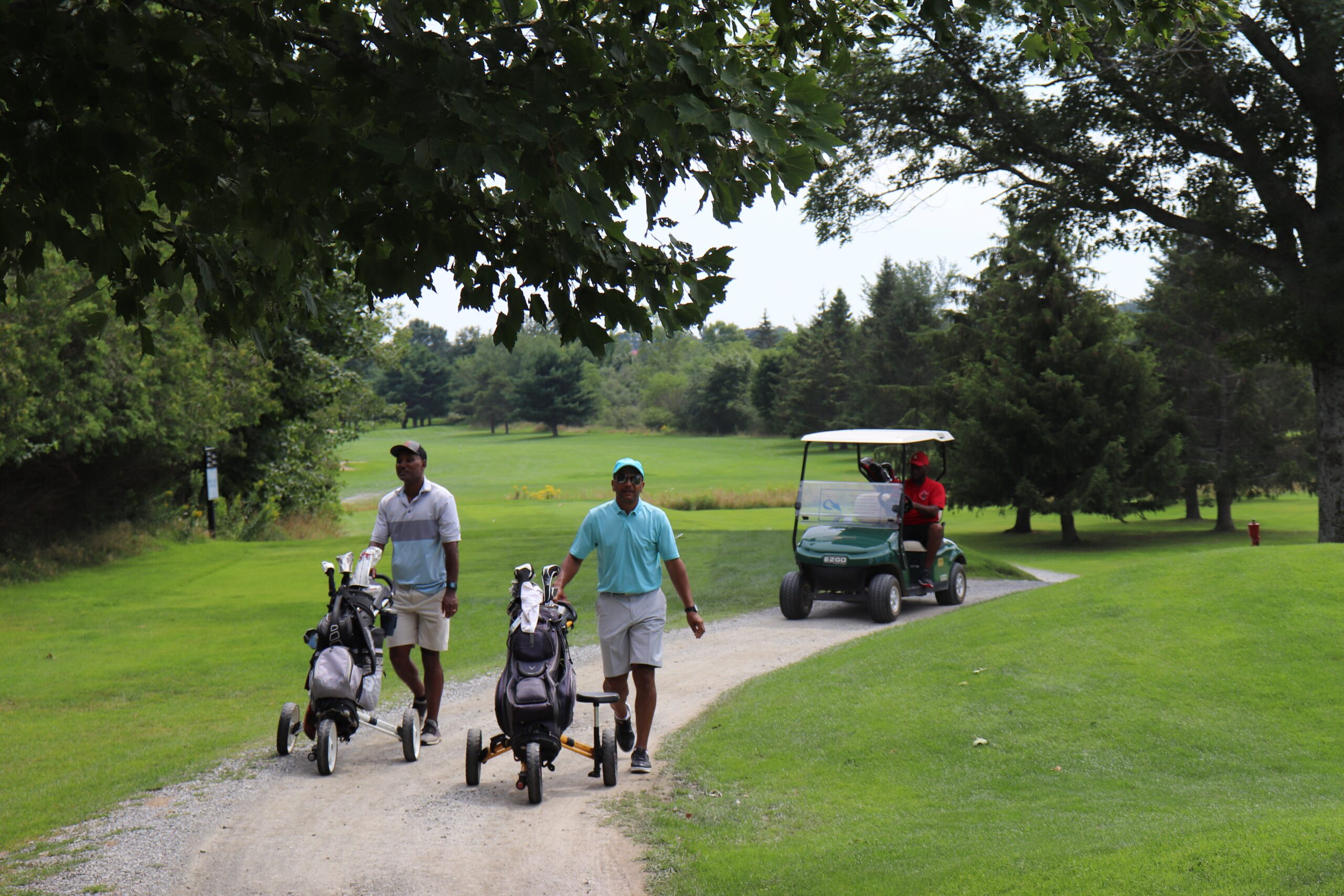 Now in it’s 47th year, The Apex Invitational Golf Tournament (“Apex”) in Truro returned two weekends ago after being cancelled last year due to COVID-19.

Second only to the African United Baptist Association’s (AUBA) annual general meeting, Apex is one of the longest-running annual gatherings of Black people in all Atlantic Canada.

Apex was started by a former Truro resident Darrell Maxwell in 1974. It was originally called The Black Golf Tournament and had just under a dozen Black golfers.

“One guy was sayin ‘I’m better than you,’ other guy sayin’ ‘Oh no, I can beat you.’ So Darrel said, ‘Well … why don’t you guys have a golf tournament and see who’s the best?’” said Kevin Jackson, chair of the Apex Invitational Golf Association.

“So, that’s what they did. Just for the bragging rights.”

The tournament has grown to include more than 100 golfers.

What started out as a friendly tournament among friends is now an annual homecoming for Truro’s Black community.

“It is about reconnecting with friends and family, but most importantly it is about community, our collective Black community that touches all parts of Nova Scotia and beyond,” said Wayne Talbot, Truro deputy mayor and Apex committee member.

The origin of Truro’s Black community dates back to the late 1700s when the Black Loyalists first started arriving in Atlantic Canada, following the American War of Independence. 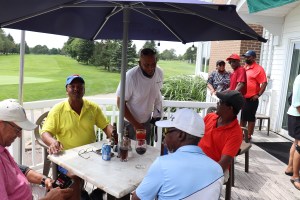 “We had the Friday night dance, and the Saturday dance, and the Sunday barbecue, and the ballgame, and all that stuff there. It’s like a reunion for the entire week,” Jackson said. “Because people start coming in on Tuesday and Wednesday of the Apex, and they have the practice rounds, then we have sitting down for a few beers at this one’s place or whatever.”

Every year, Apex takes place the first weekend of August. Last year, in its absence, Tamara Tynes Powell and her husband, Lester, held a small get-together to commemorate the annual event.

“I needed to have something in the absence of such an important event that our community has had now for over 40 years,” Tynes Powell said “It was really sad to not feel that family connection and togetherness that we’re used to feeling every year. And to me, even if we could only have 15 or 20 people in a backyard and follow COVID restrictions, was better than not doing anything at all.”

“It’s part of our existence here in Truro and we have so few events that really draw the community home anymore. So, Apex isn’t just a golf tournament, it’s also a community homecoming.”

“It’s a homecoming for The Island, Hill, and The Marsh,” she said in reference to to Truro’s three historic Black neighbourhoods. “The people from away just make a big effort to get home, even if they don’t golf, just to mingle with family and friends in an environment that allows them to visit the most amount of people in the shortest amount of time.”

Though events such as the meet-n-greet, nightly dances, community baseball game, and Sunday picnic were all still on hold, the tournament itself, a karaoke fundraiser, and an award banquet ceremony with restrictions all went ahead.

At the banquet, Saturday, Talbot, honoured Jackson for his work as chair of the all-Black, nine-member Apex Invitational Golf Association committee.

“Let me state the obvious: all members of our committee are stalwarts, give generously of their time, and are always prepared to step up and do what is asked of them,” Talbot said. “This recognition of Kevin’s labour is not meant to diminish the contributions of others, but rather to highlight the immense value that Kevin brings to our committee.”

“In our collective and measured opinion, Apex would not have survived the COVID-19 pandemic if it were not for the focus that Kevin brought to the table. In particular, he scheduled meetings, developed agendas, and lead discussions with respect to the 2020 event. He encouraged us not to cancel the tournament until it became abundantly clear that COVID had won. Apex is not a task for Kevin; it is a passion and a calling.”

Chairman of the board

Kevin Jackson speaks after being honoured at the 2021 Apex banquet. Photo: Matthew Byard.

This year marks Jackson’s 30th year as committee chair. In 2017, Jackson retired from his job at the Department of Fisheries and Oceans Canada. In 2019, Jackson and his wife, Terry, moved back to Truro and built a new house on his old family homestead on The Island where he grew up. He said that physically living back in Truro made it easier for him to organize.

In his role as chair, Jackson said there are several tasks he is responsible for, including organizing the scholarship fund, the email database, and committee meetings. He told the Examiner about the challenges in planning the event.

Jackson said that after initially wanting to hold off in April, they had a few more meetings before the writing on the wall was clear.

“Then mid-May came, we had a meeting, I said ‘Well OK, you guys are right. We have to cancel.’ … And we couldn’t make the decision at the last minute.” 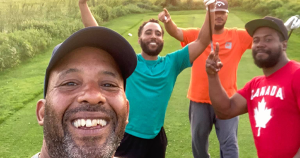 Apex has grown not only in size but also in scope. On the course, Apex now has not only multiple men’s divisions including a men’s senior division, but it has also grown to include both a women’s nine-hole and 18-hole division as well.

“The invitation to women wasn’t even thought of,” Jackson recalls.

Off the course, a grassroots Black community group, Community Enhancement Association (CEA), now oversees an initiative that started out as the Apex Community Fund.

Jude had this idea, and what we did was that if there were certain individuals up here, in the majority of the case it may be a single parent Mom or Dad, and if their son or daughter wanted to take, say, piano lessons, and they didn’t have the money, they would come to us with a submission, and we would pay for the piano lessons, as an example.

As submissions started coming in “left and right,” Jackson said it started to become too much additional work for the Apex committee to continue to manage.

With the CEA already in operation and doing similar work, Jackson said he figured: “Let them manage it and what we will do each year is … based on the monies we’re bringing it, gift them up to $2,000 a year.”

Since 1999, the scholarship fund has awarded more than $100,000 to postsecondary students from Truro’s Black community.

“There’s three people. And they’re the ones that, you know, talk to the students, take in the applications, review the applications, looking at the essays, and determine what each student is going to get,” Jackson said.

Harold “Butch” Borden is an Apex committee member and former teacher who heads the scholarship fund subcommittee. He is credited for much of its success.

“Every year I was connected to the school system so, it just made it easier for me to get in contact with the kids and make sure they were aware of the possibility of a bursary,” Borden said.

“We don’t just dump the money on the kids and say ‘Here you go, have a nice life.’ One of the things we tried to impress upon them was that we were going stay connected to them and kind of, you know, track what they were doing, and how they were doing, and we wanted to make ourselves available to them in case they had any problems.”

Borden said that among many donations and fundraisers, the four main contributors to the fund are the golfers, local car dealership Pye’s Chev Olds, IG Wealth Management, and an annual karaoke held in memory of community member Kim Paris.

Despite the celebrations and tournament being held off last year, the annual scholarships were still awarded.

“I guess basically, good fiscal management is responsible for us being able to give out scholarships last year. And when [people signed up for the tournament] last year, some people did make some contributions and just kind of left it there and said, ‘Hey, the tournament [will be back] next year, no reason why we can’t contribute this year also.’”

Jackson also said that some golfers who cancelled in 2020 and didn’t play in 2021 still opted to have their registration fees transferred to the scholarship fund.

As planning for this year’s Apex got underway this past spring, the logistics surrounding restrictions for the Saturday night banquet ceremony became further complicated by a third wave of COVID-19 in Nova Scotia.

“So, then they said, ‘Well you can have the second room if you need it, but there’s no interaction between the two rooms.’ So that’s where we put the students, and the parents, and a few others.

At the banquet, in addition to Jackson, community member David Jones was awarded for volunteer work in the community.

Prizes were awarded to the top 10 golfers in each of the men’s 18-hole divisions, the senior men’s nine-hole division, and the women’s division.

Six students were also presented with $1,000 bursaries through the scholarship fund.

When asked for comment about Jackson’s surprise honouring, Shelley Borden said, “We just thought that Kevin does a lot of behind the scene work. And he’s almost like the main spoke that keeps the wheel turning. And he is, excuse my language but, hellbent that the Apex is going to continue as long as it can no matter what he has to do to make it happen.”

The Apex committee intends to hold a more back-to-normal version of Apex in 2022.

“When you look at the history of it and where it came from, as a grassroots organization,” Butch Borden said, “I don’t mean to blow our own whistle but it’s done pretty well.”

* This information was added after publication.