Pegasus Amateur Boxing in Middleton is facing an increase in rent it can’t afford, so will likely close. Boxing was once a big part of the Nova Scotia sporting scene, but seems to be disappearing.

When I lived in California, the annoying people would get up early (i.e., before noon) on New Years Day and walk over to One Mile, a delightful pool built into Big Chico Creek back in the 1950s, when no one cared about building a fish barrier across an active salmon stream so long as there was a hot dog stand nearby. At the pool, the annoying people would dive in and swim the 50 metres across, then congratulate themselves for being annoying. This was one of the most ridiculous things in the world—it was California, for dog’s sake. After the swim, you could lay out on the grass and get a tan.

I’m reminded of this because as we’re approaching the global warming apocalypse, the annoying people around Nova Scotia are preparing for polar bear swims. It was, what? 20 degrees Christmas Day, and lobsters are being boiled alive in the warmer-than-ever Gulf of Maine. It ain’t exactly a sign of he-manly or she-womanly steeliness to jump into mildly tepid water, but perhaps there’s some bitter irony that the swims are named after creatures doomed to swim out their last days for lack of an ice pack to walk on.

Anyway, if you want to be annoying, you can join these annoying folks in Yarmouth. 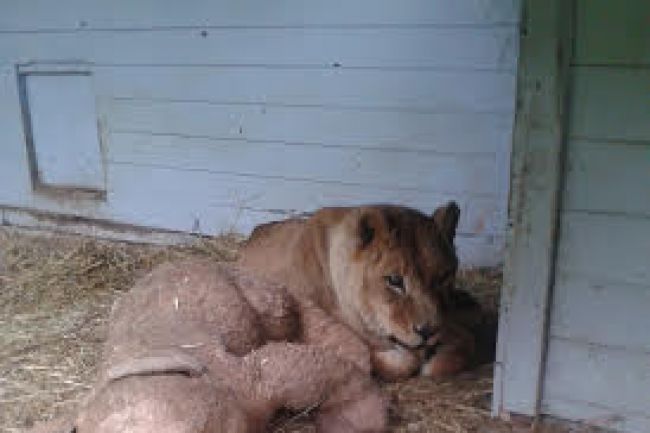 Esther, the 20-year-old lioness at Oaklawn Farm Zoo in Millville, has died.

Who knew that this place has had a veritable army of animatronics? Well, an army of three: Sunny Bear, which lived in the Sunnyside Mall; Woody the Christmas Tree, which was in the MicMac Mall up until the mid-aughts; and now Brad John’s, er, Woody, in Downsville Mall. Martina Hart, the voice of Sunny Bear, talks to Lezlie Lowe about the experience. 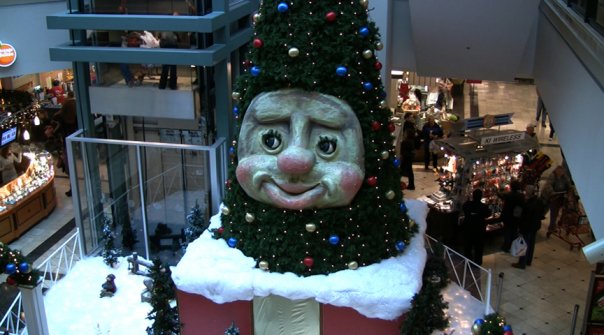 By the way, the R.I.P. Woody the Talking Christmas Tree Facebook page was started in 2007 and still exists, mostly as a target for diet pill spammers, but here and there there are some interesting posts… a sampling from the years:

I remember when I was about five or six and going to the MMM, lining up for an hour to talk to the tree and being very skeptical about just how REAL he was. Until he started talking to me. He was shaking his head from side to side and blinking oddly and never actually looking at me, but he somehow KNEW my hands were in my pockets and kept telling me to take them out. That’s when I started believing.
I haven’t thought of the tree in probably 30 years (I’m 38), but I’m sad.

O.K so tell me how Woody our most lovable landmark was costing too much money and unrepairable.. for one with all the money Woody made. give me a break GOVERNMENT of ours, stop taking our money and let us live christmas the way we should… And unrepairable, um TECHNOLOGY duh, tell me we can go from having a huge computer that no one can lift to having laptops, but we can’t repair a talking tree…. ok… well when people stop spending all kinds of money maybe we will get him back…. We love you Woody and you were the best.

Hmmm this will be the second christmas without woody in Mic mac Mall and my son who is only 5 is still asking for woody… last year he drew a pic of woody and santa at the north pole. and i mailed it to the canada post santa address…. god love the worker who opened my son’s letter because they took the time to include a hand written little note saying that woody was retired and living up at the north pole with santa. I cried when i read the letter.. my parents got choked up too. I’m 35 yrs old and i remember the little beavers and woodland animals chopping wood and the skating rink on the main floor..those memories will never be diminished… But I refuse to take my son to see “santa at his north pole spa” that is ridiculous to the extreme

For Stephen Archibald, the wrapping paper is the gift.

The New York Times is famous for reporting on the not-quite-rich-enough, people who have to unload their third house in the Hamptons in order to finance a reno in the Manhattan apartment, that sort of thing. Today, the paper of record brings us, no kidding, “What the Most Fortunate Learn During the Holiday Season,” in which the superrich tell us how they’ve found what’s important in life during the Christmas season.

For myself, the Christian mythology is impossibly complex—a virgin mother? Is it one god or three?—but at its core is a story about the utterly dispossessed finding their way in the world. The impoverished itinerant carpenter lived in a culture dominated by religious authorities who cared not a whit for the populace, in a country that was occupied by the military and political forces of a faraway superpower. There was no prosperity gospel for the carpenter; rather, he lived among the poor, the prostitutes, the sick, and they all realized that they had to take care of each other.

It’s been decades since I read it, but as I recall, the gospel of Mark relates the story of the exile into the desert best—when the carpenter and his group had to flee into the desert to avoid the authorities. The carpenter was there tempted by the very devil—if only he would turn his message of mutual support a bit in the direction for support of the power structure of the day, he’d be personally rewarded with riches. It was the biggest, most difficult temptation of the carpenter’s life, and it nearly broke him, but in the end, he stayed true to his fellow travellers.

The greatest of the biblical miracles happened in the desert—when one fish and one loaf fed the multitudes. I’ve always understood this to be a metaphor for surviving physically and spiritually through the difficult times during exile.

I don’t know if any of the biblical story is true, or if it is, whether it matters. But when I read such things as today’s New York Times article, I’m with the Occupiers: Shit is fucked up and bullshit. 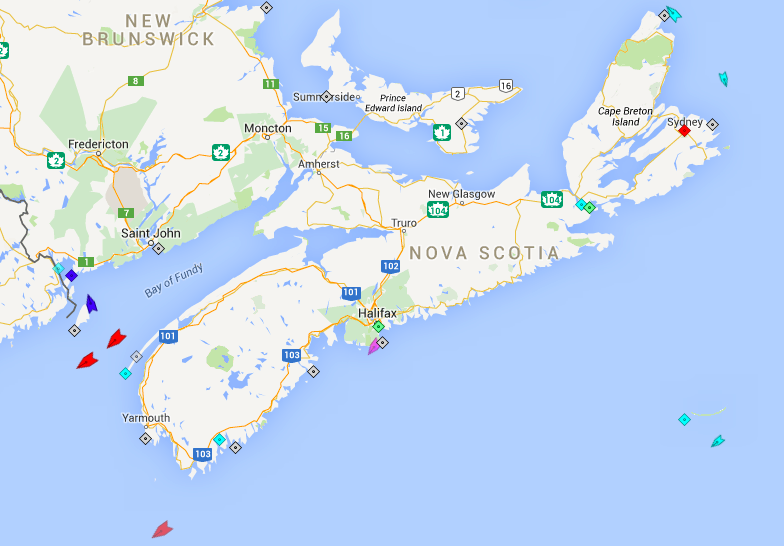 The seas off Nova Scotia, 8am Saturday. The pink boat off Sambro is the Pic Pocket, a yacht. Otherwise, there is no Halifax area traffic to report. Map: marinetraffic.com