You are here: Home / Featured / Animal neglect in Lawrencetown: Dead and emaciated barnyard critters are subject of court decision 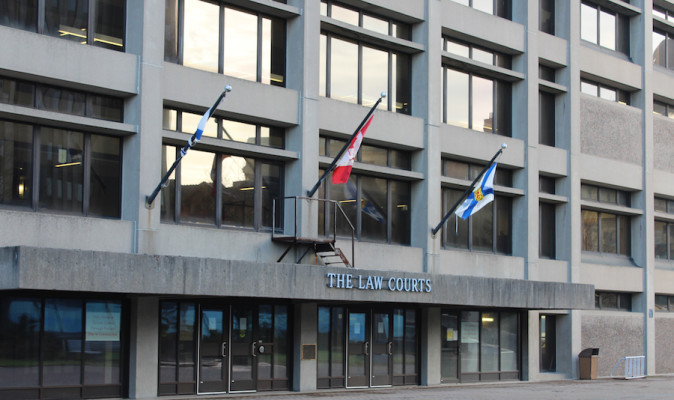 NSE inspectors were first made aware of the situation at Tynes’ farm after receiving a complaint about dead goats found under a tarp on or near the property. On that initial visit in 2017, in addition to a dead goat, the inspector also found carcasses of five llamas and four chickens. Finding dead animals on a farm doesn’t in and of itself constitute a violation under the law. But there were numerous follow-up visits, where animal cruelty was clearly evident.

On one occasion, a llama was found “downed” and unable to stand on its own. The animal was in immediate need of veterinary treatment, but Tynes was delaying the vet visit due to lack of funds. After being humanely euthanized, the necropsy report prepared on behalf of the NS Department of Agriculture determined the animal was unable to stand because it was starving and severely dehydrated, a result of owner neglect.

On other occasions, goats, llamas, horses, chickens, ducks, and a potbellied pig, were found in distress with varying degrees of emaciation and dehydration, housed in squalid conditions with cold, drafty pens, wet bedding and without food or water.

While there were occasional short-lived improvements, the directives went largely unheeded. Finally, in June of 2019, 12 animals were seized, including five llamas, two goats, and five sheep.

In July, Tynes filed a formal appeal to the Department of Agriculture’s Animal Welfare Appeal Board (formerly the Animal Cruelty Appeal Board), which hears appeals of decisions from “aggrieved persons” made under the Animal Protection Act, which is the provincial law that protects farm animals and companion animals and aims to help animals in distress.

After reviewing Tynes’ appeal, the Appeal Board decided the animals should be returned to Tynes. The NSE appealed that decision and filed a Notice for Judicial Review which was heard by Justice Glen McDougall in November of last year, and is the subject of his recent decision. Justice McDougall found the Appeal Board’s decision “unreasonable.”

According to Justice McDougall, the dispute in the matter (and what the Appeal Board’s decision seemed to hinge on) was not about whether Tynes’ animals were in distress at any given time, but rather about the interpretation of the word “pattern.”

Did Tynes’ demonstrate a pattern in mistreating and neglecting his animals? The NSE believed he did, and seized his animals. But the Appeal Board disagreed.

According to Justice McDougall, because the Act does not define what constitutes a “pattern,” in 2017 the NSE issued its own definitions in the “Seizure of Farm Animals Policy.” In part the policy states: “A pattern can be demonstrated in a variety of ways…a documented history of three or more confirmed occurrences of animal cruelty, distress, or critical distress documented with Nova Scotia Environment… These occurrences must include the issuance of written warnings and/or directives (notices) to the owner or person in charge of the animal.”

But Justice McDougall points out there’s evidence that NSE issued a total of seven notices to Tynes, dating back to 2017, meeting the policy standard of what constitutes a “pattern.” Furthermore, he points to binding case law from the Nova Scotia Court of Appeal that showed it was “incumbent on the Board to determine whether Mr. Tynes was a fit owner before ordering the animals be returned to him.”

He also points out that the “policy” set forth by the NSE should not have been “elevated to binding legal status” by the Appeal Board. The starting point for the Appeal Board should have been the Act itself, which enables inspectors to seize animals that are found in distress.

In light of McDougall’s decision, the matter has been sent back to the Board, which now must consider whether Tynes is fit to own animals and must “consider the whole chronology of evidence” beginning in 2017, to determine if they create or contribute to a “pattern.”

While animals, such as pets and livestock, are owned by humans as property, and are thus subject to certain property rights regimes, we as a society recognize that this type of property is not the same as a table or chair. Animals are living, breathing beings. They can feel pain, fear, cold, and hunger. If the animals that we care for are neglected, such as by inadequate food or shelter, they are likely to get sick or even perish. There is a reason we do not have statutes that aim to protect tables and chairs from being harmed by their owners.

Meanwhile, the matter is now back in the hands of the Animal Welfare Appeal Board for “redetermination” and hopefully this time around the Board will reacquaint itself with the purpose of the legislation that created the adjudicative body in the first place.