You are here: Home / Featured / Andy Filmore should tell us what really happened with the Cogswell Interchange: Morning File, Monday, December 28, 2015 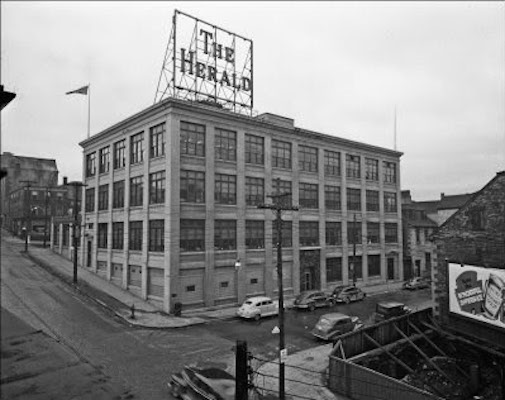 Alex Whalen, writing in the Prince Arthur Herald, a student-run paper at McGill University, laments the death spiral at the Chronicle Herald:

It began in 2009, with more than a quarter of the east coast’s largest newsroom being laid off. The second blow came last year, as a further 17 journalists were turfed. Now, just before Christmas, another proposal is on the bargaining table to get rid of 30% of what remains from the news force. In addition to this severely gutted staff, management is also taking shots at journalistic independence. They are seeking to remove seniority requirements, which would allow them to lay off whomever they please. They’re also looking to reclassify jobs so that freelancers or other employees, with no security whatsoever, would do the work being currently performed by professional, unionized journalists. Can you really ask the tough questions if you’re constantly worried about your next paycheck?

While the newsroom as been cut repeatedly, the ad department has grown. The paper’s content is increasingly produced by non-journalists re-writing press releases and producing so-called advertorials: bought and paid for content that is made to look like journalism, rather than advertising.

This is straight out bad business strategy. In the short term, a step away from journalism and toward PR can increase the bottom line. However, over time the paper loses its ability to be taken seriously. Nobody in Halifax wakes up in the morning with his coffee and thinks, “I can’t wait to open the Herald to read the press releases today.”

What they want is good journalism. They want City Hall and Province House covered, and they want a strong editorial stance punctuated by two seriously great editorial cartoonists.

Everyone in town seems to hate this. Current and former politicians are speaking out, other media outlets are (predictably) slamming the decision, and there seems to be general sympathy for the journalist’s union amongst the public. But if an enterprising corporation wants to lay off employees, what can stop them?

I don’t know what can stop them, but I do know what should: a sense of responsibility on the part of the owners, who signed up to operate a newspaper, not a public relations outfit. There is lots of good work to be done in public relations, but its objectives are at odds with good journalism.

The media are getting federal transfer payments to provinces all wrong, says Richard Starr:

As has been the case during the Harper regime, some have-less provinces (Nova Scotia, New Brunswick, Manitoba) will continue to get smaller than average increases in transfer payments in 2016-17. And true to recent form, the media paid this no heed. In a reversal of media mythology about “comforting the afflicted and afflicting the comfortable,” they focused instead on the imagined plight of the wealthier provinces whose fortunes have experienced reversal as a result of the drop in oil and gas prices.

A particularly damaging change was the move in 2014-15 to equal per capita health transfers, in which Alberta’s $1 billion windfall was paid for from the allotments to other provinces. Subsequent increases to those provinces have been applied to the lower base created in 2014-15. This has cost Nova Scotia $84 million the last three years. Per capita health transfers also meant the end of associated equalization, a device through which poorer provinces received cash to bring the value of tax points transferred in 1977 up to the national standard. According to federal public accounts, associated equalization was worth $165 million to Nova Scotia in 2013-14, the year before it was abolished.

There are worse ways to spend a snow day than reading through 15 Bruce MacKinnon cartoons.

Delorey’s fiscal update showed that this government has a major revenue problem; tax revenue from both personal and corporate income taxes are way below where they’re supposed to be, according to the spring budget, and the deficit is going in the wrong direction — as in more than $140 million more what the spring budget projected.

I know: let’s pay people less. That will get them to pay more in income taxes.

Roger Taylor un-ironically celebrates the rich among us as he chronicles the corporate buy-outs and mergers that make the rest of us poorer at every turn. Take, for example, John Risley:

Clearwater, based in Bedford, acquired Scotland’s Macduff Shellfish Group Ltd. for $187 million, including a cash payment of about $141 million and the assumption of about $8 million in seasonal working capital debt.

Management announced it would be acquiring Teco Energy Inc. in Tampa, Fla., for US$10.4 billion.

Emera said the acquisition will make it one of the 20 largest energy utilities in North America.

The money used to buy these far-flung operations come from the working people of Nova Scotia — the lobster fishers, who are not getting paid a fair wage for their catch, and the ratepayers of Nova Scotia Power, who pay among the highest electrical rates in North America. We’ve rigged our local economy in such a way that the wealth of the people is concentrated in the hands of a very few people, and those people ship the money outtahere, parking it in Cayman Island banks to avoid taxes and buying up “undervalued” (in the perverse sense of the Charles Hurwitzes of the world) companies around the globe so they can additionally steal the wealth of the people in the Caribbean, London, Florida, and wherever else they can stick their grubby hands.

Like the über rich everywhere else, the über rich in Nova Scotia are in a class war against the rest of us: they’re taking our money, shipping it out of here, and making us poorer.

Repeatedly, we’re told that our poverty is our own damn fault. If only we were more innovative and had better attitudes, we’d be better off. And we’re lectured by Ray Ivany, who pulls in a 100K a year sitting on the board of Nova Scotia Power, the company that takes our hard-earned money and ships it directly to the Caribbean.

A better approach to economic development would be to simply to keep our hard-earned dollars circulating as much of it as possible in our own neighbourhoods. This isn’t a game with secret rules, and only if we here in Nova Scotia adopt the latest and hippest buzzwords and pamper the right leeching assholes, we’ll suddenly break the code and win the jackpot. Rather, the same laws of economics always apply: If people work hard; if they’re paid decently; if their money is kept as much as possible away from the financier class; if there’s a strong sense and valuing of collective wealth; if we keep the rich and powerful from looting the place, then we’ll do all right.

There has been a lot of talk lately about a ferry to Boston either from Halifax or Yarmouth. The logical place from which to have a ferry run to Boston is Shelburne. Because of its southerly location, Shelburne is closer than Yarmouth and 10-12 hours closer than Halifax.

Shelburne also has the third deepest natural harbour in the world; yes, the world. Shelburne is also close to shipping traffic coming from Europe and the Middle East.

It is such a shame that the third-deepest harbour in the world is so underutilized. 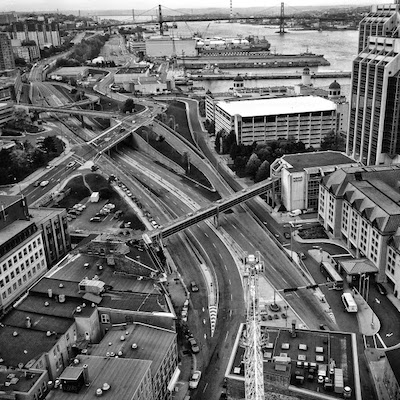 Which reminds me about an article I wrote for The Coast back in 2010, headlined “Tower Play: Did Halifax’s dream of being a world financial capital help Joe Ramia’s proposal, with an office tower on top, beat a higher-rated plan for the Cogswell Interchange?”

I still think there was something untoward about how everything lined up perfectly so that Joe Ramia could build the Nova Centre:

Through 2008, Joe Ramia had a fortunate run of luck with his Nova Centre proposal. A judge ordered the sale of the Midtown property to Ramia the day before he had to demonstrate ownership. The EOI evaluation team scored the competing Hardman proposal for a convention centre on the Cogswell Interchange higher, but failed to notify anyone about the scoring and didn’t move on to the next step in the process. The concept of using the Cogswell property as a land bank for downtown was adopted by bureaucrats without first being tested in the realm of public opinion. And, contradicting its public vote of just 10 months before, Halifax council secretly voted to deny Hardman the use of the Cogswell land for a convention centre, leaving Ramia with the sole viable convention centre proposal.

I’ve spent much time over the intervening five years trying to figure out exactly how this unfolded. I’ve chased dozens of false leads and a handful of leads that I think will eventually lead somewhere but are for now impossible to follow. I have some guesses, but nothing I can reliably report.

While I’m in the dark, I know that one person in particular knows all the ugly details of this money play: Andy Filmore. Filmore was at the centre of the decision-making around the Cogswell and wrote the secret report to council that caused council to vote at the last minute to not allow the interchange to be torn down so a convention centre could be built at the site. As a result, we’ve spent about a half million dollars shoring up the crumbling overpasses, and now, just seven years later, we’re preparing to tear them down.

I’m ambivalent about the privatization of space flight, but there’s no denying that Space X’s Falcon 9 landing is pretty cool:

The booster has landed. Spaceflight took a step toward the less expensive last week when the first stage of a Falcon 9 rocket set down on a landing pad not far from its Florida launch. Previously, most rocket stages remained unrecovered — with the significant exception of the Space Shuttles landing on a runway and their solid rocket boosters being fished back from the sea. The landing occurred while the Falcon 9 second stage continued up to launch several communications satellites into low Earth orbit. The controlled landing, produced by SpaceX, was the first of its kind, but followed a booster landing last month by Blue Origin that did not involve launching satellites. Boeing and SpaceX were selected last year by NASA to launch future astronauts to the International Space Station. The pictured rocket booster will be analyzed for wear and reusability, but then is scheduled to be retired. 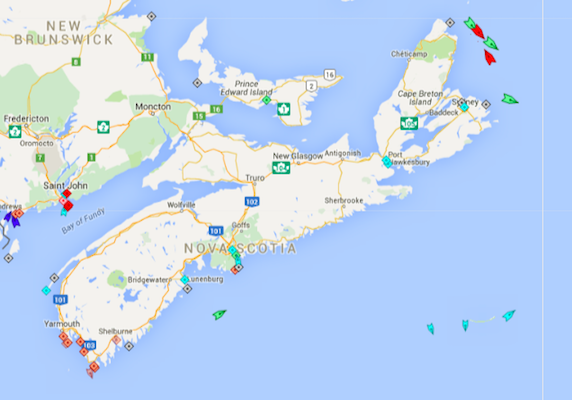 The seas around Nova Scotia, 8:50am Monday. Map: marinetraffic.com

I’ll have info about renewing subscriptions up later today.