You are here: Home / Featured / An alarming number of people have gone overboard from the cruise ships that visit Halifax

Two crew members have gone overboard from the Serenade of the Seas, a regular visitor to Halifax. Photo: Halifax Examiner

Lawyer Jim Walker points us to a recent (December) “man overboard” incident from the cruise sip Vision of the Seas. An investigation of the incident was conducted by the Commonwealth of the Bahamas because that’s where ship owner Royal Caribbean Cruise Line registers its vessels. The investigation found that a 24-year-old man from Mauritius, who worked as a pool cleaner on the ship, purposefully jumped off the rear of the ship as it traveled between Cozumel and Galveston.

Why is this Halifax news?

Because loss of cruise ship employees is a regular and ongoing occurrence. Back in 2012, Walker wrote about the problem, noting first of all that:

The difficult working conditions and low pay are almost unimaginable by U.S. standards: 12 plus hour days, 7 days a week, 30 days a month with no days off over the course of 6 to 10 month contacts, for as little as $550 a month for non-tip earning ship employees.

The result of such a grueling schedule is exhausted and demoralized crew members who are often isolated from their families whose birthdays and anniversaries they miss on a regular basis.

The mental health and emotional well being of crew members is not a topic that is discussed in the U.S.

Working conditions and mental health aside (but no, let’s not push them aside), another aspect of these person-overboard incidents is the lack of proper monitoring and equipment. In the case of the Mauritius man who jumped from the Visions of the Seas last December, notes Walker:

Royal Caribbean has not invested in the available automatic man-overboard technology (using heat sensors, infrared, motion detection and/or radar technology) which can send a signal to the bridge, capture the image of the person going overboard, and track the person by radar in the water. Instead, the ship will eventually review closed-circuit television images, conduct a search of the cabin on the ship, often not perform a search at sea, and belatedly notify the U.S. Coast Guard.

When we court cruise ship companies, we are courting everything that comes with them. We can’t wash our hands of responsibility and say that it’s someone else’s problem. 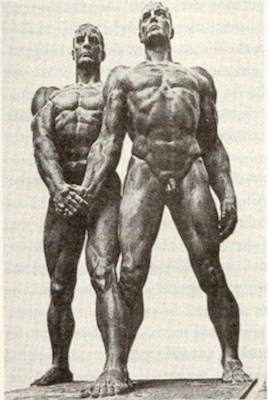 “A Jewish couple in Halifax say they won’t be returning to a local antique store after discovering it sells Nazi memorabilia,” reports Emma Smith for the CBC:

Peggy Walt was browsing Finer Things Antiques on Saturday when she noticed a glass case with badges and medals marked with swastikas.

“When you walk into an antique store you don’t expect to see something that is going to raise those kinds of feelings,” Walt said. “Profiting from this, it’s really not the right thing to do.”

Peggy Walt is a PR contractor who has somehow managed to figure out what events she is promoting might appeal to me, and how to package those in non-annoying emails. I wish she’d teach other PR people those skills.

I can’t imagine the pain any reference to her family’s loss would bring up. So let’s just acknowledge that.

Still, there are a broad range of reasons people collect memorabilia, Nazi or otherwise. Some people collect it because they are historians, professional or amateur. Some have art and design interests — Jordan Peterson has been rightly criticized for many things, but so far as I’m aware his Soviet art collection hasn’t been condemned on moral terms. Most people, I think, collect such things as simple curiosities — I found a “Smash Hitler!” milk bottle cap in my attic, and I’ve kept it around to show people. And sure, probably a small sliver of people collect Nazi propaganda because they are actually Nazis.

But when I saw discussion of Smith’s article on Twitter, the first thing I thought was “war trophies.” It’s a weird interest of mine, which I haven’t spent the time to properly investigate, but when I’m reading of past wars I often note the taking of war trophies by the victorious armies. Marauding soldiers have always literally raped and pillaged in the moment of the war, but the trophies extend the glory, such as it is, into the future.

The trophies can be quite disgusting — the men who comprised citizen militias in the slaughter that was the Indian Wars in the American west often cut off and kept the genitalia of their victims and brought them home as souvenirs. I was told that as late as the 1960s there was an American Legion in California that displayed scalps above the bar.

But the more mundane collection of captured enemy flags, weaponry, uniforms and clothing, maps and other effects, and yes, propaganda is far more common. Such collecting removes the direct reference to violence from war while at the same time reflecting the triumph of the participants. And then that value gets commodified and sold.

Here’s a 2012 BBC article about how the British military was dealing with soldiers bringing back trophies from Afghanistan.

I don’t have a point here.

Natasha Pace, reporting for Global, has the latest. (I just don’t have the stomach for it.)

“Coffee suppliers, bakeries, landlords, lawyers and several former employees have pursued the owner of Smiling Goat Organic Espresso Bar for unpaid bills amounting to tens of thousands of dollars, according to court documents and interviews with CBC News,” reports Marina von Stackelberg for the CBC. “A number of businesses in Nova Scotia are also refusing to sell to the Halifax café company.”

I can’t wrap my head around the Smiling Goat situation.

Running a small business is hard and takes a lot of work, but coffeeshops are, as small businesses go, relatively simple operations: product in, product out, control product and labour costs. Failure usually means either you are undercapitalized, or your rent is too high, or you’re a terrible manager, or some combination of all three.

I guess “expand your way out of your problems” is one solution, but I can’t see that there are many economies of scale gained going from two or three outlets to six or seven (Starbucks, on the other hand, has enormous economies of scale).

Still, there’s nothing shameful in starting a business and failing. Most new businesses fail — that should be on the top of every webpage of every organization shilling “entrepreneurship,” in bold and all caps: MOST NEW BUSINESSES FAIL! Failure can be the cause of much misery for the business owners (personal bankruptcy, loss of credit, ill-health, relationship problems…), but you gave it a go, and it didn’t work; nobody’s going to fault you for that.

We work business failure into our economic and legal systems, providing structures for bankruptcy and debt write-off. Most larger suppliers expect some level of uncollectible debt, and that expectation is built into pricing.

So nothing wrong with failing.

But what’s unconscionable is failing to pay employees, and treating them like dirt. The workforce is the foundation of every business; without those employees, you have nothing. Employees should come first, before everything else.

And employees are your ambassadors, bringing more return than any high-cost advertising campaign.

I just don’t get why you would want to piss off your employees.

Public Information Meeting (Tuesday, 7pm, Gym, Bicentennial School, Dartmouth) — First Baptist Church wants to rezone its property at Lancaster Drive and Woodland Avenue (where Highway 118 enters Dartmouth, the intersection Sam Austin wants to turn into a roundabout) so that it can “make another planning application for consideration of a development agreement for a multi-unit apartment building development with 100-120 units (proposed as two buildings at approximately five to six storeys 5-6 each).” I don’t know why the meeting is being held so far away from the site.

King’s Wharf (Wednesday, 7pm, Christ Church Hall, Dartmouth) — Fares & Co. wants to totally change the approved development agreement for King’s Wharf. The notice for the public information meeting doesn’t have much in the way of details, but explains that:

Key aspects of the proposal are as follows:

• Inclusion of two public parks and public access to the waterfront

Human Resources (Tuesday, 10am, One Government Place) — Byron Rafuse, the deputy minister at the Department of Finance, will talk about “Nova Scotia Employment Trends, 2008-2017.”

Public Accounts (Wednesday, 9am, Province House) — Auditor General Michael Pickup releases his Spring report this (Tuesday) morning, and will be asked about it at Public Accounts.

Spring Convocation, Morning Ceremony (Wednesday, 9am, Rebecca Cohn Auditorium) — ceremony for graduates in the Faculties of Engineering and Graduate Studies.

Computer Algebra approach for proving identities is an important tool in number theory and combinatorics. I am always interested in finding (or trying to find) algorithms for identities involving Bernoulli (and Euler) numbers. In this talk, I will introduce two sequences that related to this algorithmic approach. The first several terms of the sequences are easy to recognize, and even coincide with Bernoulli and Euler numbers, but the rest grows rapidly. Unfortunately, the formulas for the two sequences is still in the process of guessing, which will be left as an open question.

Humanities and the Sciences (Wednesday, 2pm, Archibald Room, New Academic Building) — Evelyn Fox Keller and Ford Doolittle are speaking. These might be the smartest people I know.